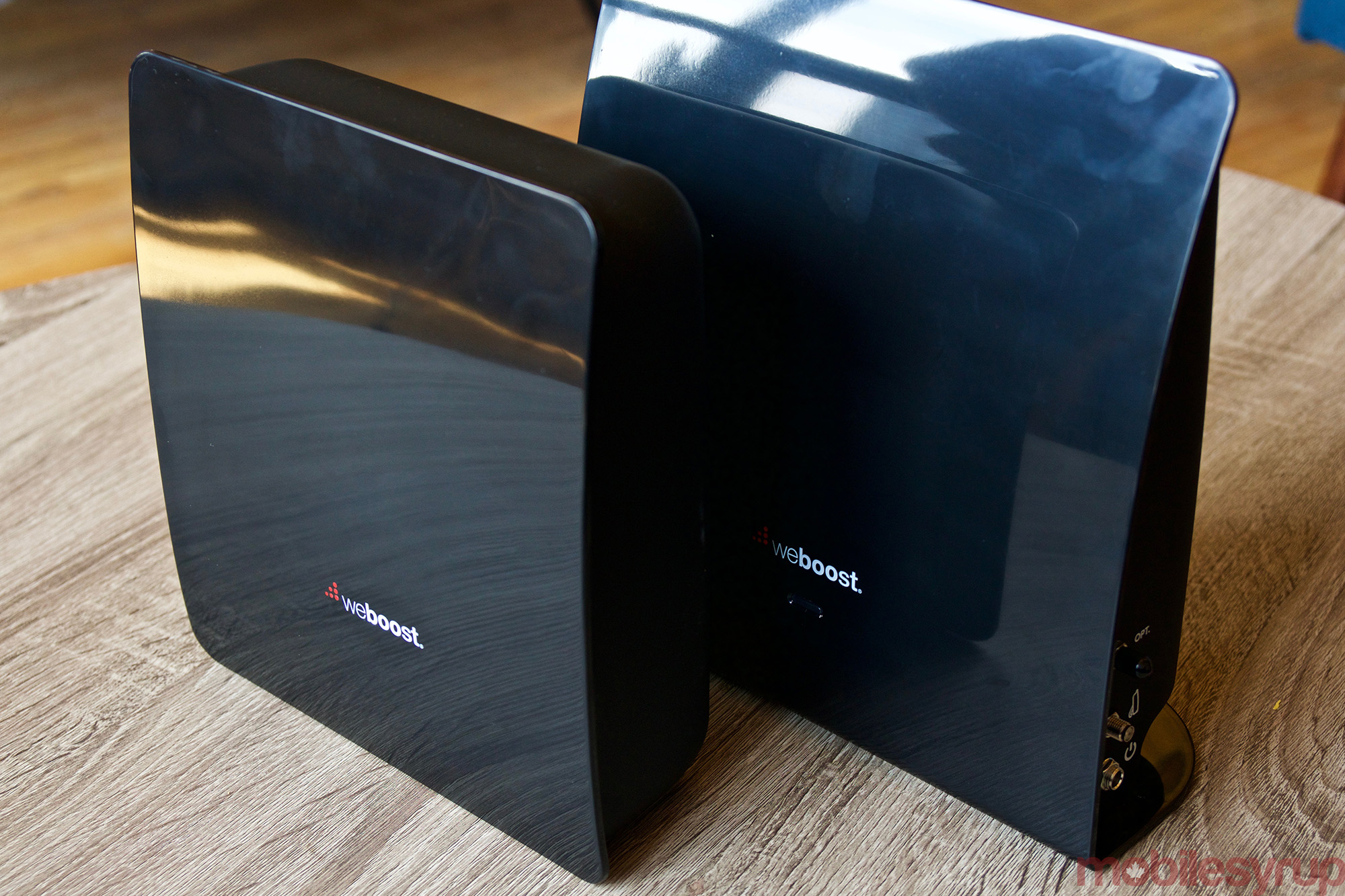 The cellphone signal booster that led to weBoost’s foundation was born of necessity.

Jim Wilson, CEO of Wilson Electronics, wanted to make sure his sick wife had access to a reliable wireless connection at their rural Utah home, so he used his expertise in manufacturing CB antennas to build a solution.

His fix: an antenna that found the strongest cellphone signal in the area and sent it to a booster device in the house which broadcasted the amplified signal.

The couple soon realized that desire for such a system extended beyond their own home and shortly after, in the 1990s, weBoost’s signal boosters began to go in to production. The devices have since done well enough that signal boosting has become Wilson Electronics’ main area of business. 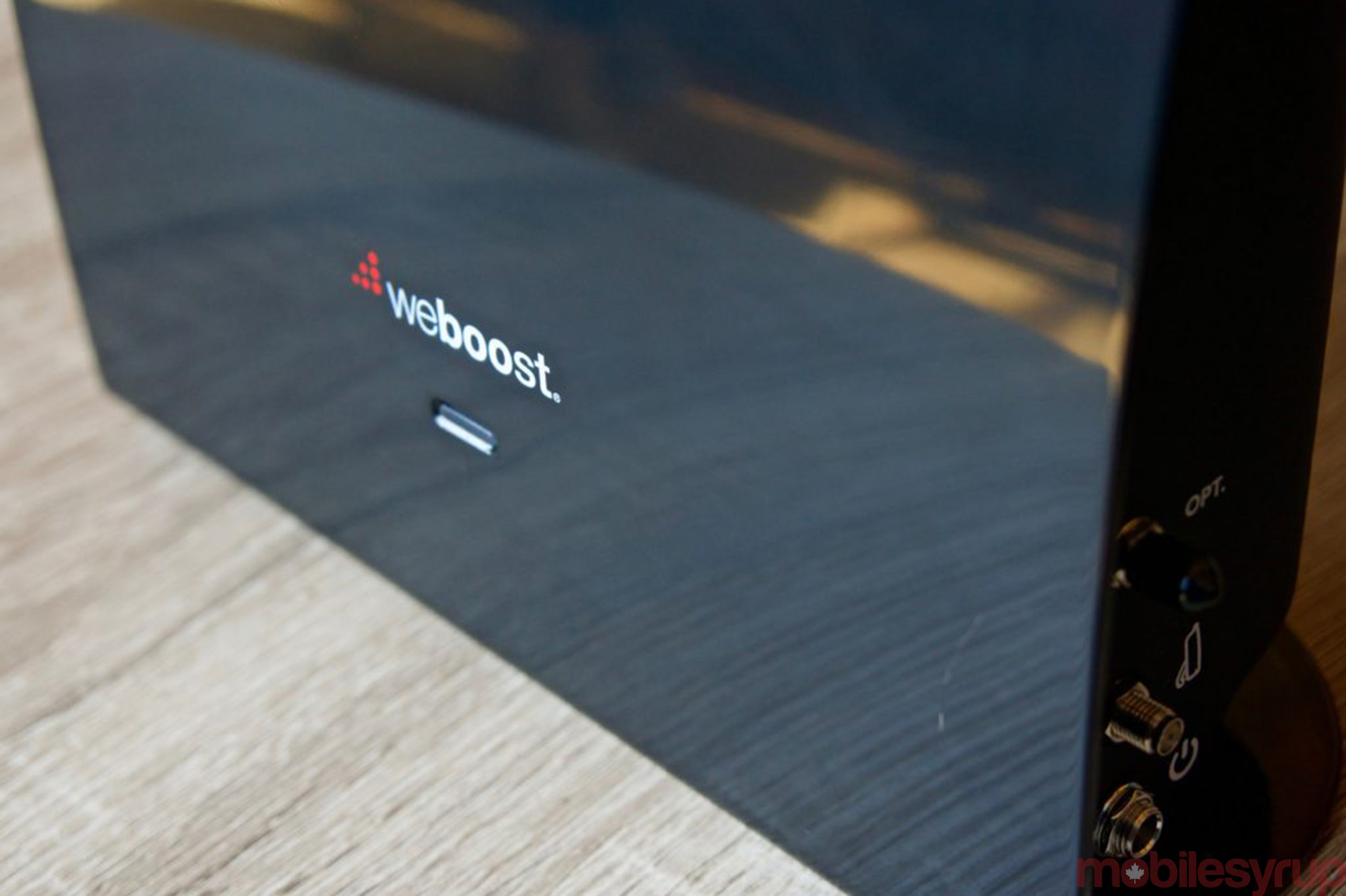 A representative of the company, Taylor White, says weBoost’s success is tied to the fact that it stands by its products.

“One of the things we’re known for is our warranty and customer service. Even years later, past the warranty date, we make sure we take care of our customers,” says White, adding, “It’s not a gimmick, it costs money, so if you pay for it you want to make sure it works.”

But while the solutions enjoy a reputation for integrity in online reviews, they also commonly consist of bulky equipment accompanied by a challenging setup process. Among the online reviews, the instalment process, along with the price – which can range to $1,429.99 CAD for larger-scale consumer solutions –  are noted as the chief detractors.

White says those issues are the main reason weBoost decided to launch a different sort of product this year. The Eqo, which debuted in North America last month online and at retail locations such as Best Buy, Canadian Tire and The Source, was designed to be simpler to use, better looking and less expensive than most of the  other products offered by the company.

Priced at $499 CAD, the Eqo comes in the form of two all-black boxes twice the size of most wifi routers. The devices are meant to provide a truly plug and play solution for an apartment or room-sized space of approximately 1,500 square feet of coverage. 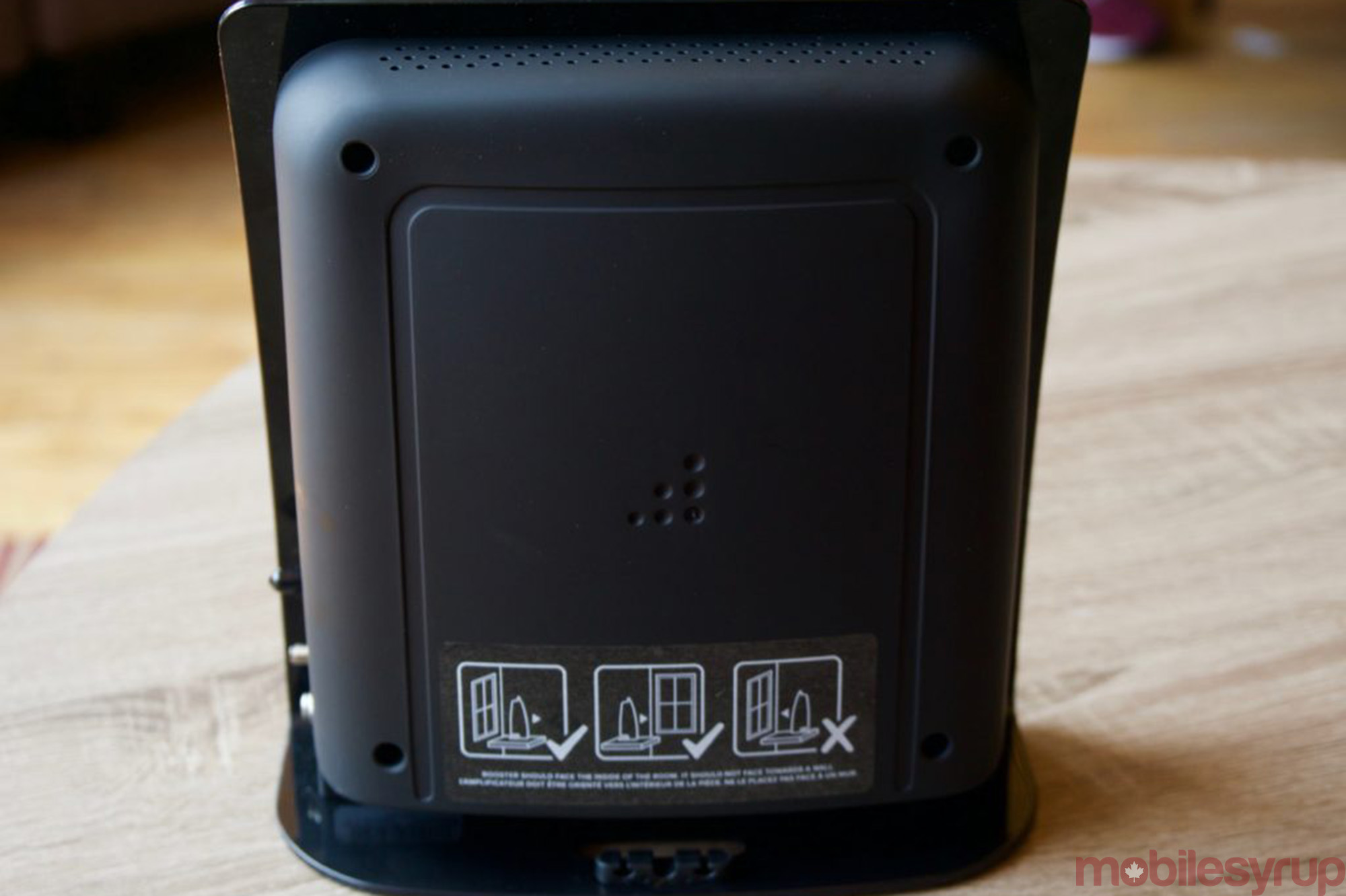 “All the other solutions are hardwired,” explains White, “But this one is mobile. You can easily take it with you, if you’re an RVer, or going on a vacation. And it works for everyone in the room, no matter what their carrier.”

I put the Eqo’s ease of assembly to the test with a late-night attempt that I honestly didn’t expect to be successful. Less than five minutes later I had completed my task and was surprised to realize that I had only looked at two pages of instructions with five short steps.

The first step entails using your phone to test where the wireless signal is strongest. To do this with an Android device entails navigating from settings to “about phone,” and then to signal strength and frequency. With an iPhone, using the Eqo requires the phone to enter test mode.

The signal strength is measured in dBm, or decibels above milliwatts. I used the downstairs of my house for the test, measuring every corner. The signal strength ranged from -107 to -100, where the latter number is the stronger signal.

That’s not a particularly healthy signal range considering the phone I was using ran on the Bell network, which is the most extensive in Canada, and I live in the LTE-saturated Greater Toronto Area. A solid signal strength is considered in the range of -60 dBm. 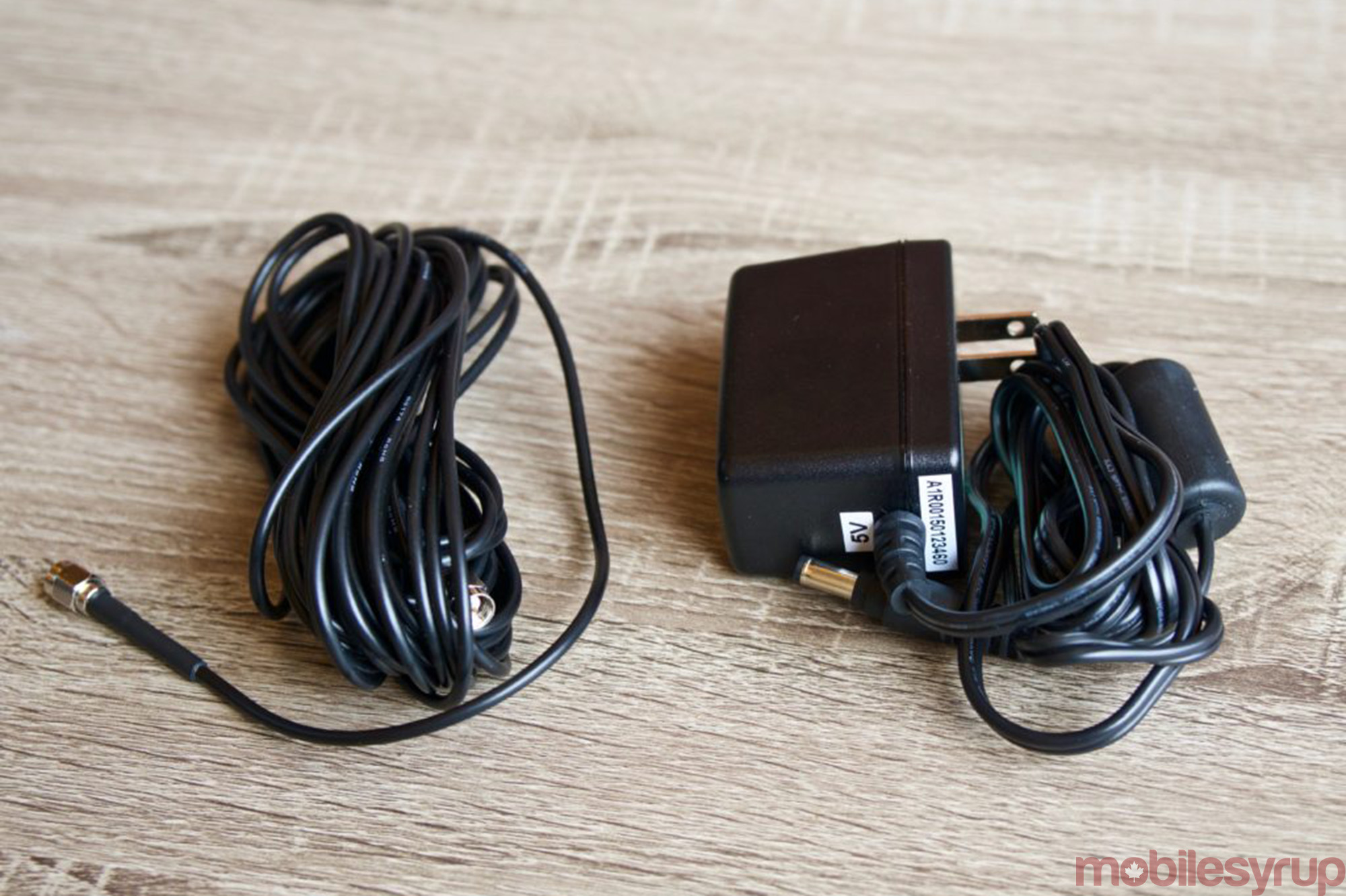 Once I had found the location with the strongest signal strength, I plugged one of the boxes, the antenna, in to the wall outlet. Then I put the other box in the area with the worst signal strength, an estimated 12 or 13 feet away. Though the instructions warn that one must position the two devices at least six feet away from each other, they must also be connected by a cable which restricts the distance between the two to a span of 25 feet. Besides that, it adds the logistical issue of where and how to hide the cord.

But though I was perturbed by the cable, I was immediately impressed by the results. In the location where I had set up the receiver box, the signal strength leapt from -107 to -76 dBms, a difference of 31 dBms total. When I played around with my phone I noticed a significant increase in speed.

Not enough of a difference to make me shell out $500, granted, and also nowhere near the full gain possible according to weBoost’s website, which reports the potential of a 70 dBm difference.

But the Eqo is not really designed for people with only moderately poor signal connections. It’s for those that have seriously unstable or nearly non-existent connections. In consideration of that, there are a few situations I can think of in which I would be very glad to have an Eqo.

In an urban location, it could be best used to amplify the signal of a less expensive carrier like Wind for a basement user and pay for itself in lower monthly bills. It could also be a solution for rural locations that don’t require heavy duty antenna equipment – a small house or apartment in a rural hamlet or town, for instance. 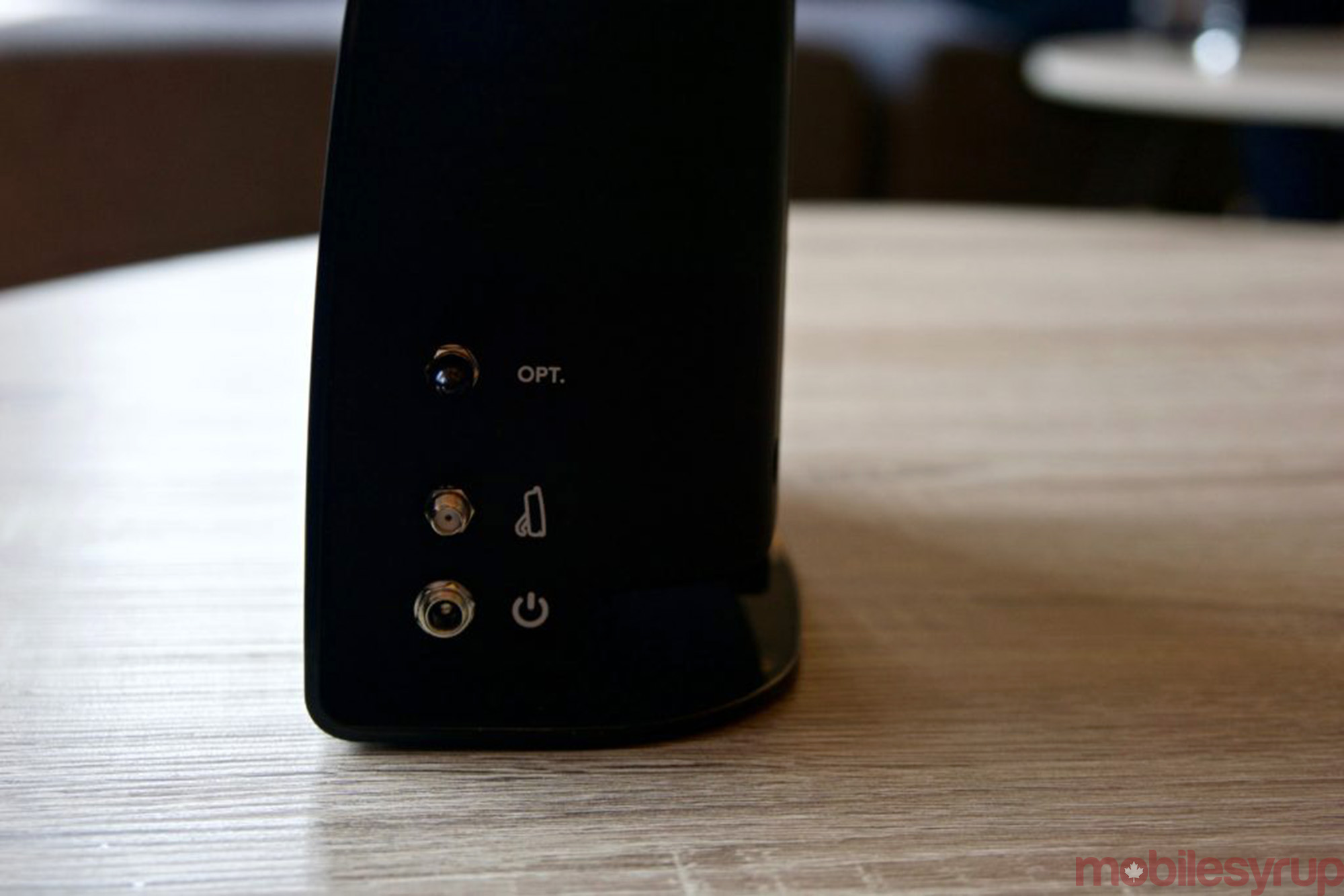 But even with compelling use cases, White notes that weBoost’s devices and signal boosters in general are not as well known in Canada as they are in the U.S., where they are more commonplace. Boosters have been employed in such high numbers in the U.S., in fact, that the U.S. created regulations in 2013 to control the use of “rogue boosters,” which cause issues with wireless infrastructure due to too high an output of power.

There is now a set of standards for output in place, and customers in the US must register their device with their carrier for better oversight. In Canada, however, signal boosters do not have to be registered with their user’s wireless carriers. At least, not yet.

White says weBoost is focused on bringing awareness of signal boosting to Canada, even launching a campaign called “Seize the bars.”

“The hardest thing for us is awareness,” said White. “Once people know we exist, it’s kind of a no-brainer.”