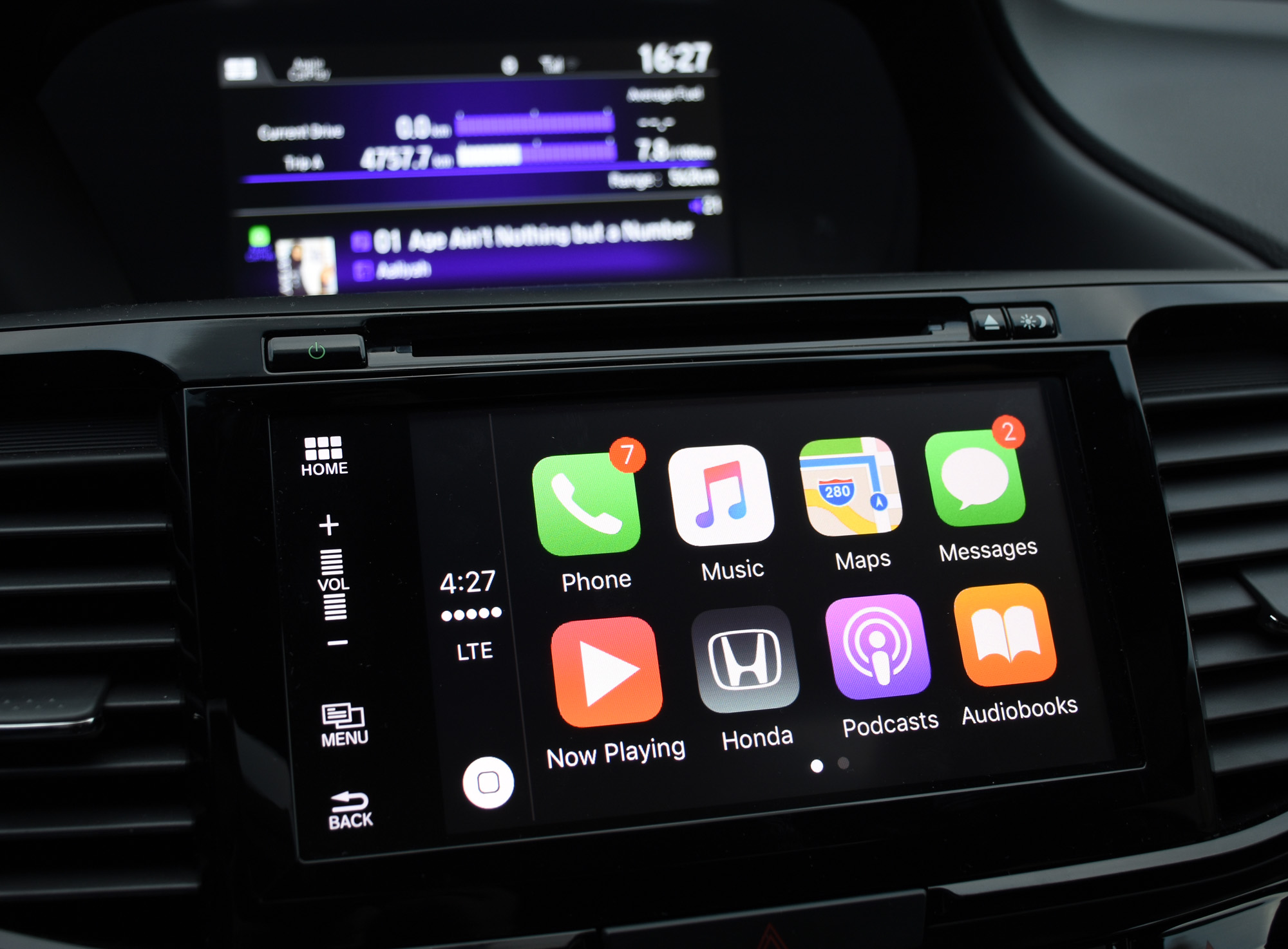 Car owners will have to wait till 2016 to see Apple’s CarPlay and Google’s Android Auto become more ubiquitous in next year’s fleet of vehicles, but for now, the pickings are slimmer, and Honda’s new 2016 Accord is among them.

As will be the case with every automaker, the two smartphone projection platforms are add-ons to the existing infotainment system. A key sticking point for them was to ensure that CarPlay and Android Auto always had an ‘out’ to go back to the main system menu — a compromise that really doesn’t seem so complicated in theory or practice.

Except there’s more to it than meets the eye. No car manufacturer would dare admit it publicly, but it’s an unsettling co-existence for the sheer fact that the two burgeoning platforms may have enough to co-opt the base system moving forward. 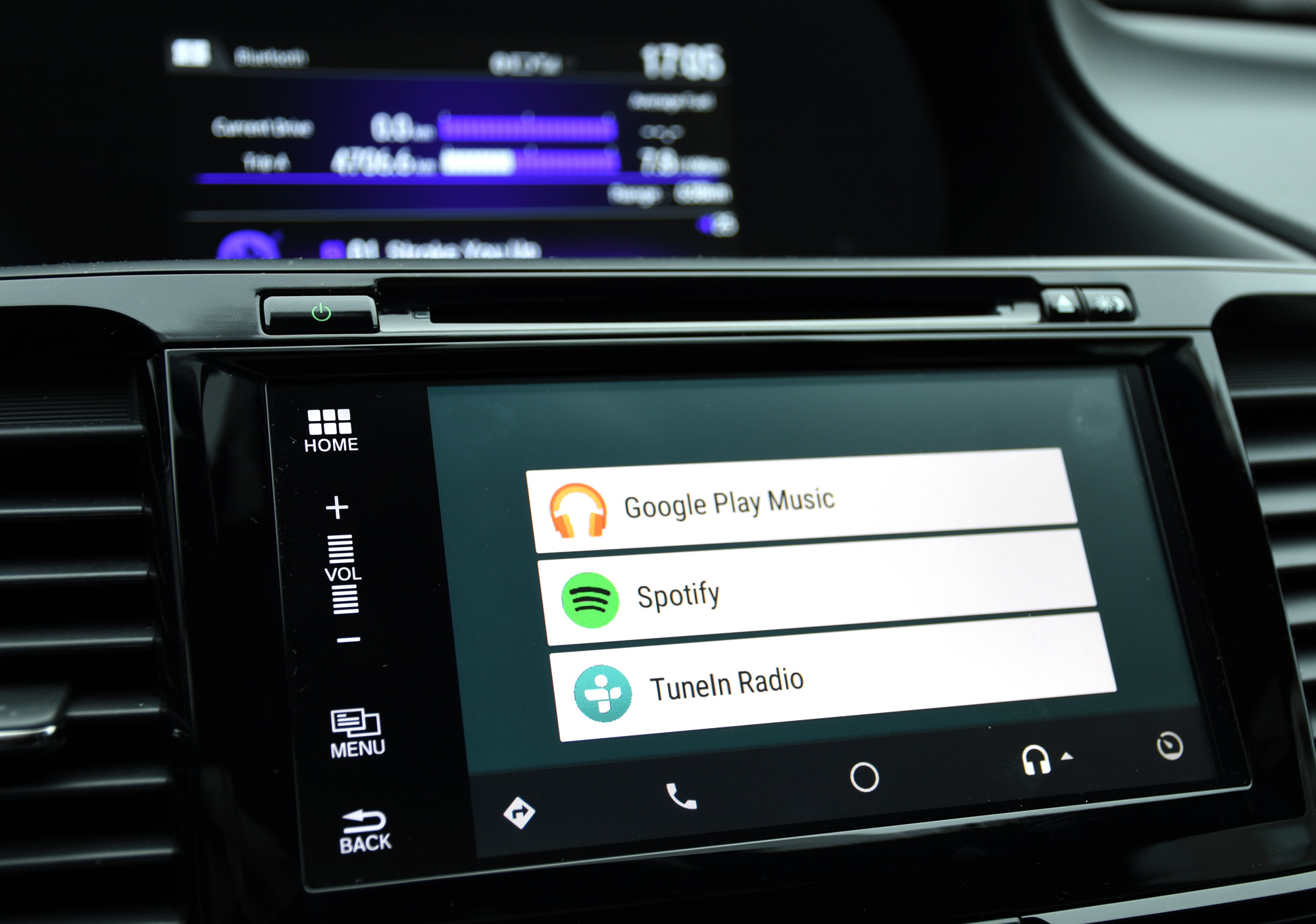 This proved to be the overlying premise to my testing process. Even more so because the 2016 Accord EX trim I drove for a week lacked a navigation package, pinning all mapping needs to the other platforms.

Given that navigation packages can usually add an extra $1,000 or more to the purchase price, the omission was an ideal way to gauge whether it would’ve been necessary or not. Having tested AcuraLink before, which is similar in concept, yet vastly different in design, HondaLink wasn’t as feature-rich as I expected.

It was also the first time I had tested CarPlay and Android Auto in a factory system, as all my previous experience was with an aftermarket head unit. 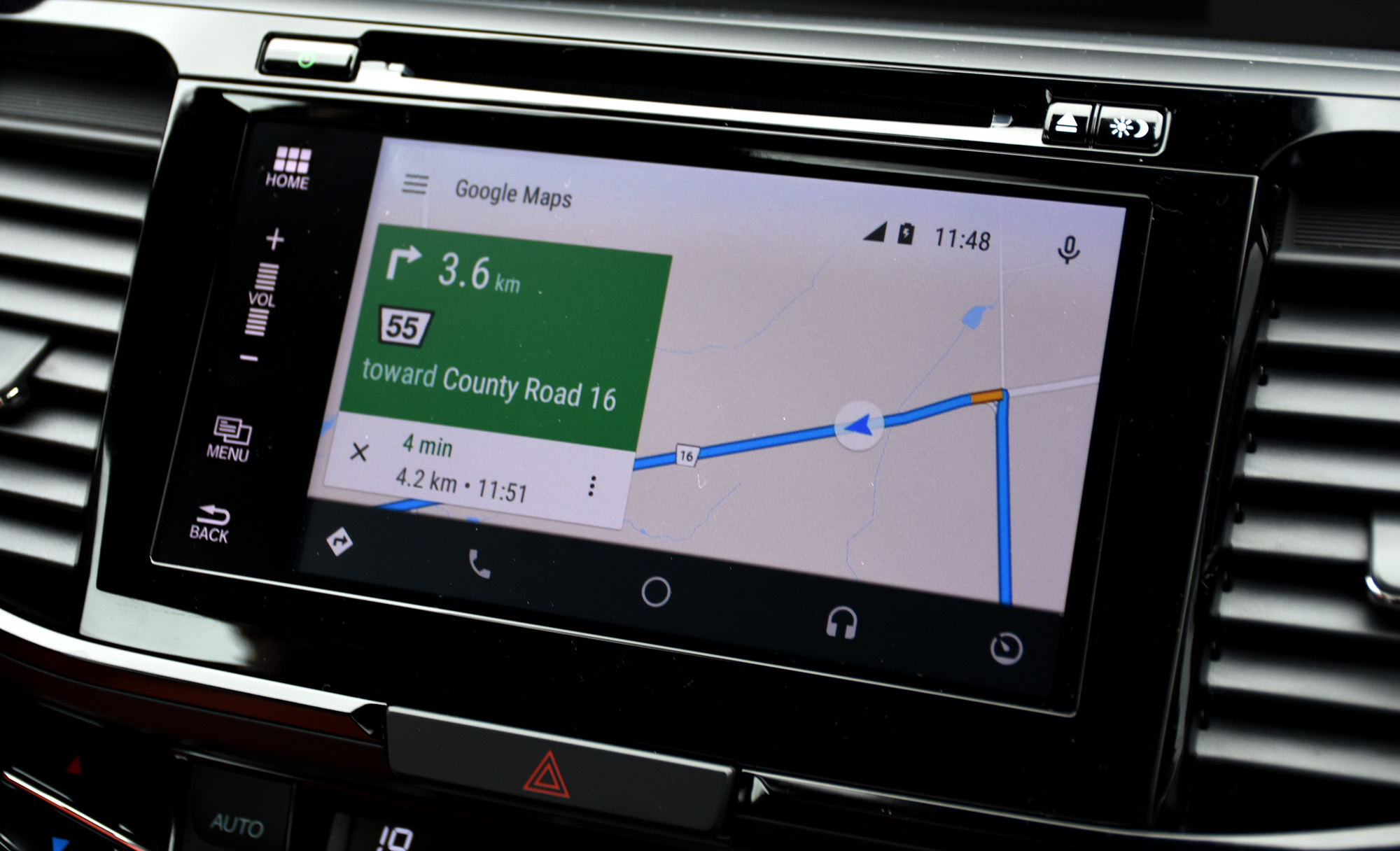 Not every Accord trim has them, but the EX has two displays; one 7.7-inch up top and another 7-inch capacitive screen below where drivers manually interact with the system features and options. Climate controls are all hard buttons with no integration into the system or the built-in voice activation.

Underneath is an open compartment with a dedicated USB port for smartphones. Another port for charging is in the centre console armrest, along with a 12-volt socket and Aux-In jack. Bluetooth connectivity is pretty standard, allowing for audio streaming without having to plug in the phone.

Like an increasing number of vehicles these days, the voice button on the steering wheel has dual functionality. A simple press brings up Honda’s own voice activation, whereas a longer press will trigger Siri or Google Now, depending on which platform is active.

Setting up CarPlay was considerably easier than Android Auto, if only because there are more steps in the latter’s case. The infotainment system is designed to recognize when a compatible iPhone or Android phone is plugged into the dedicated USB port below. From there, it walked me through the steps to add the phone to the device list and get everything working.

Android Auto can be confusing after the first step because it doesn’t clarify what a user needs to do to open the gates. For example, when I had Bluetooth turned off while connecting a Nexus 6P the first time, the setup went through most of the steps, yet fell short of displaying the main interface. As a tech-savvy user, it was a matter of forgetfulness, not inexperience, to go about it again with Bluetooth on. Nevertheless, downloading the Android Auto app and plugging in isn’t enough on its own to solidify a connection.

It’s a small gripe, I know, but it’s the sort of thing I can see frustrating drivers who wouldn’t necessarily know how to troubleshoot something that comes off as so simple to more knowledgeable users. 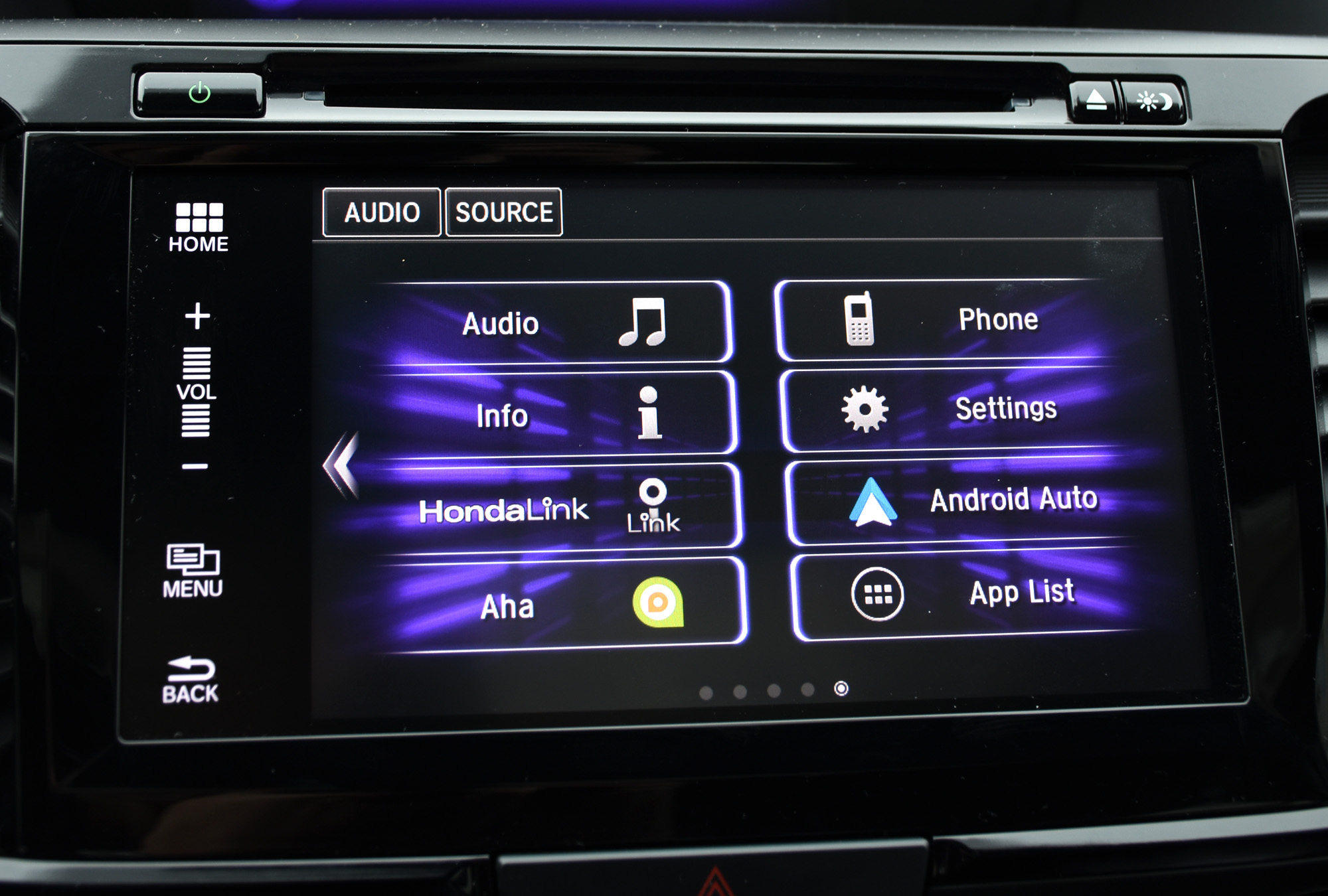 Before delving into CarPlay and Android Auto, I should note that Honda isn’t altogether different from its various competitors in how it tries to integrate smartphones into its system. A more refined menu is nice to wade through, and staples like Bluetooth streaming, music metadata and wired audio playback perform perfectly fine here.

It’s when the system keeps it simple that it excels, which was easy in this particular case because it came slightly neutered. The HondaLink app is very similar to how the AcuraLink one works, though I didn’t spend a great deal of time using it, in part because one of the app’s key features is pushing map route information to the car. Without navigation in my test vehicle, that wasn’t an option, so it really could only come in handy as a means to lock or unlock the car and set up maintenance appointments with a dealership. Too bad that it can take dozens of seconds before the car registers a command from the phone.

The HondaLink app does directly integrate with Aha, the only third-party app natively supported that Apple and Google haven’t yet included in their respective platforms. As I tend to defer more to TuneIn for radio, it wasn’t something I used extensively, and even if I wanted to, I’m not sure I would become a regular listener in the car.

Much of HondaLink comes off as barebones, as a result. Indeed, the irony here is that the system’s overall depth is supplied by platforms Honda has no real control over.

The inclusion of CarPlay and Android Auto dramatically alters how iPhone and Android users can utilize their devices in two key respects: apps and voice commands. They each open direct access to core features like calls, messaging and search, along with some popular third-party ones.

The integration is pretty seamless, too, and while the secondary display up top is a constant reminder that this is Honda architecture, the practical implication became more obvious over time: HondaLink was the background singer to a duet of stars in the forefront.

Siri and Google Now were made more effective by using the in-car microphone, improving comprehension in a way that would be frustrating otherwise. Those moments did happen though. There were times where either voice assistant was way off on what I was asking it to do, forcing me to ask again with slower annunciation. They are each sensitive to background noise, despite temporarily muting music to listen for a command. Timing is also everything, where a slight delay in saying something will render a search totally useless.

In one sense, Google Now had an advantage over Siri. When using the Nexus 6P, Google Now’s powers under 6.0 Marshmallow could be harnessed for good. I had it playing music from TuneIn and Spotify — nothing specific because there was no index to pluck from — yet getting into the app was already a step forward when Siri can’t open apps while connected to a vehicle.

It was navigation that showed how well both can manage. Voice searches made it very easy to find a destination, and Google Maps is really nicely laid out in Android Auto, regardless of whether it’s a card on the home screen or a map route in progress. Apple Maps may come in second place in that race, but it was fine for what I needed. Their presence all but negated the need to have Honda’s navigation features included. The one advantage, however, is that using in-car navigation in a system like HondaLink makes data irrelevant. If I were to use it every day for commuting, it wouldn’t matter how much data I used doing it, which is most certainly not the case for smartphone users with limited data buckets. 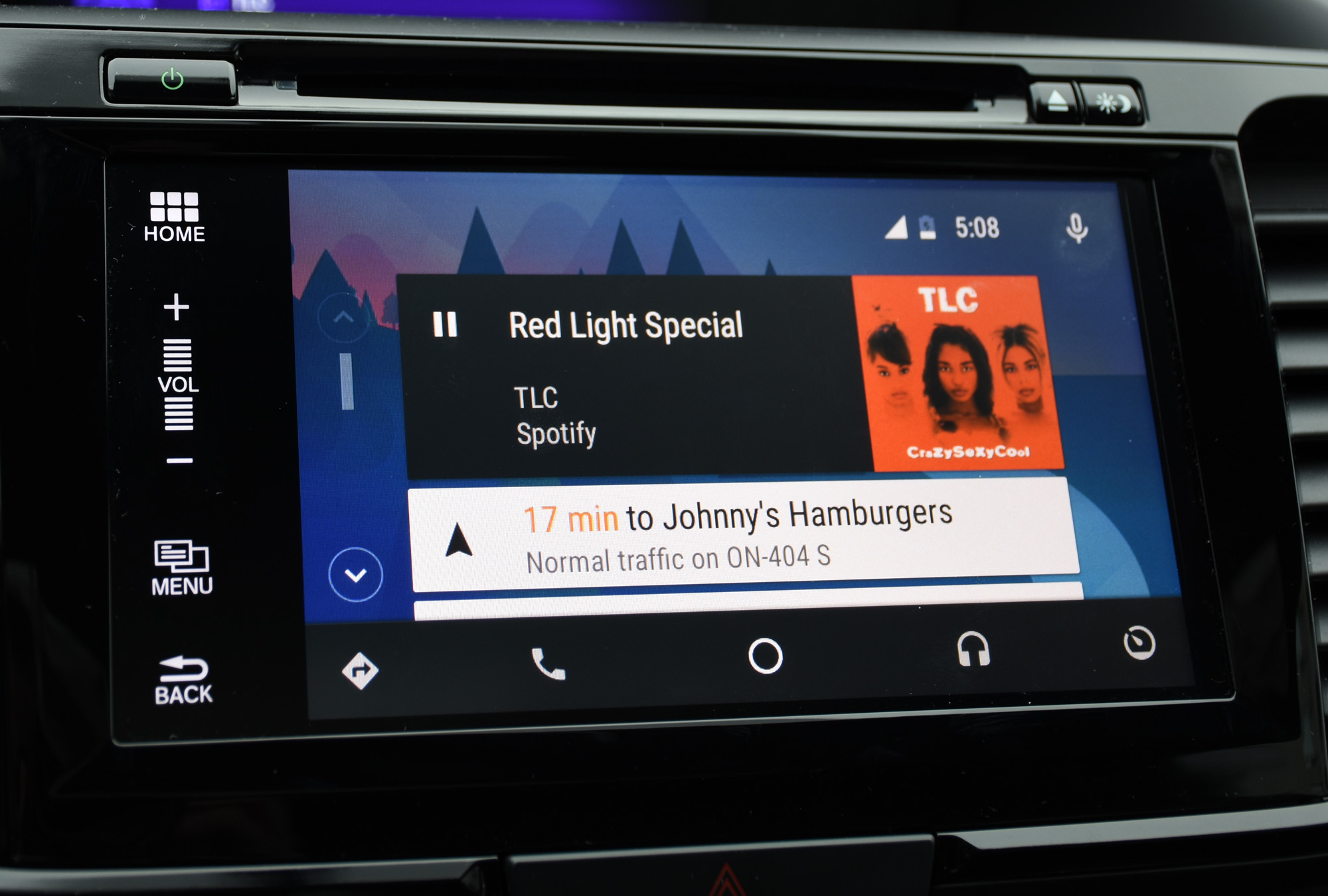 Bluetooth streaming is easy in any vehicle, so neither CarPlay nor Android Auto have the market cornered on music playback. Metadata will appear onscreen and playback controls work through the steering wheel, all using the existing infotainment system. The edge the two platforms cut is in how to access music from varying sources.

It’s still early days in the evolution of both CarPlay and Android Auto, but the general idea is the same, in spite of vastly different interfaces. With the exception of Ford Sync 3 and BMW’s ConnectedDrive system, there is no other in-car Spotify integration available. TuneIn, Rdio, Stitcher, MLB At Bat, Overcast — a smattering of apps that are available for either platform, or both. Navigating an interface that removes the need to use the phone is precisely what ‘hands-free’ is all about, and Honda simply wouldn’t have been able to do this without Apple and Google needling into its dashboard.

The difference is stark, and in having a basis for comparison with AcuraLink, the weaknesses inherent in HondaLink contrast even further.

But there’s still work to be done. Swiping through long playlists on either platform isn’t intuitive. Spotify on Android Auto has this bizarre glitch that only shows about 20 songs at a time, with the only way to browse further being to choose the first or last song on the list to dive down or go back. It’s a collision waiting to happen, unless I have a passenger handle the DJing duties. Alternatively, I would create a new playlist plucking songs from the larger playlist, or just put it on shuffle and hope for the best.

At least Google Now can dig into an app to some degree, so I can easily tell it to play something on TuneIn, and then navigate to what I want right after. It’s not a perfect solution, mind you, but it does the job well enough. Same with Spotify.

Some of the issues I noted with CarPlay in my previous review also come to the fore here, confirming that glitches lie at the feet of iOS. There would be random connectivity latency and loading inconsistencies with some of the apps, like Rdio and Stitcher. Only time, and future updates, will tell how much Apple cleans these up. 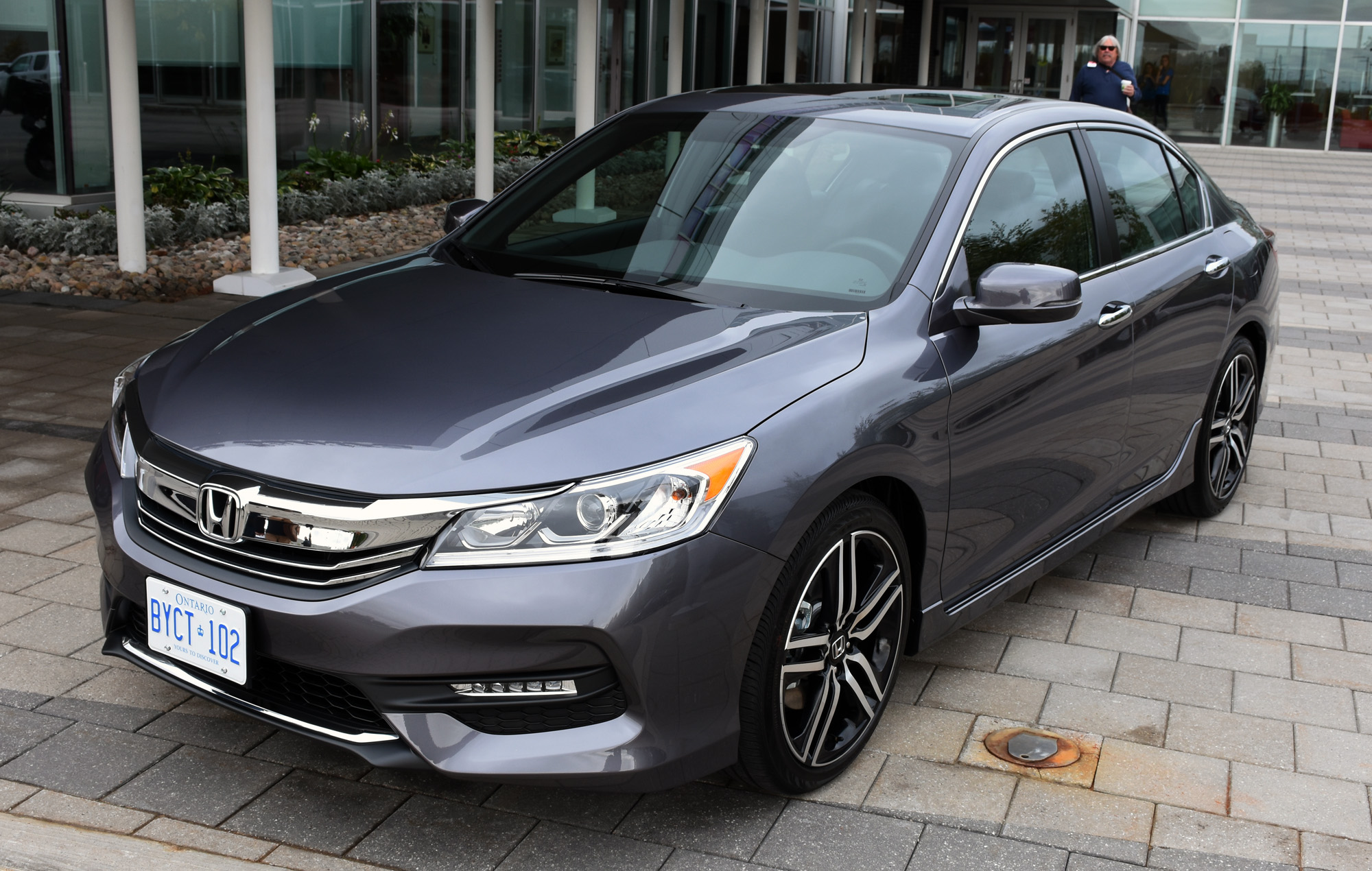 If Honda was concerned about the presence of the two biggest names in tech in its dashboard, it was right to be so. The hardware and overall design and layout, plus the HondaLink app, are internal pieces to a final result that plays second fiddle to the two stars sharing the spotlight. It’s not unlike how a Smart TV interface is ignored in favour of a streaming set top box that can offer more integration out of the box.

I didn’t come away disliking or lamenting a great deal about HondaLink, but that’s mainly a consequence of limited interaction with it. CarPlay and Android Auto were the primary conduits, not to mention the most likely to offer greater longevity than HondaLink’s features could.

This scenario looks to play out with other automakers as well. Where inferior and outdated features in base infotainment systems continue to fall behind, Apple and Google are already poised to pick up the slack and move things along.