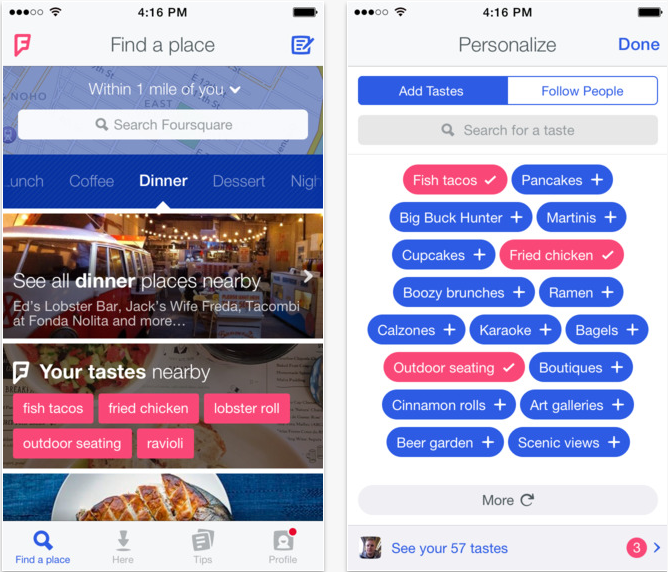 Foursquare is set to unveil part two of its internal app schism two months after it debuted Swarm, the new destination for check-ins.

Last year, the company was forced to make a decision about its future: would it continue to be the app that people used to check in to their current location, or would it be for discovering new places and making recommendations? The answer was difficult, but essential to push the Foursquare brand into a new place in the canon: split the app into two.

Swarm, the initial investment, has not paid off very well: users were both confused and frustrated to be pushed into an entirely new screen just to complete the one thing Foursquare had done for years. But the company says that users are growing used to Swarm in its single-purpose identity, and that’s a good thing, since the main app is set to be updated tomorrow.

The new Foursquare will showcase its new emphasis on discovery, which uses a database of millions of restaurants, bars, hotels, museums and other landmarks to compete with big names like Google and Yelp in the recommendation space.

The app will likely debut on both iOS and Android, but we’ll have to wait for confirmation. The company has promised updates to the Windows Phone apps, too, but there’s no word on when those will arrive.

Update: The new Foursquare app is now available for Android and iOS. Give is a whirl and let us know how you like it!