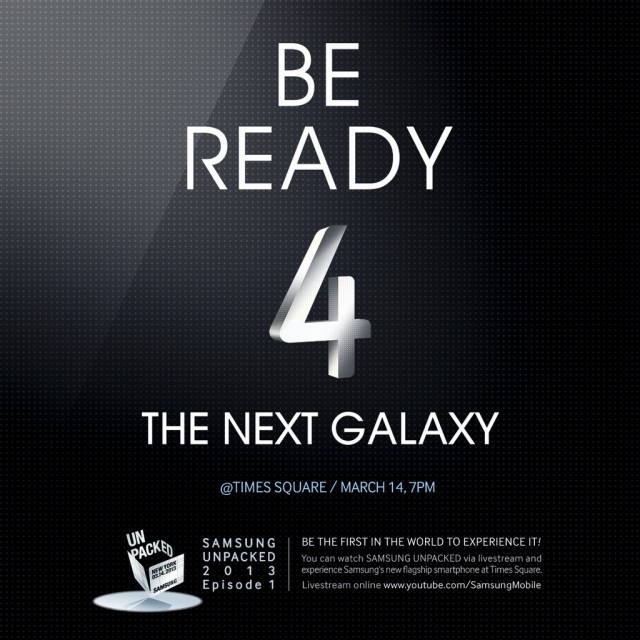 Samsung is prepping to wow the world on March 14th by unveiling the Galaxy S IV. This event will happen in New York City and if you can’t make your way onto the media list there’s a couple more options available. We already let you know that “The Next Galaxy” event will be streamed live via YouTube, but Samsung is taking it a step further.

A new image has been posted on their Twitter account that says everyone should “Be Ready 4 The Next Galaxy” and invites the masses to Times Square – one of the largest stages in the world. Samsung also notes that those who make the trek to Times Square can “experience Samsung’s new flagship smartphone.” This could mean that they might have some sort of demo booth where people can get a hands-on.

The specs of the GSIV have been rumoured for some time now: 4.99-inch Super AMOLED Full HD display, Exynos 5 Octa processor, 2GB of RAM, 13MP camera and a 2MP front-facing camera, running Android 4.2.2 Jelly Bean… but little has been said about the physical design. This reminds me of the GS III release as Samsung was incredibly secretive with that model and their designers “led a double life” protecting it from leaking online. Seems like this time around, with less than 2-weeks to go, they’re taking the same route.

However, taking a look at the above picture might reveal a couple design points. First, the dots and reflection might mean we could see a glass backing like the Nexus 4/Optimus G… or could simple mean that the plastic backing will have dots. In addition, the reflection on the number 4 is interesting. Perhaps viewing the display in direct sunlight will be a focus. Finally, why is the exclamation point slanted? This mimics the slant in the 4? It’s the only character out of context.

Everything will unfold on March 14th at 7PM.