Fizz has confirmed to MobileSyrup that the telecommunications company has lowered the price of its 1GB, 2GB and 4GB mobile plans.

The company sent out emails to customers on November 21st notifying them of the change in prices.

A user on Reddit shared an email he received from the telecommunications company noting that the 1GB Canada-wide plan has been reduced from $30 per month to $26 per month.

Another user noted that the 4GB plan has been reduced from $44 per month to $37 per month. 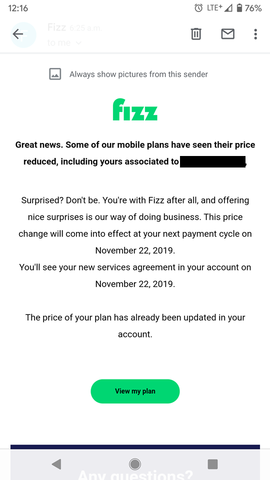 The email notes that the price change is subject to go in effect on November 22nd and that the cost has already been updated in customers’ account.

It should be noted that it seems that the price has not changed for customers who are on beta or stabilization pricing.