The Commission for Complaints for Telecom-television Services (CCTS) saw a 44 percent increase in the number of complaints it received, according to its mid-year report.

It noted that was a decrease in complaints from the 73 percent increase it got in the same reporting period a year ago.

Of the top issues brought to the CCTS’ attention, ‘incorrect charges’ landed the number one spot with 1,003 wireless complaints, out of 3,668 total complaints.

‘Non-disclosure of terms/misleading information about terms’ was number two with 1,200 wireless complaints, out of 2,716 total complaints.

‘Intermittent/inadequate quality of service’ fell to number three with 584 wireless complaints, out of 1,898 total complaints. 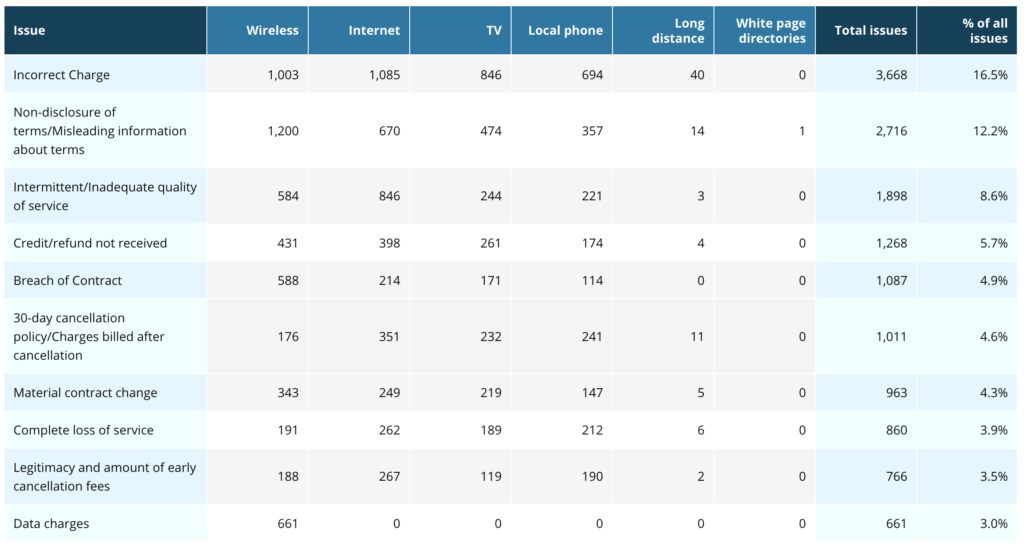 Of the number of complaints it accepted, the CCTS said it concluded 9,637 complaints and of those, resolved 8,877 complaints.

Montreal-based national carrier Bell had the most number of complaints with 3,034, representing 30.9 percent of all complaints accepted in the reporting period.

It is important to note though that this dropped by 2.4 percent, compared to the same reporting period a year earlier.

Rogers was number two with 915 complaints, representing 9.3 percent of all complaints accepted in the reporting period. It too saw a drop of one percent from the same period a year earlier.

Cogeco had 790 complaints, representing eight percent of the total complaints accepted. That amount grew 6.2 percent from the same period a year earlier.

Telus remained relatively the same and had 746 complaints, which represented 7.6 percent of total complaints. That amount grew by 0.1 percent from the same period a year earlier.

This year for the first time Shaw’s Freedom Mobile joined the top five list of carriers customers complained about.

The CCTC also reported on a number of complaints that are not covered by the Commission’s mandate.

The report does not specify the total number of such complaints were received.

It does note that ‘Customer Service’ issues related to wait times or rude representatives, accounted for 3,006 complaints, yielding it as the number one issue.

The CCTC is also mandated to investigate breaches in the Wireless Code of Conduct. In the specified reporting period, the report said it found 944 alleged breaches.

That number is down from 1,712 breaches the Commission received in the same reporting period a year ago. 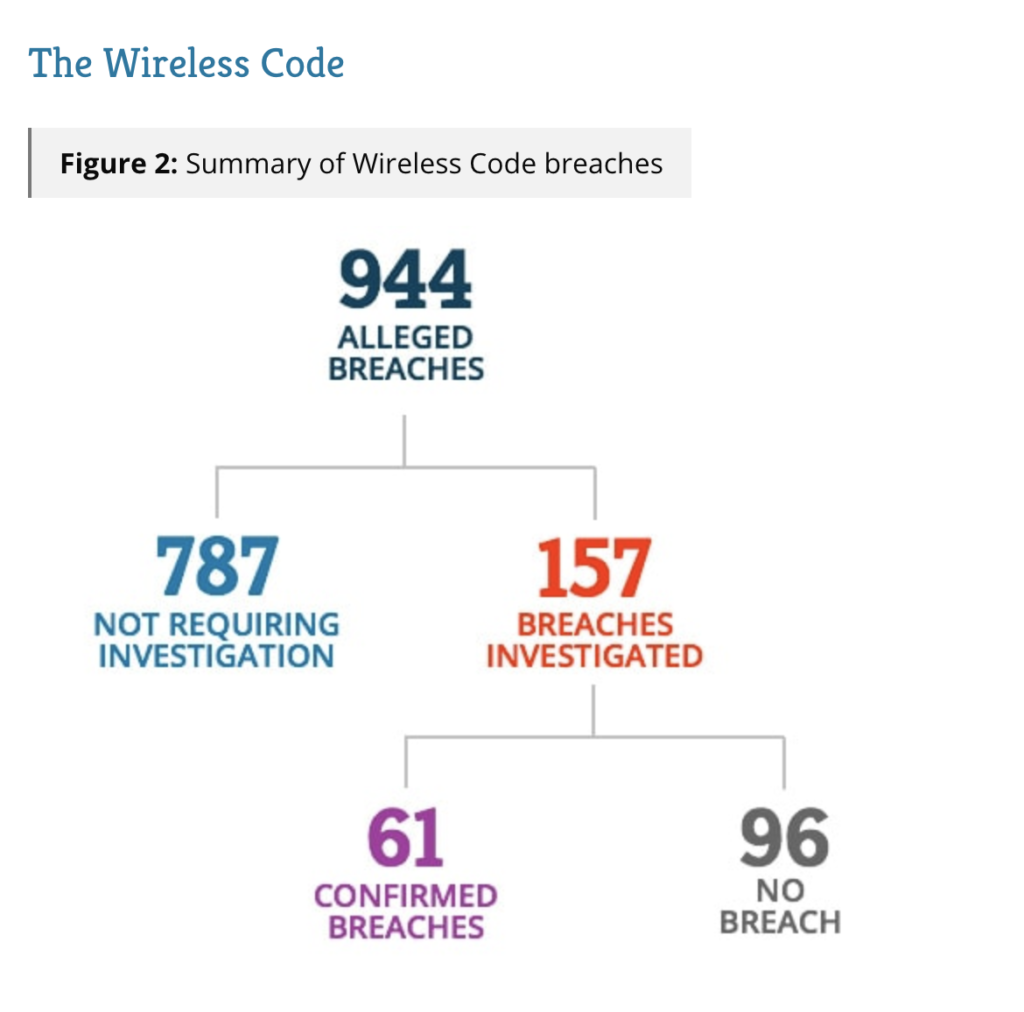 Of the 944, 787 did not require an investigation and 157 were investigated. Of the 157 that investigated, 61 were confirmed breaches and 96 did not equate to a breach.

Comments from the carriers

A Bell spokesperson reiterated that the compnay was happy to see a decline in the proportion of complaints.

“Despite having the most customers of all service providers, Bell’s proportion of overall CCTS complaints continues to decline year after year. In fact, Bell’s share of complaints declined more than any other service provider,” the spokesperson said in an email.

Rogers’ senior vice-president of customer care, Eric Agius, said in an email that all customers’ feedback is important for it to improve its service.

“Customer feedback is vital as we strive to offer our customers the best experience. We carefully listen to our customers and use their feedback to continuously improve,” he said in an email.

To give some comparison, Rogers’ complaints went down by 26 percent since 2014-15 when complaints totalled to 1,240.

Telus’ chief customer officer Tony Geheran said that the company was “disappointed to see the number of complaints increasing, including complaints specific to Telus.”

“We want our customers to know that we are listening and that we can and will do better. When a customer files a complaint with the CCTS, we embrace it as an opportunity to improve and work to resolve the issue,” he said in the email.

He added that Telus takes “every complaint seriously” and that in the last several months, the company has implemented new processes and tools to “further help our dedicated team better serve our customers.” That includes improving how fast customers connect with customer care representatives.

“We will not be satisfied until we see the number of complaints decline to zero. Over the coming months, our customers will experience even more positive changes that are the result of our continued listening and commitment to enhancing their experience with us,” Geheran said.

Freedom’s vice-president of external affairs, Chethan Lakshman, said in an email a similar response to Telus in that Freedom is excited about its growth but “disappointed” it has “not met the expectations of a relatively small number of customers.”

“We look forward to the opportunity to earn their business. We are always committed to doing better and we are building off a good foundation. Our internal measures show that customer churn and the number of complaints received over the past year have never been lower, and our care operations have never been stronger,” he said.

Update 02/04/19: The article was updated with comments from the carriers