Top Five announcements from the Apple ‘Gather Round’ Event

New iPhones, a new smartwatch and a renewed focus on health and photography 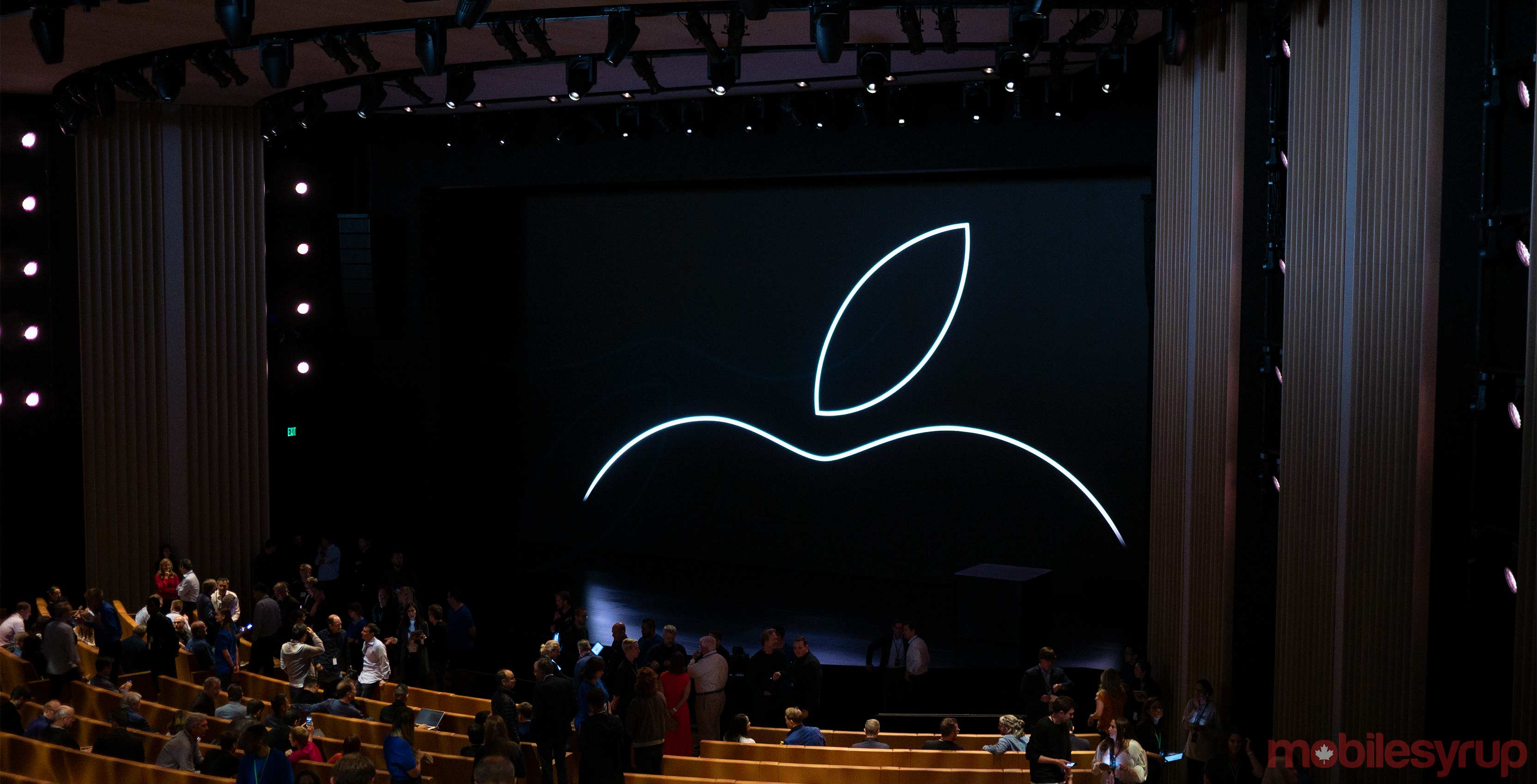 Apple hosted its ‘Gather Round’ event in its new campus in Cupertino, California on Wednesday, September 12th, 2018.

The company used the event to make a number of new announcements and show off a number of exciting new products. 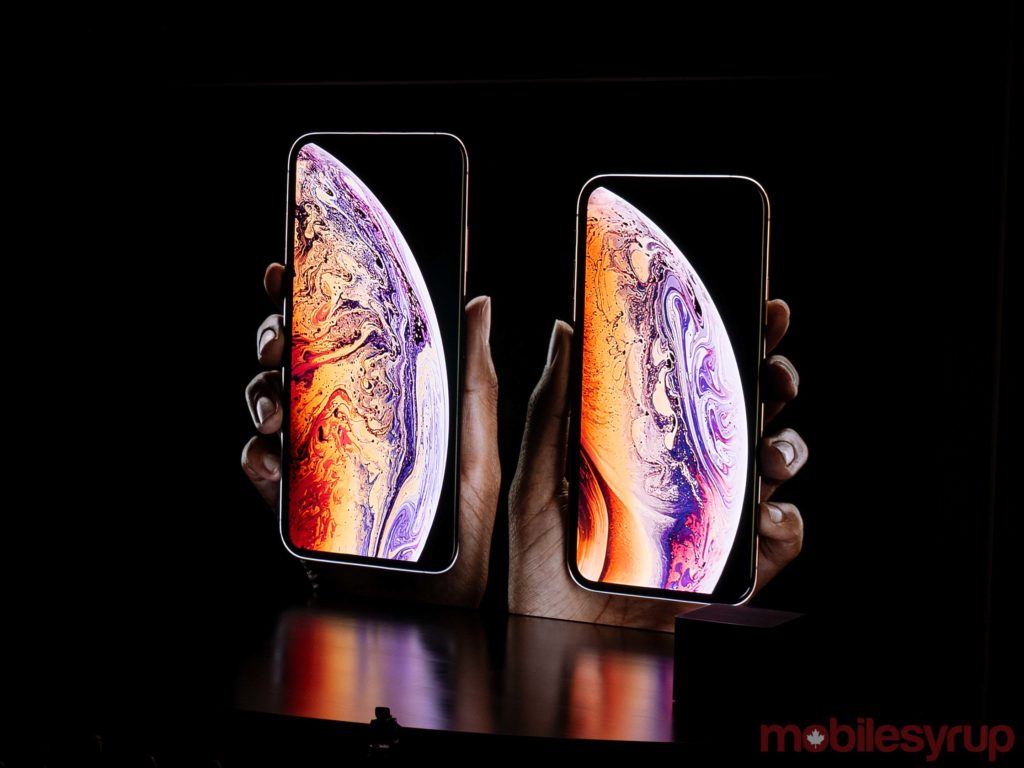 Apple today unveiled its new trio of smartphones, the iPhone XS and XS Max and the iPhone XR.

Customers can grab the iPhone XS and XS Max flagships with up to 512GB of internal storage — more than any iPhone ever. Furthermore, both of the company’s headliners feature Dolby Vision and HDR10 with an impressive 120Hz refresh rate — also a first for an iPhone. This should make both devices an excellent option for watching movies and playing games like the upcoming The Elder Scrolls: Blades.

The new iPhone XS Max features a 6.5-inch Super Retina OLED display, making it the largest screen ever on an iPhone. The new iPhone XS, meanwhile, sports a 5.8-inch display, similar to the previous iPhone X.

National carrier Bell is also allowing subscribers to pick up iPhone XS and XS Max devices with an eSIM, with eSIM support for Rogers expected to arrive sometime this year.

All three of these handsets feature Apple’s A12 bionic processor, as well as new camera features. 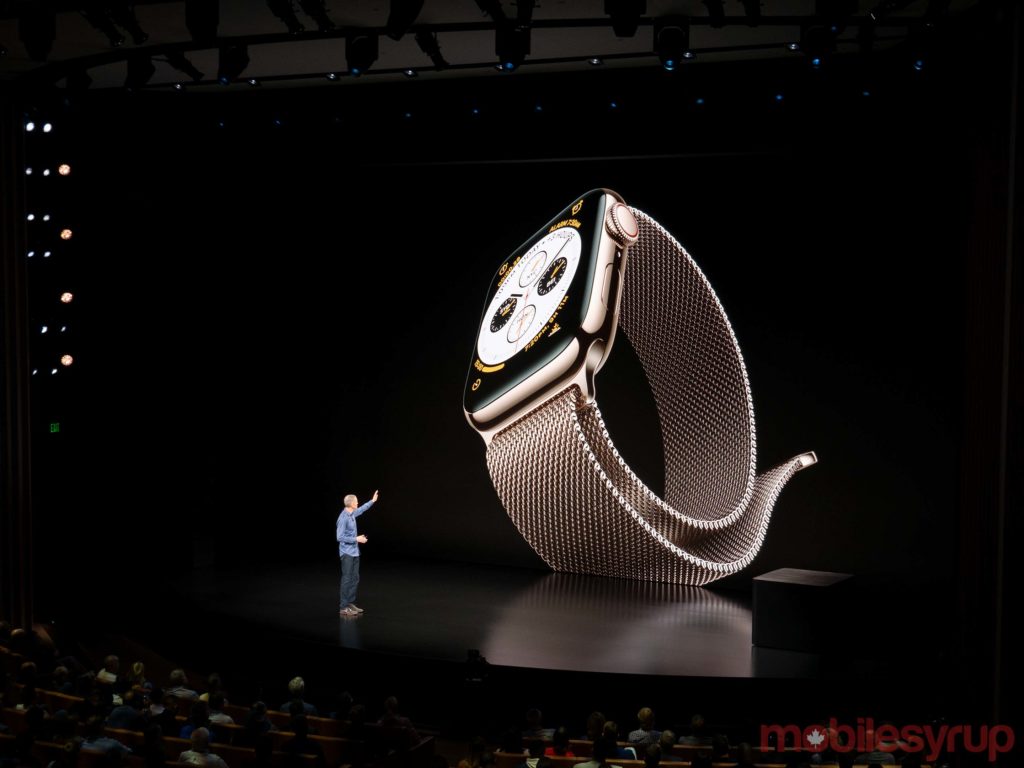 Apple’s latest smartwatch comes in 40mm and 44mm variants, with displays that are 35 percent and 32 percent larger than those found on the Apple Watch Series 3. These new, larger screens give the watch a subtle, but refined look.

The new watch has a number of other new features, but the new displays definitely steal the show, especially alongside the new gold stainless steel colour option.

Packed inside each smartwatch is Apple’s new S4 chip. The chip promises to offer double the performance compared to the chip found in the Series 3 smartwatch. There are a few other changes, including Haptic Feedback in the Digital Crown and a new back plate to improve wireless signals.

Even with all these new features and the larger display, the Series 4 is reportedly able to hold its charge for around 18 hours.

Apple also started selling 20 new watch bands to celebrate the new device and the arrival of the fall season. 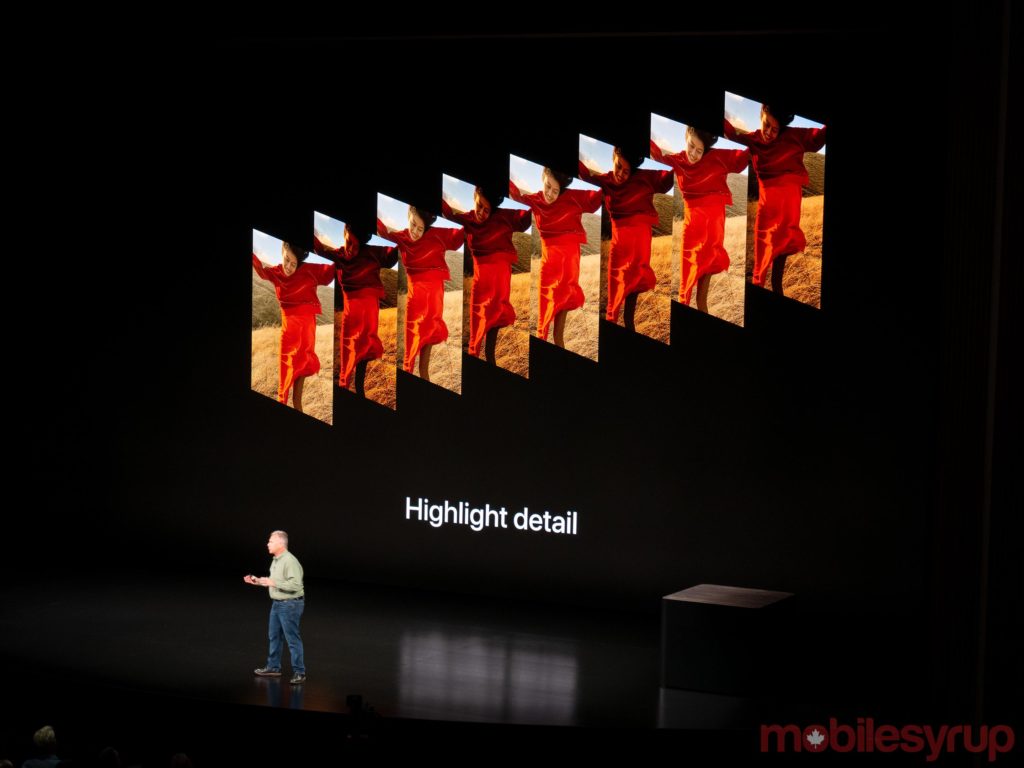 However, it’s the iPhone XS, XS Max and XR’s new software features that make the new phones stand out, with the new adjustable depth of field portrait mode being the most exciting.

While we’ve seen a similar feature in devices from Samsung, the shots Apple revealed showed off some of the most natural-looking bokeh I’ve seen from a smartphone camera. What’s more, the new iPhones will allow users to adjust an image’s depth of field after taking a photo.

We’ll have to see what kind of pictures the new iPhones produce in real-world use, but if there’s a feature I’m most excited to play with, it’s the new adjustable depth of field mode. 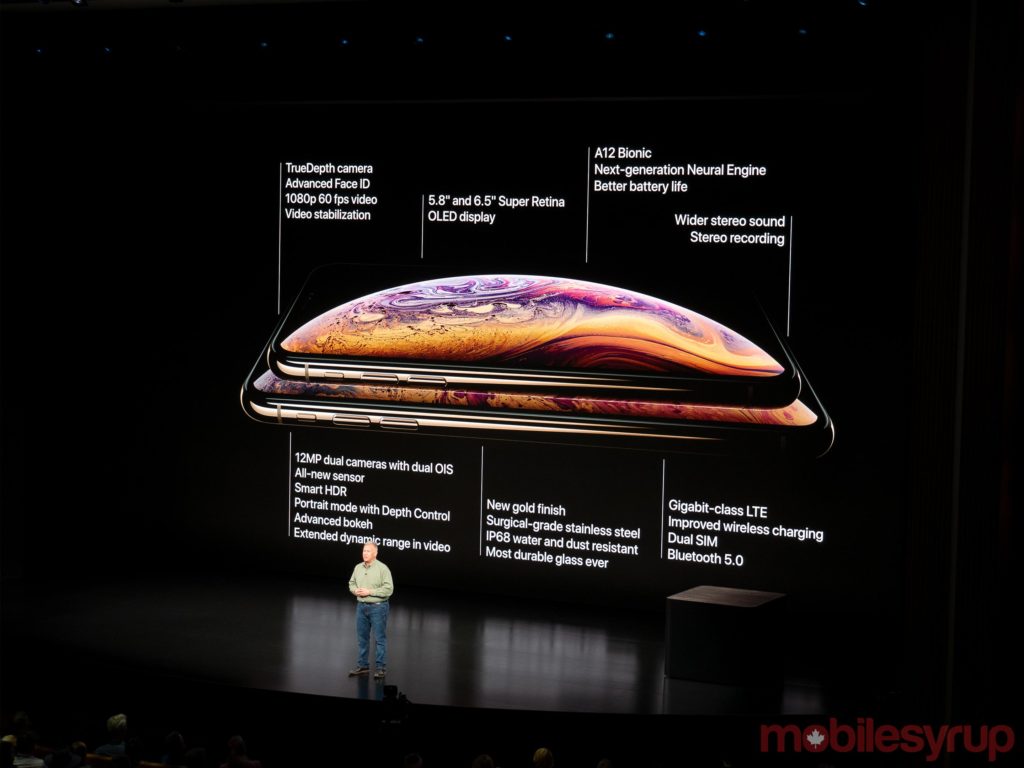 According to Apple, the A12 Bionic is not only the smartest and most powerful chip in a smartphone, it’s also the world’s first seven nanometre chip. Chinese manufacturing giant Huawei would no doubt argue with Apple’s marketing, but considering that the iPhone XS and iPhone XS Max will be launching with the A12 Bionic, the Cupertino computing giant can certainly lay claim to the title of “First company to launch a device with a seven nanometre chip.”

The A12 Bionic also features a neural engine that’s able to perform five trillion operations per second, while also ensuring that Apple’s Core ML machine learning platform is able to run up to nine times faster than on the A11 Bionic.

All in all, the A12 Bionic’s specs should mean that apps across the feature spectrum — ranging from casual web browsing to intense 3D gaming to augmented reality — can run smoothly and efficiently. 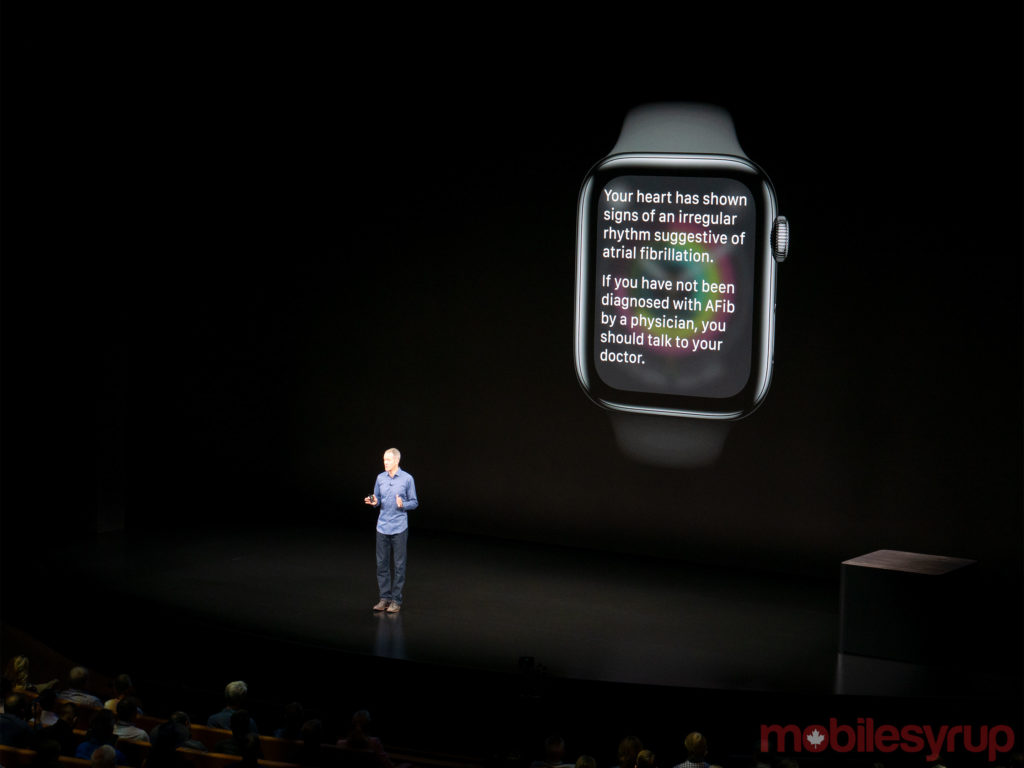 One of the more interesting items to come out of Wednesday’s Apple event is the company’s continued health push. Apple Watch Series 4 hardware enables a lot of new and important health options. Things like high and low heart rate detection, atrial fibrillation-detection and built-in ECG capabilities are all valuable parts of self-monitoring. The Apple Watch Series 4 now make it easier than ever to tell if something’s wrong.

Furthermore, improved sensors allow for more accurate exercise-tracking and even fall-detection. If Apple Watch detects you’ve fallen, it’ll give you a prompt to call 911 for help. If you don’t move for a minute after falling, the smartwatch will make the call for you and alert emergency contacts.

Perhaps more than anything else announced at Apple’s Gather Round event, these new health features have the potential to meaningfully affect the way people care for themselves.