Android Pie, which launched on Monday, August 6th, brings a number of new features and AI improvements to many aspects of Google’s mobile operating system. Overall though, the update makes Android a little easier to use.

Google shared many of these features at I/O back in May, but now they’ve been finalized in the public version of Android P. Currently Google Pixel and Essential phone owners can download the update and try out the software for themselves. Other devices that are part of the Android P Beta will will be able to get the update soon, says Google.

Google is getting ready to ride the next trend in smartphone use with Android P’s ‘Digital Wellbeing’ suite of features. The idea behind this feature set is to help individuals use their phones in a more responsible way by tracking when they interact with their device.

It tracks how long the user spends in each app, as well as how long they’ve been using their device. Moreover, users can go back and look at their phone usage from the past. The dashboard also shows how many times the user has unlocked their device in a day.

In addition to all of the usage tracking, the dashboard lets the user set limits on their apps so they don’t overuse them.

Some of other new features fall under the Digital Wellbeing umbrella too, but the most important one is the Dashboard. Apple has a similar feature called ‘Screen Time’ that’s coming out in the fall alongside iOS 12. 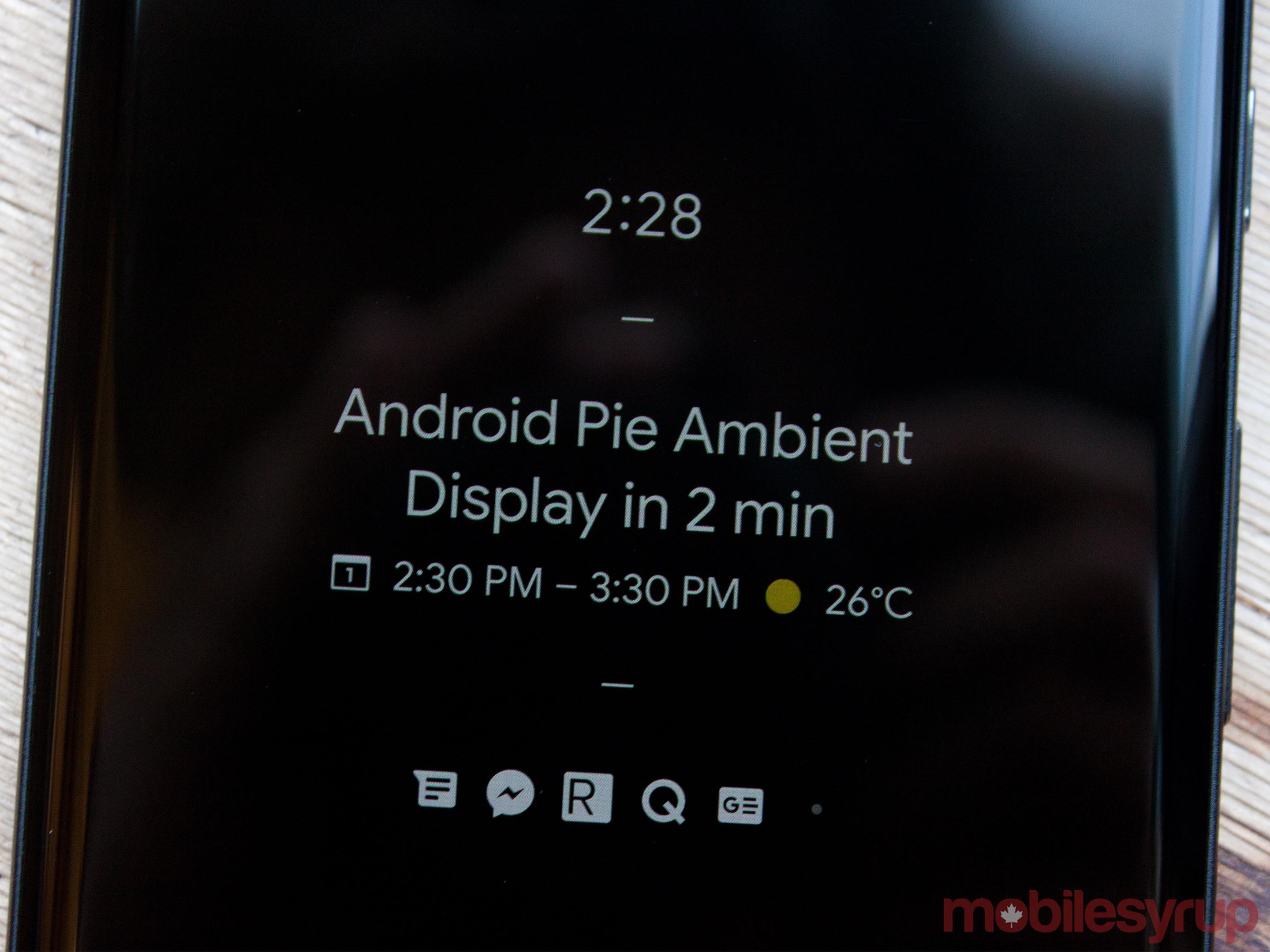 With Android Pie, Google has also updated the Pixel lineup’s ambient display functionality. The new version displays the phone’s battery percentage along the bottom of the screen so users don’t have to wake the phone to check if it needs a charge.

The update also adds location-based weather and a single upcoming calendar event to the screen. This gives users some contextual information about their day.

It’s unclear if this little tweak will roll out to other phones. Since the manufacturer’s sometimes make changes to this feature, it’s going to be hard to tell until more manufacturers support Pie. 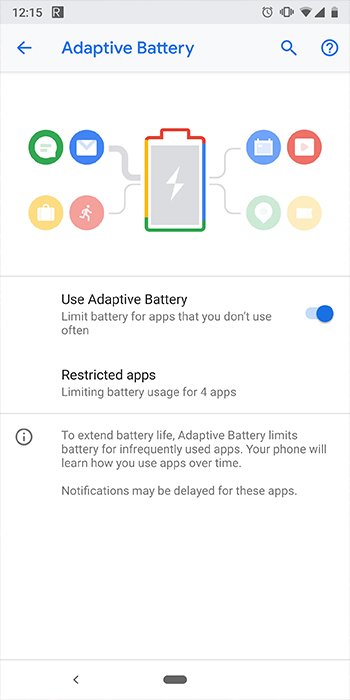 While it may not be a feature you’ll often directly interact with, Adaptive Battery may just be the most important advancement in Android Pie. Adaptive Battery utilizes a number of techniques to optimize battery life on Android devices.

App Standby Buckets, for example, use AI to categorize your apps based on usage. Apps you use more often can access more system resources, whereas apps you don’t use often are restricted. This can contribute to better battery life.

#Android9 is built with artificial intelligence at its core, enabling new features like Adaptive Battery and Adaptive Brightness. Rolling out now on Pixel. pic.twitter.com/sWRTlHNm6E

Additionally, Android engineers worked on a number of under-the-hood improvements. These small changes add up to big battery savings. You can read more about what they specifically did here. 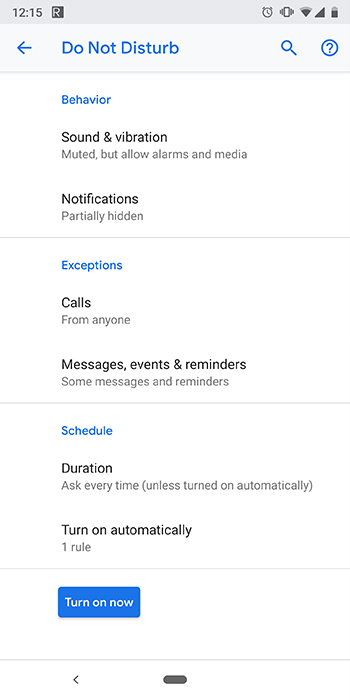 Android’s Do Not Disturb has seen a number of tweaks and changes through the last few iterations of the operating system. However, Android Pie really nailed it this time.

DND now features a number of handy tweaks to really customize the experience. Along with more robust scheduling options, DND features new controls for sounds and media as well as notification options.

For notifications, you can select from some pre-made options or customize your own restrictions. Users can choose to hide notification icons from the status bar or even hide them from the notification shade entirely.

Overall, the new DND is incredibly powerful and useful for getting rid of distractions.

Slices are small sections of apps that help the users do things without changing apps. An example of this feature would be booking a hotel directly from Google search.

These ‘Slices’ work similarly to Google’s instant app framework, but they’re overlaying the technology of the app with Google’s design. This idea is really exciting since it should make accomplishing tasks a lot quicker and better looking.

This feature isn’t launching until the fall similarly to the Digital Wellbeing dashboard, but when it does might be one of the most notable features added to Android this year. 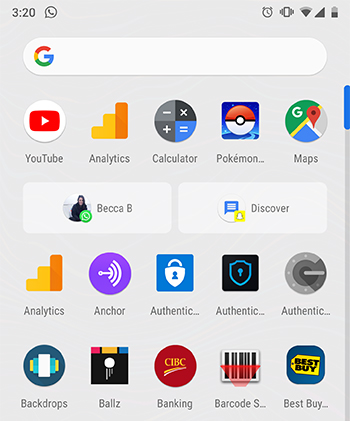 Actions are smaller bits of information that Google can search for inside of apps. If a user looks up the name of a movie in Google Search then they’ll get presented with some predictive search results, along with options to buy movie tickets from Fandango or to watch a trailer on YouTube.

What makes this different than regular search results is these app actions will link into the users’ app, or maybe even an app Slice, instead of just a website.

Actions also show up as shortcuts in the app drawer for common things you do. These can be direct links to someone you message frequently or part of an app you use often.

This should make it easier for people to utilize Google Search on their phones since it will now search through apps on the phone instead of just web results online. 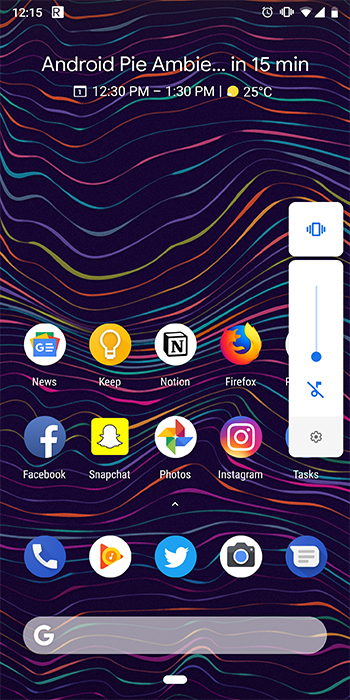 Android Pie features a number of small but useful changes too. For example, Google adjusted the volume control slider. It shows up on the right side of the screen now, right next to the physical volume buttons. This makes the slider easier to use.

Furthermore, it adjusts the media volume by default, with quick options for mute, switching between ring, vibrate and silent, as well as a button to go to the settings menu.

Android Pie also updates how rotation works. Even if you lock the rotation of your device, you can still turn the screen. For example, if you turn your phone sideways to watch a video, a rotation button pops up beside the home button. If you tap it, your screen will rotate. This handy feature lets you have more control over when your phone rotates. 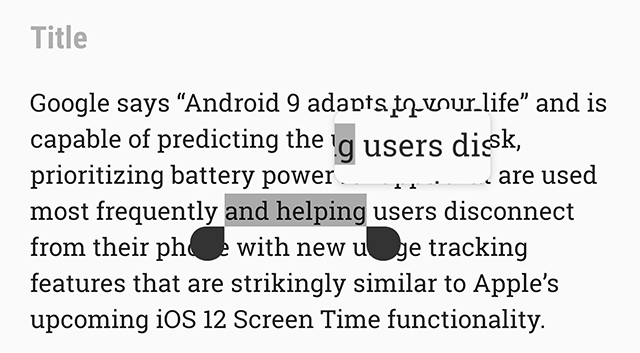 Editing text has never been easy on Android and for all of us that can’t spell, editing a tweet or a text message using Android’s old cursor design was a nightmare.

Google is attempting, once and for all, to solve this problem with Android Pie. The update changes the cursor from a little button you had to tap and drag around to a magnifying glass.

The control scheme to select text hasn’t changed, but Android users will start to see a magnifying glass appear above or below the text they’re selecting so it’s a little easier to see what you’re doing.