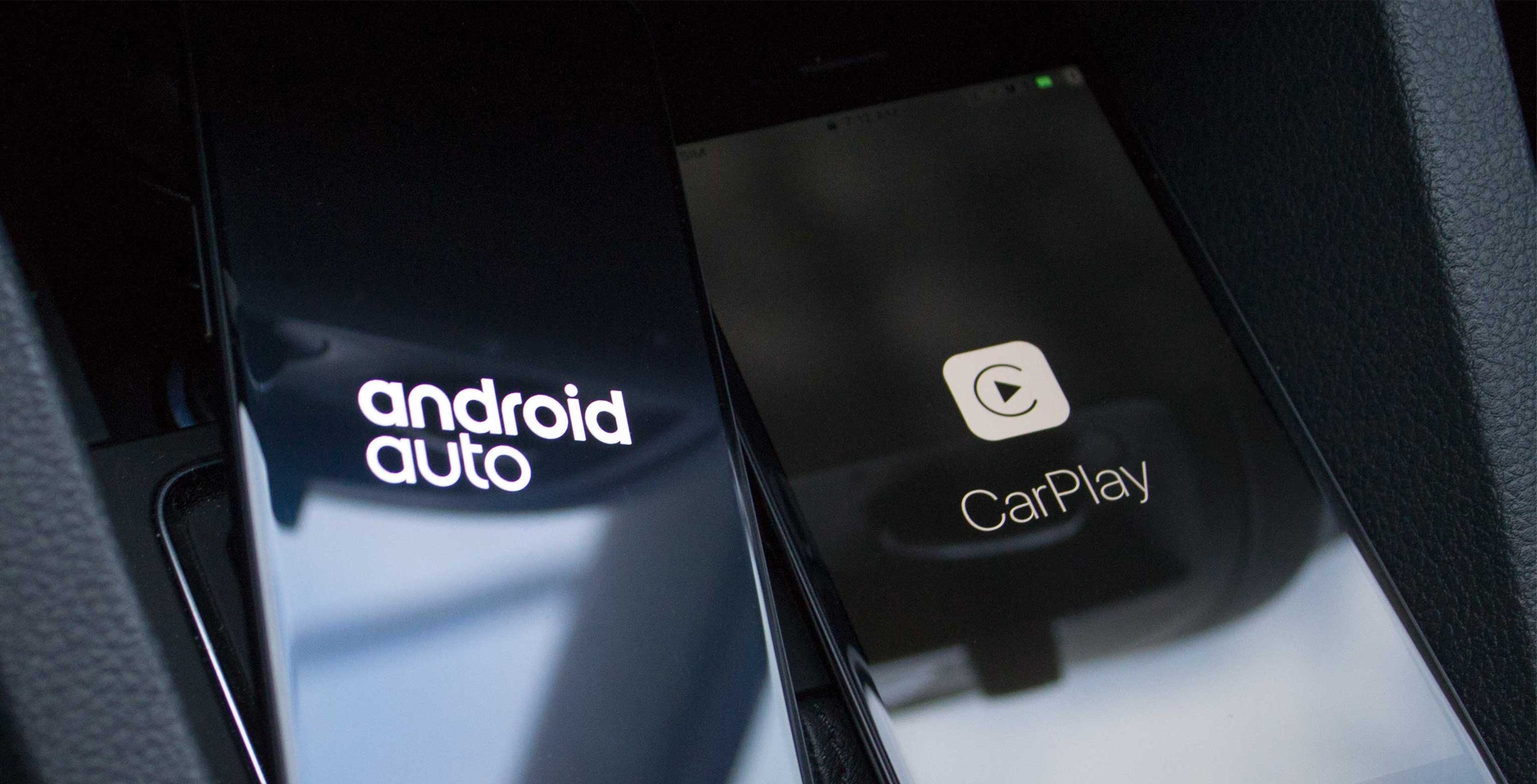 Whether you’re an Android or iOS user, having the ability to use your phone as part of your car’s infotainment system is an undeniably great feature to look for when buying a new car.

Apple’s CarPlay and Google’s Android Auto are options within iOS and Android Smartphones that allow a device to be plugged into a car, projecting a streamlined version of their operating systems onto the vehicle’s built-in display.

When the two systems are compared head-to-head, each does a good job of allowing the driver use their phone safely while driving, but there are a few key differences between the two that may appeal to users with different tastes.

Read on for a detailed comparison of the two in-car infotainment system platforms.

A brief overview of Android Auto and CarPlay

Both phone-car interfaces were announced in 2014 with the goal of helping consumers use their phones safely while driving. They perform the same basic functions, such as texting, making calls, and offering directions, but each works in a different way.

Android Auto’s website says the platform is supported by 27 different manufacturers with a total of 155 cars sold in Canada. Apple states that CarPlay is supported by 31 manufactures with 181 supported Canadian cars. While not all models or trims come with this feature by default, it can often be added for an upgrade fee.

While this may seem like a large gap in supported cars, most popular consumer brands like GM, Volkswagen, Nissan, Hyundai and Ford, offer support for a wide range of models. It’s in high-end vehicles like BMW, which charges $80 USD a year for compatibility, Ferrari and Aston Martin, that CarPlay receives more support.

Peculiarly enough, popular brands like Toyota and Mazda have not really adopted either of these features in their current car line-ups, with Toyota only supporting the 2019 Avalon and Corolla with CarPlay but not Android Auto.

For those who weren’t able to get CarPlay or Android Auto off the lot, there are options for users to add aftermarket units that add these systems to older cars. On Amazon.ca these units range from around $300 to over $1,000 CAD, but are cheaper than buying a new car.

CarPlay sticks with Apple’s design philosophy consisting of a large grid of apps, as well as three recent apps running along the left side. In settings, the grid of apps can be re-arranged and users are able to give the vehicle CarPlay access even while the phone is locked.

The good thing about CarPlays design is that it feels instantly familiar to iOS users because apps on it act almost exactly the same as they would on an iPhone or iPad.

Android Auto features Google’s Material Design sensibilities, but its layout is different than that of a typical Android phone.

The home screen on Android Auto is unique, differing from the traditional grid of apps and instead displaying a list of contextual information like the weather, recent notifications and maps suggestions. These cards are useful, but whether a notification for a certain application will appear on the vehicle’s screen or your phone’s screen can be unpredictable.

Android Auto also has more options in terms of settings and the way it can be used when compared with CarPlay. The platform can be projected onto the car’s interface, but it also features a mode where the platform runs just on a phone — though in Canada, the law dictates that you must mount the phone to the dash. 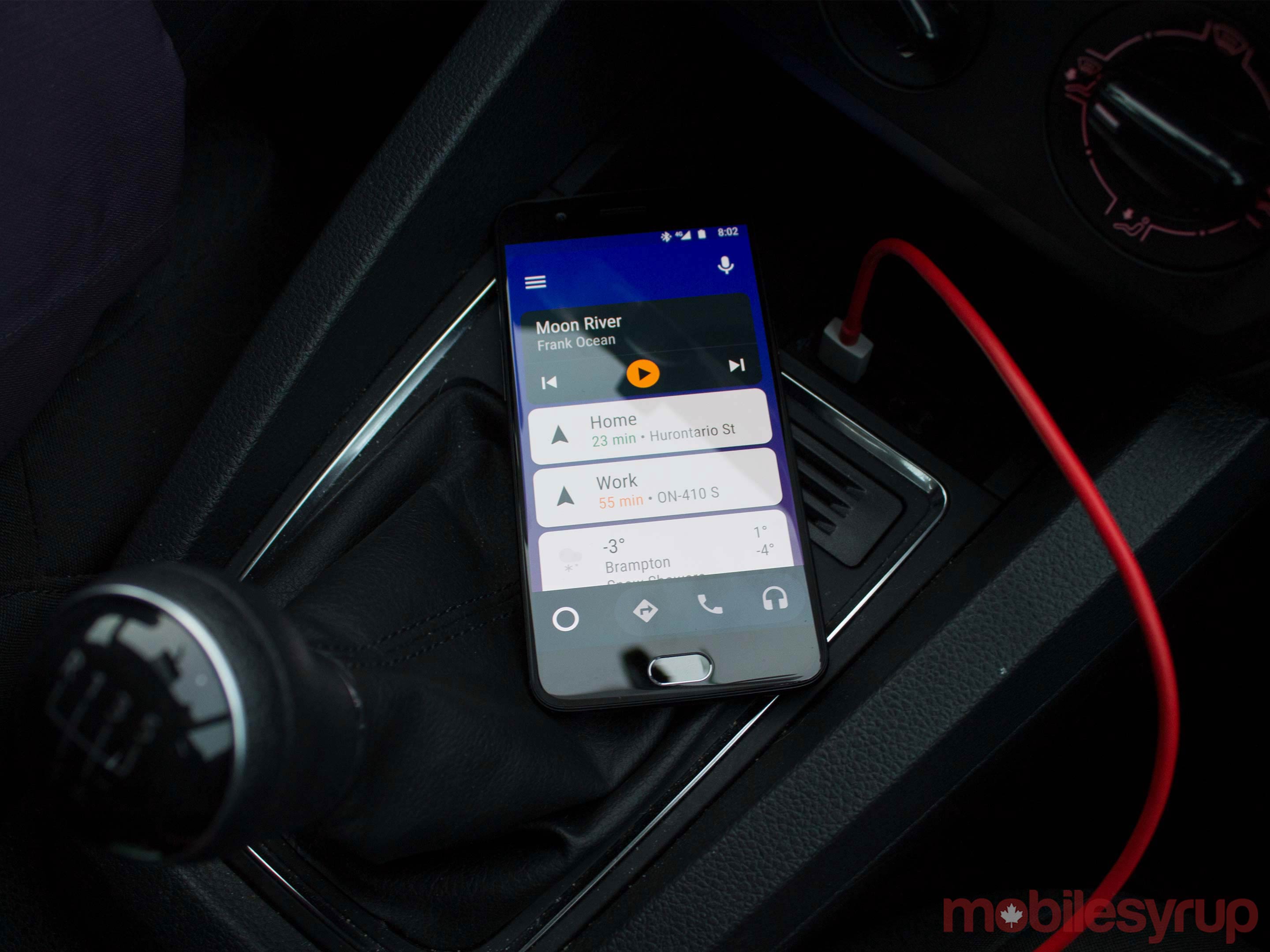 Android Auto still includes a number of smartphone features, but they are often only accessible via Google Assistant or nested inside one of the app buttons along the bottom.

To launch CarPlay, plug in your phone and choose the CarPlay option from the vehicle’s menu. If you have a newer car that supports wireless CarPlay and an iPhone 8, 8 Plus or X, then you can just set your phone on the wireless charger.

Android setup is a little more complicated depending on the phone you’re using. When you first plug in your device, you’re prompted to download the Android Auto app, with a prompt to update key apps such as Google Maps. Once you get all the apps in order, you’re ready to go. This step is crucial on phones that don’t come preloaded with Google’s suite of apps like Google Keep or Google Assistant. Without these apps, asking Google Assistant to perform tasks like saving a note won’t work.

The upside to having to download the Android Auto app is that users don’t need a car that supports it in order to access these features. It’s also compatible with every Android phone running 5.0 Lollipop and above.

Android Auto also has support for wireless capabilities, but so far only some prototype aftermarket setups from Pioneer use built-in Wi-Fi to transfer data from the Android phone to the car.

Both of these interfaces can be controlled by some in-car buttons depending on the car that it’s being used in. It should be noted that the chances of hardware controls working with Android Auto or CarPlay are greatly reduced if you’re using an aftermarket stereo. For example, I have a 2017 Jetta that came built-in with both platforms, and the skip forward and back buttons on my steering wheel work for controlling music. There is also a button that activates Google Assistant and Siri.

To my surprise, the two competing car infotainment systems compare more closely than I would have thought when it came to getting directions.

Each app showed proactive destinations, lane guidance and a voice assistant to give a heads-up for turning and possible traffic up ahead.

Google Maps gives drivers a few more options, like avoiding tolls and highways while driving. To do this on Apple Maps, you need to set it on the phone beforehand.

Apple Maps in night mode and the regular the Google Maps turn-by-turn navigation screen. (It’s worth nothing that both maps support night mode)

Android Auto also supports some other mapping apps like Waze, while CarPlay only lets you use Apple maps.

Google Assistant and Siri both hold up well in the car by being able to control most of the primary functions such as texting, calling, reminders, asking about the weather and choosing music in Canadian English and French.

On Android Auto, Google Assistant — added to Android Auto only this year — is crucial for texting. The only way to send a text is via voice commands. This plays into Google’s idea of making Android less of a visual distraction.

CarPlay doesn’t rely heavily on Siri functionality when it comes to most features, but it must be used to dictate texts or use reminders, alarms and notes.

The audio interface for Android Auto includes most of the same options Android users are familiar with, including what’s playing next, playlists, recently played, and shuffle. What it leaves out is the ability to look through specific songs and artists, unless you ask Google Assistant to play a specific song.

Android Auto will lock the user from browsing the app if they spend too much time distracted from the road, pushing the driver towards using Google Assistant instead. I found I could get about three swipes through the music queue before Google play Music presented a message that told me to look at the road.

Spotify and Tidal are also supported and look the same as Google Play Music in Android Auto, but they do let the driver exercise more control. In both of these apps you can look at albums and playlists, but not individual songs.

CarPlay’s audio interface has all the same buttons and options for services like Apple Music or Spotify, including ‘Playlists,’ ‘Browse’ and ‘Now Playing.’ It also gives users more control to look through every song in their library and up-next queue.

Making calls with both interfaces is a simple process. Just open up the calling app and from there you can use a voice assistant, or pick from some contacts.

Android Auto presents users with a list of recent calls, some favourites, a keypad, or a sidebar menu that with voicemails and missed calls.

CarPlay works very similarly. The app opens and first asks you who you want to call with voice controls, but you can pass by this to see contacts, recent calls, a keypad and voicemails.

Texting in CarPlay works along the same lines, with a list of recent conversations, or an option to start a new conversation, but Siri has to be used to dictate and send a message.

Android Auto has no texting app and requires users to ask Google Assistant to send a text to a specific person with voice controls.

When you stack these two forms of infotainment software against each other, they both do a lot of the same things but in their own ways.

Google places a more significant emphasis on hands-free use with voice features, while still providing enough on the screen to make using Android Auto familiar to both Android users and people who already have experience with in-car entertainment systems. That strategy, along with the addition of maps and other Google Assistant features, makes this a compelling feature for Android users purchasing a new vehicle.

CarPlay plays it straight by porting over familiar aspects of iOS and by either making them more prominent or dumbing them down to ensure they’re less distracting. It seems that whatever the platform couldn’t simplify enough can be controlled with voice commands — though Siri functionality doesn’t take things as deep as Android Auto and Google Assistant.

Overall CarPlay is simpler to use, but it can be more distracting than Android Auto. As with many things in the consumer tech world, it’s ultimately a case of individual preference.

If you had Android Auto issues with Android 11, you might be in luck