The Mate 10 Pro makes me excited for the Huawei P20. 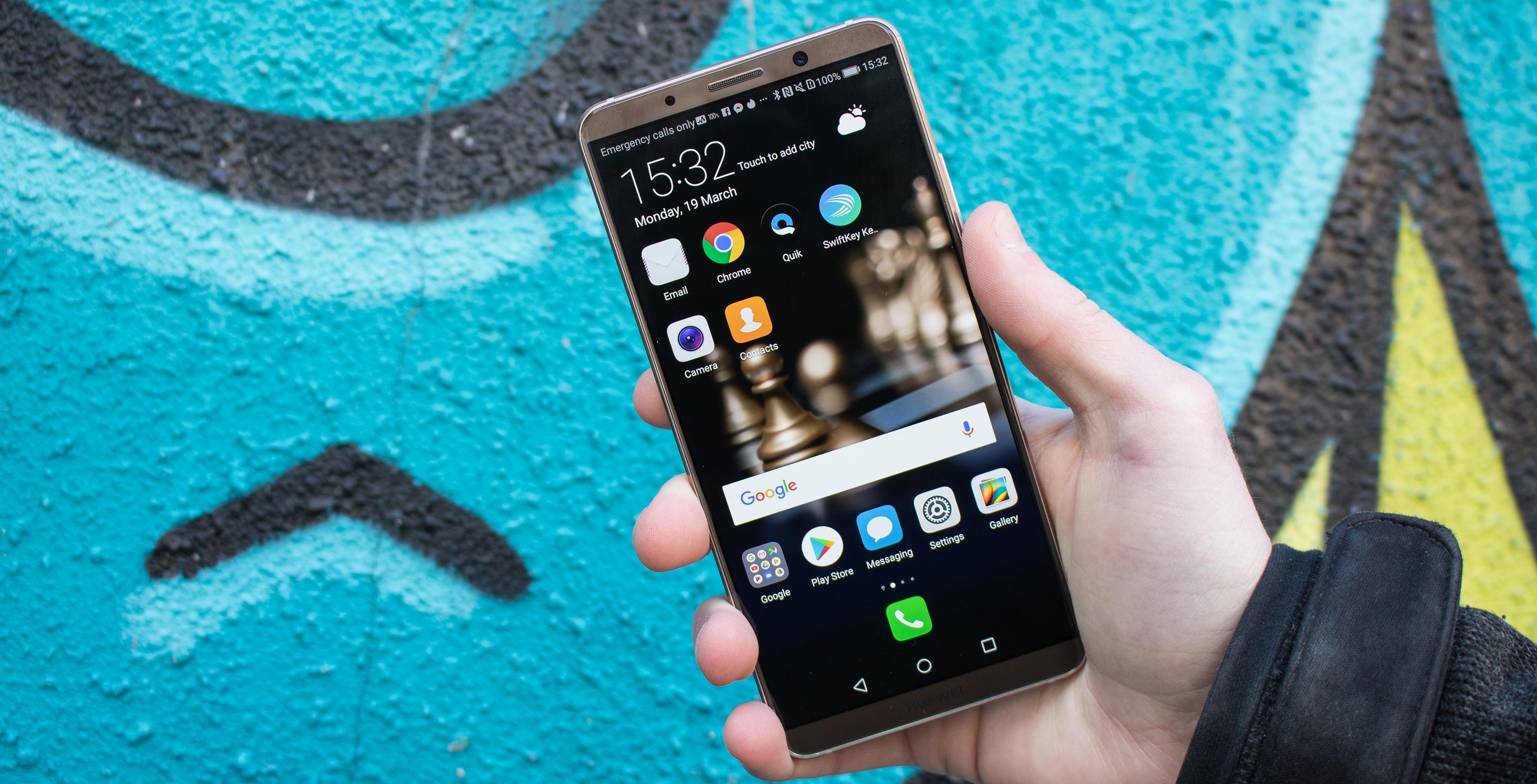 Huawei then revealed the Huawei Mate 10 and Mate 10 Pro smartphones in October of last year. Both handsets feature the company’s Kirin 970 chipset. While Huawei doesn’t officially plan on bringing either of the two devices to Canada, the Mate 10 Pro gives us a sneak peek at the device’s potential computing power and features that could be included in the company’s soon-to-be-released Huawei P20 series smartphones.

With the Mate 10 series, we can see whether or not the P20, which is confirmed to use the Kirin 970 chipset, will be able to compete with flagship devices like the Samsung Galaxy S9, Asus ZenFone 5Z and the Sony Xperia XZ2 — three devices that feature Qualcomm’s Snapdragon 845 processor. 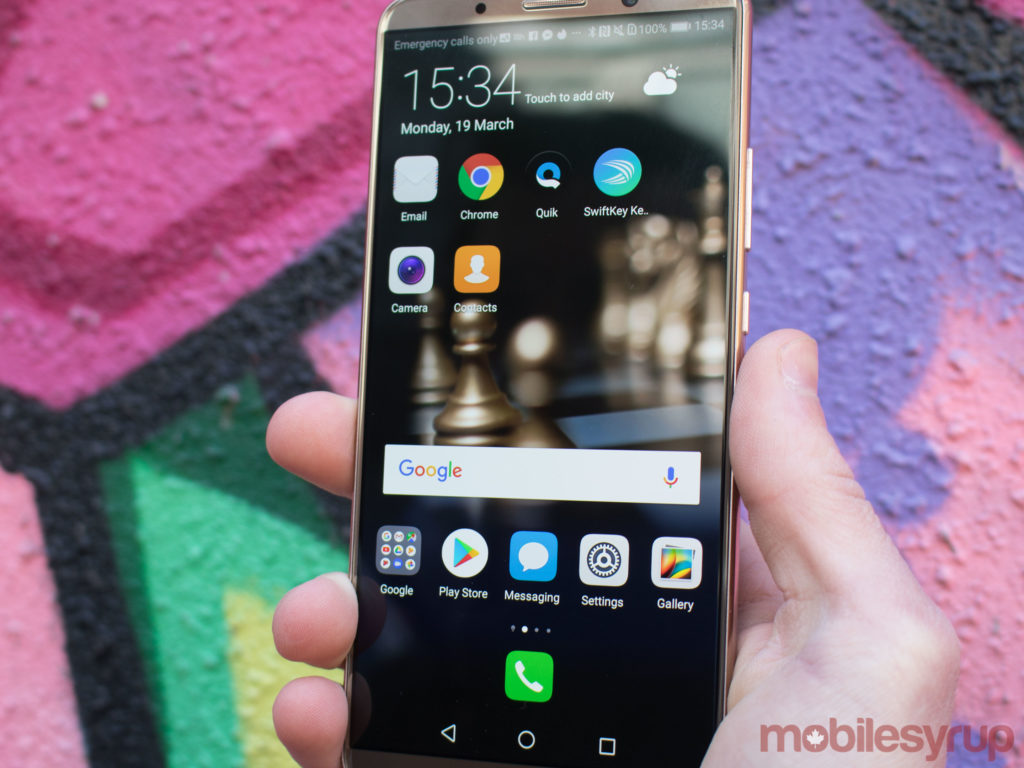 Other 2017 flagships like the Samsung Galaxy S8+, the OnePlus 5T and the Pixel 2 XL all scored similarly. Check out their scores below.

As you can see, other than the OnePlus 5T, the Huawei Mate 10 Pro’s earned more favourable scores than the Pixel 2 XL and Galaxy S8+.

One should note all three of the above smartphones feature Qualcomm’s Snapdragon 835 chipset.

The Samsung Galaxy S8+ and the Pixel 2 XL both sport 4GB of RAM, while the OnePlus 5T unit I benchmarked featured a whopping 8GB of RAM. 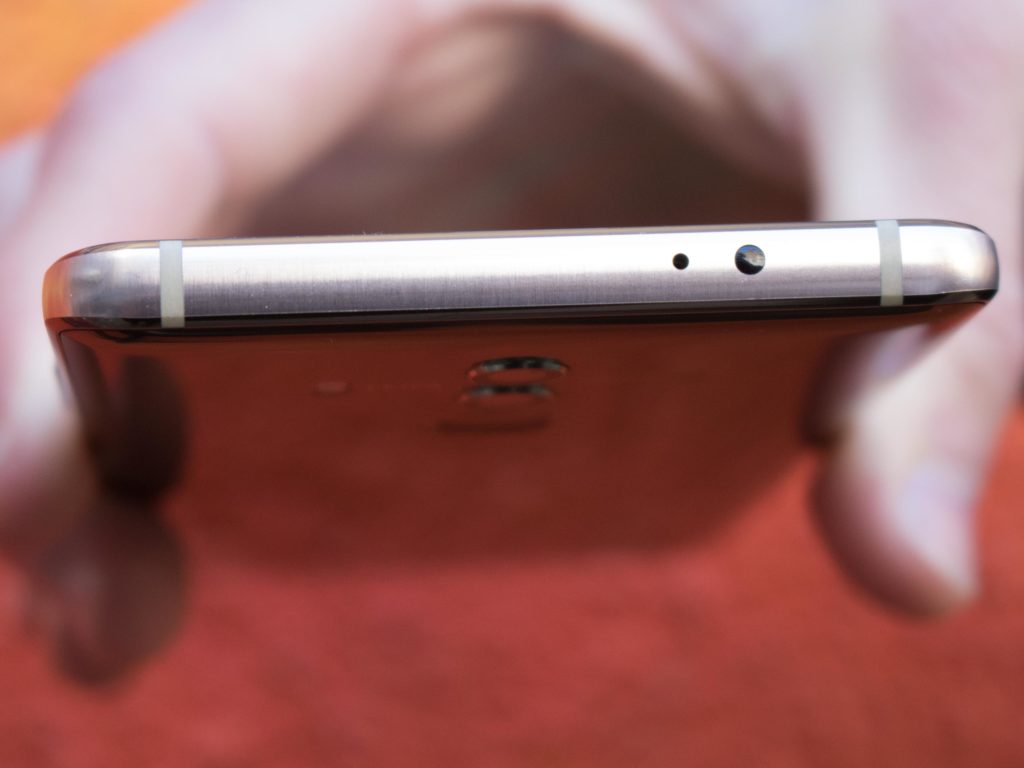 While benchmarks don’t always translate into real-world performance, the difference between the scores of the Galaxy S9+ and Mate 10 Pro seem large enough to make a meaningful difference.

In practice though, the Mate 10 Pro runs buttery smooth. Apps load without hesitation, switching between apps is likewise seamless and even multi-tasking using two windows at once doesn’t cause any slowdown.

The phone usually stays very cool at 32°C, though after a bit of gaming it did warm up to 36°C. When I went to game, I played Tap Titans 2, Drag’n’Boom, Super Toss and Almost A Hero. Those all ran without the phone slowing down at any point or causing any issues.

In short, the Mate 10 Pro definitely offered a great experience when it came to day-to-day use.

It’s possible the P20 Plus — the premium device out of the three new P20 smartphones — will feature similar benchmark scores, but, as I said before, that’s not necessarily a knock against the device.

Look what AI can do 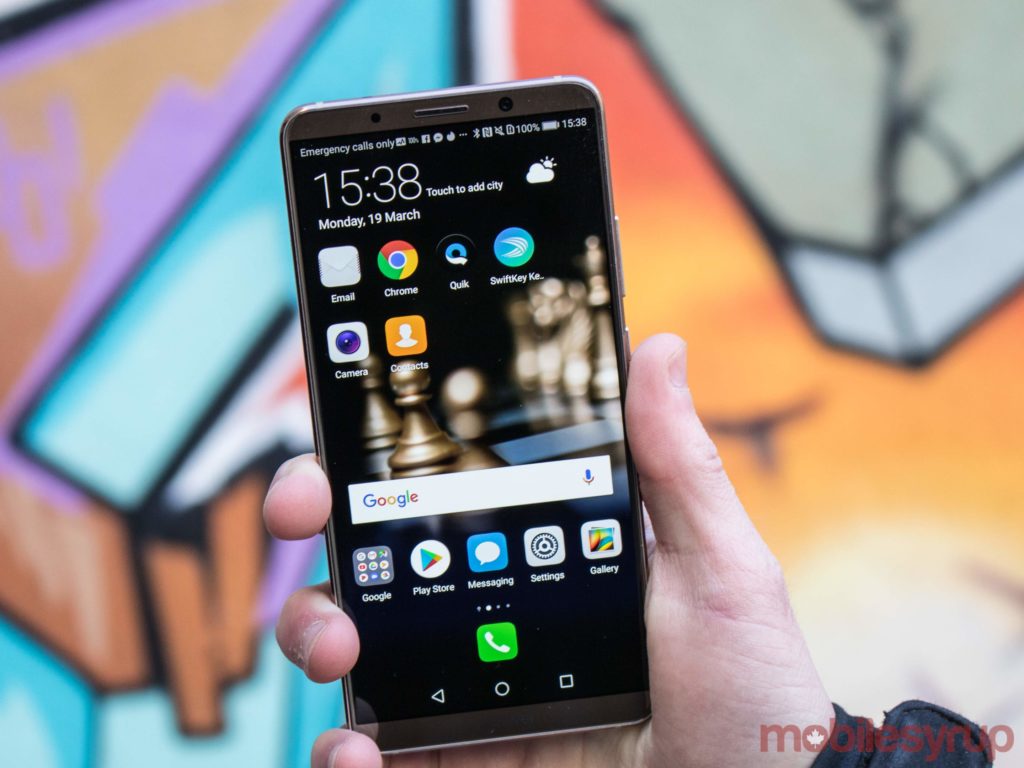 The most notable feature of the Kirin 970, at least compared to some other chipsets, is the included artificial intelligence that helps power Mate 1o Pro’s camera app.

The camera AI is capable of identifying a variety of subjects and then adjust capture settings as needed. According to Huawei, this means the AI is able to tell the difference between drastically different subjects like a flower and a human face, and then snap a picture that makes the subject look its best. While the Mate 10 Pro isn’t transparent about how it alters images, I did find that there was definitely a difference between photos when shooting different subjects.

For instance, with a plate of Thai food, the Mate 10 Pro added what looked like a filter to the image, changing the way the food appeared. Meanwhile, when I took a photo of someone’s face, the phone added a subtle bokeh effect and overexposed the final image slightly. With a picture of text, the phone added sharpening to make the words clearer, while with an image of flowers the phone made the photo more vibrant. 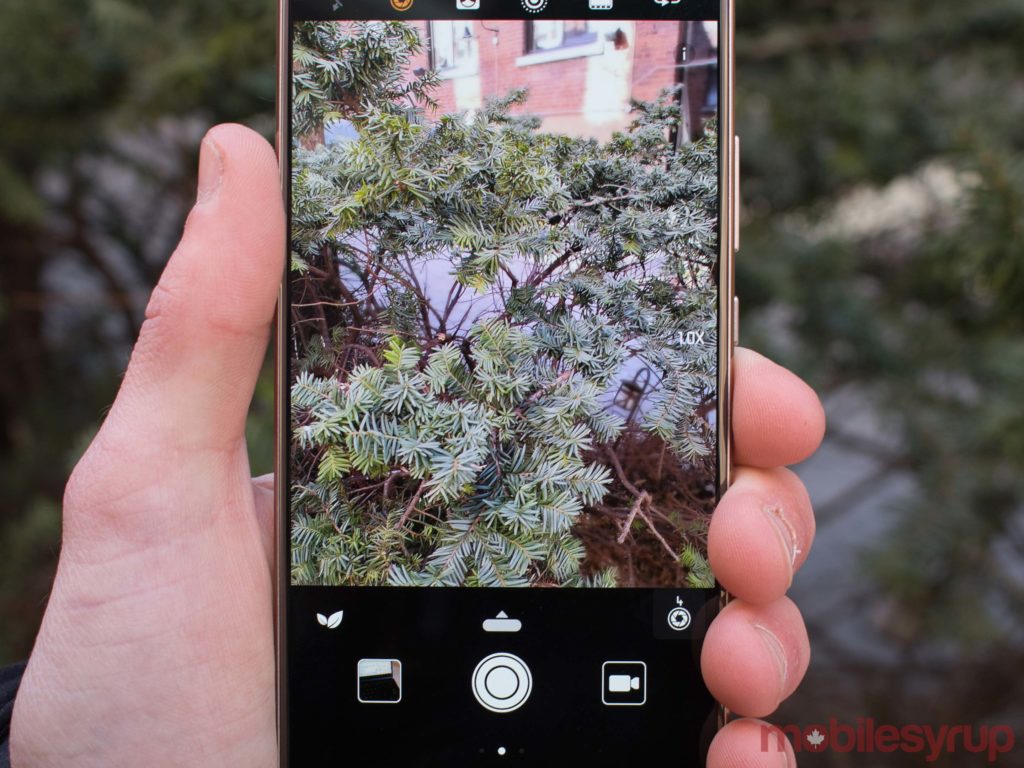 By comparison, Google Lens was better able to translate written languages, though it had its own struggles too.

Users can download entire dictionaries so that this feature can be used offline.

One of the most impressive features that utilizes the Kirin 970 chipset is the Mate 10 Pro’s “Easy Projection” functionality.

With this feature, users can plug their Mate 10 Pro into a monitor and use it as a desktop. This version of the device allows users to access all of the apps on their smartphone, as well as the ability to write notes and search through Chrome.

Users can also connect a keyboard and a mouse wirelessly to Mate 10 Pro, use the phone’s touchscreen as a keyboard and touchpad and connect a controller to play games. It’s like carrying around a pocket-size Chromebook.

Also, if you want to see the Kirin 970 chipset driving an autonomous vehicle, check out this video.

With the same Kirin 970 processor, the Huawei P20 and P20 Pro will likely use similar AI camera capabilities, the ability to use it as a pocket-sized Chromebook and on-the-fly translation.

The Huawei Mate 10 Pro takes clear and sharp pictures. I found most of the environmental shots I took with the rear-facing camera looked true-to-life. However, some pictures came out underexposed. For instance, a shot of the C.N. Tower resulted in the tower and the overcast sky appearing darker than it really was.

The front-facing shooter, on the other hand, I found slightly overexposed pictures. The selfies I took with my friends always ended up way to bright, which resulted in my friends and I choosing to take selfies with an iPhone X.

The phone also offers a pro mode which allows users to adjust settings like ISO, shutter speed and exposure compensation.

The Mate 10 Pro will be nothing in comparison to the Huawei P20 Pro’s, however. The P20 Pro will feature a triple rear camera setup decked out with a 40-megapixel main RBG sensor, a 20-megapixel black-and-white sensor and an 8-megapixel sensor with telephoto lens.

With the P20 Pro, one of Huawei’s main focuses was its camera capabilities and pushing the limits of what it can do. The camera will also likely feature a 5x hybrid zoom feature, according to past rumours. Compared to the Huawei Mate 10 Pro, the P20 Pro’s camera should be far superior. Even its front-facing camera is to feature a facial recognition software, something the Mate 10 Pro doesn’t have.

So much battery life 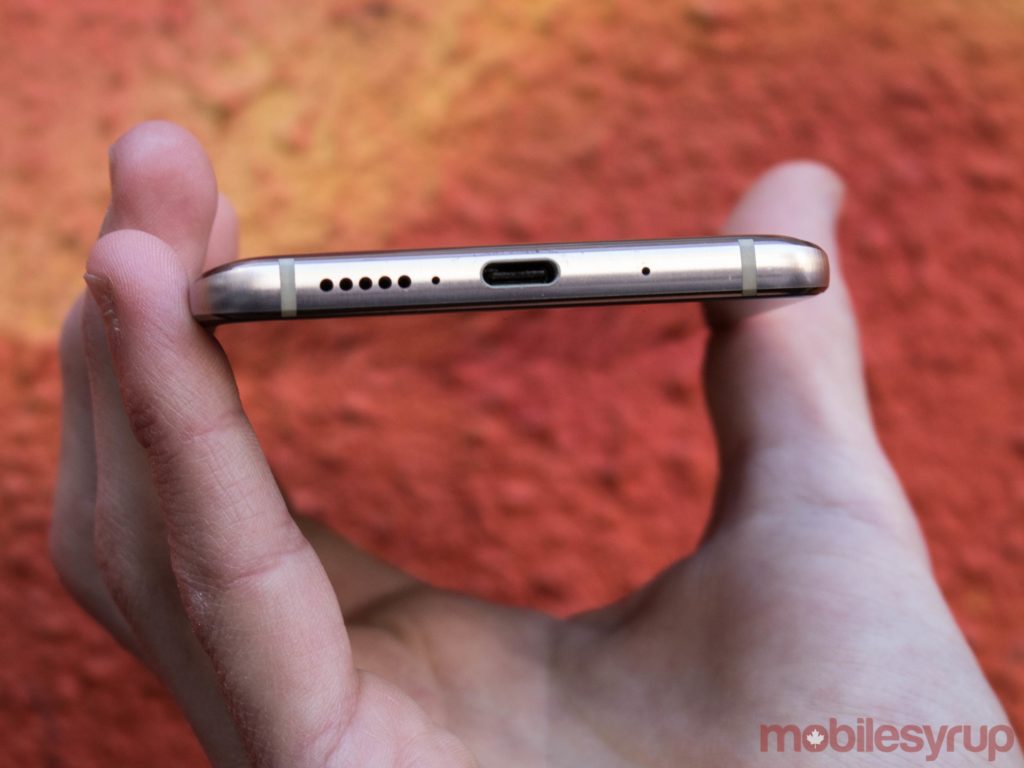 One of the most impressive things about the Mate 10 Pro is its 4,000mAh battery.

The handset’s battery often lasted more than 24 hours. And when I really started monitoring the battery very closely I noticed that the phone could actually last up to 31 hours with nearly two hours of watching videos on Netflix and more than 6.2 hours of screen-on time.

The Huawei P20 Pro is also rumoured to feature a 4,000mAh battery. It’s likely the phone will be able to survive throughout the day just as long as the Mate 10 Pro, since they both use the same processor and similar screen sizes — leaks claim the P20 Pro will have a 6.1-inch display.

Rumours point to the P20, on the other hand, sporting a 3,400mAh power source. With a smaller battery and the same processor, it’s likely the phone will not endure as long as the Mate 10 Pro or P20 Pro, even with a smaller screen size.

In terms of its display, the Mate 10 Pro features an AMOLED 1080 x 2160 pixel resolution screen that is HDR10 compliant.

I found the display to be quite lacklustre when comparing to devices like the Samsung Galaxy S8 and the iPhone X. However, on the other hand, there was no light bleed nor did the colours shift depending on the viewing angles. All in all, it was a decent display, I just hoped for something better especially considering the Mate 10 featured a 1440 x 2560 pixel resolution.

The Mate 10 Pro’s screen was lacklustre and rumours claim that the P20 Pro’s display will also be quite dull. The P20 Pro, according to the leaks, will feature a 2240 x 1080 pixel resolution OLED display with a 19:9 aspect ratio. It’ll likely look just as average as the Mate 10 Pro.

The Mate 10 Pro makes me excited for the Huawei P20.

The P20 series is also supposed to feature its own facial recognition software that uses the Kirin chipset.

For those interested in Mate 10 Pro can head to Canada Computers and purchase the handset for $899.99 CAD. However, Huawei will launch its P20 series, on March 27th and will likely have the devices available for consumers, even in Canada, soon afterwards.

To learn more about the P20 and P20 Pro check out our collection of rumours and leaks regarding Huawei’s upcoming smartphones.