Shadow of the Colossus on PS4: a masterpiece comes to a new generation 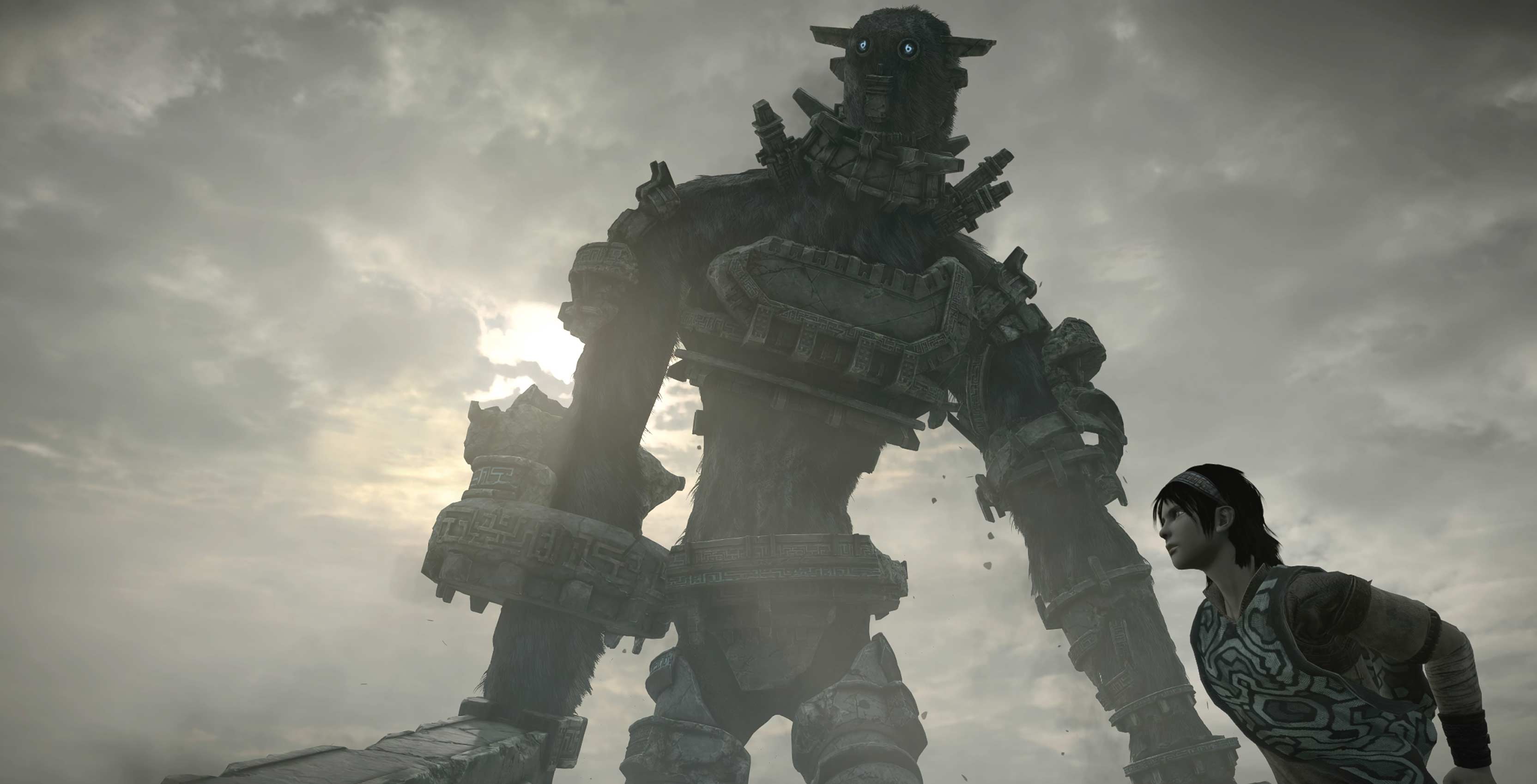 Are video games art? That’s a question many fans, pundits and game makers have debated over the years. However, the game that first made the strongest case in favour of games’ artistic merit, was Team ICO’s Shadow of the Colossus.

Since its 2005 release on the PlayStation 2, Shadow of the Colossus has gone on to become one of the most acclaimed games of all time, in no small part due to the brilliant artistic choices director Fumito Ueda and his team were bold enough to make.

Now, to bring the game to a new generation, Sony has wisely enlisted the talents of Texan developer Bluepoint Games, best known for its remastered versions from the PlayStation 3-era of games, such as The God of War Collection, The Metal Gear Solid HD Collection and, appropriately, The ICO & Shadow of the Colossus Collection.

That said, while Bluepoint has certainly proven its remaster pedigree, Shadow of the Colossus on PS4 marks the first time the developer has remade a game completely from the ground up. Thankfully, what Bluepoint has done with Shadow of the Colossus on PS4 is not only a huge success, but also serves as a template for how any modern remake should be handled.

Shadow of the Colossus for the first time in 2018 will likely be struck by how understated the game design is. An arid open-world featuring little to do, sparse dialogue and an ambiguous plot can initially seem like major detractors.

But while most games would feel empty for lacking such seemingly essential components, Shadow of the Colossus embraces its minimalism. You play as Wander, a young man who ventures to a forbidden land on horseback to restore the life of a girl named Mono. 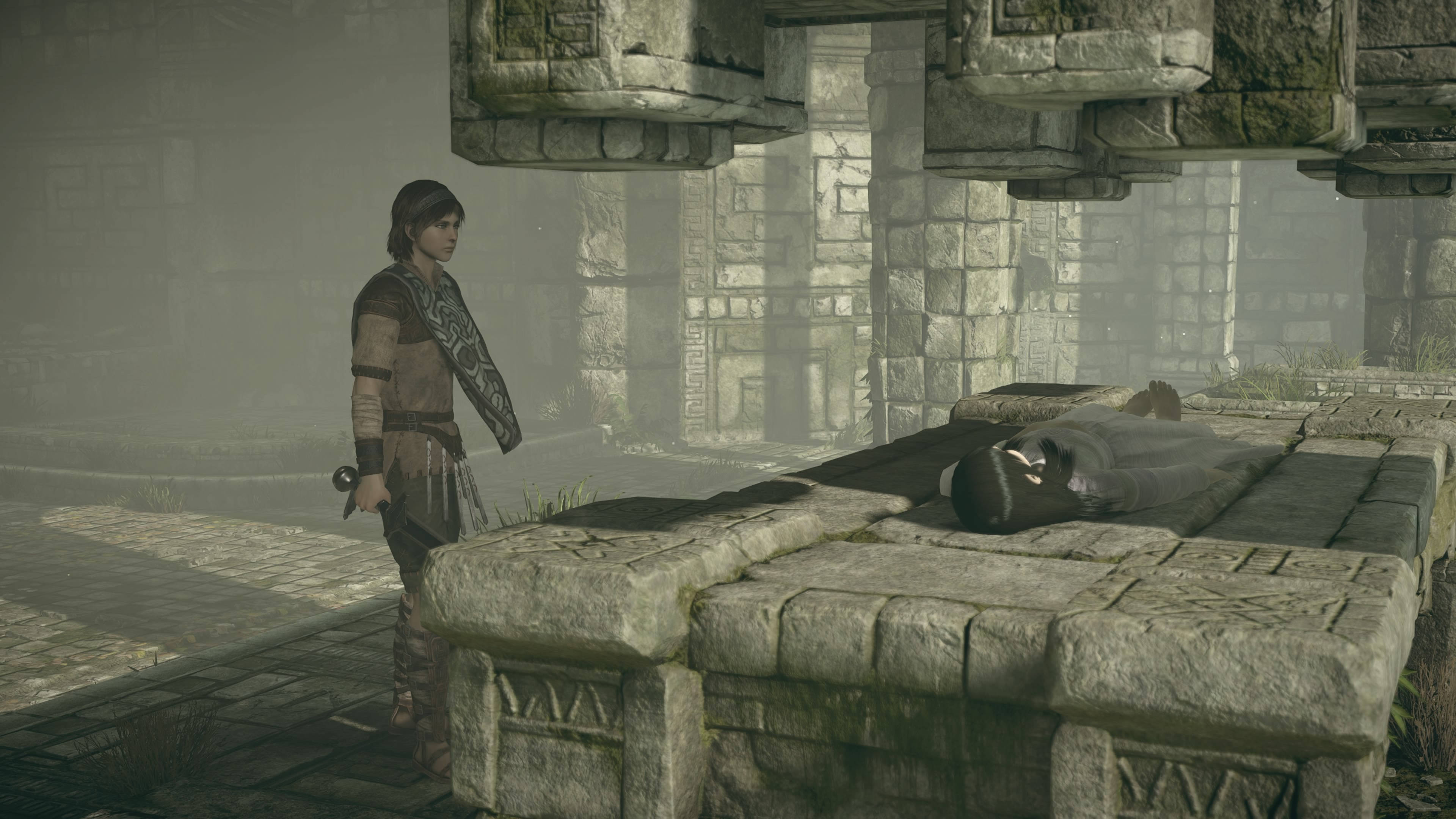 When Wander arrives to a sacred Shrine, a mysterious voice belonging to a spirit calling itself Dormin tells him that defeating the 16 Colossi roaming the land will bring Mono back to life. However, despite warnings that the cost of his success may prove to be too high, Wander nonetheless rushes out with his trusty steed, determined to save Mono as quickly as he can.

Shadow of the Colossus is one of the few games where a barren setting is so effective. The oftentimes long stretches between the Shrine and the next Colossus are a brilliant opportunity for reflection. “Why am I here, really?” “Who is Dormin?” “What is this strange, foreign land?’ While Ueda plays it coy with providing any concrete answers, these are some of the interesting questions he implores you to ask yourself throughout your journey. 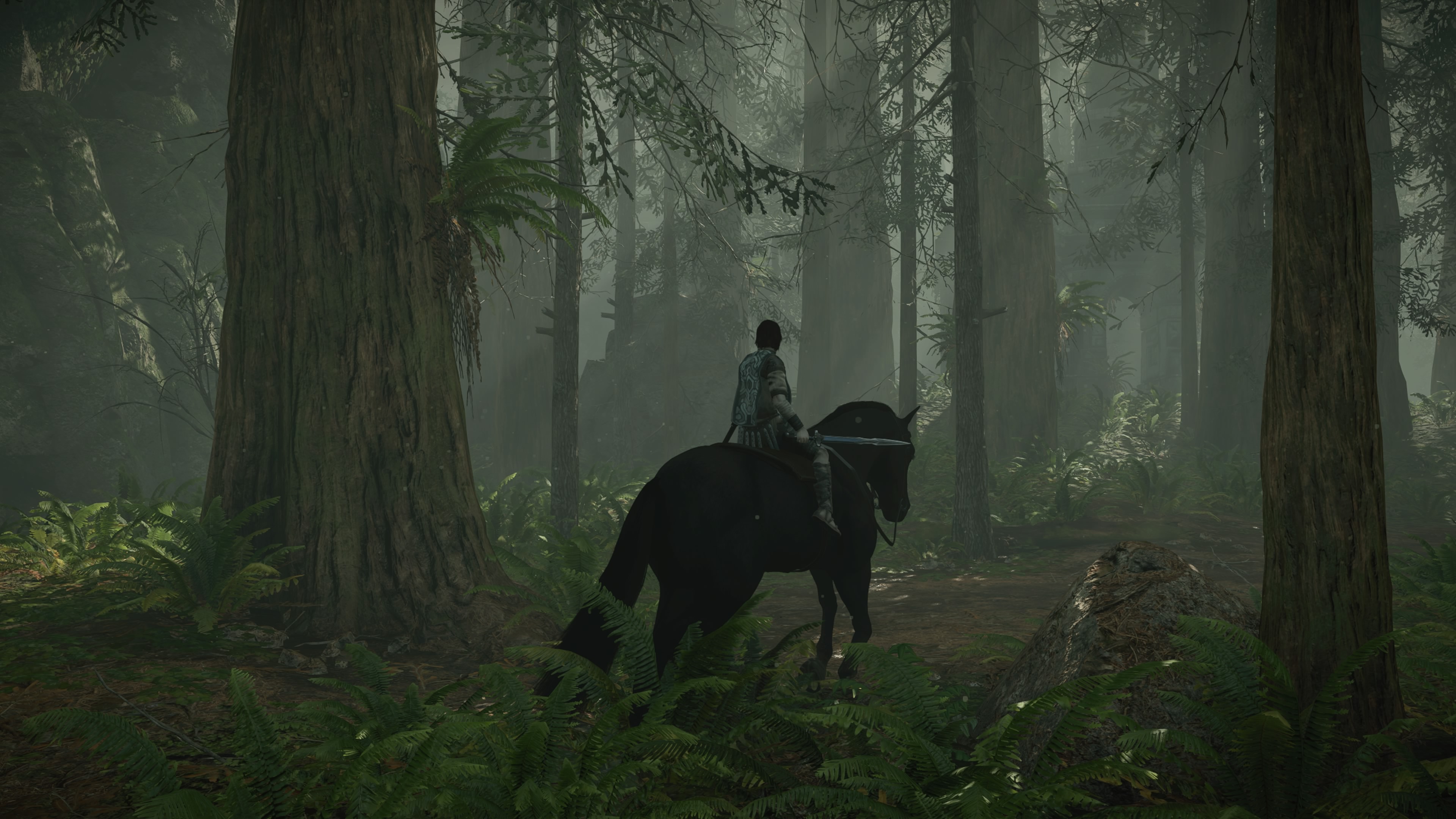 At the same time, the feeling of isolation only further strengthens your bond with Agro. As your only companion, you truly come to appreciate his presence. Whenever you need Agro, a quick press of a button will call him to your side.

In some battles, Agro will even be needed to help you defeat the Colossi, making him all the more vital of an ally. Therefore, the times when Agro can’t follow Wander through small passageways or to higher areas is particularly disconcerting and makes you feel even more alone.

Yet, you are never truly alone here, as the titular Colossi await you in some of the most cleverly designed boss fights I’ve seen in gaming. To defeat them, you’ll need to discover their weak points using only a sword, a bow and your wits.

That’s much easier said than done, though. Sometimes, a Colossus’ weak spots are covered by thick armour, forcing you to find a way to get them to remove it. Other times, they may be hidden entirely, forcing you find a way to trick the beasts into exposing themselves. 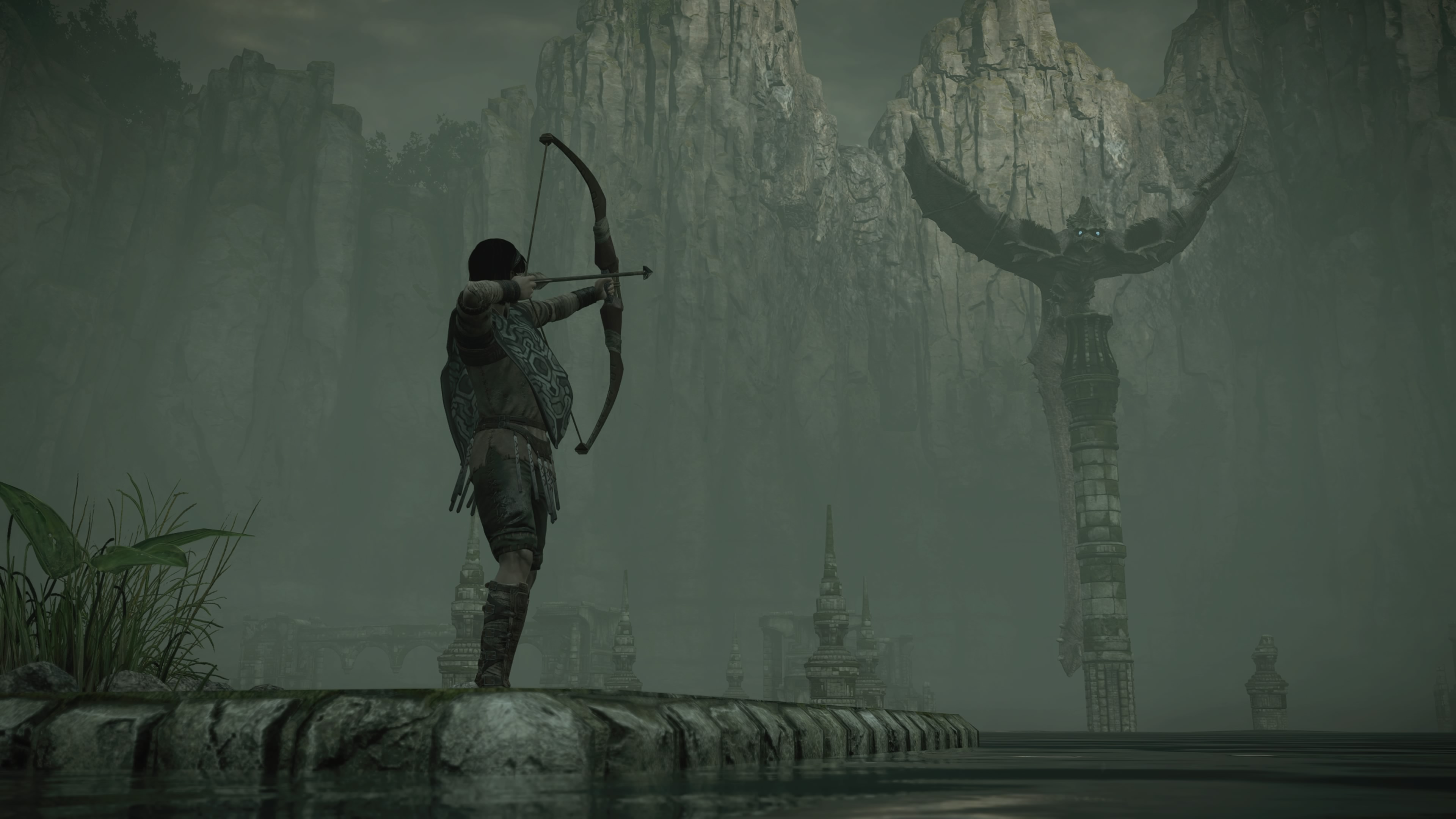 That isn’t always easy, though. Wander has a stamina bar that steadily decreases as he climbs. He can also only grab onto ledges or large tufts of Colossi hair, meaning you have to plan your jumps accordingly. Colossi also don’t go down without a fight, writhing, twirling and running around to shake you off whenever possible. Understanding a Colossus’ movement pattern and knowing when and where to rest and regain your stamina is key.

While these battles are absolutely grand, largely thanks to composer Kow Otani’s sweeping score, these encounters also carry with them the Shadow of the Colossus‘ signature meditative nature. Once you deliver the final blow and a Colossus keels over, a somber requiem will mark your victory. Most games reward you for such a big victory, but you’ll get no such feeling here. Don’t expect any additional gear, experience or abilities, or even a triumphant Final Fantasy-esque fanfare. The game almost begs you to ask yourself: “what did I just do? Am I really the hero here?” 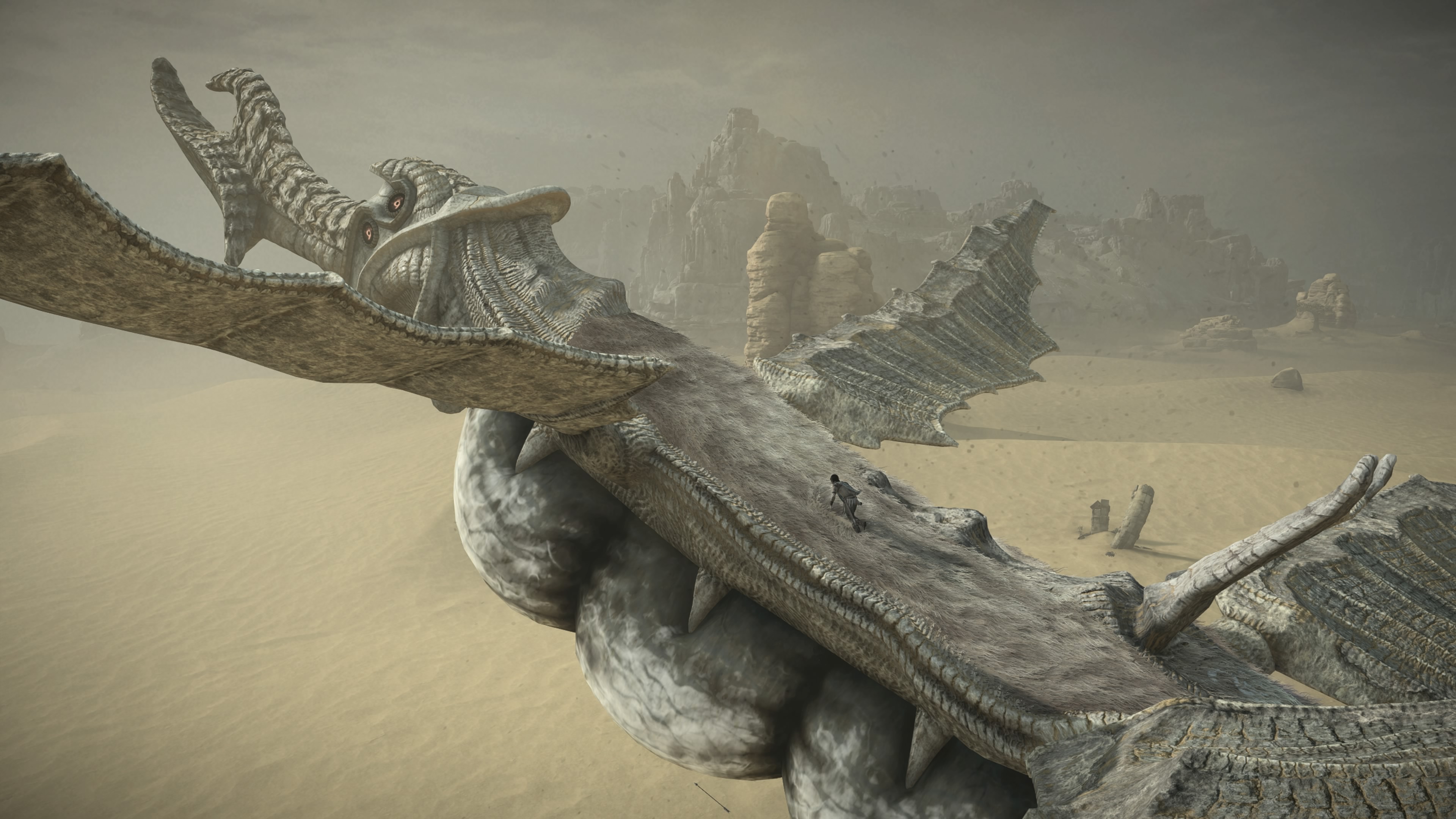 Shadow of the Colossus’ ambiguity is one of its greatest strengths, challenging you, the player, to give thought to everything you’re doing — an element that Bluepoint sensibly left untouched. This all culminates in a pulse-pounding, emotionally stirring conclusion.

Stepping out of the Shadows

What Bluepoint has touched up, though, is the game’s visuals and other technical elements. To be sure, the game is already quite pretty on a standard PS4, but those playing on PlayStation 4 Pro benefit from even more sweet perks. From the start, owners of Sony’s mid-generational, 4K-capable PS4 will be able to choose from one of two modes — Cinematic or Performance.

The former option, which emphasizes visual fidelity, boasts a beautiful dynamic 4K HDR picture at 30fps, while the latter keeps resolution at 1080p while targeting 60fps. While certainly a pretty game either way, I spent the the bulk of my playthrough with Cinematic mode turned on, as it’s simply  gorgeous. 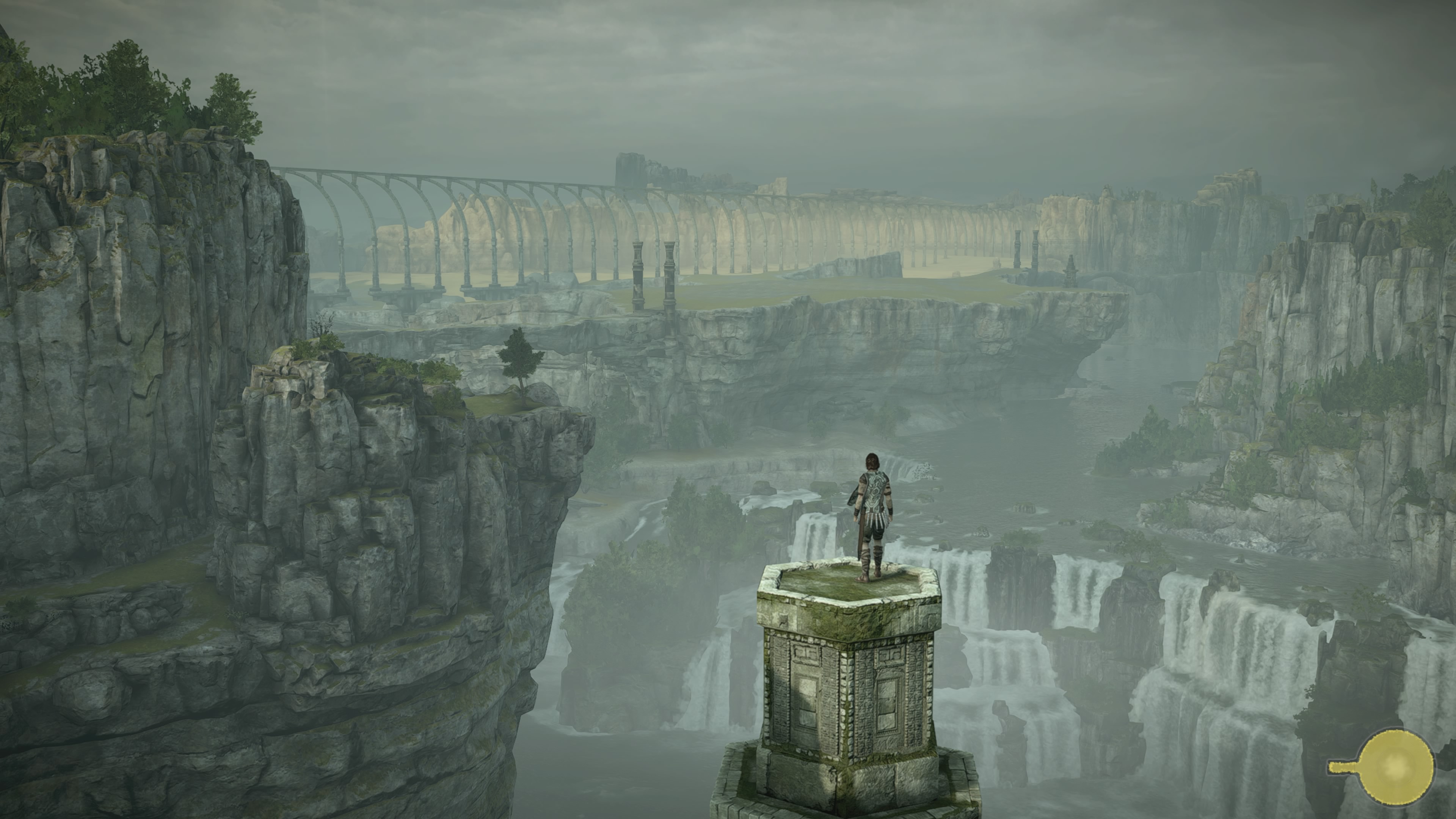 Limitations of the PlayStation 2 hardware meant Team ICO couldn’t add more detail to the world, but there are no such problems on PS4. Bluepoint has spent a great deal of time visually livening up the land, all without compromising on its unique empty feeling.

A rich volumetric lighting system means rays of light shine radiantly through crevices, redone, tighter animations make Wander feel even more lifelike and a larger depth of field makes the setting feel more vast and expansive. A new robust Photo Mode also makes it easier than ever to capture the beauty of the game. All the while, the music you’ll be hearing has also been tuned-up, with additional musicians and string instruments added to make Otani’s already phenomenal score even more lively. 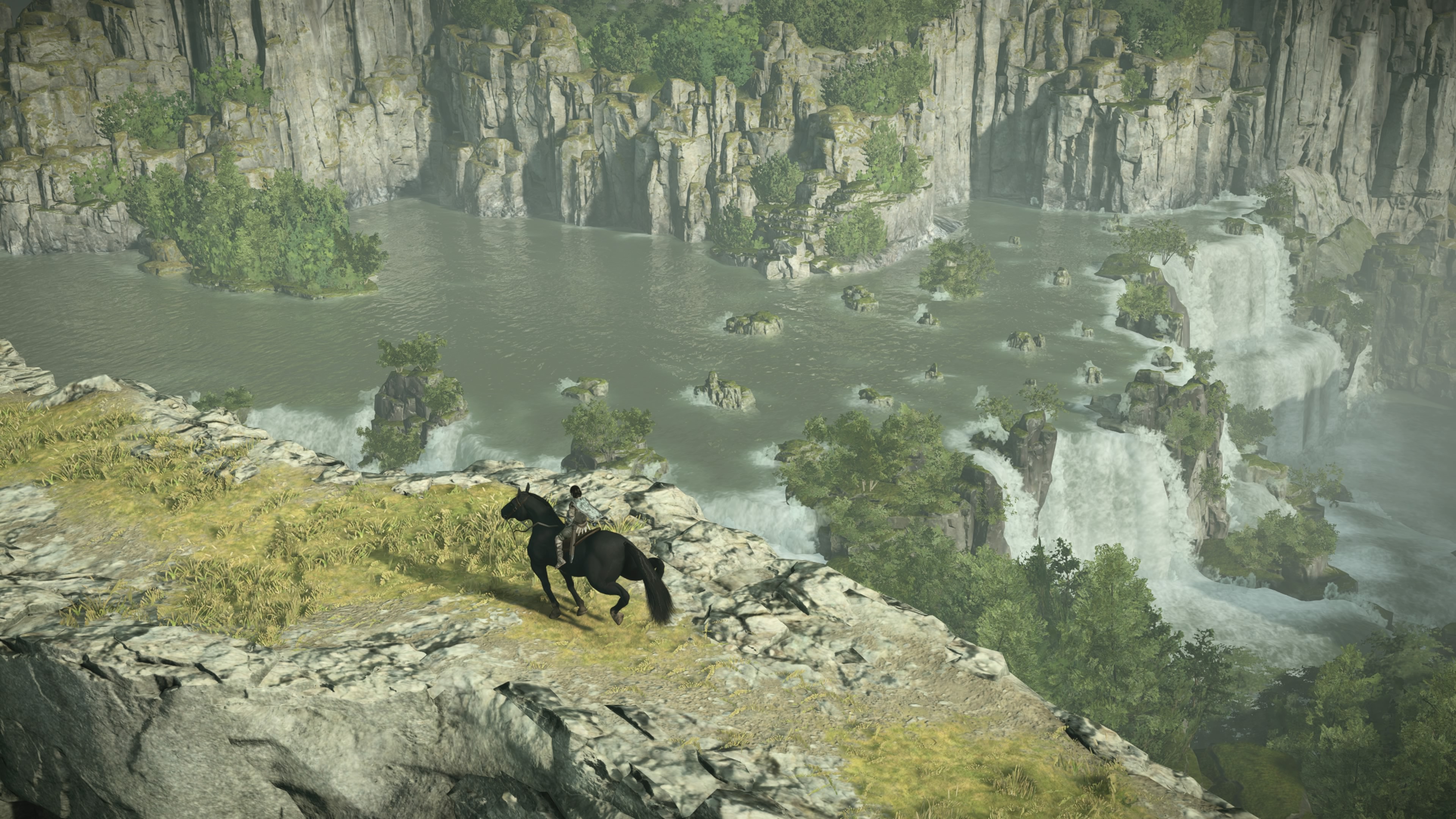 Bluepoint even managed to make the game feel better, too. One of the few problems with the original game was that the controls were a bit clunky. In response, Bluepoint has added a new control scheme with button layouts that reflect more traditional sensibilities, such as pressing ‘X’ to jump. At the same time, in keeping with the reverence for the original experience, there’s also the option to change back to the classic controls — a lovely touch for diehard fans.

However, I wish Bluepoint put more work into Wander’s movement. While he feels great to control while on foot and horseback, some of his other contextual movements can be sluggish and unresponsive. Certain Colossi battles take place in flooded environments, forcing Wander to swim between platforms to reach his constantly moving foes. However, as in the original game, Wander‘s swimming is achingly slow, making it feel all-too tedious to navigate during these aquatic battles, especially when they take place in significant bodies of water. 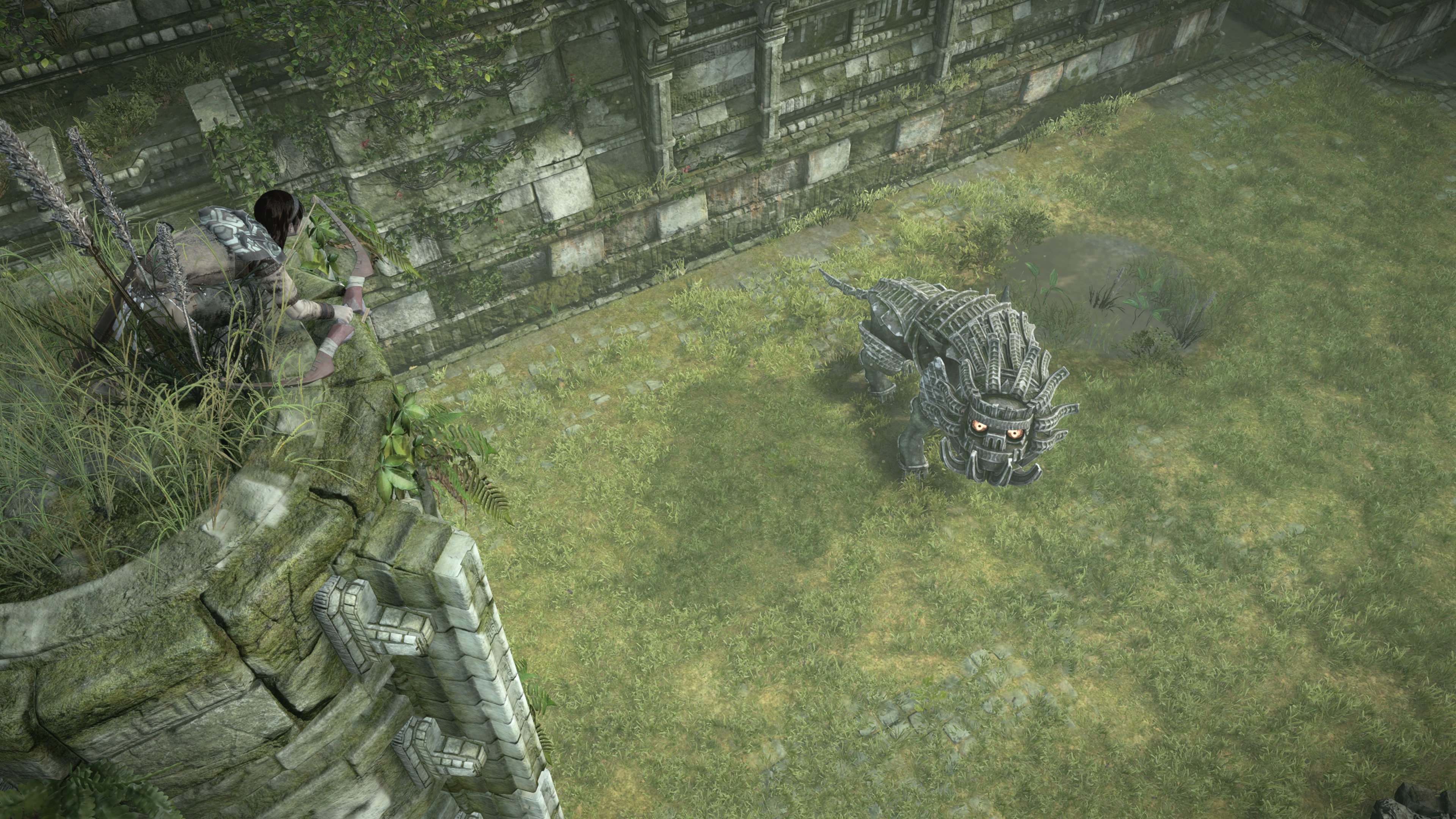 Wander’s recovery after being knocked off his feet is similarly slow and laborious. This in and of itself is frustrating, particularly when fighting Colossi that throw you around often, but the problem is exacerbated when the enemy AI can be unrelenting. In several occasions, I would get pummelled to the ground, only to be hit once again before Wander could even get to his feet. This sometimes happened repeatedly in one fight, nearly completely draining all of Wander’s health and making an otherwise tense fight feel much more frustrating than it needed to be.

Overall, though, Shadow of the Colossus has held up wonderfully, despite being nearly 13 years old. The word “epic” is thrown around a lot these days, but here, it’s a perfectly apt descriptor, featuring monumental battles with gargantuan foes with a sense of a scale rarely seen in even the most modern of games.

At the same time, Shadow of the Colossus revels in its quieter, more peaceful moments, creating a sensational experience that feels timeless. Bluepoint Games truly understands all of this, crafting a remake that stays true to the original game while offering a number of visual and technical improvements. For newcomers and hardcore fans alike, this remade masterpiece is an absolute must-play.

Shadow of the Colossus is set to release on the PlayStation 4 on February 6th at a suggested retail price of $49.99 CAD.

Note: all pictures were captured on a PlayStation 4 Pro using the game’s Photo Mode.