Innovation, Science and Economic Development Canada (ISED) has launched a consultation on the auctioning and licensing of 600MHz wireless spectrum — a low-band spectrum that provides significant range and is currently being used by T-Mobile in the U.S. to enhance rural coverage and expand its LTE network.

The spectrum packages would allow incumbents Bell, Rogers and Telus to broaden and improve their networks, while letting new entrants or regional providers make their networks competitive with the larger national brands.

In total, the proposed opening bids for the spectrum blocks being offered nationwide (shown below) is set at $1.537 billion CAD.

In total, the proposed opening bids for the spectrum blocks being offered nationwide is set at $1.537 billion CAD.

The consultation is the first step in the process towards the auction, which ISED Minister Navdeep Bains previously stated would likely proceed to take another approximately two years before actually coming to fruition.

ISED notes in the consultation that it has three main objectives for the allocation of this 600MHz spectrum: fostering innovation and investment, supporting sustained competition “so that consumers and businesses benefit from greater choice” and facilitating deployment and availability across the country, including rural areas.

To this point, ISED is proposing competitive measures that will give smaller players a fighting chance.

ISED wants to set aside 30MHz of spectrum for bidding by only non-incumbents, classified as those that have less than 10 percent of national wireless subscriber market share. 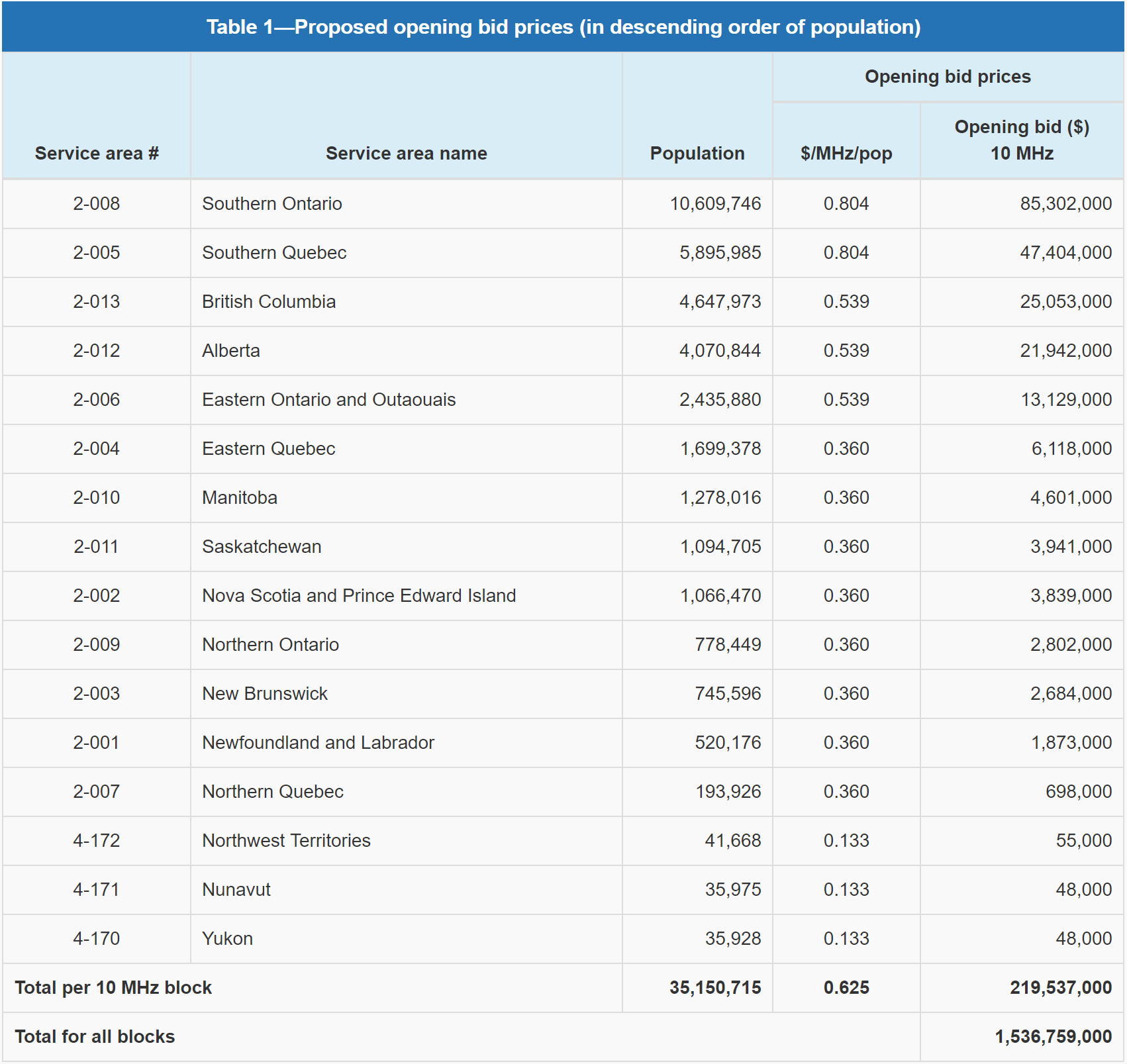 The regional providers that will benefit from this set aside spectrum must also be facilities-based providers with existing infrastructure that are are “actively providing commercial telecommunication services to the general public in the licence area of interest.”

A similar strategy was used in the U.S., with its government setting aside 30MHz for smaller players in the American 600MHz auction.

The remaining 40MHz would be open to all bidders.

With the minimal technical requirement for 4G LTE being a paired 5+5MHz block, the ISED notes that it has seven paired 5+5MHz spectrum blocks in the 600MHz band.

The ISED is proposing those seven blocks of paired spectrum be auctioned in 16 service areas across Canada, mainly in the larger areas listed under “Tier 2” on ISED’s page showing service areas for competitive licensing, but in smaller, localized areas in the Yukon, Northwest Territories and Nunavut.

ISED wants to set aside 30MHz of spectrum for bidding by only non-incumbents.

As in previous spectrum auctions, ISED is proposing the use of anonymous bidding.

The process of bringing this 600MHz to market has been a long one. The spectrum was first identified to be considered for release in 2013, and in 2015 the ISED entered into a partnership with the U.S. Federal Communications Commission (FCC) to work together on re-purposing the spectrum, which was formerly used for TV.

Since then, the U.S. held its own 600MHz auction in April of this year, with T-Mobile the major winner. The market situation in the States, however, differs significantly from Canada. In the U.S., there’s more of a separation between U.S. broadcasters and wireless providers, while in Canada major players Rogers and Bell own stakes in both, making the situation less cut and dried.

In June 2016 following a rousing speech at the Canadian Telecom Summit, Vidéotron president and CEO Manon Brouillette told MobileSyrup that the 600MHz spectrum should be auctioned in an “equitable” and “fair” manner and that the government should recognize that all service providers do not have the same challenges.

There’s also a strong chance Shaw-owned Freedom Mobile will be interested in the spectrum to add to its still-new LTE network. Recently, the carrier purchased seven 700MHz and 2500MHz spectrum licenses from Videotron.