The state of RCS messaging in Canada, explained 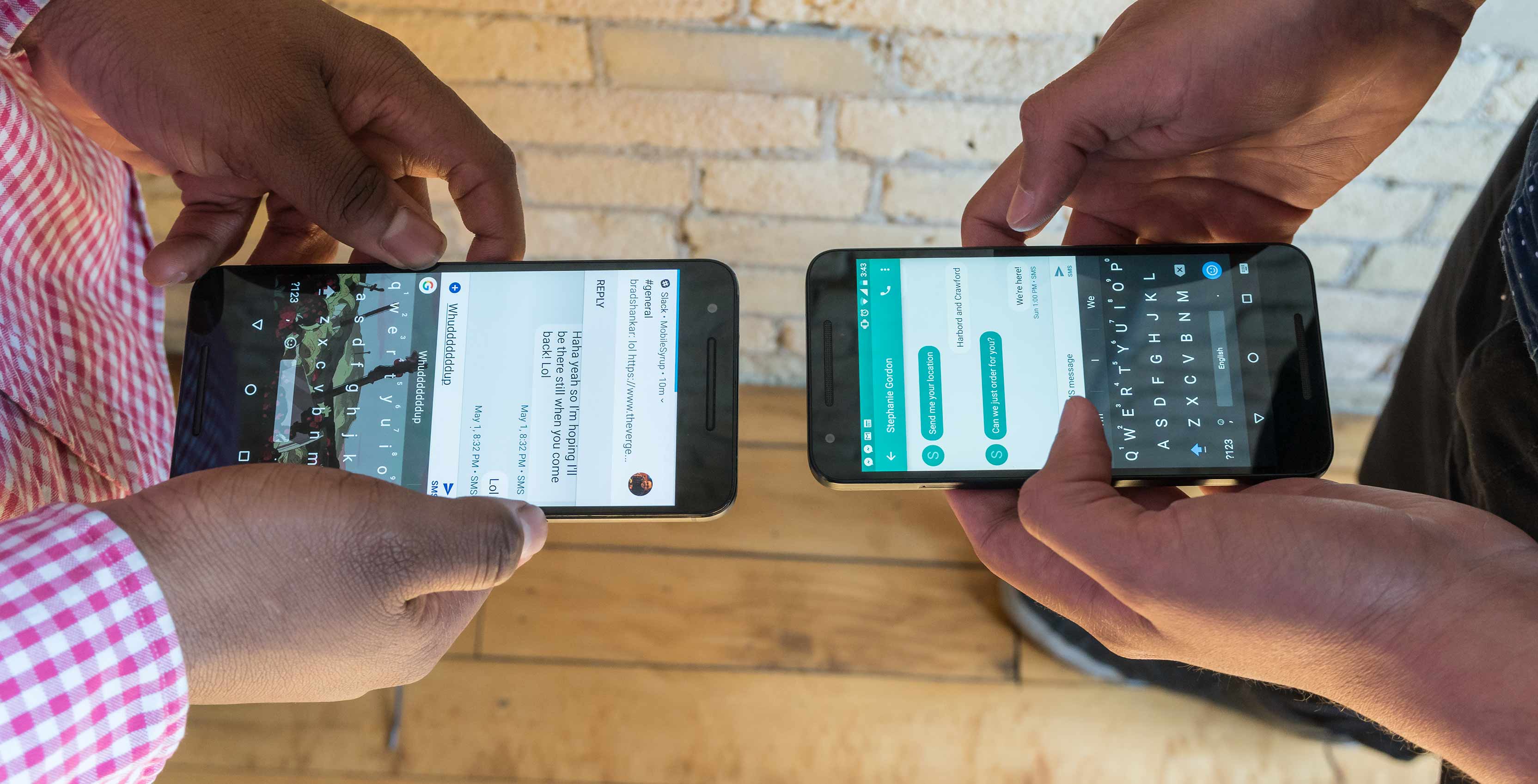 Short for Rich Communication Services (alternatively known as Advanced Messaging), RCS is a next-generation SMS messaging protocol. It allows users to take advantage of a number of features that were previously exclusive to over-the-top messaging apps like WhatsApp and iMessage.

For instance, when messaging a friend or family member, RCS users will see typing indicators and read receipts (it’s possible to turn both these features off in the Android Messages preferences menu). RCS also enables proper group chat, as well as allows users to send high-resolution images and videos.

Moreover, unlike SMS messages, RCS messages are sent via the user’s data connection or a nearby Wi-Fi link.

Who are the major stakeholders behind RCS?

Within the Canadian context, there two major groups working toward making RCS a success beyond the usual cast of carriers.

First, there’s the GSMA. It’s a trade body that represents the interests of carriers across the globe. Every major Canadian carrier, including Bell, Bell MTS, Eastlink, Freedom Mobile, Rogers, SaskTel, Telus and Videotron, is a full member of the organization. Additionally, the three national carriers have all pledged to support RCS. When Rogers launched support for RCS last December, it became the second carrier in the world to support RCS in its current iteration.

Google is the second major stakeholder in RCS. In some ways, the company helps provide the glue that enables the ecosystem. In 2015, the company acquired Jibe Mobile. Jibe’s product became the basis of Google’s Android Messages platform. Earlier this year, the company announced that several major smartphone OEMs, including HTC, Sony and Motorola, have agreed to install Android Messages on all their future devices.

Missing from the list is Samsung. The world’s biggest Android manufacturer does not plan to ship Android Messages pre-installed on its devices. Instead, it’s working on its own RCS solution. However, the company’s native RCS app will be compatible with all other RCS solutions, including Android Messages, due to the fact it too will built to comply with the GSMA’s Universal Profile.

In practice, the requirements to take advantage of RCS are straightforward. As the end user, you need:

a) An Android smartphone.

b) A data plan with a carrier that supports the protocol.

c) The Android Messages app (or another app that supports Univeral Profile — more on that in a moment).

Additionally, the person you’re messaging also needs to meet all of the above requirements. When both parties don’t meet all the requirements to take advantage of RCS, apps like Android Messages revert to SMS/MMS. From the user’s perspective, this part of the experience is seamless.

Where things get complicated, at least currently, is that few carriers support RCS. At the time of the writing of this article, only Rogers and Fido support the protocol in Canada.

Does Android Messages work with other RCS apps?

While the number of RCS-enabled apps may eventually prove confusing to end users, they’ll all be compatible with another. That’s because every modern RCS app, including Android Messages and Samsung’s upcoming native solution, is built on top of the GSMA’s Universal Profile standard.

“Whoever does RCS is working with a standard,” says Surhangi. “In the case of Samsung, they have a native experience on their devices and those devices are tested on our backend and they work just fine. We already work with Samsung in different regions that has a native experience, users can either use that native experience or they can download Android Messages. Both are standards-based and will work out of the box.

How many Canadians are currently using RCS?

According to Rogers, there are currently a 125,000 RCS users on its network. To put that number in perspective, during its most recent earnings call, Rogers announced it had 10,274,000 wireless subscribers across all of its brands.

Google, meanwhile, said it couldn’t provide aggregate data, at least not yet, due to the fact that said data is owned by the carriers. That said, it’s unlikely the aggregate numbers are much higher.

Again, for users to take advantage of the features that come with RCS, not only do they need to be on a carrier that supports the protocol, the same applies to the person they’re messaging. With only two carriers supporting the protocol in North America at the moment, and neither of them in the same country, even the most tech savvy user is unlikely to see a huge benefit from downloading Android Messages.

That said, Surhangi did note that Google has seen strong engagement among those users who are using Android Messages. Moreover, he says RCS will hit critical mass in the not too distant future.

“Sometime in Q1 or Q2 of next year, you’re going to have a very large percentage of users that will have access to RCS. They’ll be able to either buy a new phone or download the app on their existing phone.”

Surhangi did name specific companies, but he did intimate that a number of other major North American carriers, both in Canada and the U.S., will announce support for the protocol before the end of the year.

How secure is RCS?

RCS employs client-to-server encryption, which is the same encryption model Google uses for Gmail. Any message sent via Android Messages is encrypted on device before being sent out to one of the company’s servers. Once the message arrives at said server, it’s decrypted by the company. Google then encrypts the message again before sending it to its intended recipient. While the message is unencrypted, the company can, much like it does with emails sent through Gmail, mine it for data that’s relevant to its business.

How do RCS and Google Messages fit within Google’s messaging strategy?

As with anything messaging-related, how RCS fits within Google’s overall strategy is complicated. One point Sarhangi is quick to reiterate multiple times throughout our interview is that RCS “is not a Google service.” He repeated that same point four times during our 20-minute phone interview.

On the other hand, when we asked Rogers how messages routed through Android Messages are administered, Saini said, “It’s a Google managed service,” later adding, “Google’s role is very large.”

Based on the contrast between Sarhangi and Saini’s comments, it appears there’s some difference between how Google sees its role within the RCS ecosystem and how a carrier like Rogers sees that relationship. It’s unclear if other carriers that plan to implement RCS share a similar viewpoint. However, what is clear is that Google wants to be very careful about how it manages the optics of Android Messages.

Whether or not Android Messages is a “Google Service” does little to change the fact that if you’re an Android user, you have one more messaging app you now have to download. For better or worse, that’s unlikely to change anytime. Speaking to the existence of Allo, Sarhangi said he doesn’t see overlap between the company’s different messaging offerings.

“We want to serve users in different ways when it comes to messaging. With Android Messages, our roadmap of what we plan to do very much aligns with the needs of the end user but also very closely with the needs of carriers and the GSMA. It’s not Google service, and it’s not a Google roadmap.

“Think of us essentially as being part of the ecosystem and providing technology and capabilities to carriers. At the end of the day, it’s the carrier service and brand that ends up providing that to the end user. With Allo, it’s much more of a Google service and we’re innovating and working directly with users in a slightly different ways.”

The state of RCS in Canada is likely to change dramatically over the coming weeks and months. As such, MobileSyrup plans to update this piece as things change. In the meantime, if you have additional questions, feel free to ask them in the comments section.

To compile this article, MobileSyrup interviewed Amir Surhangi, head of the carrier messaging program at Google, and Upinder Saini, vice-president of wireless product management at Rogers.