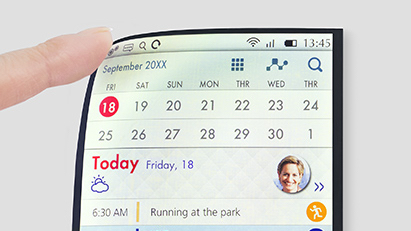 Japan Display, the company that provides Apple with the majority of the displays it uses to build the iPhone, announced a new 5.5-inch display that can be bent like OLED screens from Samsung and LG.

While not as flexible as the OLED panels produced by its South Korean competitors, Japan Display’s “Full Active Flex” screen is supple enough that it can be used to create a smartphone like the Galaxy S7 edge, according to its chief operating officer, Shuji Aruga. The display is also significantly cheaper to manufacture than an OLED display because Japan Display used existing LCD technology to build it.

Past LCD screens were brittle because they used glass in their construction. Japan Display got around that problem by incorporating plastic between both sides of the liquid crystal layer.

Japan Display says several smartphone OEMs have agreed to purchase the displays at scale when mass production begins in 2018. The company also says it hopes to sell the technology to automotive and computer monitor manufacturers.

Apple has reportedly been planning to switch to OLED panels for some time now. However, it’s believed that even if both Samsung and LG were to offer their entire OLED assembly lines to Apple, the two companies couldn’t manufacture enough displays to meet demand for the iPhone. Japan Display’s LCD screen gives the company another option when it comes a curved screen smartphone.