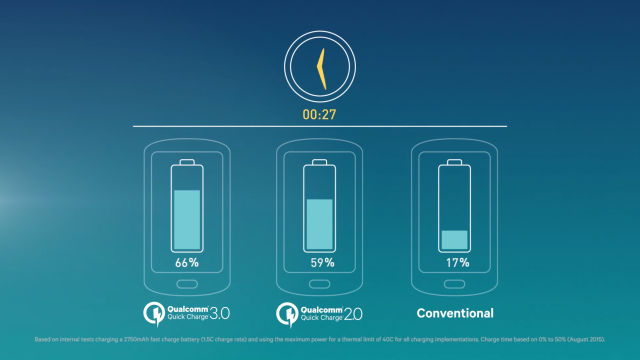 In between detailing its new line of Snapdragon SoCs, including the flagship Snapdragon 820, Qualcomm today announced an update to its Quick Charge standard.

Now on its third iteration, Qualcomm says that Quick Charge 3.0 is able to refuel a smartphone battery from 0 to 85 percent in 35 minutes. That’s all thanks to a new software algorithm called Intelligent Negotiation for Optinum Voltage (INOV) that’s better able to deliver the correct amount of voltage when a device needs it most.

According to Qualcomm, Quick Charge 3.0 smartphones will work with Quick Charge 2.0 and 1.0 devices, though you’ll need a need a new phone and charger to take advantage of the improved speeds.