I don’t follow boxing, but I’ll certainly Periscope it 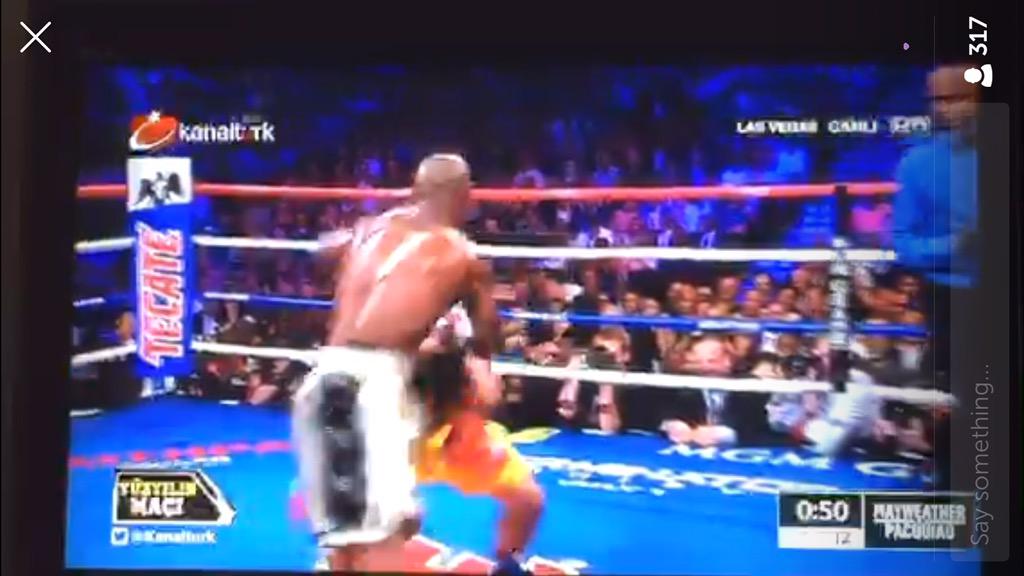 This weekend featured what I heard described as “The Fight of the Century,” a boxing match between two of the best-known fighters of our time, Floyd Mayweather and Manny Pacquiao. I can’t really give you any more detail than that about the fight itself, because I am not a fan of boxing. However, I am considered to be the “tech” guy in my social circles, and so I am often asked to solve technical problems when they arise.

Normally, when live pay-per-view sporting events like this are happening, people who want to watch either go to a crowded bar that pays for the broadcast, or huddle around the television of that guy who REALLY likes boxing. The other, seedier option, is to google something like “Live boxing streaming Mayweather vs Pacquiao” and peruse the results looking for anything that is decent video quality. I’ve tried to do this with Super Bowls in years past, but I’ve never been satisfied with the results.

On this night though, I was armed with the knowledge that two new live-streaming apps, Periscope and Meerkat, had been recently released. These mobile streaming apps have been taking the world by storm, being particularly useful when you want to share something with a large audience around the world.

Looking in the global section of Periscope, almost every stream had the words “boxing”, “Mayweather” or “Pacquiao” in them. Some were just views of the fight night parties, or people giving commentary about the match. One was a developer in San Francisco trolling people with a Sonic cartoon. But a surprising number of streams featured very clear, robust views of the fight, with the camera trained steadily on a TV broadcast.

I should make it clear at this point that I didn’t want to be held responsible for finding a good connection to this video (tech-savvy people know what I’m talking about), but in the end, I decided to see if I could do better. After six or seven rounds of dying streams, glitches and terrible video quality on our connected laptop, I decided to open up Periscope and look for anybody who might be aiming their phones at a TV showing the real feed.

I continued jumping around from stream to stream looking for the perfect view, while efforts on the connected television were consistently underwhelming. I also opened Meerkat to take a look at the kinds of results you could expect, but it was a lot harder to find what I was looking for. Presumably I could have searched for the fight itself, but having performed many keyword searches on social media, I know the amount of noise generated when a trending topic is popular.

After a minute, I gave up on Meerkat and switched back to Periscope. Myself, along with 600 or so other people, watched most of the 11th and the whole 12th round without a single stutter. For the last minute of the last round, and for the judges’ decisions, we muted the TV and those who were interested gathered around my phone to hear that Mayweather won by unanimous decision. At that point, the Pacquiao fan who had been so generously sharing his screen with us swore, and abruptly ended the stream. As quickly as the adventure had begun, it was over.

I’ve watched a number of Meerkats and Periscopes in the last 2 months, and some shortcomings notwithstanding (like vertical-only video in Periscope’s case), I have been very happy with the results. I even watched with 12,000 other people last week as one of the founders of Periscope gave a virtual tour of their office and answered questions about new features. It is very refreshing to hear news in such a personal manner from the involved parties directly, kind of like having an author read you their book. In addition to discussing upcoming updates, concerns about abuse reporting and copyright infringement were also addressed head-on.

Speaking of copyright, one of the things I noticed throughout the fight was that one of the ways Periscope seemed to be dealing with these technically illegal streams was to look at which streams were getting liked a lot (you can tap the screen during a broadcast to send a virtual heart to the streamer), and shut down the ones showing the fight. This led to many commenters repeating that people should “stop sending hearts” for fear that they would get flagged for removal.

There have been a number of press releases banning the broadcasting of television like Game of Thrones, or of MLB or NHL games live from the stadium. However, having seen this technology in action, I don’t think the experience could ever expect to replace the real thing, nor should it seek to. I think there is value in these kinds of broadcasts, bridging regional barriers and opening live events up to a much larger audience than it would have otherwise received. This kind of broadcast could easily be the future of news, storytelling, and, for in some respects, journalism as a whole.

As for whether Meerkat or Periscope will win out in the end, or whether another service entirely will usurp them, that remains to be seen. Each service is doing its best to keep up with the other: Meerkat doesn’t get access to Twitter social graph (but it can now share to Facebook), and Periscope doesn’t yet handle landscape video, or have an Android app. The lasting impact of this first wave of mobile streaming apps may well be the new, better services that rise up from this innovation.