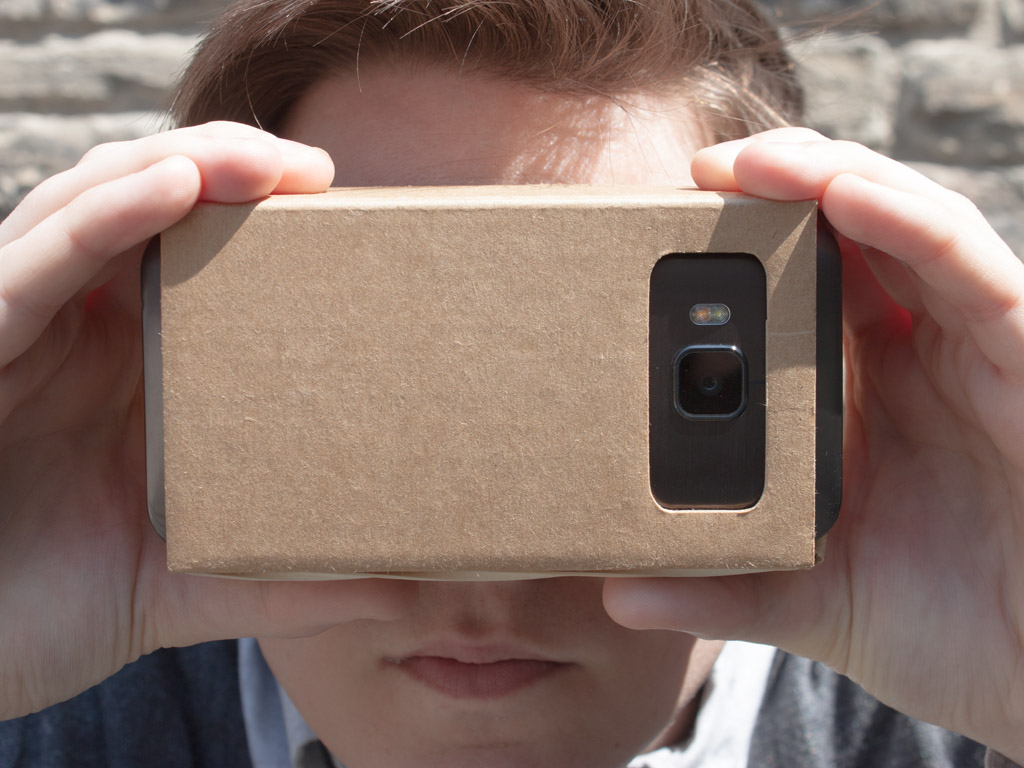 What’s also interesting is Google Cardboard was developed as part of the company’s 20% Project, a system that allows employees to spend a small amount of their work day developing side projects alongside their normal duties. Other popular Google platforms such as Adsense and even Gmail were also created under this system.

What sets Google Cardboard apart – which was released at Google I/O almost a year ago – from other VR headsets is it costs only $20, and can be used with any Android smartphone. Furthermore, the device is made almost entirely of cardboard, except for a magnetic circle resembling a small silver washer attached to one side, an elastic that holds your smartphone in place, and two lenses. 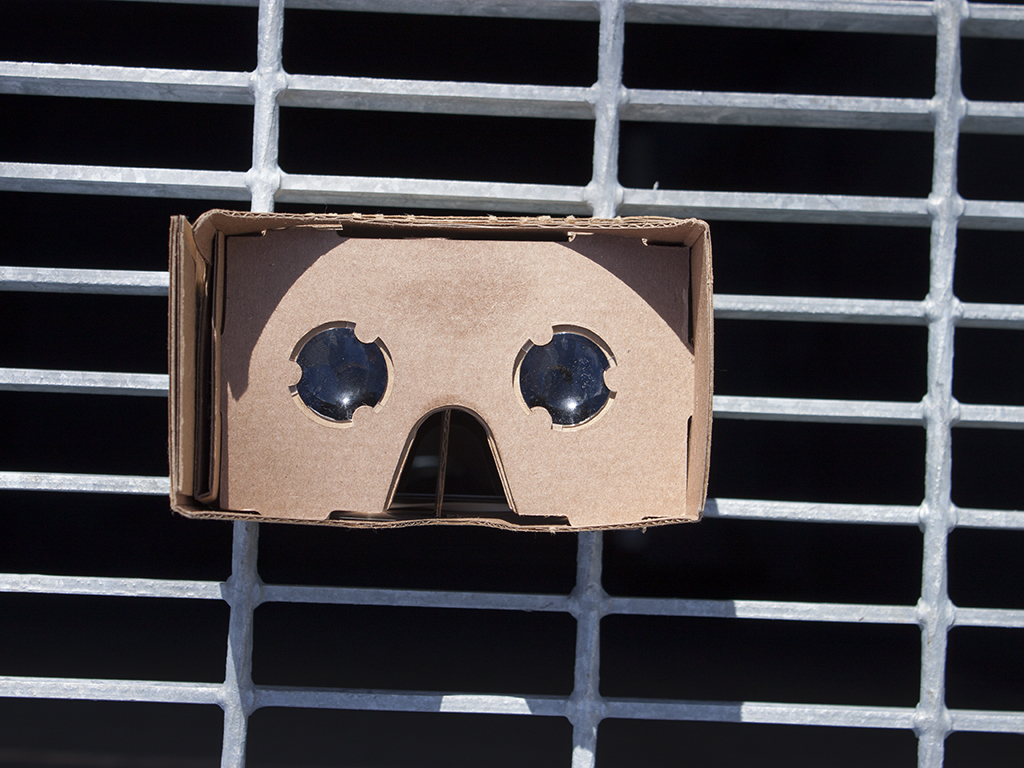 The magnetic circular mechanism is used as a lever-like button in some cardboard games where a level of interaction with the touchscreen is required. The construction process involved with creating Google Cardboard is also relatively straightforward and can be completed in as little as 15 to 20 minutes, depending on how good you are at following instructions (I’m not, and it took me about a half hour to build it for the first time).

After building the headset, all you need to do is download one of the many Cardboard apps available on the newly-curated section of Google Play Store, slide your smartphone into the slot on the front of your newly created shell, and enjoy a VR experience that’s surprisingly comparable to more purpose-built virtual reality headsets.

And while many of the games and “experiences” currently available on Google Cardboard are little more than elaborate tech demos, a few of them stand out from the pack and are a perfect way of experiencing VR on a budget.

These apps might not be “games” in the traditional sense, but they’re certainly compelling enough show off what VR is capable of. 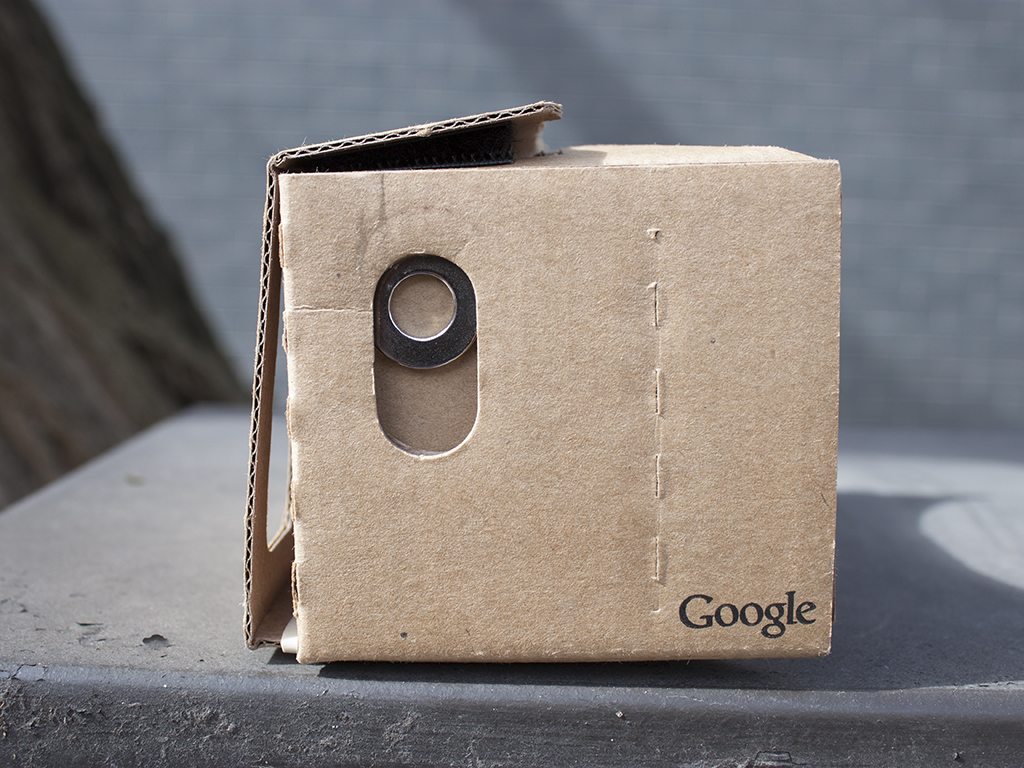 While relatively simple, Zombie Shooter VR is surprisingly frightening, thanks to the game’s first-person perspective enhanced by VR’s enveloping nature. Zombie Shooter VR follows the mold of a traditional on-rails shooter – the player is guided through a derelict subway brimming with vicious zombies.

In order to attack an enemy in Zombie Shooter VR, you’re required to turn your head and look at the zombie you want to take down for a few brief seconds. The game’s undead creatures are also able to lunge at you from all angles. This requires constant head rotation to ensure your head is constantly moving around (which often looks hilarious to anyone watching you play the game).

Zombie Hunter is a great first game if you’re looking to show Google Cardboard off to your friends or family. Its action-oriented tone, familiar enemy (zombies) and straightforward concept, combine to create a surprisingly compelling experience. 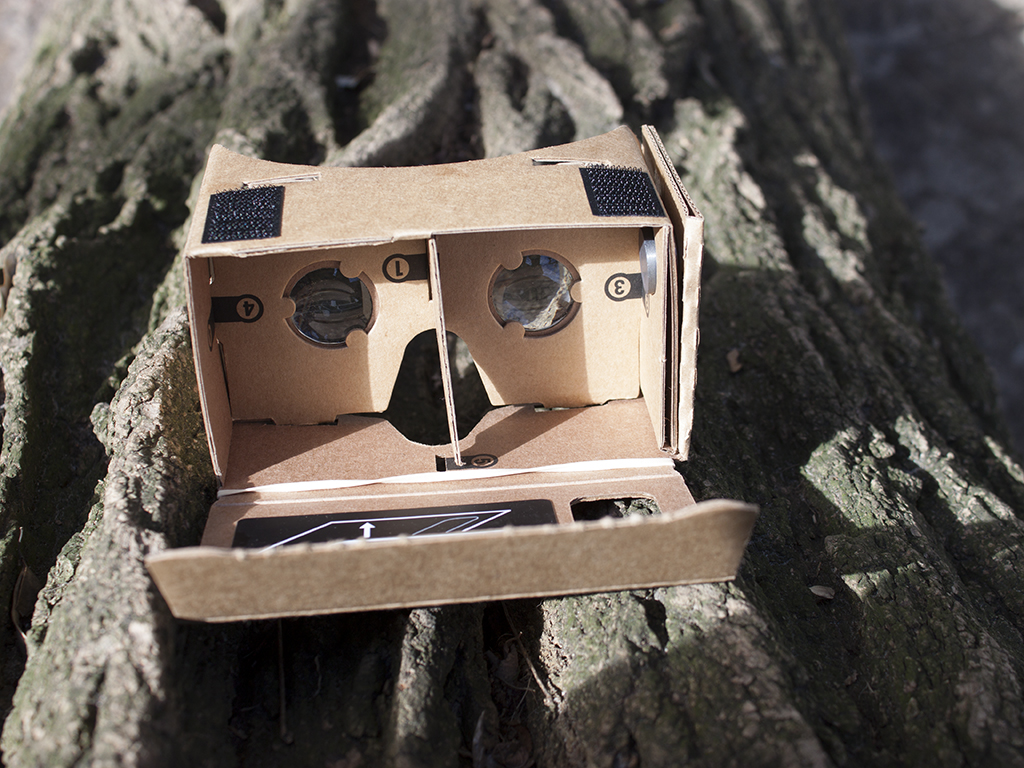 Rocket Drop VR might not be a great “game,” but it does one thing very well – it shows off the immersive power of VR and how the technology can connect the player on a much deeper level than what has ever been possible before.

In Rocket Drop, the player falls from the sky with their virtual head facing downwards. During my time with the game I received an almost scary sense of vertigo that actually sped up my heart rate in the real world, as I plummeted towards the earth from a first-person perspective.

In this title you’re able to move left and right by tilting your head in order to fly through yellow fuel containers and also dodge incoming missiles. Pressing the button on the side of Google Cardboard also gives you a speed boost. But similar to many other Cardboard titles, the player has very little control over what’s going on in the game.

This is in part due to the limitations of the platform. Since Google Cardboard is only a basic VR headset body, and doesn’t include an accompanying gamepad or other input device, developers are only able to design their games around what direction the player is looking in.

Still, for first-time VR users, Rocket Drop is a visceral shock and a perfect example of the level of immersion the technology is capable of. 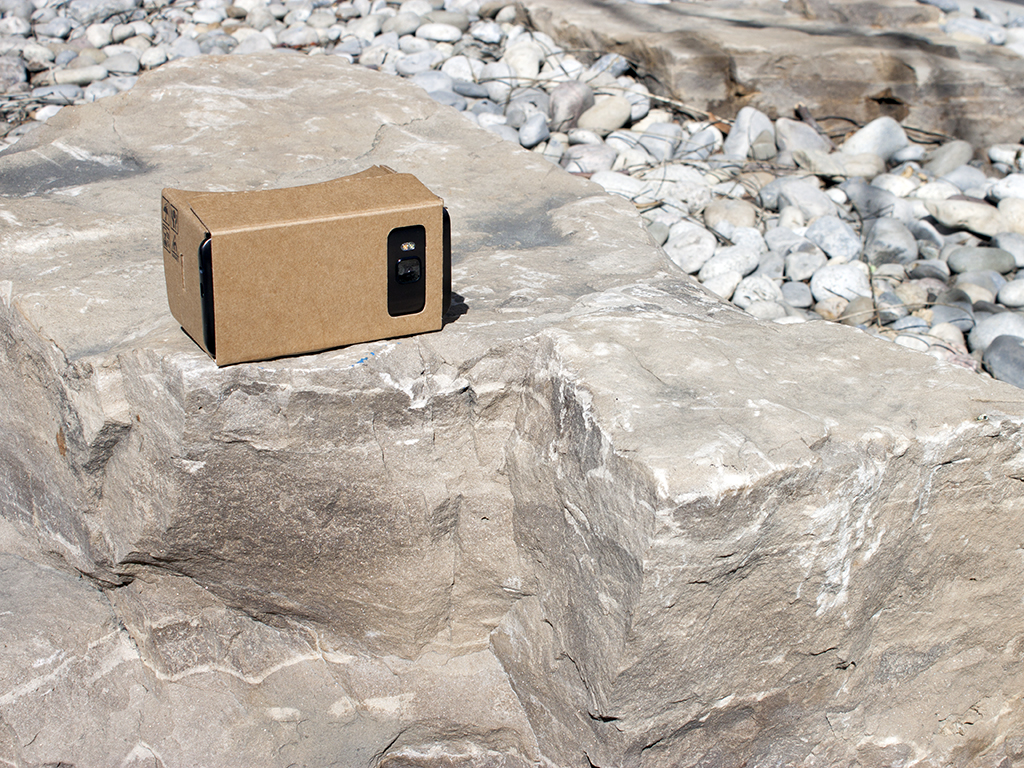 Similar to Rocket Drop VR, VR Cosmic Roller Coaster tethers the player to a rollercoaster through a first-person perspective, except this rollercoaster is blasting through the cosmos at extremely fast speeds.

The player is able to look around in any direction, taking in the sights of deep space, speeding the coaster up by staring at one specific location for an extended period of time. The level of interactivity with this title is less than ideal, but similar to other Google Cardboard apps in this story, Cosmic Roller Coaster is a perfect way to show off what the platform is capable of. 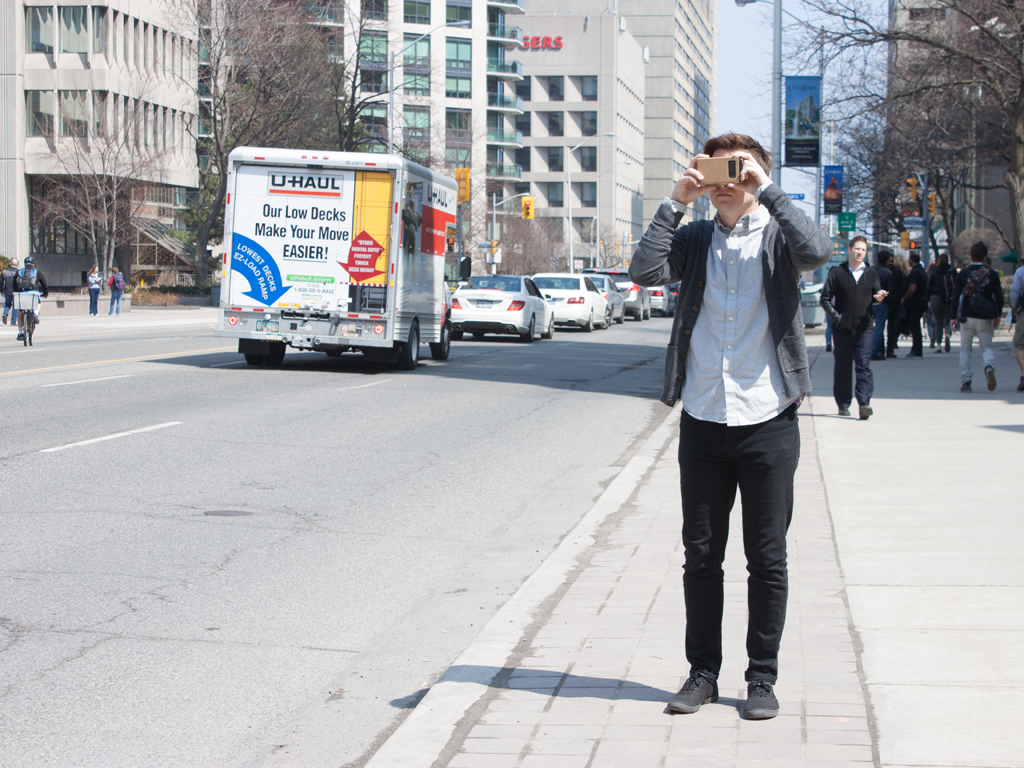 VR is often seen as silly, but give it a try (you might be surprised)

There are numerous other games available in the special Google Cardboard section of the Play Store.

Paul McCartney Experience (which you need a high-end smartphone for) gives the player a first-person perspective of the famous Beatle playing a piano at a concert, bringing the wearer infinitely closer to the concert experience.

Even the standard Google Cardboard demo offers up a decent example of what VR technology could be used for in the future. Other titles like the terrifying Sisters (almost any gaming experience is scarier when played with a VR headset), Refugio 3D Space Station and Roller Coaster VR, are also interesting.

Google also recently announced that they’ve acquired Tilt Brush, a game originally designed for the Oculus Rift that allows players to 3D doodle within a VR experience. The concept of Cardboard is also being taken to another level, allowing other manufacturers to create Google certified Cardboard devices that automatically adjusts your phone to the optic settings of the headset, all through a QR code.

When giving Google Cardboard a try, it’s important to set your expectations appropriately. The low-cost headset certainly has issues. One is that it doesn’t come with a strap to keep the device attached to your face, forcing you to always have one hand on the device when holding it against your head.

Apparently the built-in accelerometer sensors in smartphones aren’t powerful enough to track quick head movements, so Google’s Cardboard team opted to require the wearer to hold the device against their head at all times, forcing the user to move their entire body instead of just their head. According to Google this creates a less disorienting experience, and was a way to circumvent the technical limitations of Android smartphones.

You aren’t going to find deep gaming experiences on the Google Cardboard marketplace, at least not yet – but even when compared to the Oculus Rift and Project Morpheus (two headsets I’ve tried), Google has created an affordable way to experience what could end up being the future of gaming.