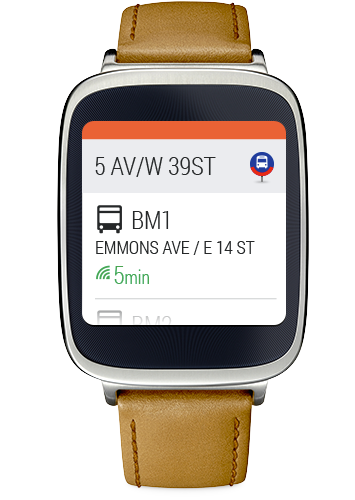 Moovit has been offering crowdsourced transit information to Canadians for more than two years, and now the company wants you to be able to use its service without even needing to take out your phone.

The popular transit app has just announced plans for Android Wear and Apple Watch apps, the latter of which will launch alongside Apple’s first wearable. Of course, as with any app making the jump from pocket to wrist, not all of the functionality of the smartphone app will be offered through the smartwatch.

Moovit said in a statement this week that it believes wearable devices “are built to show just the right information at just the right time.” As a result, Android Wear and Apple Watch users will only be shown the closest transit stops as well as service alerts, and live itineraries based on nearby lines of favourited routes.

Now for the bad news: it sounds like Android Wear users may actually have to wait longer than Apple Watch users to get their hands (or wrists, rather) on the app. Moovit says the Apple Watch version will launch at the same time as the device itself while the Android Wear version will hit the Google Play Store “in Q2.” Of course, with the Apple Watch scheduled for release mid-April, it’s possible that the two will arrive together. We’ll let you know as soon as we hear anything more solid about a release date.