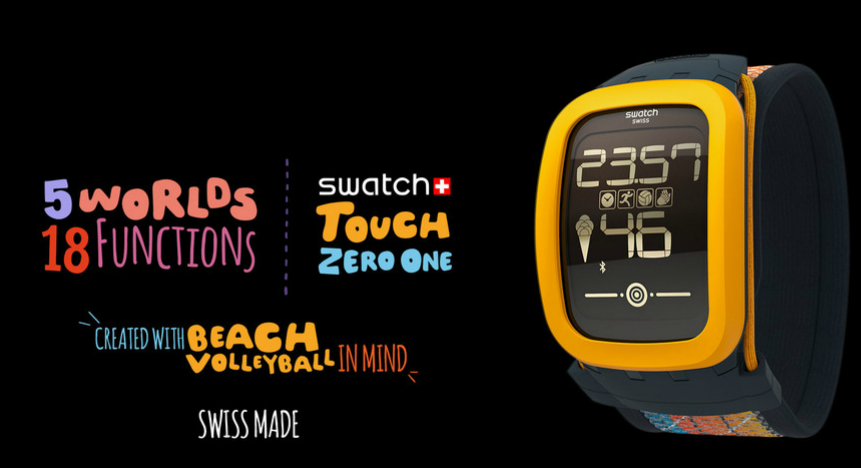 We first got wind of Swatch’s plans to add fitness functionality to the Swatch Touch line way back in August of 2014. At the time, the company confirmed that it would be making a smartwatch but that it wouldn’t be until 2015. Now, with 2015 well and truly underway, the company has finally announced its new Touch watch.

Dubbed the Touch Watch Zero One, Swatch hasn’t gone totally overboard on the ‘smart’ aspects of this time piece. It doesn’t run Android Wear and it won’t show you notifications from your phone. Instead, the company has taken the Swatch Touch and added sensors that can track the movements of volleyball players. Specifically, beach volleyball.

“Beach Volleyball is played all over the world, on beaches and in stadiums filled with huge crowds stomping their feet and clapping their hands as the action kicks up thrills and chills,” Swatch said in a statement. “Swatch Touch Zero One takes the already popular Swatch Touch one step further, adding great new functions to pump up the excitement for both players
and fans.”

The watch is capable of tracking the power of one’s strikes and spikes as well as claps, steps taken during the game (and therefore distance traveled), and calories burned. All of this can be synced with a phone app that will display the data, rate of performance and coaching help.

The Swatch Touch Watch Zero One will reportedly cost $160 when it launches later this year. There’s no specific release date just yet.

Swatch is developing its own operating system to take on watchOS, Android Wear