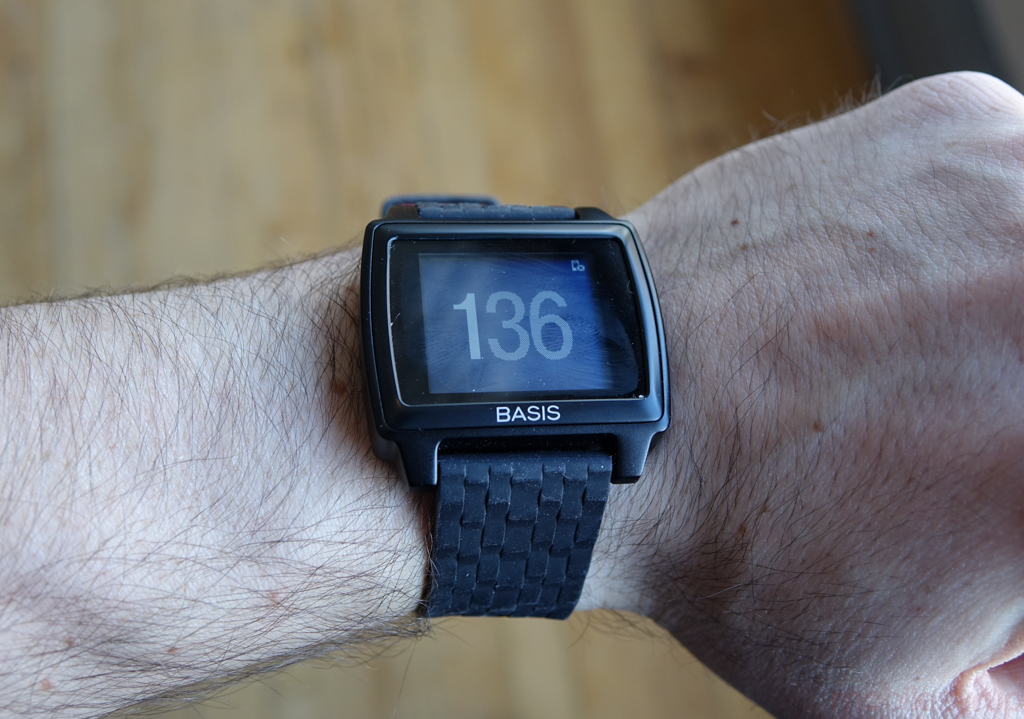 What makes a smartwatch these days? Is it the presence of notifications, or the ability to measure steps and track sleep quality? Is it the existence of a developer kit for apps?

While accessories like the Fitbit Flex and Jawbone UP are still around, in their second or third iterations they are increasingly becoming platforms for synthesizing data.

It is no longer satisfactory to just do one thing. The wrist is a becoming a valuable commodity, and companies not named Apple or Samsung will need to work tirelessly to maintain brand loyalty to maintain that coveted spot.

Basis is a company that started out creating single-purpose products for enthusiasts: a sleep monitor, a heart rate tracker, a fitness band. Then, in March 2014, the San Francisco-based outfit was purchased by none other than Intel, which has spent years building up its cache in the wearables space. The Basis Peak is the first wearable to come out of that collaboration, and it’s a testament to focus and fitness. It’s not a great smartwatch, but is one of the most useful wearables I’ve ever worn — and that’s saying something. 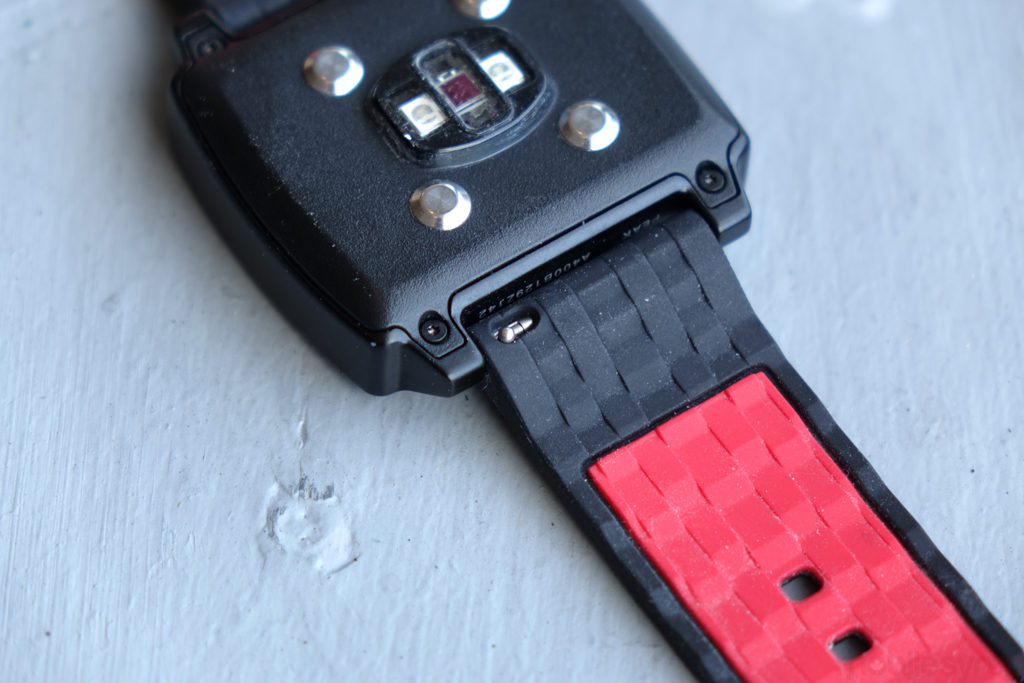 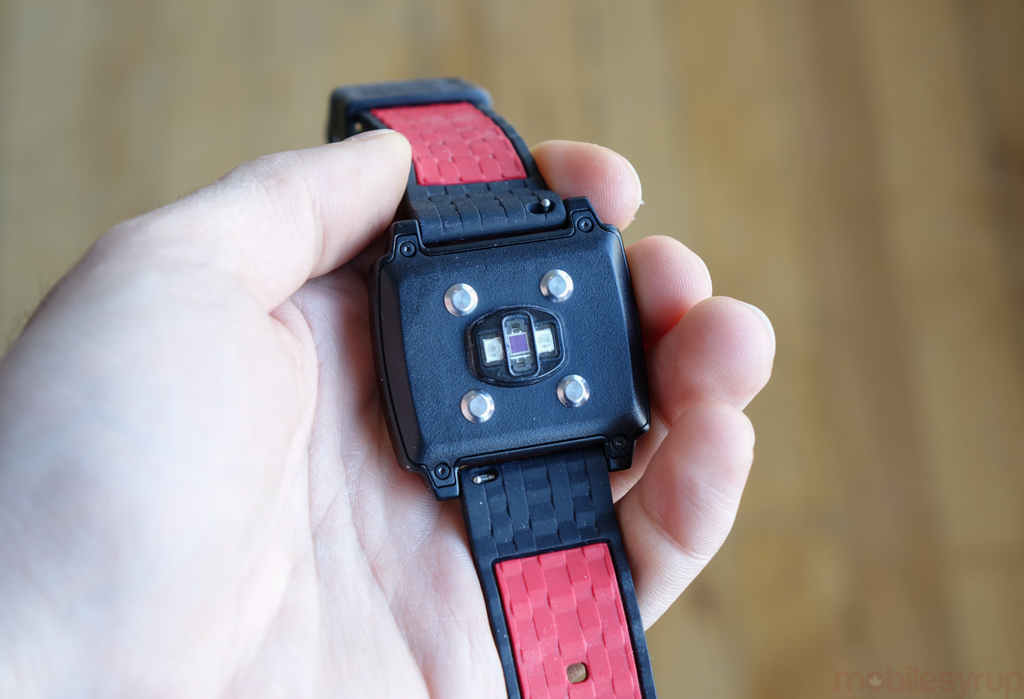 At its core, the Basis Peak is a fitness band. When it shipped late last year, there was no smartwatch functionality at all — just a Bluetooth connection to your phone, a bunch of sensors, and a well-made waterproof plastic housing with a touch-friendly e-ink display.

The Peak shares more in common with hardcore fitness wearables like the Garmin Vívoactive, Epson Pulsense and TomTom Multi-sport bands, all of which track heart rate continuously, than it does with the well-known step trackers from Fitbit and Jawbone. Its continuous heart rate monitor works alongside various sensors — galvanic skin response, skin temperature, accelerometer — to determine type of movement, automatically entering into tracking a workout. 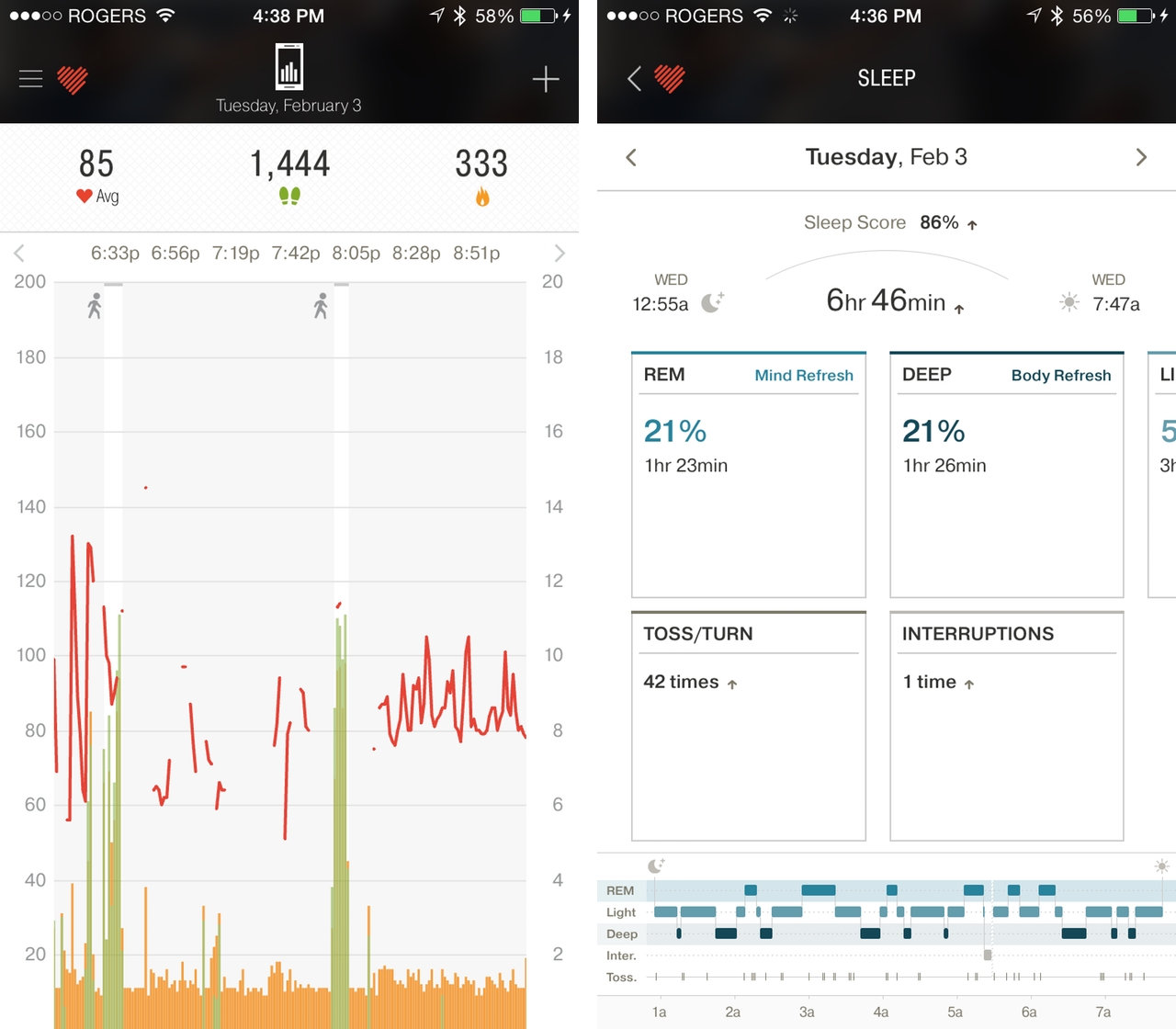 Basis claims Peak is smart enough to know the difference between a run, a walk and a bike ride, and will automatically begin tracking it. I found this to be accurate most of the time, though it did miss the beginnings of the occasional run or bike ride. The tracking itself, while rudimentary on the watch, is data-thorough and rewarding, with excellent iOS, Android and web charting.

The mobile apps have elements of poor design, but have improved over the course of my using the Peak, and should continue to over time.

Peak also automatically tracks sleep, which is helpful (and essential) when one tends to forget (like me) to begin tracking before bed. Like its competitors, Peak tracks restful and waking periods of sleep and charts it in graph form, though there is precious little one can do with the data except export it to a spreadsheet. The tracker tended to be too sensitive to restful periods such as lying on the couch after work, determining that a 43-minute episode of The Sopranos was in fact a short nap. It’s also not possible to edit that information on a smartphone, so it takes navigating to My Basis on the web to fix any data discrepancies. 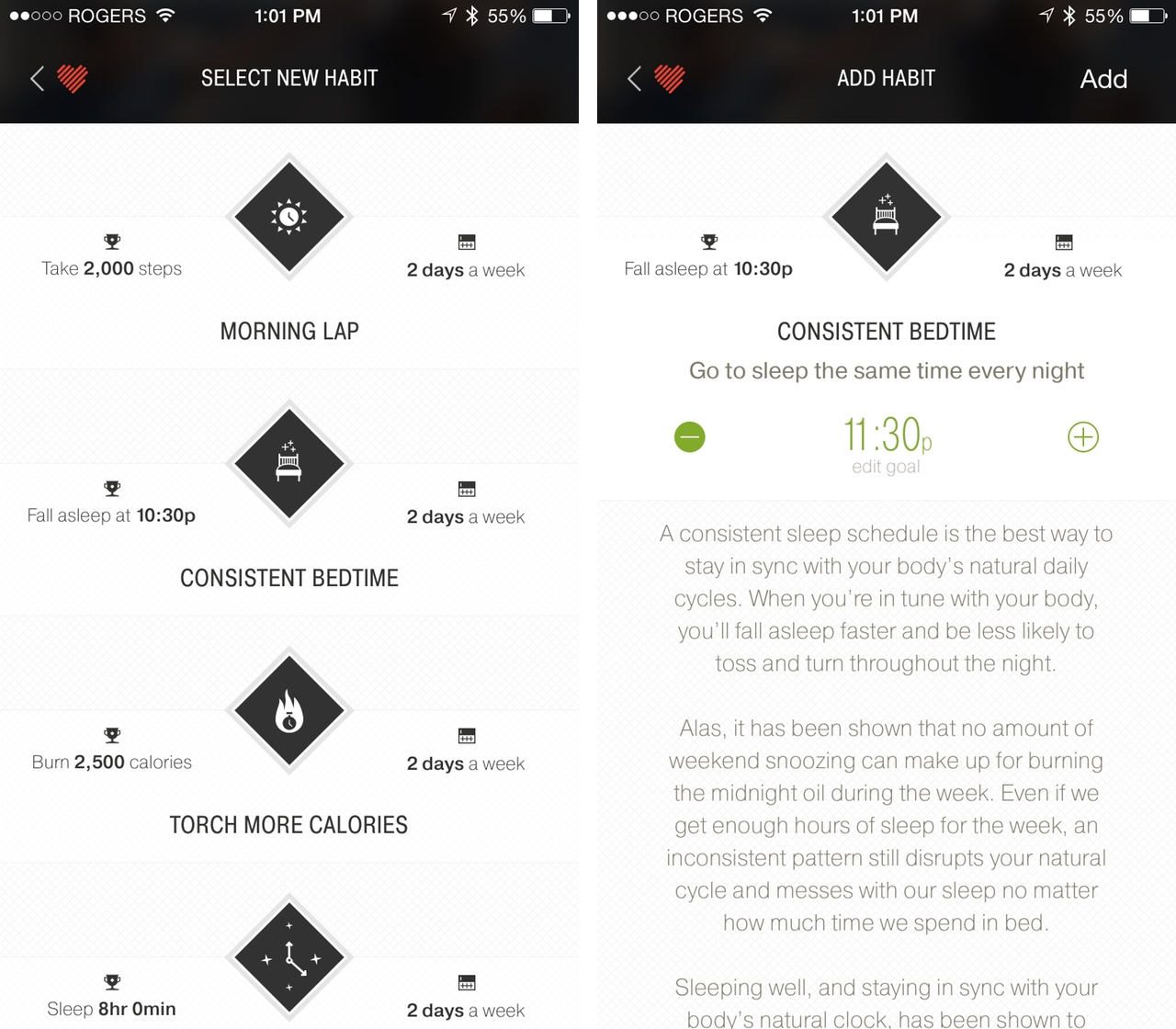 Basis wants to take advantage of one’s activity and sleep data to set habits — moving more during the day, going to sleep earlier — and will issue terse commands to the phone to achieve them. But like many push notification-based systems, this one is easy to ignore, and the lack of an on-watch equivalent fails to make up for it.

The Peak’s lack of frills is highlighted by a body that can take a beating and then some. The plastic frame is thick and sturdy, lacking buttons or any other potential points of failure. It charges by resting its magnetic POGO pins on a proprietary dock that is both light and portable. Its Gorilla Glass 3-covered touchscreen is also extremely scratch resistant, and the waterproof body is reassuring for the stated goal of having to wear it all the time. Basis even encourages users to clean it by wearing it in the shower.

And because the device uses a low-power system-on-a-chip and an e-ink display, the battery life regularly lasted between four and six days, long enough to take on a trip without the charger at all. 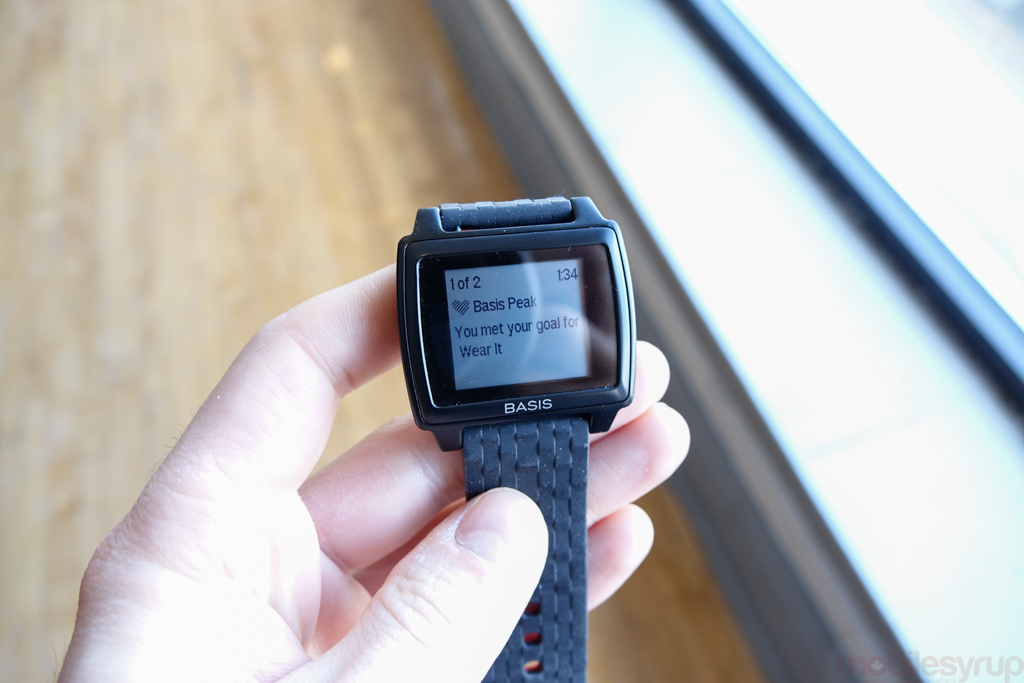 For a $350 fitness tracker, the Basis Peak has a lot of quirks. While it is comfortable to wear, and sports an easily replaceable strap, the lack of on-wrist data is frustrating. The watch face, if you can call it that, is large and digital — not a problem for readability, but the typography lacks refinement.

And while the casing is fully waterproof, immersing it in water makes the display itself go crazy. Movement of the water on top of the screen routinely turned on the backlight (which is accessed by swiping up on the right side of the display) and swiping through the various panels.

And those panels — total steps taken and calories burned — lack density or any variation. Why can’t I see any of my sleep information, or heart rate trends throughout the day? 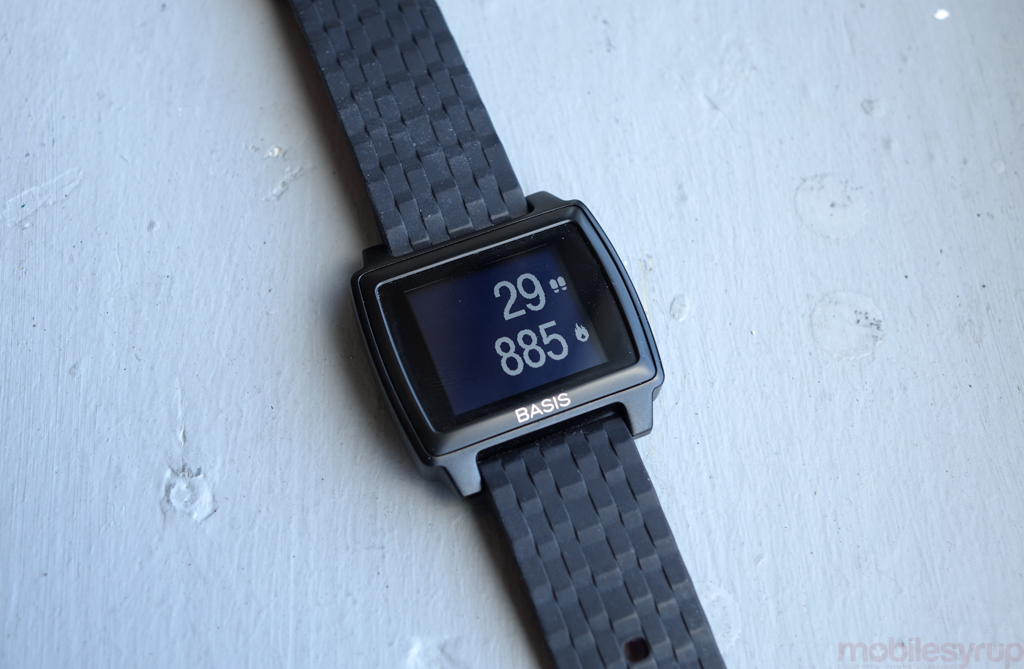 Similarly, the newly-added smartphone notifications features, which are limited to phone call logs, text messages and Mail.app emails on iOS and the same plus calendar reminders on Android, feel out of place and tacked on. For example, notifications cannot be viewed once they’re dismissed, nor is there a way to view them individually — they are arranged in a horizontal list that, like on Android Wear, needs to be cycled through. It’s laudable for a first-generation implementation, but don’t buy the Peak if you’re looking to triage all your notifications — its system simply does not suffice for that.

I had a tremendously difficult time maintaining a connection to the Peak from my smartphone. On both iOS and Android, the app would often not be able to “find” the device despite confirming a Bluetooth connection through the phone’s menu. This could usually be rectified by “forgetting” and reestablishing a link to the Peak, but this issue happened dozens of times, often in the same day. When synchronization worked, it was flawless, and usually without my intercession, but maintaining a connection shouldn’t be this difficult. 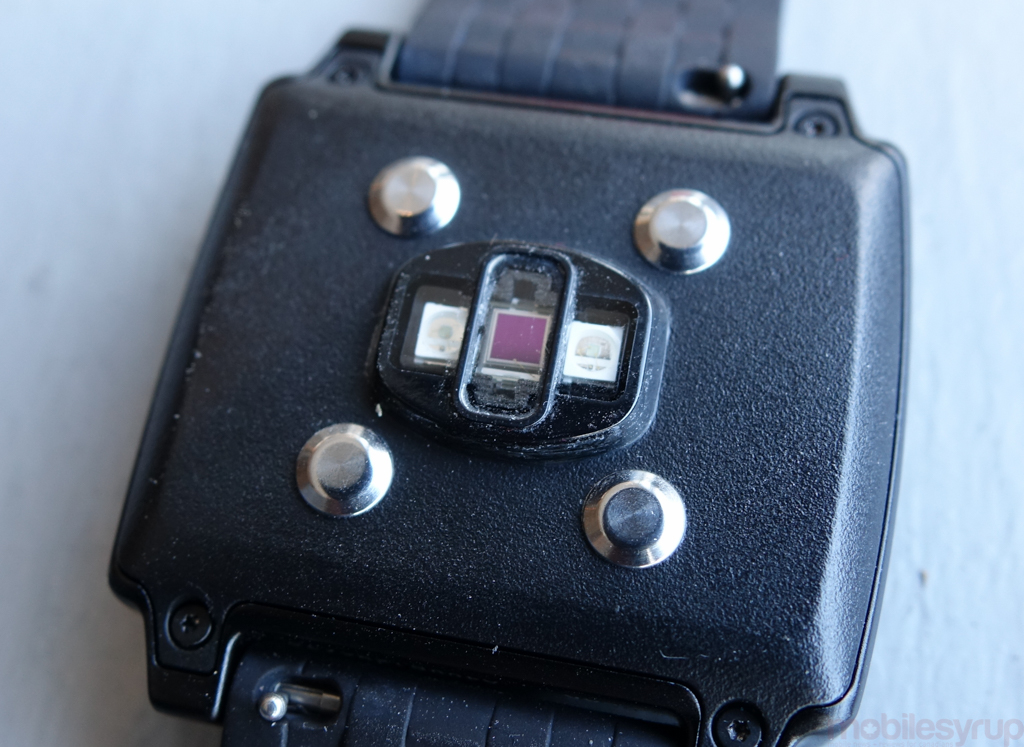 I was often confounded by the Basis Peak. It’s clear the hardware is robust, despite the exterior being a particularly matte shade of boring, but the company’s, um, basis, is in data, not fashion. To that end, the Peak provided more useful data than any wearable I’ve heretofore worn. The insights for running and sleeping alone are worth the price.

But the wearable, which costs $199.99 USD, is ridiculously marked up, even with the poor exchange rate: it costs $349.99 CAD at Future Shop and Best Buy. That price puts it above many of the competitors, and with the current buggy state of its software, beyond recommendation for all but the most hardcore athletes.