Fitbit Surge is a ‘superwatch’ priced at $249 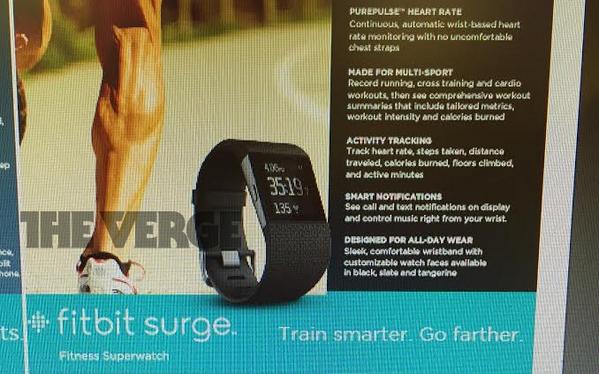 We got a glimpse of a brand new Fitbit just last week and it looks like the company has more where that came from. Following leaks regarding the Fitbit Charge and Charge HR, The Verge now has evidence of a device called the Fitbit Surge.

The Surge boasts the same PurePule heart rate monitoring and smartphone notifications that are built into the Charge HR. As we discovered last week, PurePulse tracks continuous, wrist-based heart rate readings. Designed for monitoring running, cross training and other cardio workouts, Surge is capable of tracking the aforementioned heart rate as well as time, distance, steps, calories, elevation, sleep, and even the number of floors climbed.

The screenshot above reveals Fitbit will be pitching the device as a watch you wear all the time, and The Verge reports that this device will be marketed as a ‘superwatch’ that is capable of tracking activity 24/7. This is probably how Fitbit will justify the rumoured $249.99 price tag, which goes beyond fitness band pricing and into smartwatch territory.

No word on when the Fitbit Surge will launch, but like last week’s Charge leak, the marketing materials seem all queued up and ready to go. We’re assuming Fitbit is targeting the holiday shopping season with these new devices. About time, too. It’s most recent device, the Fitbit Force, was announced about this time in 2013 and pulled earlier this year due to complaints of skin irritation.