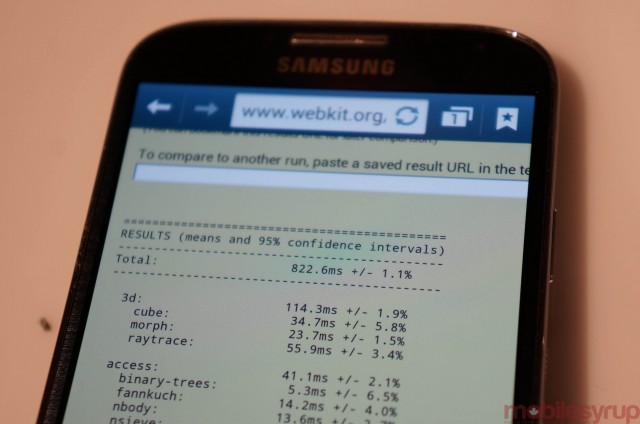 I had a chance to play with the U.S. variant of the Galaxy S4 last night, different to the international model in only major way: it will be powered by a quad-core Qualcomm Snapdragon 600 processor rather than octa-core Exynos 5 chip.

There are a few reasons for the decision, one that will irk many speed demons, but fact remains the North American Galaxy S4 will still be blazing fast. I ran the Sunspider Javascript benchmark on the device last night and came away impressed; the 822.6ms result was among the fastest I’ve seen on a mobile device.

It was likely possible for Samsung to have bundled its Exynos 5 chip with a North American-capable LTE baseband, but for reasons Samsung has yet to share the Qualcomm solution seemed a better fit. It likely has to do with Qualcomm’s proven power and thermal efficiency — its LTE chip is integrated into the Snapdragon system-on-a-chip — but could also be due to limited yields of the Exynos processor itself. While there will be a LTE-capable Exynos version of the GS4, it won’t support North American LTE bands.

Laptop Magazine also benchmarked the North American version of the GS4 and came away with AnTuTu Suite results some 30% better than the dual-core Galaxy S III.

So while it may be easy to decry the lack of an Exynos 5 chip inside our Galaxy S4, look forward not only to better battery life — the ARM Cortex-A15 chip is much less efficient than Qualcomm’s Krait architecture — but faster single-threaded results. The Snapdragon 600 in the GS4 is clocked at 1.9Ghz, 200Mhz faster per core than the HTC One and 300Mhz faster than the big.LITTLE in the Exynos.

Samsung is shutting down its Austin, Texas custom CPU team