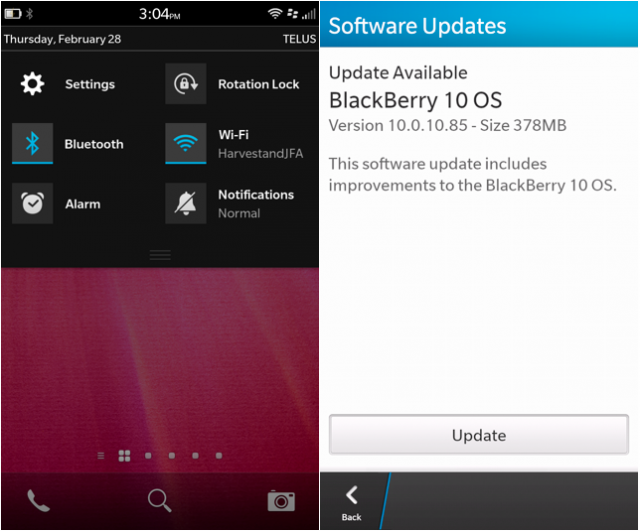 We’re hearing reports that Rogers and Fido BlackBerry Z10 owners are receiving their first OTA updates. This isn’t the previously-announced BlackBerry 10.1 update that is supposed to come to devices in March (though only TELUS has alluded to it) but it brings the software update to version 10.0.10.85. The update looks to be fairly small, only 378MB, so there are likely more carrier-specific changes and optimizations than a fully-fledged feature update.

If you’re running a Z10 on Rogers or Fido, head to Settings/Software Update and let us know how it works out for you!

Update: Seems that TELUS users are also being pushed the update now.
(Thanks Dale for the pics)

Update #2: BlackBerry just posted the top 5 improvements for the update:

1. 3rd Party App Performance
We’ve improved performance for 3rd party applications, so developers can build apps that run fast and smooth for you. With this update, you might want to keep an eye out for some fresh new app launches in March, like WhatsApp.

2. Phone, Calendar, and Contacts
Among the top improvements and features are fixes for Gmail calendars on BlackBerry 10. You’ll also find improvements in the BlackBerry Hub for logging calls log and how conversations are handled. We’ve also made general improvements to importing contacts from online sources.

3. Camera
We’ve optimized the camera for better photos in low-light situations. You’ll love the difference this makes for photos where you don’t use a flash – like the Time Shift Camera feature.

4. Browser and Media
With more and more of you using the gorgeous screen on the BlackBerry Z10 to consume online videos and media, we’ve made a number of improvements to the software in the way the browser handles video playback to provide a fantastic experience.

5. Battery Life
The software team has included a number of battery life optimizations with over 60 battery saving improvements since launch to keep you moving. These combined improvements are designed so that you see improvements in battery life and heavy users especially should see a longer average usage per charge cycle.