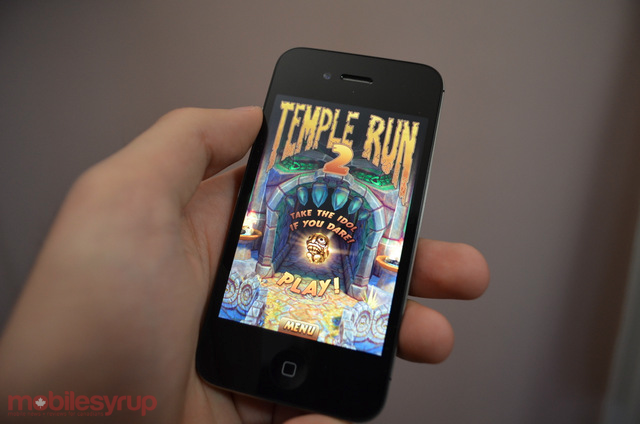 Temple Run is a game that has enjoyed high amounts of success on both iOS and Android. It spawned a number of imitators, but the main thing that keeps me coming back is the simple premise and the superb polish. It’s easy to pick up and play, and at the end of the day that’s what it’s built for: you play a round that lasts five minutes at most, then when the urge strikes you pick it up again. And again. And again.

It was also notable because, despite being a highly popular mobile game that was free, you could play it without submitting to microtransactions. This is becoming increasingly rare, as the truly free game is a bit of an endangered species.

That said, I think someone at Imangi Studios realized this, and thought it had to change. Temple Run 2 was released to the public the other day, and it’s a remarkably different product. The controls and premise are the same: you’ve stolen an evil idol and are running away from a demon monkey guardian who is constantly chasing you. Swipe and tilt your phone to avoid hazards. Bump into too many things, and the demon monkey eats you; fail to react in time to obstacles and you die. Rinse, repeat.

The original was a relatively simple game, easy to pick up and play. It was touted for its “one more time” gameplay, which is a hard thing to find; of course, developers want people to play their game as much as possible. Temple Run 2 looks to be a formidable follow-up, but there are issues that kept me from enjoying it as much.

Though the game’s visuals have undergone a massive upgrade, it’s not for the better. Part of the what made the first game great in that it was easy to navigate and easy to control: the difficulty came from it speeding up over time, or giving you tough combinations of obstacles. In Temple Run 2, a lot of deaths will come from not knowing what actions will register in successes or failures, and that just screams “bad design”. 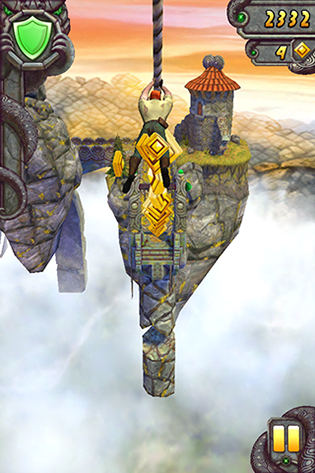 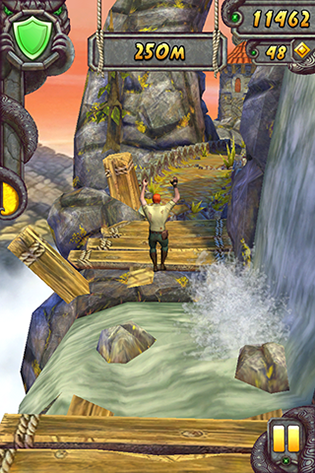 For instance, the game’s playing field has ceased being one flat expanse, which forces the camera to bob and weave around behind the player. While this is fine as a visual upgrade (because who likes running in straight lines, right?) it can make discerning what is actually coming at you very difficult. Too many times my character went over a hill, only to crash into something on the way down because I couldn’t see what was coming up.

This also applies to certain gaps that look jumpable but really weren’t; it comes off as vindictive, as if the game was making a face at you saying, “bet you didn’t see that one coming, did you?” It feels that some situations cease being about the player doing the correct action and more about whether the game will register you doing it, which is a big problem. The game’s mine cart sections are particularly bad for this, as leaning to one side to avoid broken track can be very hit-or-miss.

When you die, you’ll be prodded every time to buy back into the game with gems. Gems are a premium currency and can be collected in-game, albeit rarely. The costs increase as you buy back, so you’re tempted to spend in order to keep a good run going. The ever-nagging feeling that you should spend real money makes it seem like Imangi became wise to the fact that there was untapped potential to squeeze the impatient.

Ultimately, Temple Run 2 brings new concepts to a good format. It adds things that hinder the great experience that the first game had  and almost exploits the fact that they know people will pick it up regardless. There’s a new coat of paint slapped on, sure, but it feels less concentrated on playing well and more concerned with getting you to spend money.

If you’re someone who’s ever looked at a copy of Bejeweled 2 and wondered “what’s the point?” you’ll likely get the same feeling here. If you’re bored of Temple Run and are desperate for something new, then check out Temple Run 2 — it’s free.