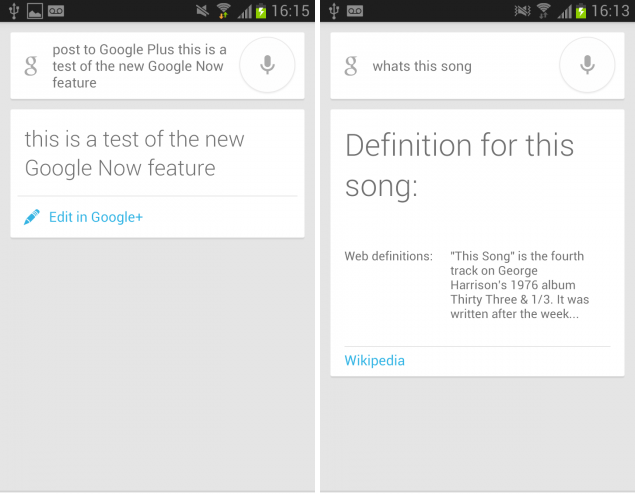 Google has updated its Search app for Android, adding more Cards to Google Now. Focusing on holiday travel, Google Now is able to show you events in your area, tell you the weather at your destination and, in some cases, automatically show your boarding pass as you enter the airport terminal.

This comes after Google updated its Search app in October to discover context-specific items among your emails. Google is able to tell you when a package has been shipped or if a flight is delayed, based on data gleaned from Gmail, though the features are optional. Google also previously added translation and currency exchange into its Now service.

Google Now can now plug into Goggles and Google+, allowing users to scan barcodes and post to the social network with their voice. The company has also supposedly turned on a music match feature, but when I attempted to discover the track playing on my stereo using the command Google provides, it didn’t quite work (as you can see above). It’s possible that the music match feature, which is like SoundHound or Shazam, is U.S.-only, but that isn’t specific in the release notes.

The update is for Android 4.1+ devices, which limits its to around 6% of the ecosystem, but that number is quickly growing, especially since the world’s most popular Android phone just received the functionality.

HTC Canada says upgrade to Android 4.4 KitKat coming to the One and One Mini

Google begins warning users when its search results might be unreliable