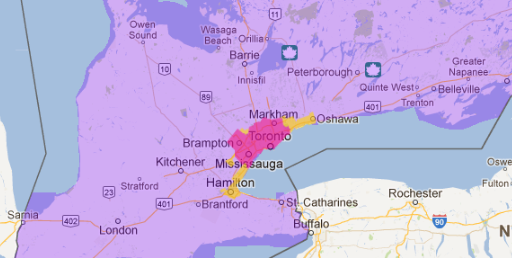 In 2013 Mobilicity will be continue to expand their 4G HSPA+ Canadian coverage. In a press release today they announced a plethora of chosen locations, specifically that Pickering, Ajax, Whitby & Oshawa will be live by September, then Oakville, Burlington & Hamilton/Stoney Creek by December.

Stewart Lyons, Mobilicity’s President and COO, stated “To the hardworking people living in Oshawa, Hamilton and everywhere in between, we want to let you know that your days of being overcharged for wireless are numbered. Mobilicity is on its way. Our engineering team has been working on network builds in your areas and we’re looking for new dealers and employees.”

Back in June Mobilicity originally announced that “future plans” were to expand into Oakville, Burlington, Hamilton, Pickering, Ajax, Whitby and Oshawa, guess they meant September.