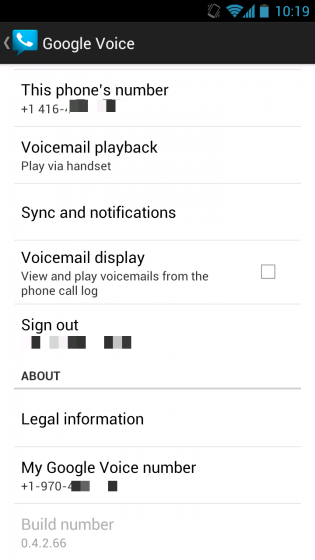 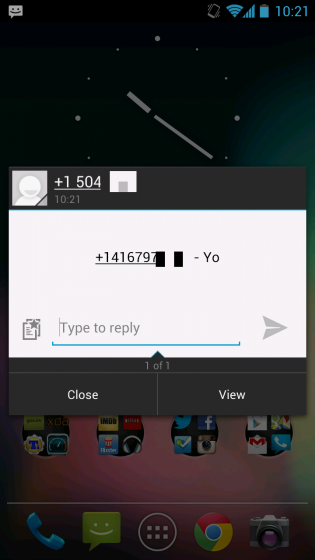 For many Canadians, the one Google service coveted above all others is Google Voice. The ability to have a single, centralized number forward to as many phones as you like, with the option to replace your carrier’s voicemail service with Google’s own (occasionally inaccurate) transcription service is incredibly convenient. Not to mention the fact that, in the States, you can port your number over to Google and make all your calls using the company’s low rates.

We’ve received a few tips that Google Voice can now be used to forward existing U.S.-based numbers to Canadian cellphones; in the past, this would have been impossible. And while it’s not yet possible to make outgoing calls using Google Voice from our Canadian phone — it results in a “Could not complete your call, please try again,” prompt — calls made to our Google Voice number are being correctly routed to our local number.

Similarly, text messages sent to our Google Voice number were correctly forwarded to our Canadian phone, which means that you can begin giving out your GV number to friends in the States without having an international text plan. Texts came through both in the Google Voice app and as a regular SMS, though it was routed through a U.S. distribution centre; replying in the Messages app would be an international text, but doing so from within the GV app hits a local 416 number.

It all sounds confusing, likely because the service itself isn’t fully operational, but at least you can perform some Google Voice functions you previously couldn’t. Voicemail hasn’t yet been set up for Canadian carriers, and possibly never will, but you can have friends and family leave messages on your GV number without incurring long-distance charges by calling your Gmail address from inside the browser.

You’ll still need to circumvent regional restrictions imposed on Canadian IP addresses to access Google Voice for the first time. You also need an active U.S. number to activate the service for the first time. Once you’ve set it up — either by rerouting your IP using a VPN, or by going to the States and connecting to the service over WiFi or a prepaid SIM card with data — you’re good to go.

Another indication that a Canadian Google Voice launch may be imminent is that the Android app is no longer restricted to download; while it’s not yet searchable on Google Play, you can download it from a direct link.

Update: OK, looks like there are quite a few caveats here.

First, to be able to install the Google Voice app on Android, your account has to have at least one phone with a U.S.-based number. Because I have a T-Mobile SIM registered to my Google account, I was able to force Google to push the GV app to my Rogers phone. Not sure how that works, but it does. If you can’t manage to get it to install, you’ll need to sideload it, which is available by searching for the .APK file on Google.

One of our readers claimed that Google, over the past few weeks, has been allowing some Canadians to purchase a new number on an existing account with a valid Canadian area code. This has since been turned off (and we can’t verify it was ever possible, but we’ll give him the benefit of the doubt) but it may indicate that Google is testing the service officially in our fair land.

It also looks like Google is slowly bringing in Canadian routing numbers, which is why outgoing calls on Android phones were working for some and not others. I was able to successfully make an outgoing local call this morning using GV on my Galaxy S III, and it routed through a 647- number. Yesterday, when I tried to do the same, it gave me the error above.

More information can be found in this (long) HowardForums thread.

Something is happening here, and it’s exciting. Stay tuned for more information.