Samsung seems to be on a roll with their flagship Galaxy devices. Earlier today they announced that the Note II passed over the 3 million in sales. Now, according to a post on Facebook, plus a picture of proof, the Samsung Galaxy S III has surpassed 30 million in sales.

“We have already sold 30 000 000 Samsung Galaxy S III in the world! You already had a chance to test its features?”

The GSIII launched in Canada on June 27th and only took two months to hit the 10 million mark, then in September Samsung declared sales of 20 million. Now, six weeks later they’ve dramatically increased sales by 10 million, possibly a side benefit to the Apple/Samsung lawsuit. 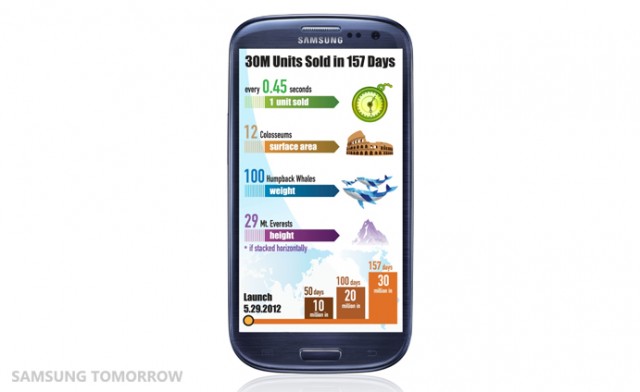 Update: Samsung has confirmed the news of 30 million GS III devices sold, plus have given a few more interesting stats. According to a post on their company blog they note that they reached the 30 million mark in 150 days – “approximately five months since its debut in May.” This converts to one Galaxy S III sold every 45 seconds, enough to fit the surface area of “12 colosseums.” In addition, 30 million GS III’s weigh 100 humpback wales, and is the hight – stacked horizontally – of 29 Mt. Everests.