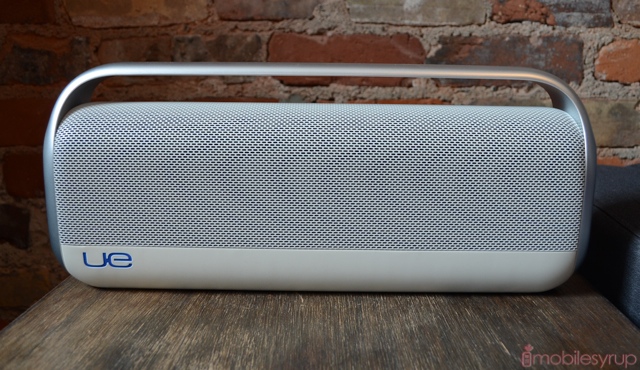 Before the Logitch UE Boombox, I didn’t have much experience with the portable Bluetooth speaker market. I had heard of some of the major players in the market like Jawbone’s Jambox, and I already owned (and loved) the SuperTooth Disco speaker.

When Logitech purchased high-end audiophile brand Ultimate Ears in 2008, it sat on it for a while. The company was known for creating extremely high-fidelity in-ear headphones. Recently, the company brought out a number of UE-branded products, including the $399 AirPlay-enabled Logitech UE Air Speaker and, at the entry level, the $119 UE Mobile Boombox.

The UE Boombox sits in the middle of those two, retailing for $279.99 CDN. Its austere, modern design is striking. Indeed, looking at it straight-on reminds me of an old transistor radio with updated touches. I am a huge fan of minimalism, and aside from the small logo on the front left, there is nothing that resembles branding to take away from the experience. 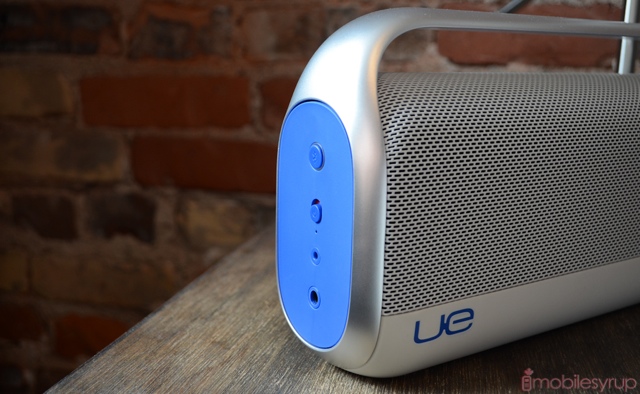 Then there is the unmistakeable “boombox” handle, made from a continuous piece solid aluminum that stretches from one side of the speaker to the other. The handle feels very sturdy and enables a portability that wouldn’t otherwise be possible from a speaker of this size. IT 4.4lbs (1.9kg) and 15.2″ x 3.1″ x 6.5″, it’s not a small speaker, and stretches the definition of portable. While it’s easy enough to fit inside backpack, it’s better suited to a backyard barbecue than a camping trip.

Both sides of the speaker are covered with a blue rubber that looks great and fits in with the overall finish quite well. In addition to a Bluetooth pairing button, there’s a power button, a line-in jack and a AC input. The Boombox can work off batteries, and claims six hours of life when on the go, though under normal circumstances I achieved three to four hours. 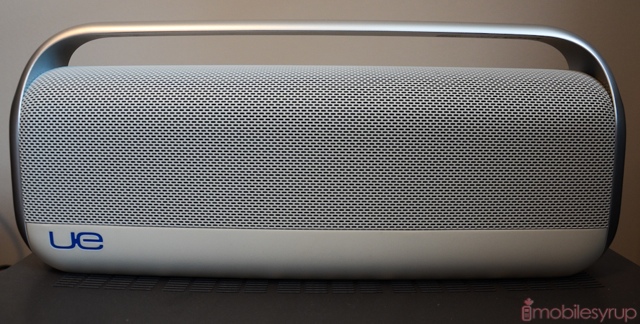 More important than how it looks, however, is how it sounds. The UE Boombox has massive sound, some of the best I’ve heard from a portable speaker. Behind the grills are two woofers for mids and bass, two tweeters  for treble, and four passive radiators. After pairing your smartphone with the speaker, which is done by turning it on, pressing the big blue button on the left hand side and “discovering” it on your smartphone, any music played from your portable device will come out of the speaker. While the Bluetooth A2DP profile transcodes the song into a relatively low-bitrate 128kbps stream, I had no issues hearing the nuances from my favourite jazz albums, nor enjoying a great Led Zeppelin guitar solo.

Logitech has tuned the speaker for lovers of bass, however, and that’s to honour the “boom” in its name. The Boombox can easily fill a fairly large room with sound, and I even took it to a school gym to test whether it had enough power to fill a boot camp session (it did, but barely). 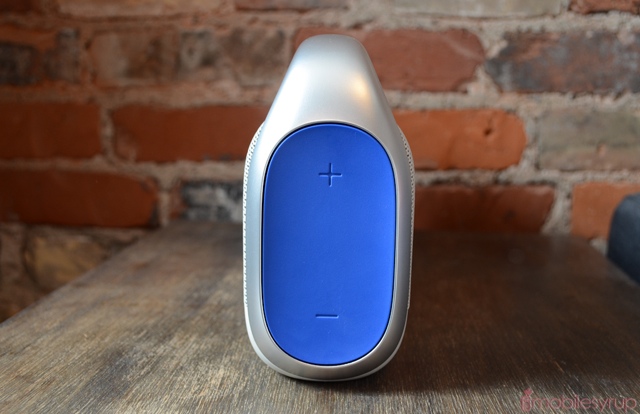 When on batteries, the sound is noticeably softer and less precise — muddled, in fact. While it had no problem filling a small room on battery power, I’d recommend trying to find a plug in a party setting. If you want to increase sound quality even more, forego the Bluetooth connection and plug your phone or MP3 player directly into the speaker using a stereo cable. Unfortunately Logitech doesn’t include said cable, but it can be purchased from a dollar store for a couple of bucks.

At $279 it is $20 cheaper than the smaller, less powerful Big Jambox, making it an excellent purchase for those looking to fill a room with bass-heavy but enjoyable sound. And while that number may seem high, it’s very difficult to find a decent-sounding, well-made portable speaker for cheaper. If you’re looking for an AirPlay speaker, which works with iOS devices only but allows for much higher-bitrate music over wireless, you’re looking at $300 minimum. While the UE Boombox is limited somewhat by its A2DP profile, it sounds fantastic, and gets a huge recommendation from us.

The Logitech UE Boombox is available for $279.99 from Logitech.