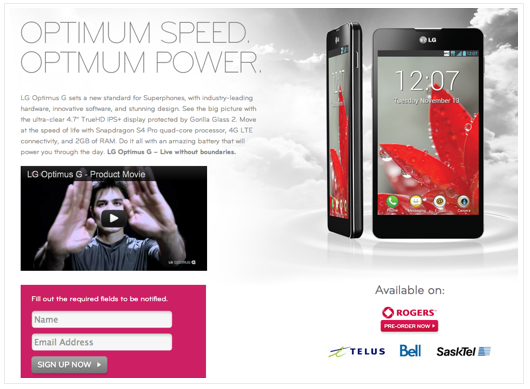 The LG Optimus G is coming to Canada “early November” and will be packing a 1.5GHz quad-core processor. In their press release they noted the carriers will be Bell, Rogers and TELUS. Rogers has already started to take pre-orders for the Android – even priced it at $129.99 on a 3-year and $599.99 on a month-to-month.

According to the LG Canada dedicated Optimus G site there’s another carrier getting in on the flagship device – regional carrier SaskTel. No word on timing or pricing, but SaskTel has been doing a great job releasing devices within a week of the Big 3.

Check out our hands-on of the Optimus G here.
Source: LG Canada