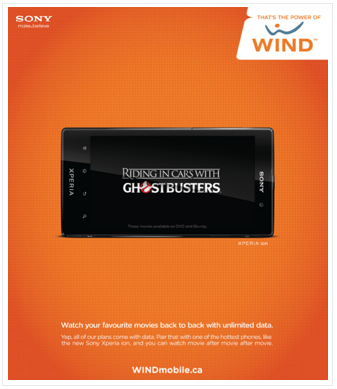 The Sony Xperia ion was recently released by Rogers, but it seems their short exclusivity is about to end. In Sony’s July press release they noted that the Android will “be available through various Canadian wireless carriers.” Well, according to this ad in a Cineplex Magazine it looks like WIND Mobile will be one of the lucky ones to bring this to their customers. No word on a release date or pricing. The ad highlights how customers can take advantage of watching “movie after movie after movie” with their unlimited data plans.