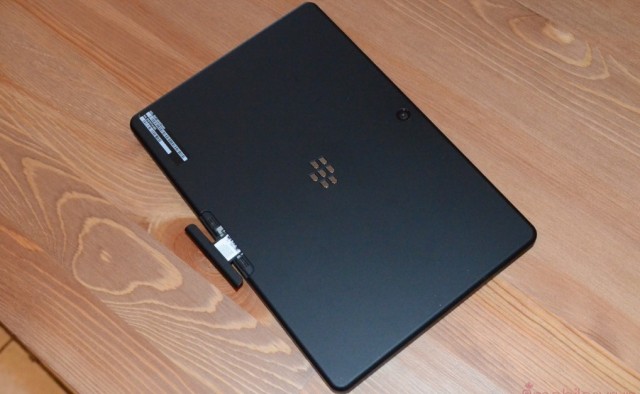 The 4G LTE BlackBerry PlayBook is here, and it’s eerily familiar. What was once heralded as RIM’s great comeback product has been, a year later, morphed into a standard-issue 7-inch tablet with its own advantages and quirks.

Since the launch of PlayBook OS 2.0 in February, we wondered when we would see the inevitable 4G LTE version, and now Rogers, Bell and TELUS are launching the souped-up variant for $349.95 on a 3-year term and $549.95 outright. While these numbers may seem high, you’re getting a 1.5Ghz dual-core processor, 32GB internal storage and 4G LTE support, all with the same excellent 7-inch 1024×600 pixel screen, 5MP back camera and 3MP front camera. In a word, you’re getting an improved version of the same. But is that enough in the world of Retina Displays, Samsung’s Galaxy Tab 8.9 LTE, or even the Google Nexus 7? 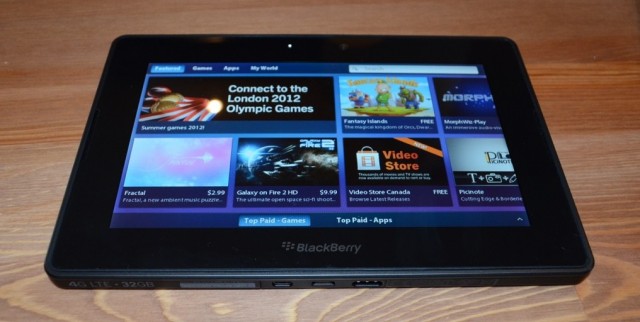 Mainly what’s new here is the software, which has been significantly updated over its initial version. For an overview of PlayBook OS 2.0, check out our feature, but what you need to know is that everything (OK, most things) that were not present in April 2011 are alive and well now. That includes a dedicated email client, an excellent calendar which ties into your social networks, a fantastic keyboard with SwiftKey-powered autocorrect, and a number of big-name apps and games from companies that, a year ago, were seen to have shunned RIM entirely.

At its core, you’re getting the same PlayBook experience here. What’s different is the ability to take it on the go with you and have access to LTE speeds of up to 75Mbps across multiple networks — Rogers, TELUS and Bell — without having to rely on WiFi signals or messy phone tethering. Unfortunately you cannot reverse-bridge your BlackBerry to the PlayBook as there is no WiFi Hotspot feature on the tablet itself, but you can still pair your device with the PlayBook to access your phone’s messages, contacts, calendar, BBM and more. 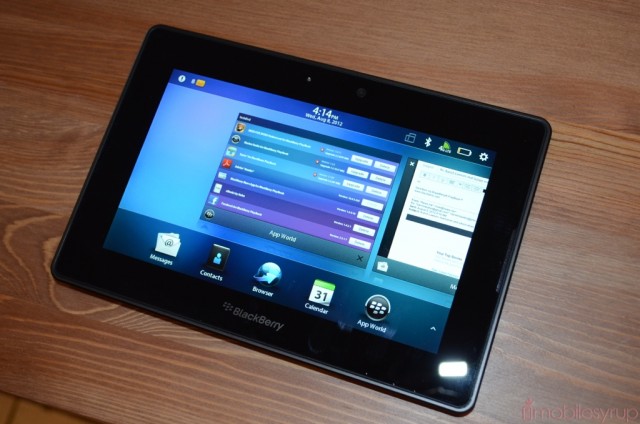 The other thing that RIM improved upon here is the power button; it now sticks out a couple millimetres from the edge, allowing you to easily turn on and off the device without digging your nail frustratingly into the bezel. You’ve always been able to turn on the device by sweeping your finger up from the bottom bezel, but the power button was a sore spot on an otherwise-excellent piece of hardware.

On the bottom of the PlayBook are the requisite micro HDMI, microUSB and dock connectors, allowing you to connect the tablet to your television without too much trouble. Considering RIM has recently brought its Rovi-powered Video Store to Canada, the feature may get some extra use.

With the boosted 1.5Ghz dual-core processor (which still isn’t as fast as current smartphones — it’s the same chip that’s inside the Samsung Galaxy Nexus but clocked 300Mhz higher) and LTE speeds, I noticed the PlayBook felt signfiicantly faster than its predecessor. That being said, though it can decode 1080p streams and capture HD video, the tablet does not compare to the new iPad or the latest Tegra 3-powered Android devices in terms of sheer speed. The interface is fast, fluid and a pleasure to use but even the browser, which has been heavily optimized for the platform, feels sluggish at times. 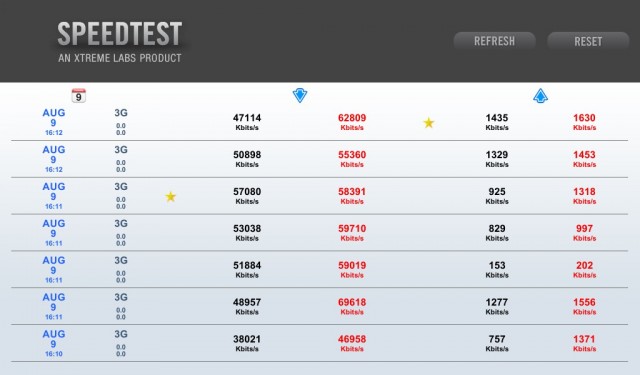 One bright spot, obviously, amongst the new features, is the ability to hit upwards of 50Mbps and above in LTE speed tests. The PlayBook managed to do just that, consistently, when testing network speeds over the the Rogers network. We noticed that the Xtreme Labs-built Speedtest app did not respond as we wanted it to during the upload tests, it’s likely because it has not been tuned correctly, rather than any fault of the network itself. We consistently obtained speeds of higher than 40Mbps in downtown Toronto, something that was unthinkable nearly a year ago. 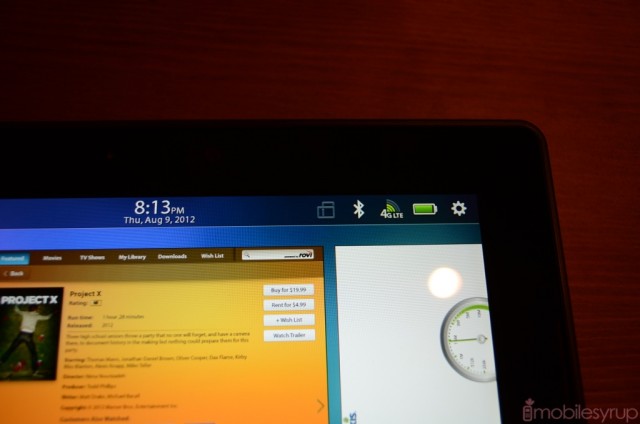 That 4G LTE indicator shines back at you whenever you return to the home screen, an indication that the PlayBook is ready to work and move with you as you go about your day. We observed tremendously high speeds when testing the device, and we’re confident that results would have been the same had we tested it on Bell or TELUS. 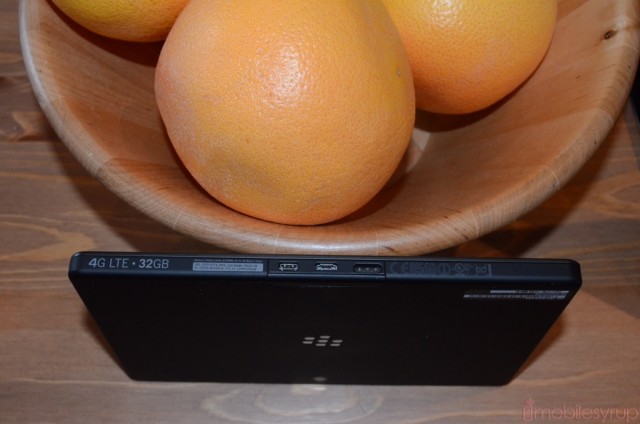 The 4G LTE PlayBook may not be the device of the year, nor the deal of the month, but many BlackBerry-oriented businesses are going to be head over heels in love with the combination of portability, speed and security that the tablet provides. It may seem vexing to us why RIM is launching the tablet now, or at all, but there is a market for carrier-sold, network-powered tablets and the company is trying to cut off a piece of that pie.