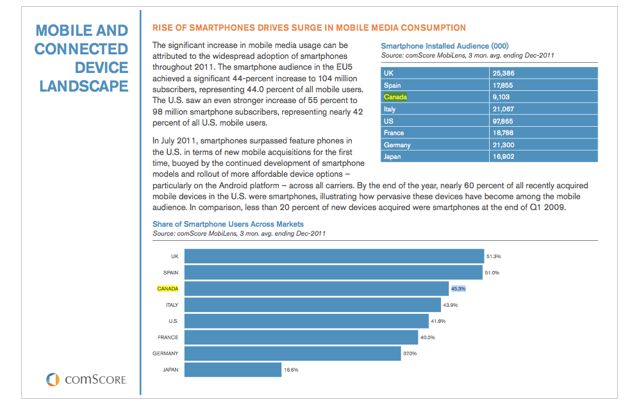 According to the latest comScore report, Smartphone adoption in Canada is increasing. Certainly nothing new there, but the 2012 Mobile Future in Focus/MobiLens report states that at the end of December 2011 there was 9,103,000 smartphone users in Canada, representing 45.3% of the carriers subscriber base.

This percentage that comScore quotes comes close to what the carriers Q4 announcements over the past couple weeks. Smartphones make up for 56% of Rogers postpaid subscribers, their total subscriber base is 9,335,000. Bell subscriber base jumped to 7,427,482, and smartphone make up 48% of their subs. TELUS has been steadily increasing their subscriber numbers, now at 7,340,000 with  smartphones representing 53%. There’s no word on the number of smartphone the other carriers have, such as WIND, Mobilicity, Public, MTS, Sasktel or Videotron. However, WIND Mobile has 425,000 subscribers, Mobilicity is potentially sitting around 300,000 subs, Public Mobile has racked up 199,000 subscribers, and MTS now has over 496,432 subscribers. So it certainly seems that the number of wireless subscriber in Canada is close to 27 million.

Another interesting point in the report is that Samsung has a 24.3% wireless market share in Canada, followed by LG with 18.8% market share, then RIM with 14.8%. However, shifting to the growing smartphone arena, RIM is still king in Canada with 32.6% – but this is a massive drop from 42% in June and 35.8% in November. Apple’s iPhone is in a very close second place with 31.2% (only 1.5% away from leading the group), followed by Samsung with 11%.

comScore noted in the report that “While RIM currently maintains the top position in Canada, the market dynamics are shifting and its hold is tenuous at best. Apple looks poised to assume the top position during the first few months of the year, though Android could surprise and get there first. Over the past six months, RIM has lost 6 percentage points of market share with most of it going to Android.” 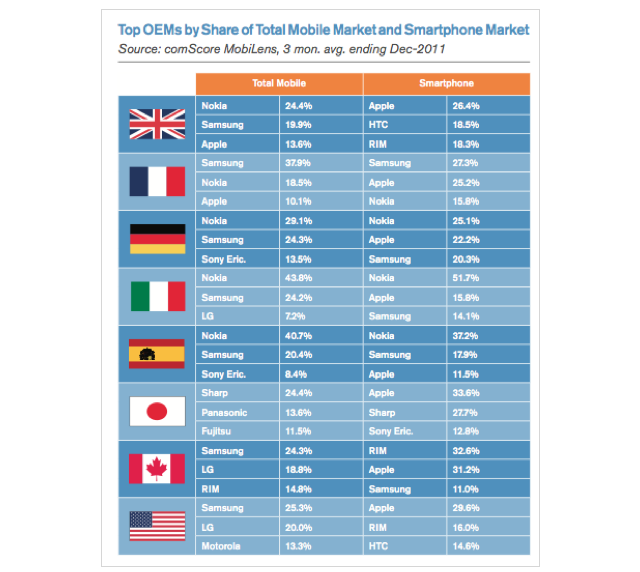