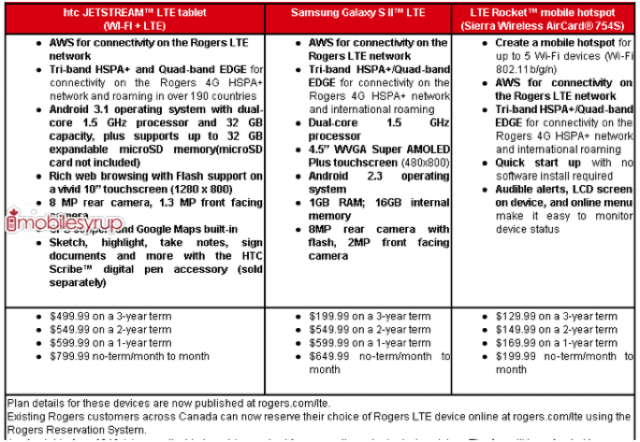 The Rogers LTE network is now live across Canada, well only in select coverage in Toronto, Ottawa, Montreal and Vancouver. The only LTE device currently available is the Sierra Wireless AirCard 313U, but that’s changing October 18th when the HTC Jetsream will be launched – an Android 3.1 tablet. Rogers will also be releasing the LTE-enabled Sierra Wireless AirCard 754S mobile hotspot and the Samsung Galaxy S II “in the coming weeks”. Also coming down the Rogers LTE pipe is an HTC smartphone and possibly the Samsung Galaxy Tab 8.9.

The 3-year and no-contract prices were already revealed this morning for the Jetstream, Galaxy S II and the AirCard 754S. Just in case those terms are not for you, one of our reliable Rogers tipsters has given us the complete prices for each of these upcoming LTE devices. Here they are… leave your thoughts below.