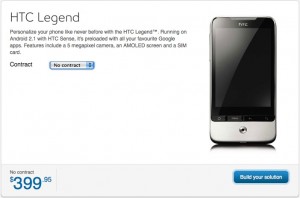 Right on schedule from what we said a few weeks ago, Bell has released the Android-powered HTC Legend today.

There’s something odd about this release though. First it was a bit bizarre that Virgin Mobile released the OS 2.1 device before parent-company Bell. The Virgin price plans are really impressive: $79.99 on a 3-year and $349.99 no-contract. But this is where it gets a bit strange again. Bell has the same 3-year price plan at $79.95 but the no-contract price is $50 more than Virgin at $399.95.

Regarding the actual device… we’ve put it through a drop test and a couple reviews and it’s a solid device. Specs of the Legend are that it comes with HTC Sense, 3.2-inch display, 5 megapixel camera with auto-focus, flash and video capabilities, 3.5 mm audio jack, Wi-Fi, music player, FM radio, and can hold up to 32GB with a microSD card.

Check it out here at Bell
Here are a few video reviews of the Legend:

HTC to lower smartphone output in 2012, focus on “hero” devices

BlackBerry PlayBook 16GB drops to a low $49.99 outright at SaskTel