Report: Telecom in 2010 “will remain oligopolistic for at least the next several years” 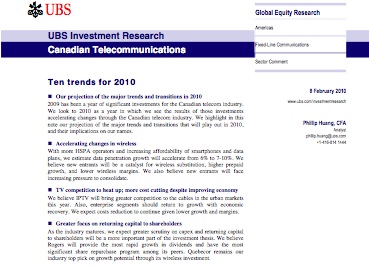 UBS Investment Research released a report based on Canadian Telecommunications today titled “Ten trends for 2010”. It’s pretty in-depth and gives a good insight into what we could possibly expect to see and what not to see. (There is a top 10 list below).

Phillip Huang put the report together and he says that “Quebecor (Videotron) remains our Industry Top Pick” and beleives the “market currently underestimates the value of the company’s wireless investment”. Videotron is targeting the Summer of 2010 to launch theit HSPA network. It’s interesting to see another analyst report on the top 10 trends and forecasting Rogers, Bell and TELUS still competing against each other with little or no impact from the new carriers.

In the report Huang stated “In 2010, we expect all three incumbent players (Rogers, BCE, and Telus) to have wireless plans and marketing aimed at wireline replacement. We believe all three incumbents will have wireless plans and marketing”…”We expect Bell and Telus to drive harder on smartphone penetration in 2010, and regain some share of wireless data growth. However, we expect competition on wireless data to remain relatively rational between the three incumbent players encouraged by their common need to offset declining voice revenues. Although we believe new entrants will help accelerate the commoditization of voice services in Canada, we currently do not believe they will be a significant driver of competition in data services because of their narrower handset line-up, smaller coverage, less mature networks, and slower connection speeds. We believe the market structure for wireless data will remain oligopolistic for at least the next several years.”

Here are the top trends:

1. Canadian market is ripe for wireless substitution – the percentage of wireless-only household in Canada has remained low at ~8% (vs. ~20% in the US) mainly due to relatively expensive big-bucket minute plans and the lack of unlimited voice plans. This is rapidly changing, and we expect wireless substitution to accelerate in 2010. We believe BCE has the greatest exposure to this risk because it has the most residential lines.

2. Acceleration in wireless data penetration – with more HSPA operators, faster data connection speeds, more affordable data plans, and growing selections of 3G handsets/devices at increasingly competitive prices, we estimate data penetration growth for the industry will accelerate from 6% to 7-10% this year. However, we do not believe new entrants will be a significant driver of competition in wireless data in 2010 because of their narrower handset offerings, smaller coverage, less mature networks, and slower connection speeds.

3. Increasing prominence for prepaid service – we believe the entry of new wireless players will be a catalyst for the emergence of more attractive prepaid plans that offer big bucket minutes at affordable prices. We believe this will drive higher prepaid subscriber and ARPU growth, and prepaid services will increase in importance for the incumbents.

4. Declining wireless margins – as the wireless industry matures and growth shifts from postpaid to prepaid services, we project margins will decline. In 2010, we estimate wireless margins will contract for all three incumbents (Rogers, Telus, BCE) mainly driven by their focus on smartphone penetration, higher acquisition and retention costs, and the growing mix of lower ARPU subscribers.

5. New entrants face pressure to consolidate – in order to compete with the three well-capitalized incumbents, we believe the new entrants must be prepared to sustain operating losses for an extended period of time. We believe the growing need for funding may drive consolidation among the new entrants sooner than expected. We continue to believe Shaw would have the most interest and financial flexibility to acquire spectrum from other new entrants if the opportunity arises.

6. TV competition ramping up – we expect Bell and Telus to shift greater focus towards their VDSL/ADSL2+ footprint expansion and IPTV product in 2010, bringing greater competition to the cable companies in the urban markets. Relative to Shaw, we believe Rogers and Quebecor are in better positions given Bell’s smaller competitive IPTV footprint in their markets.

7. Enterprise to recover in 2010 – we project enterprise activities will resume to a more normalized level and return to growth in 2010 as the economy recovers.

8. Cost reductions to continue – with overall growth slowing and margins contracting given increasing competition in the industry, we believe cost cutting initiatives will continue in 2010. We see expanding wireline margins for Bell and Telus, and moderately expanding cable margins for Rogers.

10. Greater focus on returning capital – as growth for the industry continues to slow, we believe there will be greater scrutiny on the industry’s capital spending and the amount of capital returned to shareholders will become an increasingly important part of Canadian telecom stocks’ investment theses. We believe Rogers will provide the most rapid growth in dividends and have the most significant share repurchase program among its peers over the next several years.