Splatoon 3 is a lot like its predecessor, but that’s okay 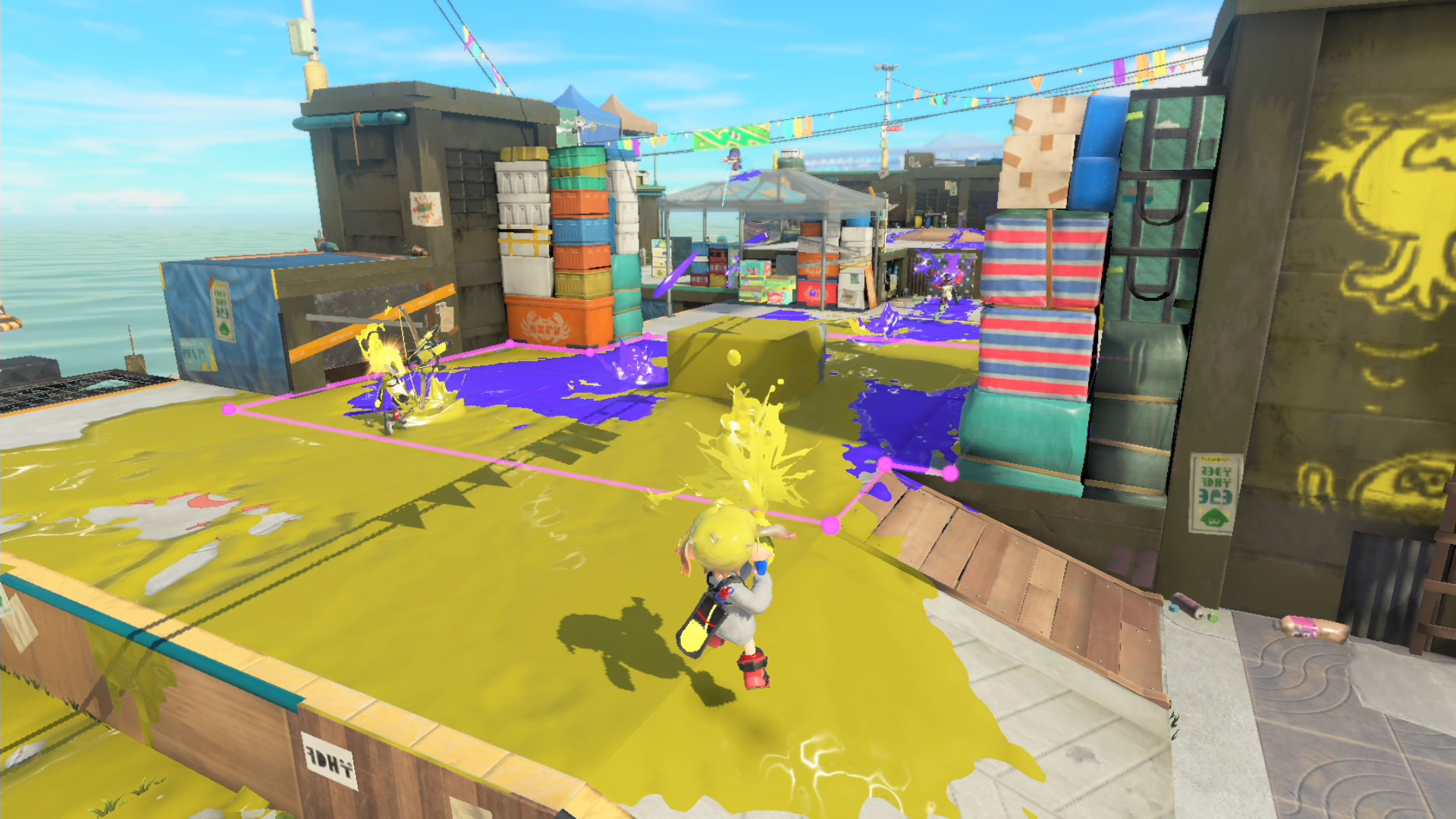 Why change a formula that wasn’t broken to begin with?

This is the crucial fact to note about Splatoon 3, Nintendo’s very familiar sequel to Splatoon 2. While the inventive third-person shooter is a clear step above 2017’s entry in the series and 2015’s Splatoon on the Wii U, it’s also not that different. You’re still a squid kid, and your ultimate goal remains splatting brightly coloured ink across the map.

First, let’s take a look at Splatoon 3‘s single-player mode, a feature I was equally impressed and disappointed with. My dream of an open-world Splatoon based on early teasers was quickly dashed as I realized the title’s campaign is very similar to Splatoon’s and Splatoon 2’s. There’s a gated overworld where you progressively unlock new areas by removing the ooze covering the map, alongside the familiar, traditional level structure and upgrade system I’ve come to expect from the series.

Without giving anything away, there’s a substantial story focused on the world Alterna, but if the series’ narrative hasn’t clicked with you in the past, don’t expect Splatoon 3 to change that. Still, it’s compellingly weird, and its new characters are memorable. This time around, boss battles feel more inventive (and difficult) than the big baddie foes in Splatoon and Splatoon 2. You also get access to a new “Smallfry” fish-like companion that helps you ink hard-to-reach areas on the map and take out certain enemies. While a welcome twist on Splatoon 3‘s core gameplay, the new Smallfry doesn’t do much to shake up the series’ formula. 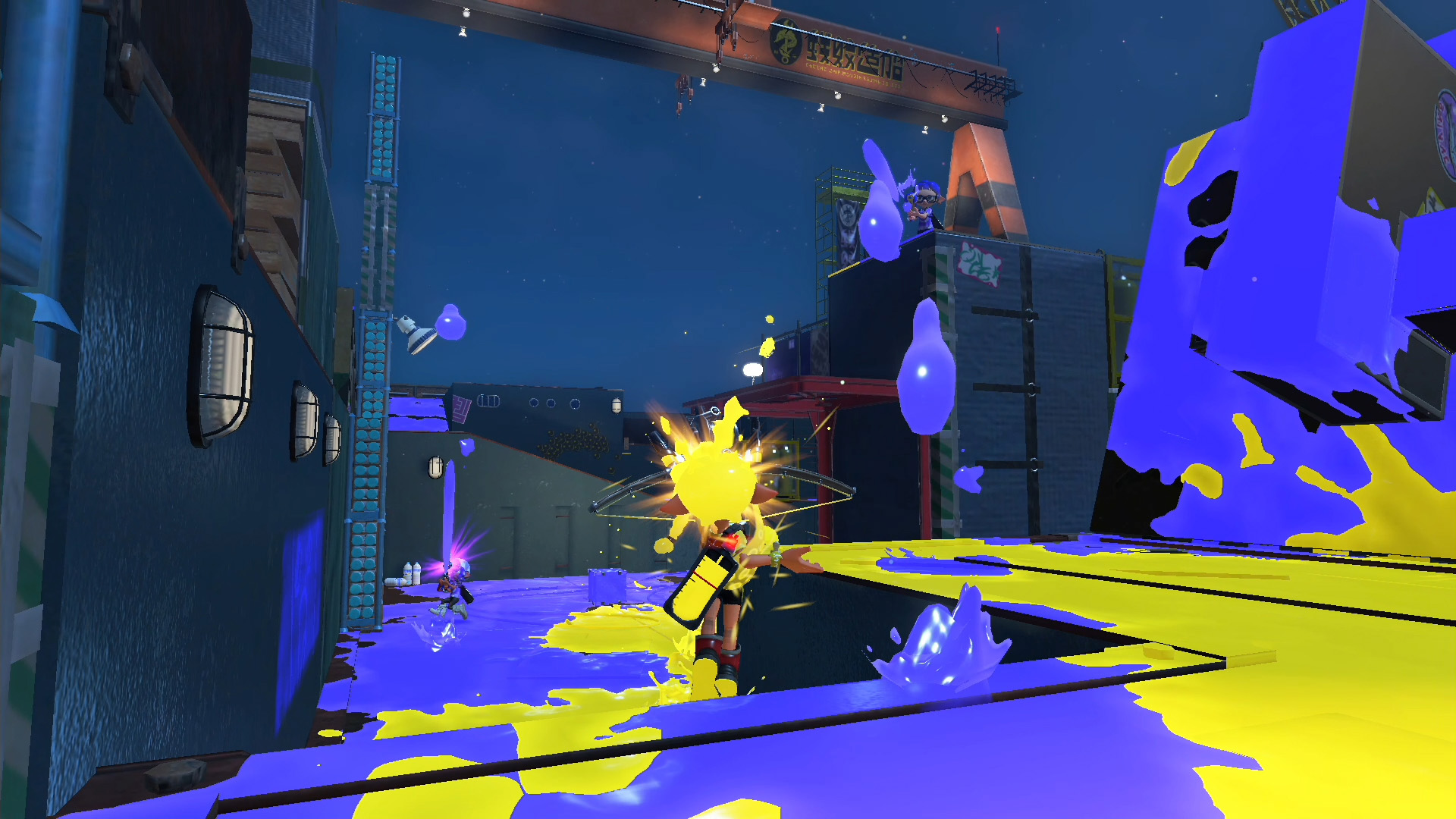 For better or worse, there are also several features borrowed from Splatoon 2‘s substantial Octo Expansion, like taking levels on with less powerful weapons for higher rewards. Speaking of level goals, I found Splatoon 3‘s tasks to be more varied and challenging than what I’ve encountered in past Splatoon titles. There’s genuinely genius-level design in Splatoon 3, and I even managed to find myself stuck on several stages, only to encounter the coveted “ah ha!” moment after a dozen or so minutes of experimentation (usually, this involved falling through a grate I didn’t initially notice).

It’s worth noting single-player mode still works as a great intro to Splatoon 3‘s core mechanics, including getting the hang of new weapons like the extremely fun ‘Splatana,’ an ink-covered katana that flails paint around and the ‘Tri-Stringer,’ a timed weapon that shoots out three projectiles (echoing what Brad Shankar said in his hands-on, the Tri-Stringer will likely become my favourite multiplayer weapon). Overall, Splatoon 3‘s single-player is lengthier and more substantial than what’s been offered in past entries in the series, but it still feels like an elaborate training exercise designed to prepare you for the game’s main multiplayer attraction. 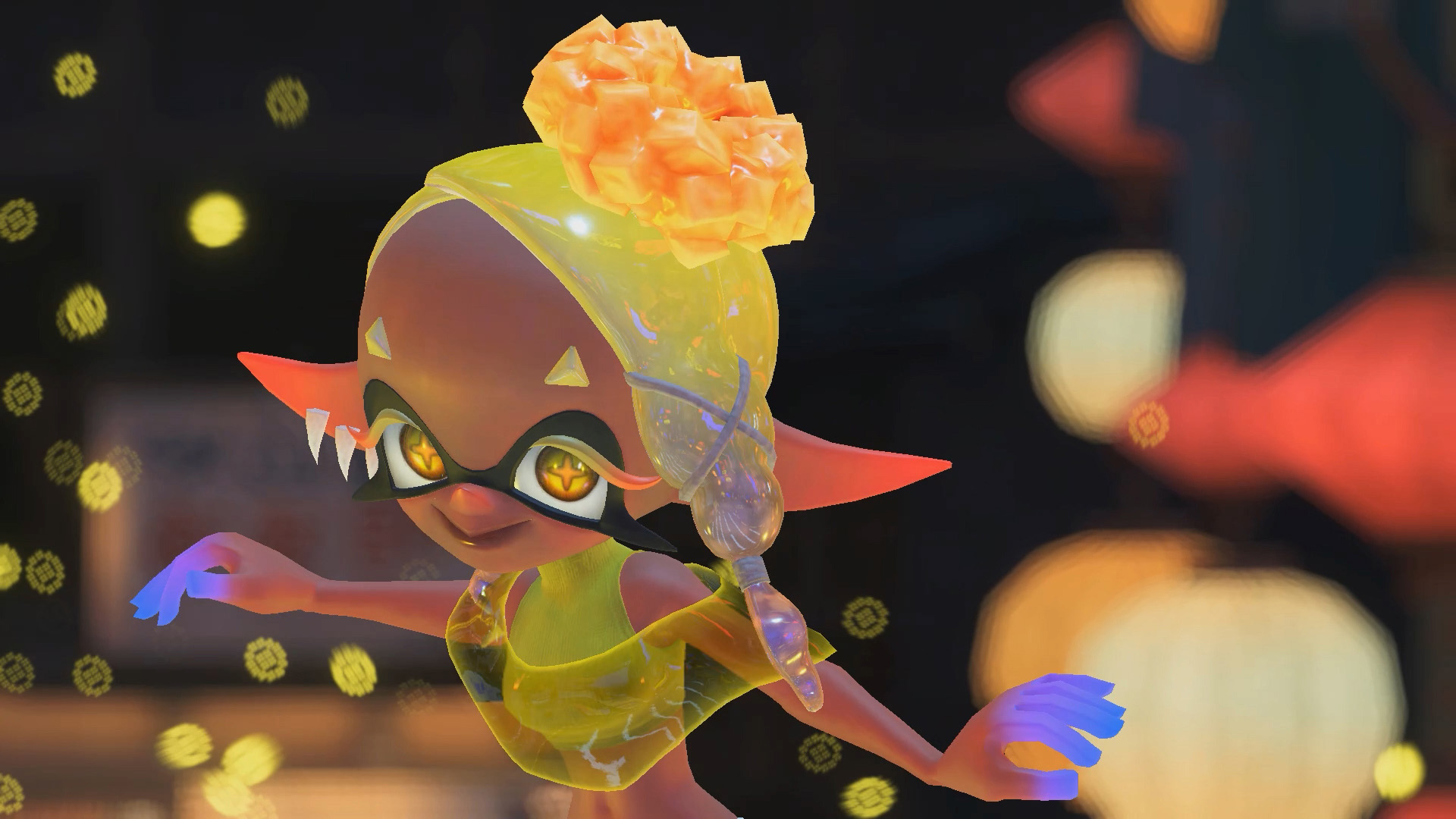 While I initially logged a few hours in Splatoon 3’s ‘Turf War,’ the game type that tasks you with painting the map in your team’s colour, and played around with ‘Salmon Run,’ the title’s horde mode that returns from Splatoon 2, Nintendo’s press multiplayer play sessions were limited. Now that I have played more than a dozen hours of Splatoon 3’s multiplayer mode, I can safely say that it plays nearly identically to Splatoon 2.

Though I’ve spent a lot of time painting maps in Turf War, I’ve also dabbled in several ranked ‘Anarchy Battles’ over the last few days. I enjoy ‘Splat Zones,’ Splatoon 3’s take on ‘King of the Hill’ that tasks players with painting and holding a specific area of the map for a period, along with ‘Tower Control,’ a game type where your goal is to maintain control of a moving tower.

‘Rainmaker,’ on the other hand, is a slog. In this game mode, your goal is to bring the ‘Rainmaker,’ a powerful weapon that sprays massive amounts of ink, to a specific location in the enemy’s base. I have similar feelings about ‘Clam Blitz’ a game type that tasks players with collecting as many claims as possible.

Like Splatoon 2, Splatoon 3‘s gameplay is at its best when it’s focused on painting and splatting other players rather than game types with specific tasks. It’s unclear when Splatoon 2‘s ranked League Battles will make their way to Splatoon 3, but I’m hoping they arrive in the next few weeks. 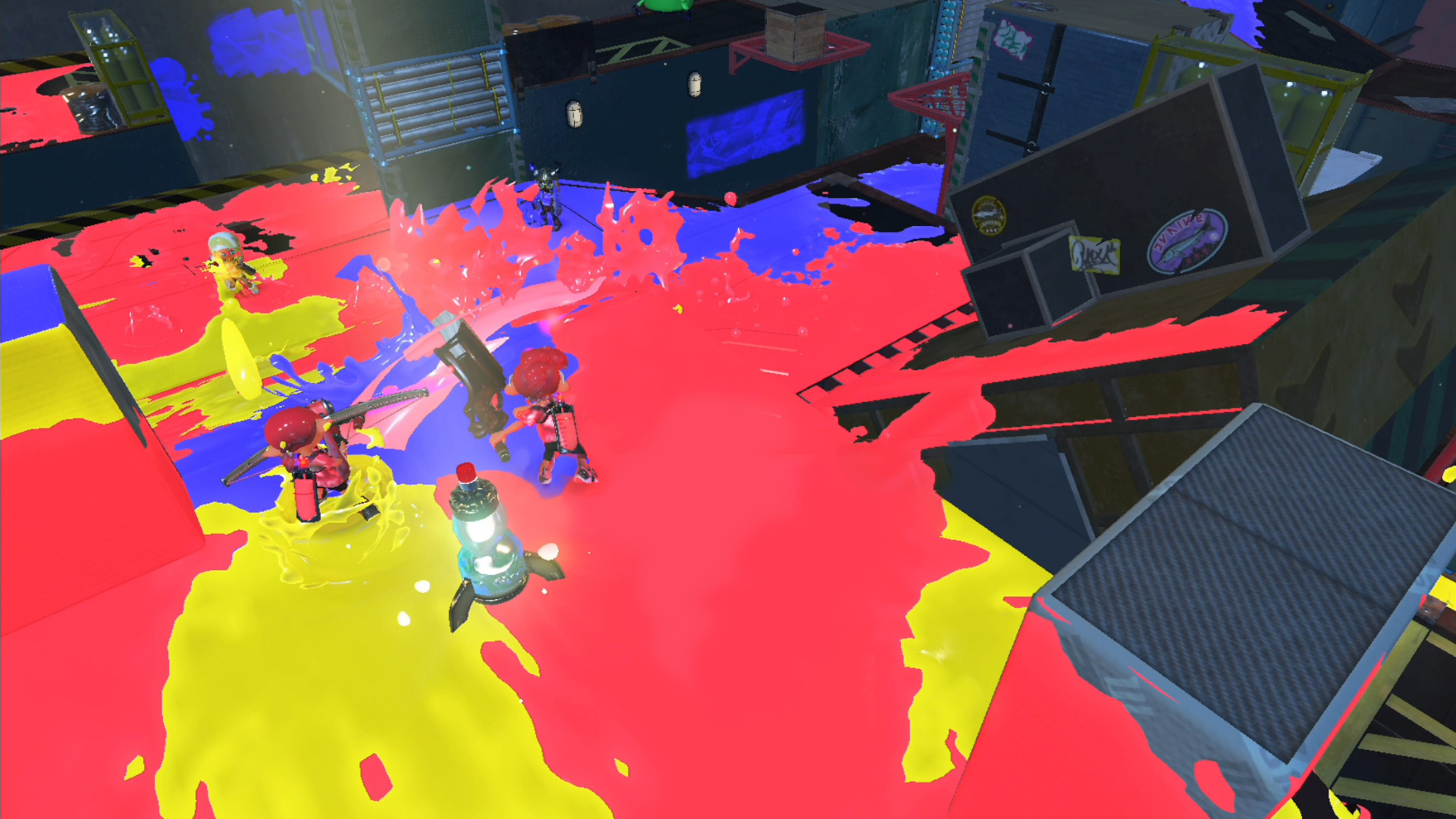 It’s worth noting that Splatoon 3‘s two new moves — the ‘Squid Roll,’ which allows you to reverse jump through ink, and the ‘Squid Roll,’ which powers you vertically up a wall — are welcome additions to the title’s fast-paced third-person action, but they don’t really change the formula that much. That said, I am fond of the ability to select where you want to spawn since it helps prevent base camping, a frequent issue in the first two Splatoon titles. Further, Salmon Run’s cooperative action is still a blast, and the game’s inventive bosses are fun to tackle with a team that’s working together.

My main issue with Splatoon 3‘s multiplayer is that you’re forced to deal with Nintendo’s archaic online service to get in on the splatting action. For example, in order to use voice chat, I boot up my Xbox Series X and log into an Xbox party, then connect my gaming headset via Bluetooth to the Switch. In 2022, it’s beyond ridiculous that most Switch titles don’t feature voice chat in online multiplayer.

There are a few other notable missteps in Splatoon 3, unfortunately. The game doesn’t feature local co-op or multiplayer, though you can play locally across two different Switch consoles if you both own a copy of the game. This, once again, has killed my dream of playing the game with my partner. I understand not adding local co-op/multiplayer is likely tied to the Switch’s hardware limitations, but it still doesn’t make the feature not making it into Splatoon 3 any easier to swallow. More so than ever, Splatoon 3 feels like a game designed to be played locally with friends. 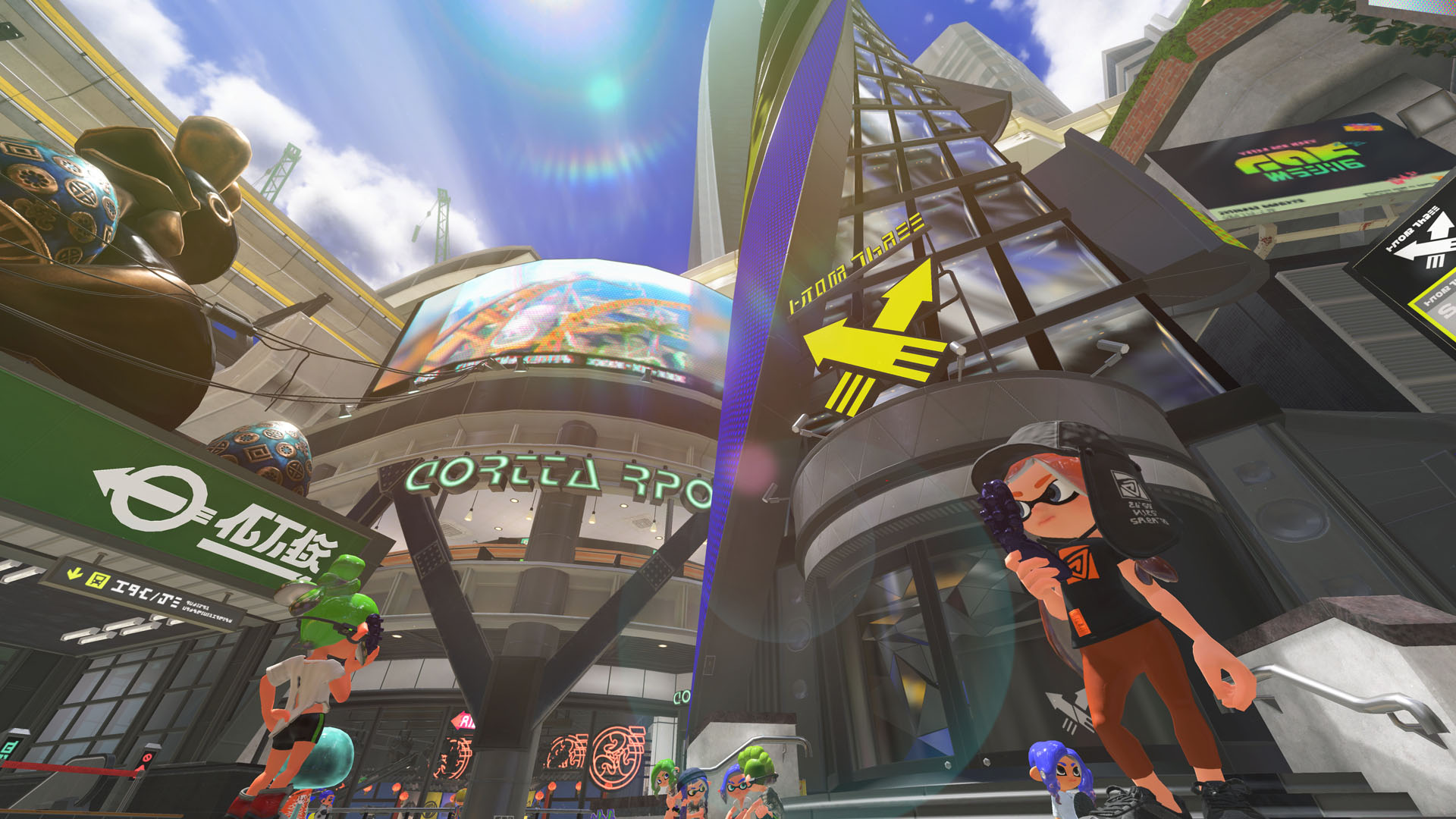 On the plus side, the third entry in the Splatoon series is one of the best-looking titles on the Switch. Everything from its bright-coloured ink to its inventive maps looks incredible, and at times, it’s difficult to believe Splatoon 3 is running on the rapidly aging Switch.

Splatoon 3 often feels like elaborate Splatoon 2 DLC, but is that such a bad thing? The series’ core swimming, inking and splatting mechanics work so well for a reason, and in an industry full of very similar shooters, its simple yet deceptively deep and competitive gameplay manages to stand out.

Despite Splatoon 3‘s shortcomings, the third entry in the series cements the franchise as one of Nintendo’s best recent original franchises.

Splatoon 3 is now available on the Nintendo Switch.