The report found that Bell's maximum download speed was 760Mbps

Bell has regained its title of Canada’s fastest mobile network this year as carriers start the transition to 5G, according to PCMag’s latest report.

After three years with Telus on top, Bell has once again moved into the lead. The report found that Bell’s maximum download speed was 760Mbps, with an average download speed of 232.6Mbps.

The report outlines that Bell and Telus have chosen a simpler path in terms of frequencies, unlike Rogers, which is using an ambitious combination of different ones. Bell and Telus are dedicating a 10MHz channel of their band 66 network to 5G; essentially another channel of 4G that allows the carriers to display the 5G icon

“The problem is, current phones can’t combine them. The current 5G modem chipset in almost all current 5G phones, including the Samsung Galaxy S20 series and the iPhone 12 lineup, can’t use more than one band of 5G at a time,” the report outlines.

PCMag outlines that this may be why the tests didn’t see great performance on Rogers’ 5G network because the phones can’t combine Rogers’ spectrum layers yet. 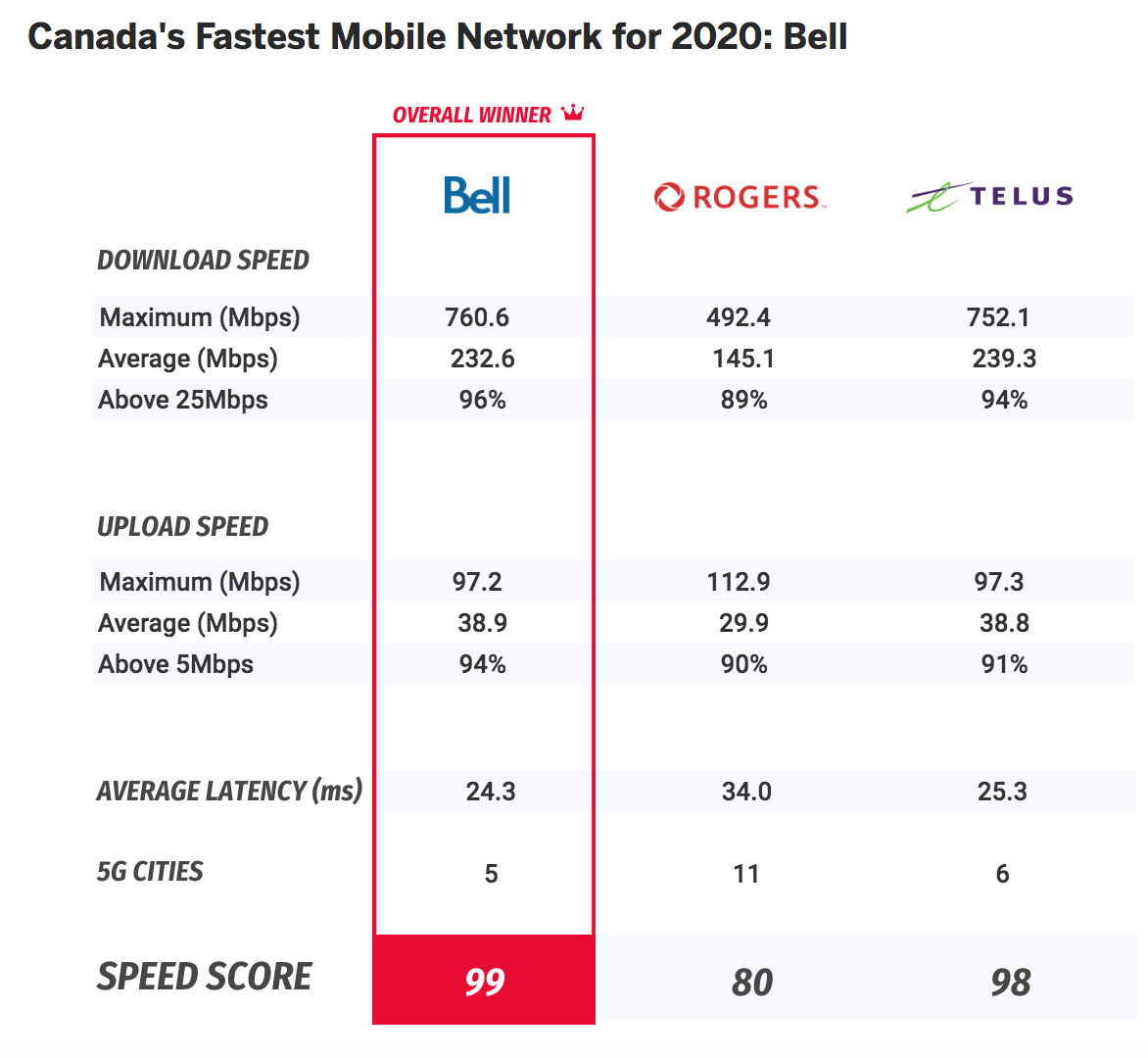 Bell won in 12 cities, Telus won four, and Rogers and SaskTel each won one. Two cities, including Toronto, were tied between Bell and Telus.

Interestingly, Montreal was the fastest major metro area in Canada, with a mean download speed of 209.5Mbps and a mean upload speed of 34.7Mbps. Toronto had the highest peak speeds recorded in all of Canada.

Ottawa had the slowest metropolitan city speeds recorded in the country. The report outlines that this is likely because it’s the only city to have five carriers competing for airwaves.

Further, the report outlines that “there’s nothing about Canadian 5G, right now, that carriers couldn’t be doing with 4G if they wanted to.”

“5G is making a difference, we found; it’s just not a generational one. The carriers are essentially adding another 4G-like channel and calling it 5G,” the report outlines.

PCMag notes that this isn’t the carriers’ fault and that the government needs to act faster. Unlike in Asia and Europe, the CRTC hasn’t made any 5G-appropriate spectrum available to Canadian carriers.

Earlier this year, the federal government pushed back the 3500Mhz spectrum auction from December 2020 to June 2021 due to the COVID-19 pandemic.

The results also show that the mobile networks in rural areas like northern Ontario, southern Quebec and Saskatchewan have distinctly lower speeds than urban areas do, which isn’t surprising.

PCMag conducted its tests between September 14th to October 15th. It used phones that each carrier said best represented their performance of their 5G networks.