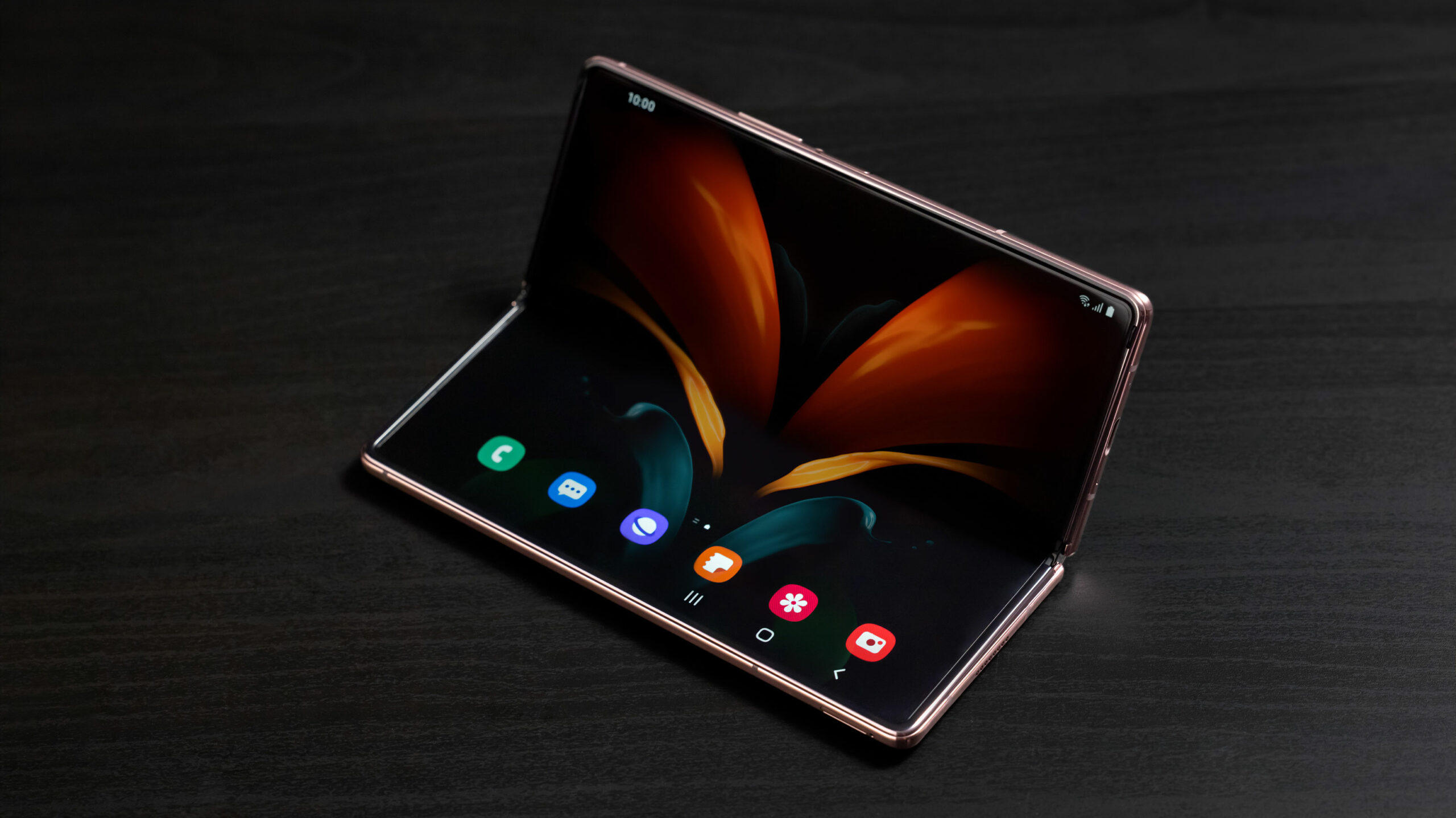 After briefly showing off the often-rumoured, sleek-looking Galaxy Z Fold 2 during its recent Unpacked event focused on the Galaxy Note 20 and Note 20 Ultra, Samsung has now confirmed the foldable smartphone’s specs, Canadian pricing and availability.

Through an elaborate digital briefing, the South Korean tech giant showed off its next foldable smartphone, giving media an extended look at its more streamlined design, larger displays and improved cameras.

The device includes an ‘Infinity-O’ hole-punch on the front and inside instead of the rather large forehead and notch featured on its predecessor. The smartphone’s bezels have also been reduced overall by 27 percent. In true Samsung fashion, the impressive foldable display’s full branding — ‘QXGA+ Dynamic AMOLED 2X Infinity Flex Display’ — features borderline incomprehensible marketing lingo. That said, the screen seems to look great in the videos the company showed off to media, likely in part due to its improved refresh rate.

This display now features an adaptable refresh rate capable of shifting from 11Hz to 120Hz depending on what content is displayed on the screen, similar to the recently released Note 20 Ultra. In that same vein, the back of the smartphone is made of ‘Gorilla Glass Victus,’ with the exterior screen featuring ‘Gorilla Glass 6’ and the inside foldable display being ‘Ultra-Thin Glass’ (UTG).

One of the most apparent improvements to the Z Fold 2 over its predecessor is that the front-facing screen now measures in at 6.2-inches compared to 4.6-inches, making it 1.64 times larger than its predecessor’s tiny display. 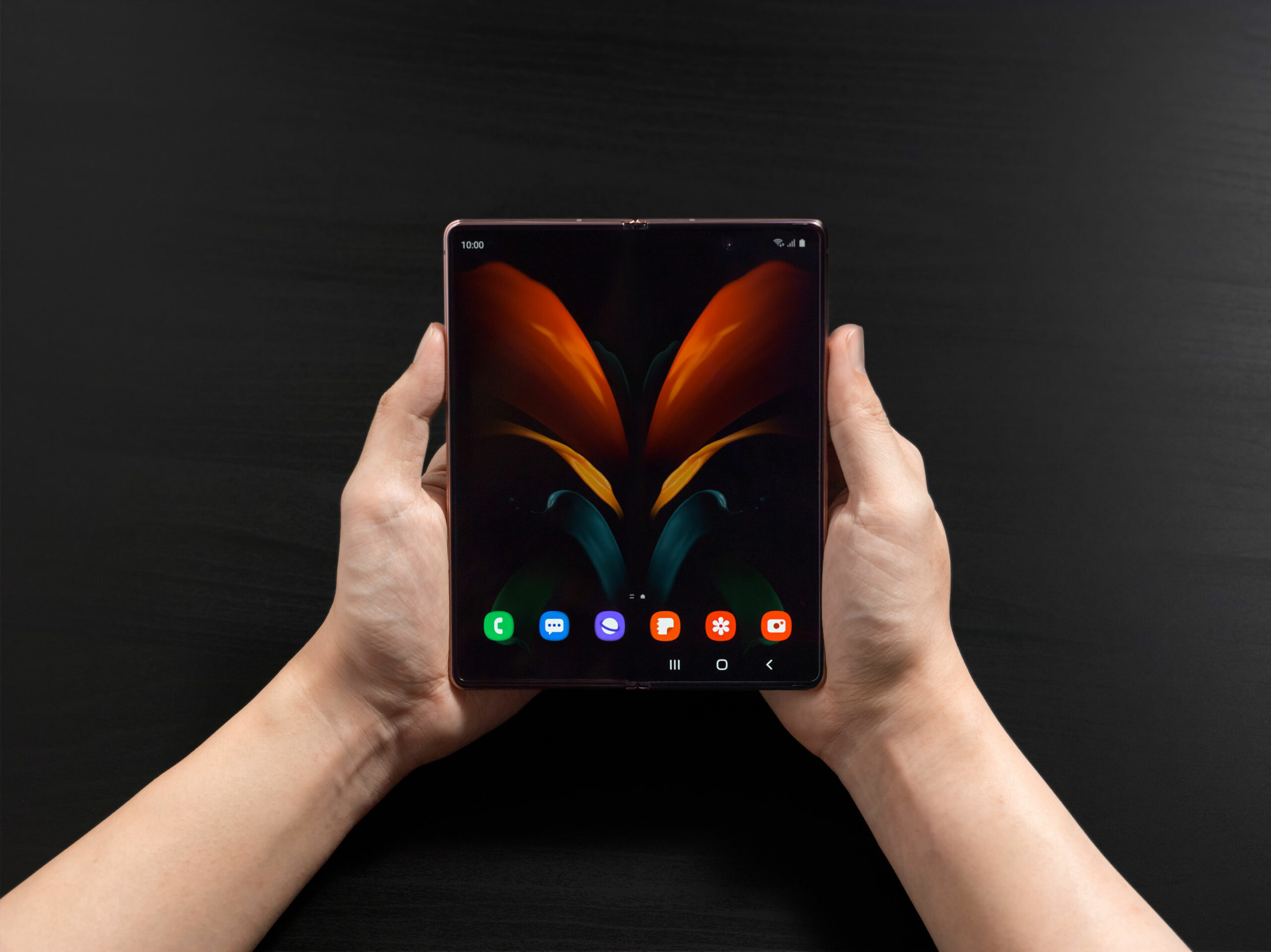 The back cameras are arranged vertically in a sizable camera bump that looks very similar to the Galaxy Note 20 Ultra’s.

Samsung says it’s improved the Z Fold 2’s hinge to prevent debris from getting inside the device thanks to ‘sweeper technology’ consisting of brushes similar those included in the Z Flip, though the company also claims it’s improved the design featured in its clamshell foldable. The hinge has other new features as well, including the ability to free stand between 75-degrees and 115-degrees thanks to what Samsung calls its new ‘CAM’ mechanism. 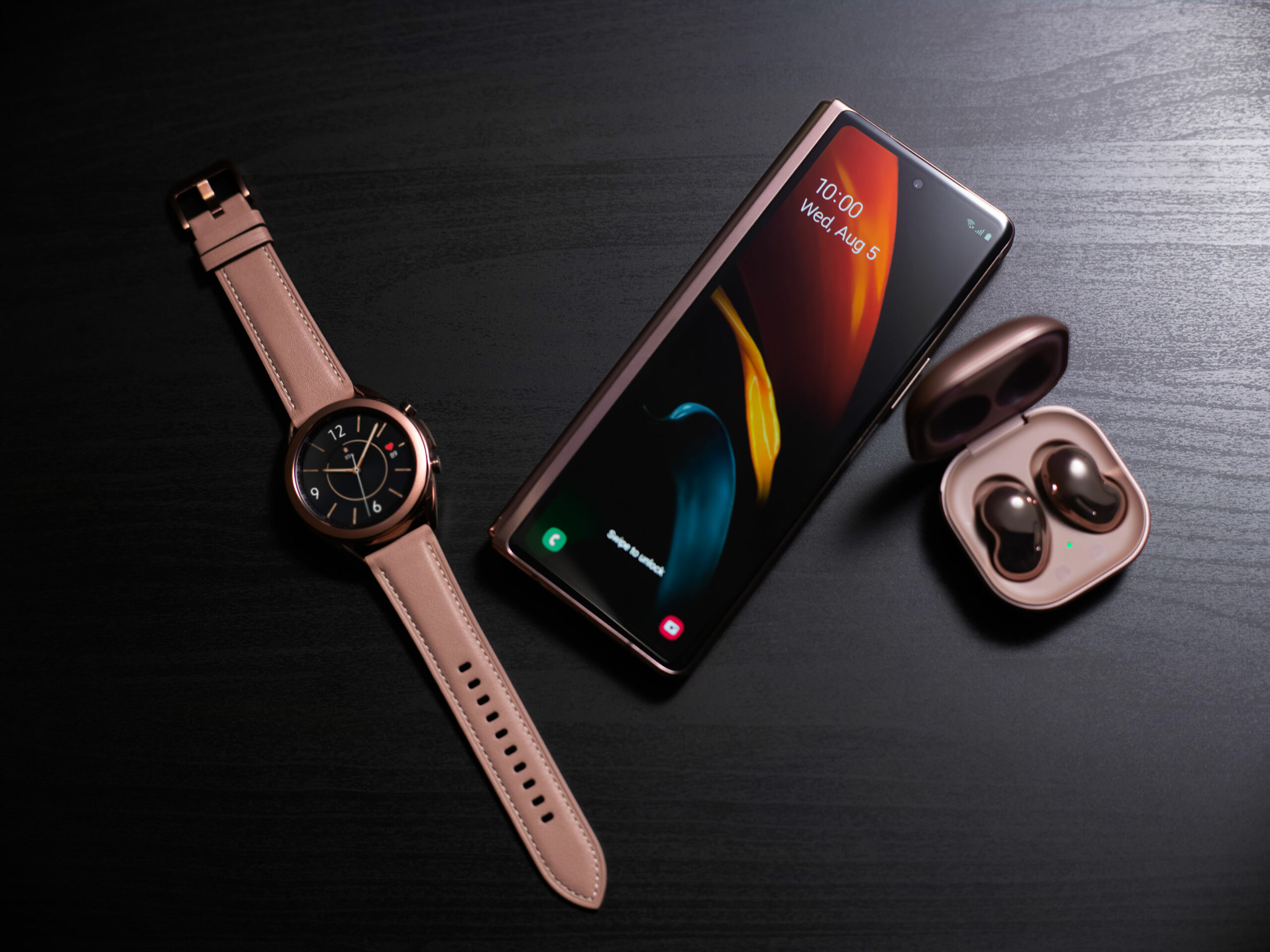 Software features like ‘App Continuity,’ which allows users to launch an app on the front display and open the Z Fold 2 up to continue that same experience on its inner display, are back.

Samsung says it expanded App Continuity with new features, including the ability to unfold between 80-degrees and 160-degrees to transition the UI to ‘Split Mode.’ This displays content on the top half of the screen with more controls and UI features on the bottom half.

Of course, it’s also still possible to unfold the smartphone entirely to shift its display to full tablet mode. 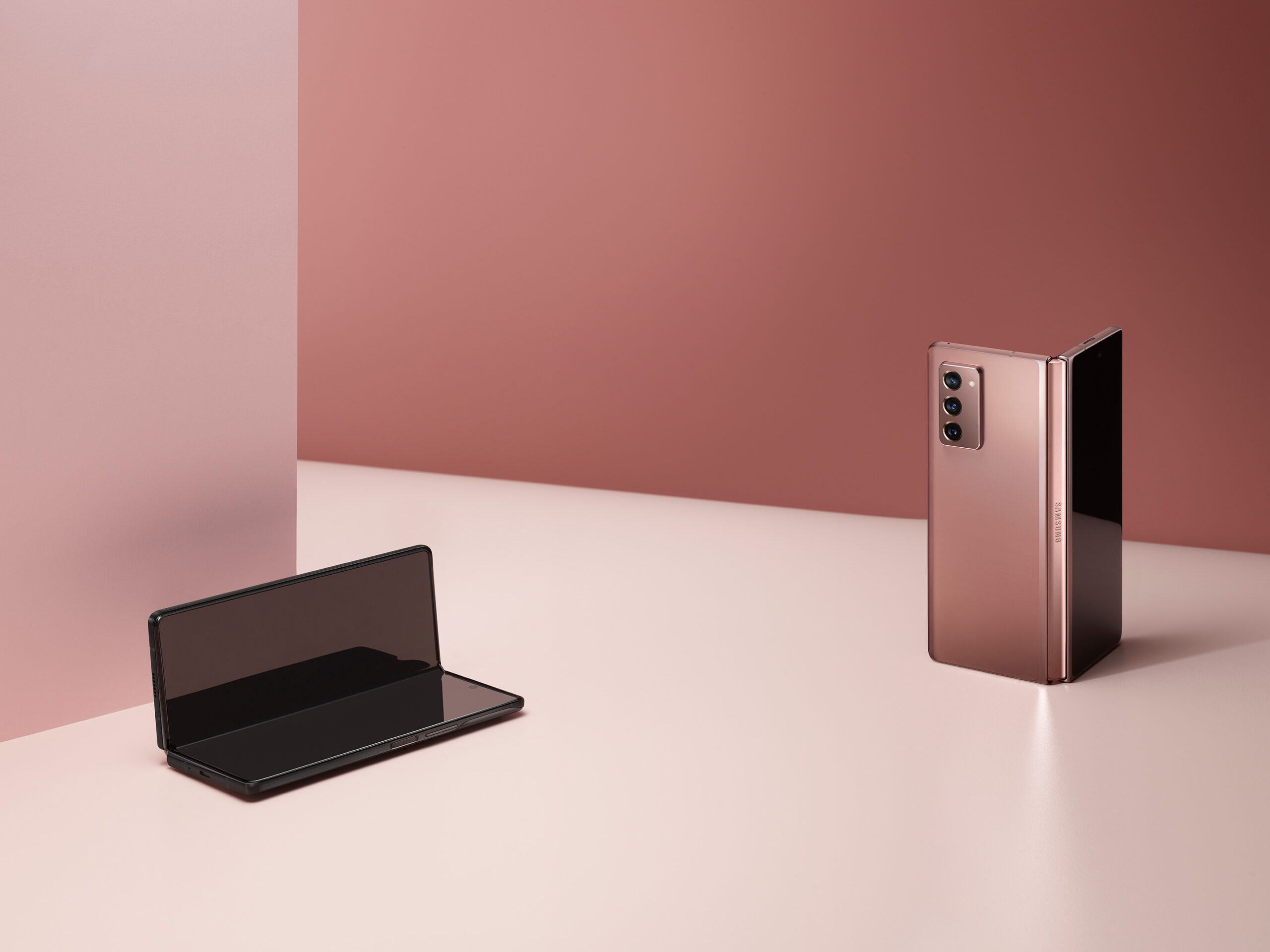 ‘Flex Mode,’ which splits apps across the display, has also been expanded. It now works with YouTube, Samsung’s video player and playing videos through the company’s browser app, giving users video controls and related videos on one half of the screen and the actual video they’re watching on the other.

Other native Samsung apps, including Gallery, Camera, Video call and Calendar, are now compatible with Flex Mode. The Camera app’s controls are on the latter half of the display, but there’s also a preview image that appears on the left side of the screen, giving you an exact look at the shot you just took. Similar to the Z Flip, you can also use the front display as a preview for subjects when snapping a photo, as well yourself, when snapping a selfie.

While expanding the number of Samsung apps Flex Mode works with is a step in the right direction, it still lacks significant third-party support, just like it did with the Z Flip. 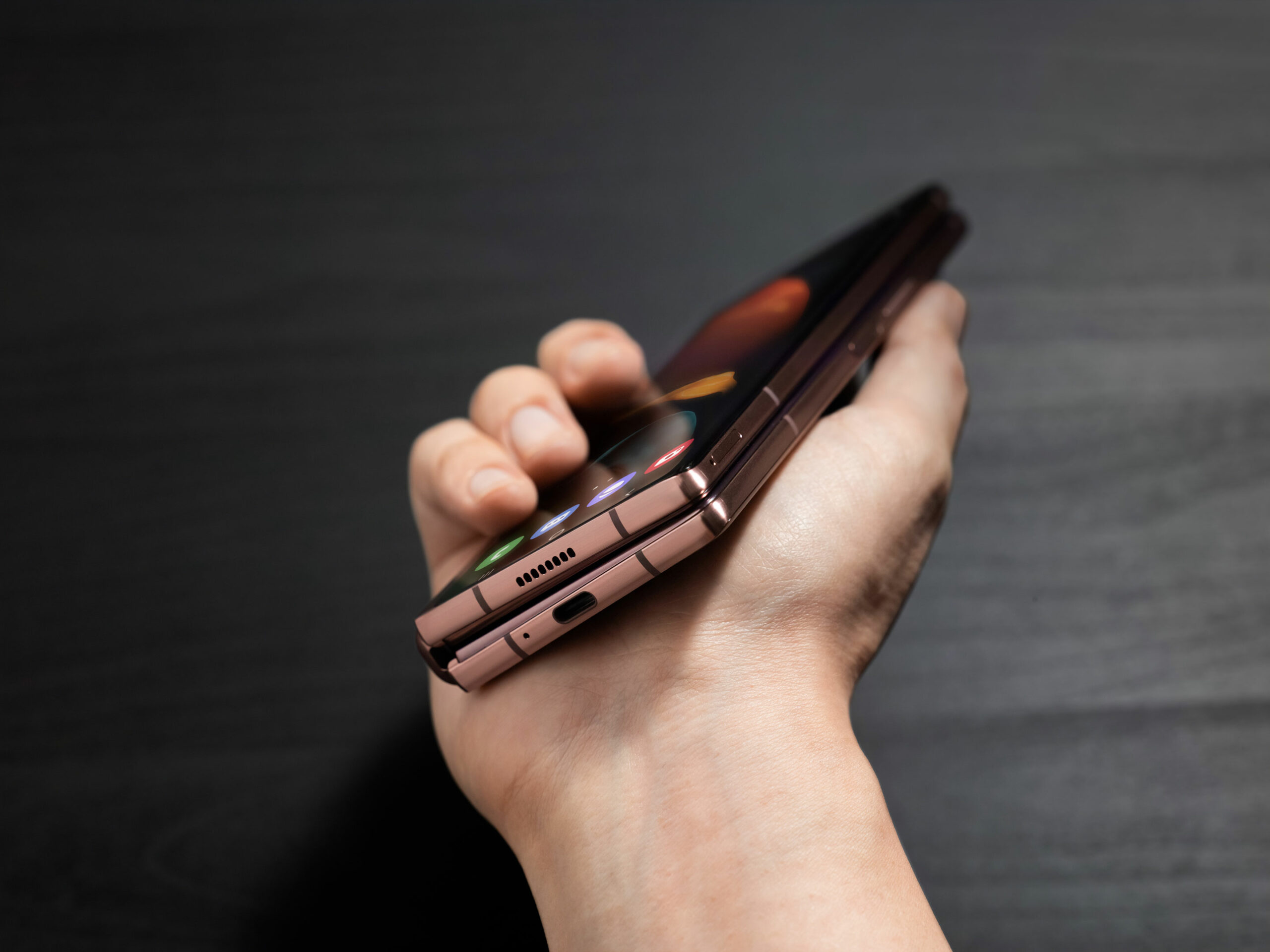 Apps like Microsoft’s Excel and PowerPoint now feature the ability to drag and drop files. Samsung says that Microsoft’s entire Office suite has been optimized for the Z Fold 2’s display. It’s also now possible to seamlessly transfer screenshots between apps with the Z Fold 2 thanks to a new ‘Split Screen Capture’ feature.

Other software features included in the S20 and Note 20 are making their way to the Z Fold 2, including ‘Pro Video’ mode, ‘Night Mode,’ ‘Single Take,’ and ‘Multi-Active Window.’ The phone seems suited perfectly for Night Mode given it can easily be propped up on an object. Regarding video specifically, unlike the Note 20, the Z Fold 2 only supports 4K video and not 8K.

The foldable smartphone’s entire app layout and zoom can also be set to either 420dpi, 480dpi (default) or 540dpi, allowing users to customize exactly how they want the device’s UI to look. 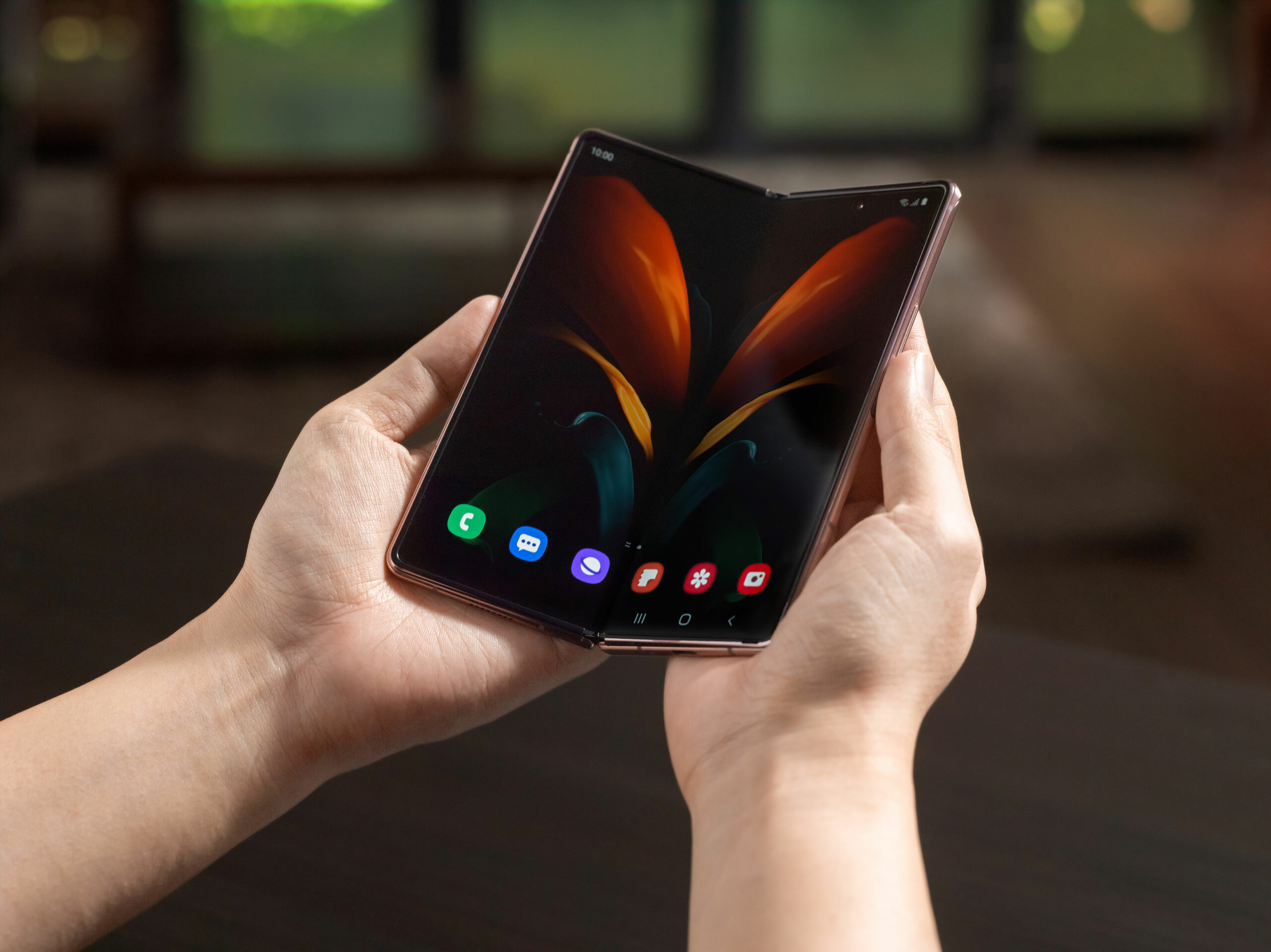 The smartphone is available in ‘Mystic Black’ and ‘Mystic Bronze.’ If you order the device from Samsung’s website you can customize its hinge to be either ‘Metallic Silver,’ ‘Metallic Red,’ ‘Metallic Blue,’ or ‘Metallic Gold.’

Overall, it looks like the Galaxy Z Fold 2 is a significant step forward for Samsung in terms of the foldable smartphone’s design, and its software seems to combine the best features of the first Fold and the more recently released Z Flip. Unfortunately, third-party app support for features like Flex Mode isn’t where it needs to be to make the Z Fold 2 the true multitasking powerhouse Samsung is positioning it as. 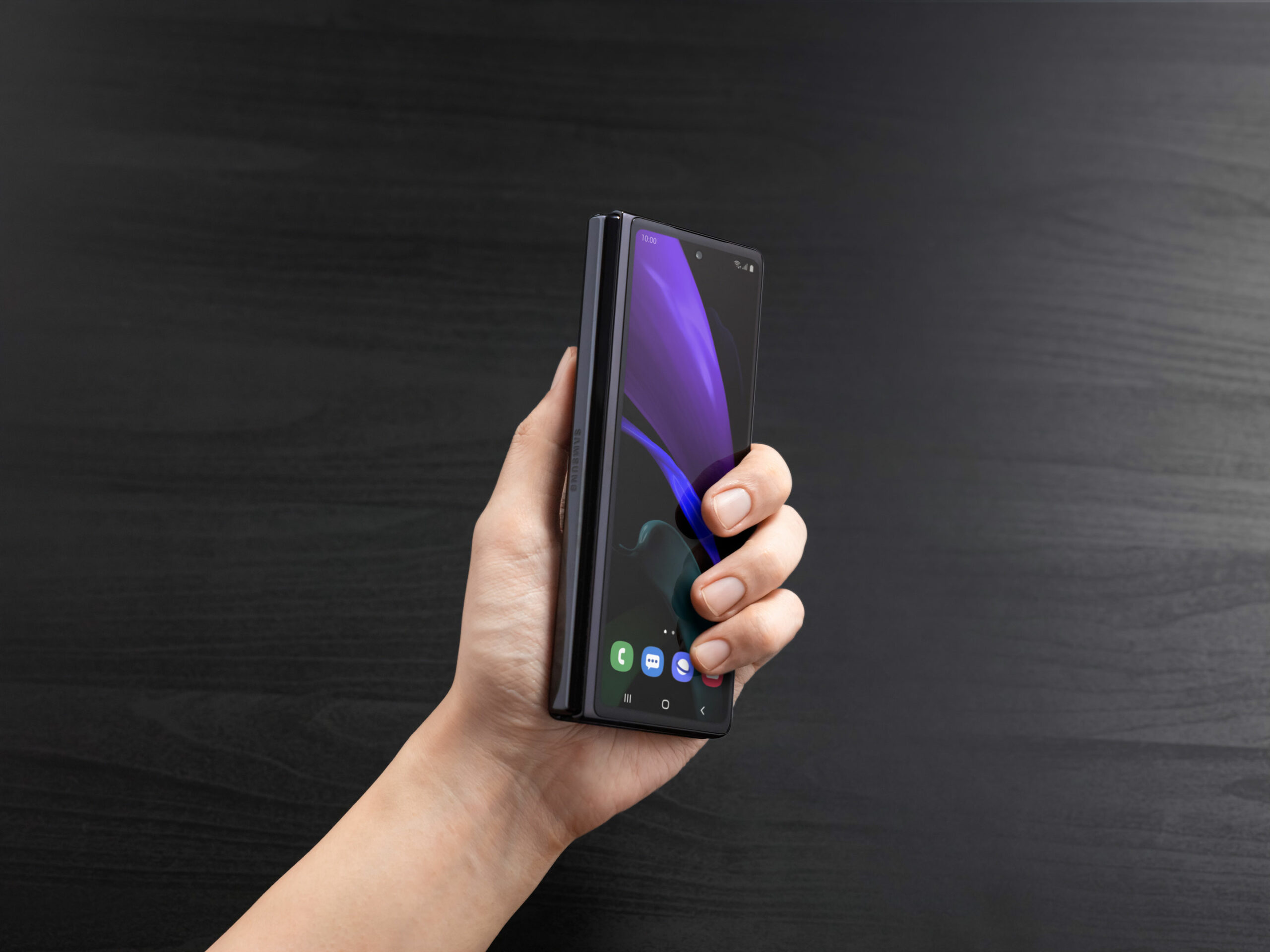 With that in mind, the Z Fold 2’s outward fold still has a more practical purpose when compared to the Z Flip because it gives you more screen real-estate and is essentially a full-sized tablet in a smaller package.

On the other hand, while the Z Flip’s clamshell design is undeniably cool, there’s little practical reason for the phone to fold beyond the few apps that support Flex Mode.

Regardless, it’s hard not to be impressed by the Galaxy Z Fold 2 despite its awkward name that seems to be an effort to erase the memory of early Fold media devices, which experienced widespread display issues. At least on paper, there’s a strong possibility that the Z Fold 2 is the first foldable smartphone worth buying if you’re willing to shell out the cash for one.

Galaxy Z Fold 2 pre-orders are available exclusively though Samsung and run from September 1st until the 17th. There are no pre-order bonuses for the smartphone. The Z Fold 2 releases on September 18th for $2,779.

For context, the first Fold cost $2,599 in Canada. Samsung says that the Galaxy Z Fold 2 will be available to test out at Samsung Experience Stores starting on September 1st.

MobileSyrup will have more on the Z Fold 2 in the coming weeks.