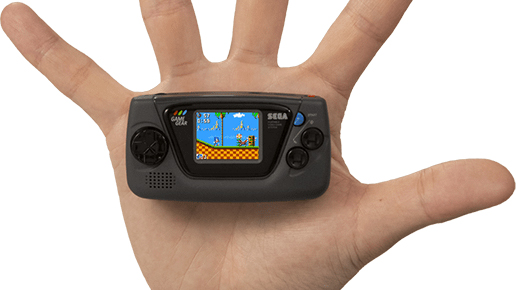 Unfortunately, this isn’t the Dreamcast 2. It also isn’t a successor to the Sega Saturn.

To celebrate the company’s 60th anniversary, Sega has revealed a miniature re-release of its 90s handheld console, the Game Gear. Several questions about the console remain unknown, including if it’s coming to North America. We do, however, know that the handheld is launching in Japan on October 6th. Regarding cost, the price comes to ¥4,980 (roughly $62 CAD), and colours include ‘Black,’ ‘Blue,’ ‘Yellow’ and ‘Red.’

The Micro measures in at 80mm wide and 43mm tall with a 1.15-inch-display, making it roughly a third of the size of the original Game Gear’s screen and even smaller than the Game Boy Micro’s tiny display. Other features include a built-in speaker, 3.5mm headphone jack and the fact that the Micro can be powered by two AAA batteries or a USB micro cable. Further, M2, the developer that handled the emulation for the Sega Genesis Mini, is also behind the Game Gear Micro’s emulation.

The original 8-bit Game Gear was released back in 1991. While the console included a backlit display and better visuals than Nintendo’s competing Game Boy, the handheld featured poor battery life and was relatively bulky and heavy.

The Game Gear eventually failed to beat the Game Boy and was ultimately discontinued in 1997.

Notable Japanese gaming magazine Famitsu recently teased that a significant announcement was coming from Sega this week, with some rumours pointing towards Microsoft utilizing Sega’s brand recognition in Japan to release the Xbox Series X in the region. However, it seems those reports were inaccurate.

Update 06/03/2020: The story has been updated with more details related to included games and the Game Gear Micro’s Japanese release date.