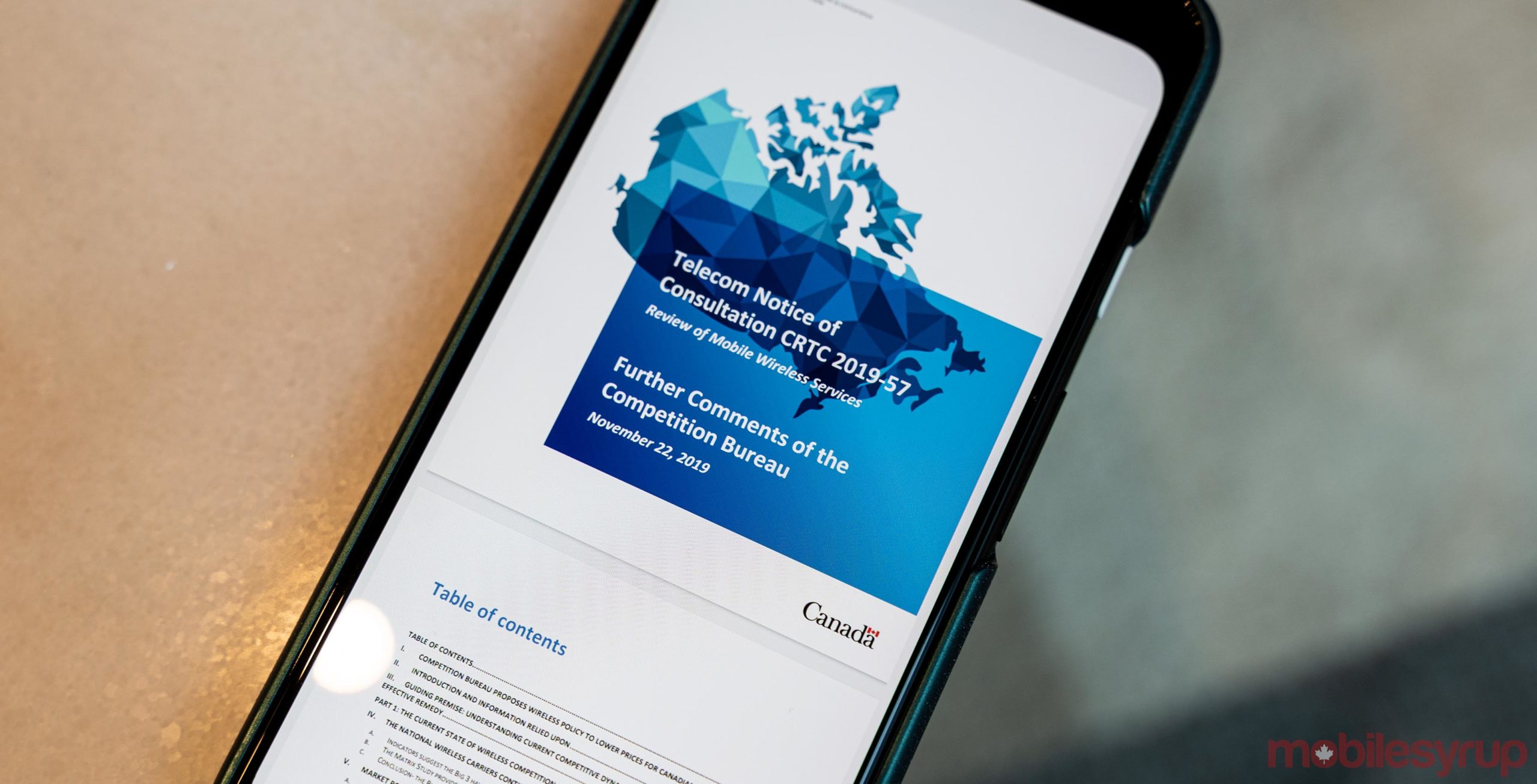 The Competition Bureau recommends that the CRTC “pursue a Mobile Virtual Network Operator policy” requiring the Big Three to “sell temporary access to their wireless networks to regional carriers who intend to invest and further expand their own networks.”

The recommendation would “spur additional price competition in the short term, while avoiding the risk of declining network quality in the long term.”

The bureau’s report on its review of mobile wireless services in Canada was released on November 25th. The review was part of the bureau’s efforts in helping the Canadian Radio-television and Telecommunications Commission (CRTC) with the scope of mobile wireless services in Canada. The CRTC’s review was announced in February and a hearing is set to take place in February 2020.

Anthony Durocher, deputy commissioner for competition promotion research at the Competition Bureau, said in a phone interview that ultimately the recommendation is for a temporary policy to be put in place for a five year period.

“This is to largely coincide with the next review by the CRTC on the wireless sector. The idea is that we are recommending the CRTC takes steps to ensure that if a temporary MVNO access is granted that there be a meaningful commitment by a provider to build a network,” Durocher said. “It’s important and an important condition that the access be temporary so that’s what is really informing the recommendation.”

Durocher added that the idea of this recommendation is to further incentivize new entrants to trigger facility-based competition.

More importantly, according to the report, the bureau recommends the CRTC limit access “only to those who are likely to be able to build a network within a five year period and transition the customers they won as an MVNO to their own network.”

“Specifically, a potential MVNO should have the ‘managerial, operational, and financial capability’ to compete effectively in the relevant market(s) following the mandated MVNO access period,” the report said.

The bureau recommends that the CRTC set clear expectations and have MVNOs make credible commitments “to ensure they will meet deployment requirements.”

That could mean having financial penalties or up-front financial investments “that would be substantial, but still on a smaller scale than if the candidate were to enter as a [Mobile Network Operator].”

The bureau also highlights that while MVNOs can drive lower prices and more choices for consumers, “they also could threaten the demonstrated progress in enhancing competition in this industry to date.”

“The bureau is concerned that the introduction of MVNOs would disproportionately affect these wireless disruptors, putting at risk the positive effects that they have had on pricing, and may impact long-term incentives to invest in high-quality networks in Canada,” the report reads.

According to the 88-page report, the bureau noted that the temporary policy should “adopt a facilities focus” when it is designed.

Further to the idea of a temporary policy, according to the report, the bureau said the CRTC should allow disruptors into the market as a “transitional step to becoming full-fledged facilities-based providers as they continue their expansion.”

“This would ensure that the progress made by these providers to date will continue to pay dividends to Canadians,” the report noted.

Having a shorter period for the policy would incentivize MVNOs to want to invest in network infrastructure in the future and want to grow as companies, the bureau noted.

Proper rate setting should be implemented

The bureau also indicated that having this policy is dependent on proper rate settings.

“If the rate is too high, the policy will have minimal effect on competition. If the rate is too low, wireless disruptors are put at risk, as the economics of being an MVNO are more appealing than investing,” the report said. “This would likely result in a regulated solution in perpetuity.”

The bureau indicates that the CRTC should “adopt a negotiation backstop for setting MVNO rates.”

This would strengthen MVNO negotiating power with the Big Three and “has the benefit of being a lighter touch approach to regulation which can adjust more quickly to changes in the market.”

Along with suggesting that a temporary MVNO policy be created, the bureau set forth several other recommendations that could help with promoting competition.

“These remedies are focused on reducing the cost of switching, and barriers to entry and expansion,” the report said.

The bureau suggests that the CRTC extends the seamless handoff requirement to all carriers. A seamless handoff lets customers enter a roaming market and come back home without any interruptions like dropped calls.

The bureau also suggests that there could be “room for improvement” when it comes to tower sharing and site access rules.

The bureau also recommends that lowering roaming rates might be valuable. Carriers could do this by looking to retail market rates in more competitive markets “to test the reasonableness of roaming rates.”

Finally, the bureau recommends that carriers should have device decoupling. In essence, allowing a customer to be able to switch carriers without it affecting their ability to pay off the device balance.

The bureau recommends separating the handset purchase from the service plan. Bell, Rogers and Telus do offer device financing, but the report notes that this is still not the same.

“They are not functionally separate. A service contract cannot be cancelled without also cancelling and paying the outstanding balance on the device financing contract, thus eliminating any potential benefits to ease switching,” the report reads.

Only 31.3 percent of First Nations reserves met the CRTC’s internet speeds target in 2018