Facebook will soon start compensating people for participating in an app program that collects data from ads that are presented to the user.

In a news release, Facebook said it is “offering transparency, compensating all participants, and keeping people’s information safe and secure,” through the new program called ‘Study.’

Users will be given the option to register, and if they qualify, they’re then invited to download the app.

Once they are invited, users will be able to find Study from the Facebook app.

The news release said the app will inform users how it works and what information will be shared to the app. Users will then be able to once again confirm if they want to participate.

“This is all accessible before participants provide any market research information to the app,” Facebook said. “Anyone who uses the app will be compensated for contributing to the research. Only people who are 18 and older will be eligible to participate at launch, and all participants will be able to opt out at any time.” 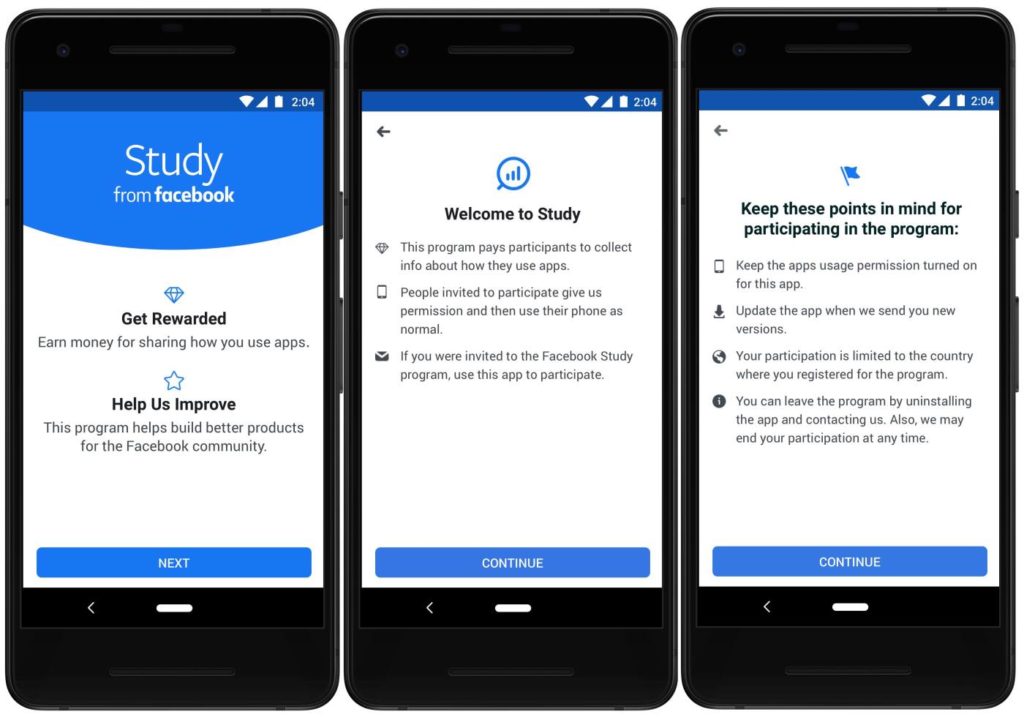 Facebook said it is working with Applause to manage the logistics of the market research program. Applause will also be in charge of the registration process, all compensation to participants, and customer support.

Facebook intends to collect from users part of the program details on apps installed on a participant’s phone, the amount of time spent using those apps, the country that a person resides in, the device network they use and app activity names.

The app program will not collect user IDs, passwords, any content with respect to photos, videos or messages, Facebook said.

“We also don’t sell information from the app to third parties or use it to target ads, and it is not added to a participant’s account if they have one,” Facebook said.

As of now, the app program will only be available in the U.S. and India and Facebook intends to expand it to other countries.

“Approaching market research in a responsible way is really important. Transparency and handling people’s information responsibly have guided how we’ve built Study from Facebook. We plan to take this same approach going forward with other market research projects that help us understand how people use different products and services,” Facebook said.

This news comes at a time when Facebook has faced severe scrutiny for being involved in the Cambridge Analytica scandal. The data breach involved the research firm that helped U.S. President Donald Trump win the 2016 presidential campaign by harvesting data from millions of Facebook users.

Canadian lawmakers are currently trying to work with Facebook and other digital platforms regarding regulation.