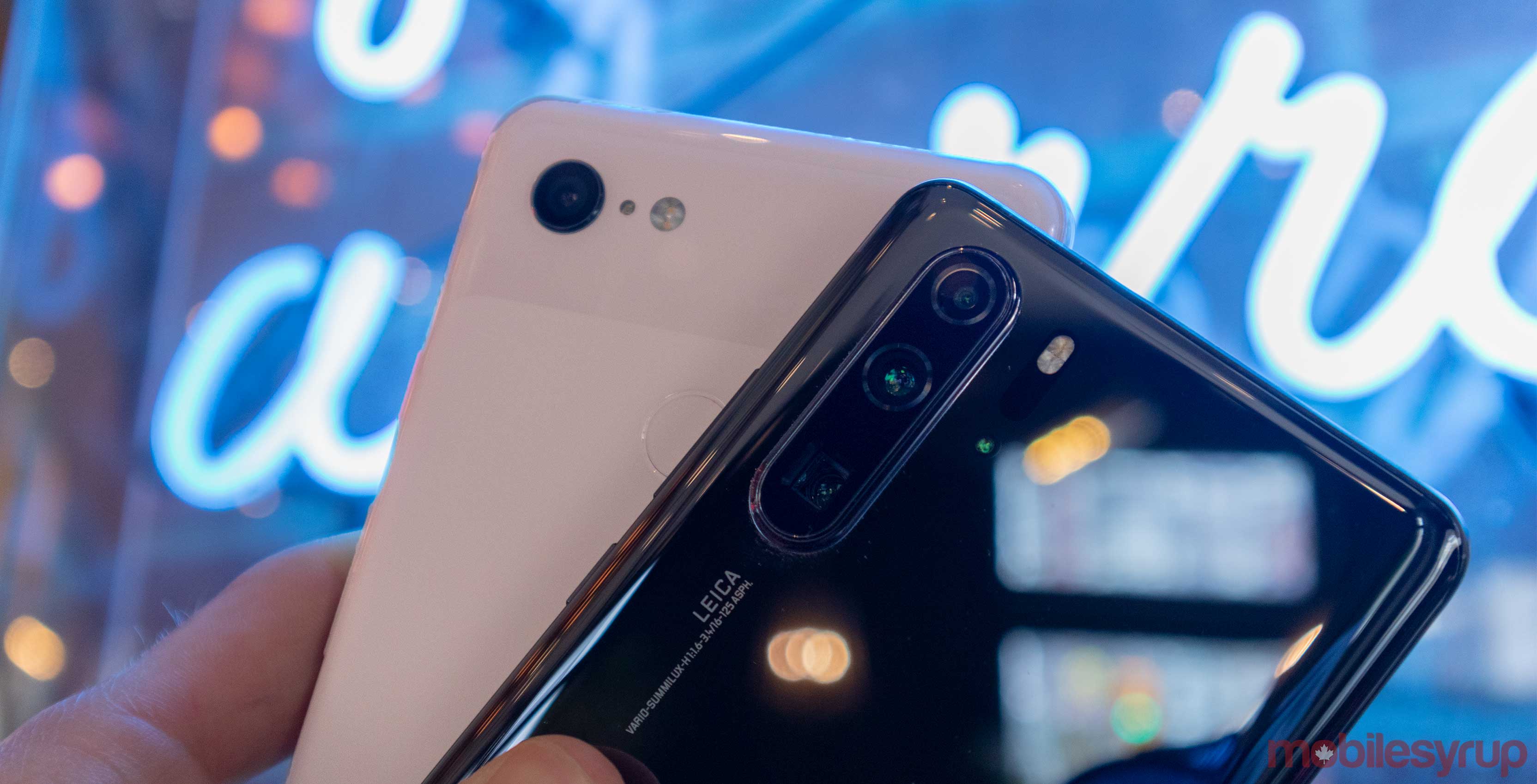 Huawei invited us to Neon Demon studio in Toronto to test out the P30 Pro’s camera, and I thought it would be a great opportunity to compare the handset with another great Android camera, the Pixel 3’s shooter.

With both phones in hand I trekked down to the neon filled studio after work, and these are the results.

To start, both of the devices take great shots and are comparable under most circumstances. As seen in the photo above, there’s almost no difference at all in terms of quality.

Since the P30 Pro’s aperture is a bit lower at f/1.6 when compared to the Pixel’s f/1.8, the phone seems to be adding additional blur to the background of the photos. The above shot has some blur around the plugs and the below image features a little bokeh in the background.

Given the difference in aperture is 0.2, my guess is Huawei is doing something with software or its ‘Master AI’ feature to create the subtle bokeh. The P30 Pro also features a time of flight sensor that could help the device better gauge the depth in a scene.

Master AI is Huawei’s artificial intelligence camera software that can tell what you’re taking a picture of and then change the camera settings or boost a section of the photo accordingly. Since there was so much neon in the studio the AI often tried to throw me into the ‘Stage performance’ mode. Other examples are when you’re close to something, the phone turns on ‘Macro’ mode, or if you’re taking a picture of a person, it switches to ‘Portrait.’ 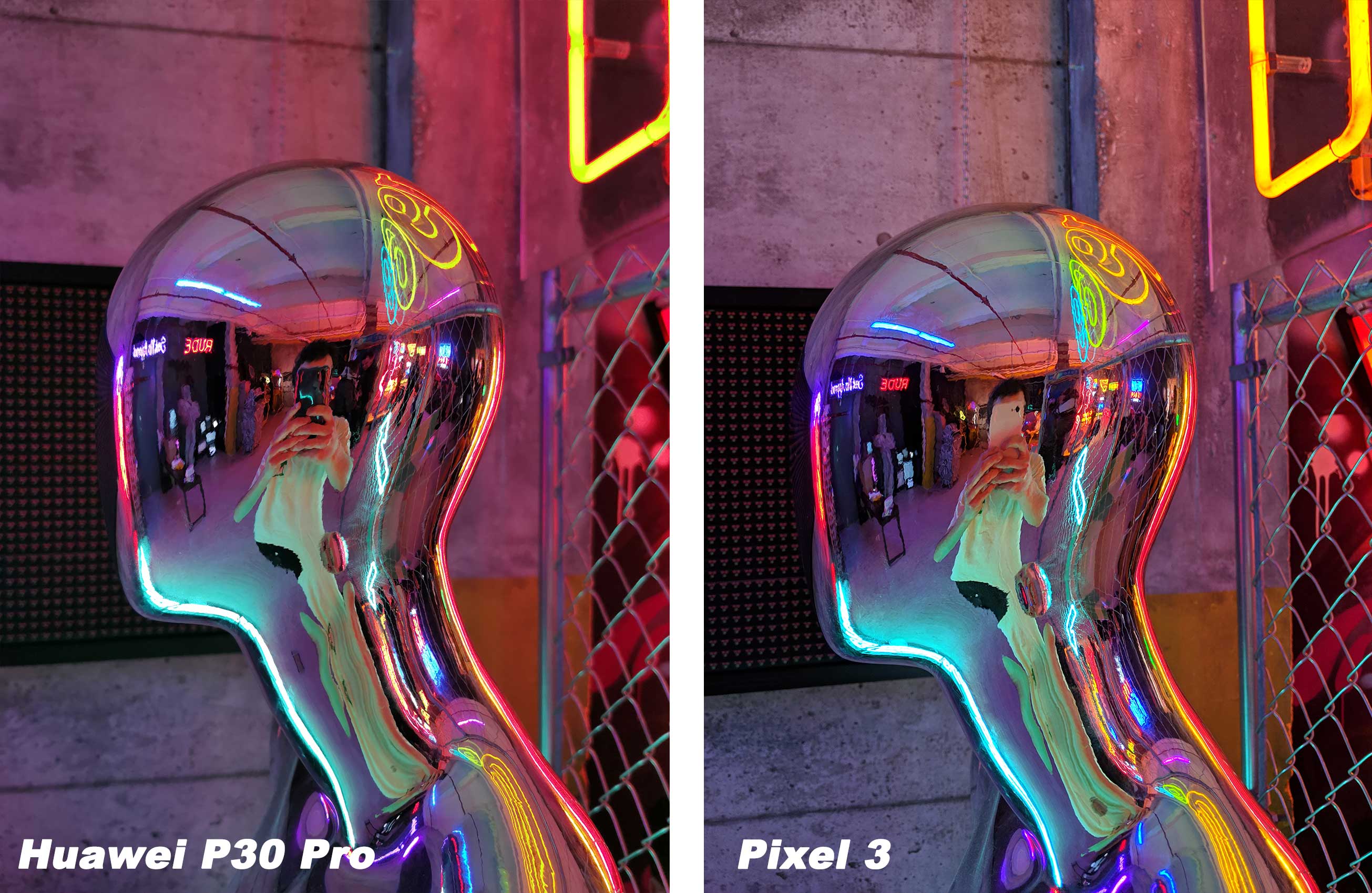 The next photos are also nearly identical, but since there are fewer colours present, you can more clearly see the default tones of each device’s camera.

Once again, neither photo is terrible, but it’s worth noting the difference.

One of the areas where the P30 Pro excels is with its excellent camera app. For most people having Master AI is going to boost their photos in the right way to produce sharable shots that don’t need additional editing. Of course, you can turn this feature off with the touch of a button if it’s not your thing.

On top of that, Huawei offers much more control with its varying modes and specifically its ‘Pro’ mode. That said, you could always download a more advanced camera app for the Pixel 3.

It’s worth noting that both of the phones struggled with the refresh rate of the neon, resulting in scanlines. That said, since there is a ‘Pro’ mode with the P30 I was able to adjust settings like shutter speed easily. As a result, I found the right shutter speed to snap a clean image.

You can also do this with the Pixel, but you’ll need a third-party camera app like Manual Camera Lite.

Next up is the phone’s selfie prowess.

In my test, the Pixel 3 was able to capture additional colour in selfies and also offered a more balanced exposure. The P30, on the other hand, performed well but images were a little overexposed. The Pixel’s wide-angle selfie camera gives the phone an edge here since it offers more room to play with.

The P30 Pro also has a wide-angle lens on the back of the phone that lets you shoot much wider shots compared to the Pixel 3’s standard lens.

Finally, I compared slow motion on both the phones to see how they handled it.

The P30 offers a slower setting, but when you’re at that super slow setting, you can only records for 2.15-seconds, resulting in only about 10 seconds of footage.

I didn’t end up testing every camera feature of both phones, but if you’re looking for an in-depth analysis of either, check out our MobileSyrup camera-specific reviews for the P30 Pro the Pixel 3.

In my opinion, both phones performed well and shot terrific pictures. With that in mind, I’d still say that since the P30 Pro gives the user more control out of the box, it’s the phone I’d rather have in my pocket given it’s capable of overcoming challenging photography scenarios that the Pixel doesn’t handle as well. It’s also worth mentioning that the P30’s zoom blows the competition out of the water.

I wasn’t able to take any night photos since the room was full of neon, but in Mobilesyrup’s experience both phone’s do a surprisingly great job of brightening photos, especially the Pixel 3’s excellent ‘Night Sight’ feature.

Still, if you’re looking to snap great and relatively simple photos, both of these devices can easily get the job done. In the end, it really comes down to personal preference.