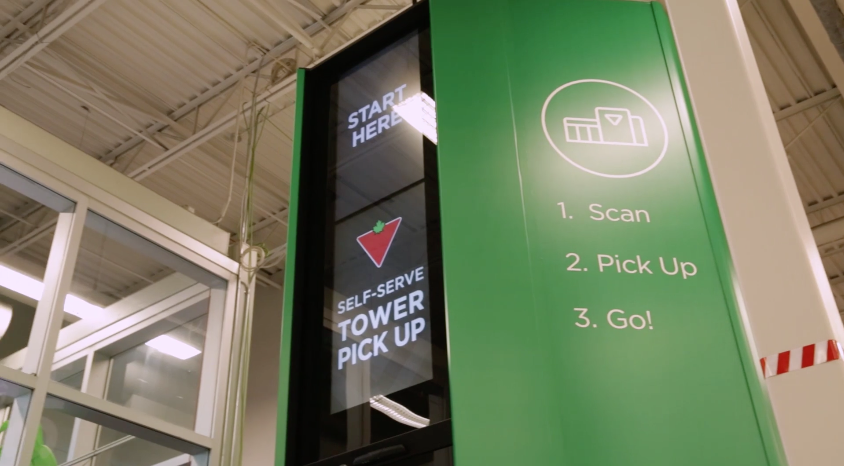 The retail landscape in Canada is changing.

While major online retailers like Amazon and eBay have increased their presence in Canada, the country’s big-box retailers are pushing forth and investing in new technologies to increase convenience and customer loyalty.

Canadian Tire announced today that as part of its new e-commerce strategy it will launch a “first-of-its-kind Self-Serve Pick-Up Tower in Canada.” These towers will allow the company’s customers to order online and pick up their orders in-store at a massive 16-foot self-serve kiosk “in less than a minute.”

The company notes that the towers are currently located at five locations across the country in Vancouver, Calgary, Saskatoon and Toronto.

“We’re a test and learn culture and a big part of that is finding new ways to help our customers shop when they want and how they want,” said Greg Hicks, president of Canadian Tire Retail. “We’re very excited to be the first retailer in Canada to introduce the Self-Serve Pick-Up Towers to some of our busiest stores as one more example of how we’re meeting our customers’ evolving needs.”

It should also be noted that competitor Walmart Canada is currently testing two of its own towers in Oakville and Mississauga, with plans to bring more to market sometime in “early 2019.”

Canadian Tire also noted that it’s testing new pickup options in the Ottawa area, specifically “self-serve lockers and automated check-in terminals.” The check-in terminals give those who purchase online the option to come into the store and enter a PIN code into a tablet, which summons a staff member to bring them their order.