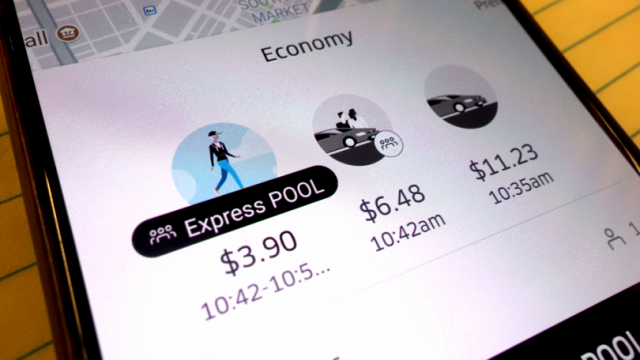 The service functions like a cross between Uber’s POOL carpooling service and public transportation.

Much like public transportation, Express POOL users must walk to and from specific pick-up and drop-off points, while simultaneously sharing their particular ride with other Uber users.

According to Uber, the Express POOL service is supposed to provide users with a more streamlined carpooling service, while also reducing the overall cost of an Uber trip for all passengers involved.

According to Neil Kamireddy, the product manager for Express POOL, the idea for the new service began with a single question: “What if we add walking into the mix?”

Kamireddy told reporters that Express POOL trips are “entirely dynamic,” meaning that even users who start from the same pick-up location every day will most likely never take the same route twice — assuming that they don’t have schedules that align with other passengers who use the service at the same time every day as well.

The Express POOL service works much like Uber POOL. Users set a pick-up location and destination and wait for the platform’s algorithm to match them with a driver.

Unlike Uber POOL, however, Express POOL leaves the possibility open that passengers will need to walk to a specific location for a pick-up.

The app then matches Uber drivers to other passengers along the fastest route, while also potentially instructing subsequent passengers to walk to specific pick-up locations.

Once passengers and drivers have been matched, the app will determine a drop-off location within 250 metres of each passenger’s destination.

It’s important to note that, in spite of the launch of Express POOL, Uber has no plans to phase out its UberX or Uber POOL services.

“We’re really shifting our vision from just being a ride-sharing company to a platform,” said Adam Blinick, Uber Canada’s director of public affairs, during the same media preview event.

Blinick also acknowledged that Express POOL isn’t the perfect product for everyone.

Individuals with accessibility needs — for example, individuals who use wheelchairs for mobility — might be better served using Uber’s other services rather than Express POOL.

The ultimate goal, however, is to put more people into fewer cars.

Uber POOL reportedly accounts for approximately 20 percent of all Uber trips in POOL cities, while users have taken over one billion POOL rides since the service first launched in 2014.