Canadians use less than half the cellular data Americans do: Tutela report

But we pay more for it, on average 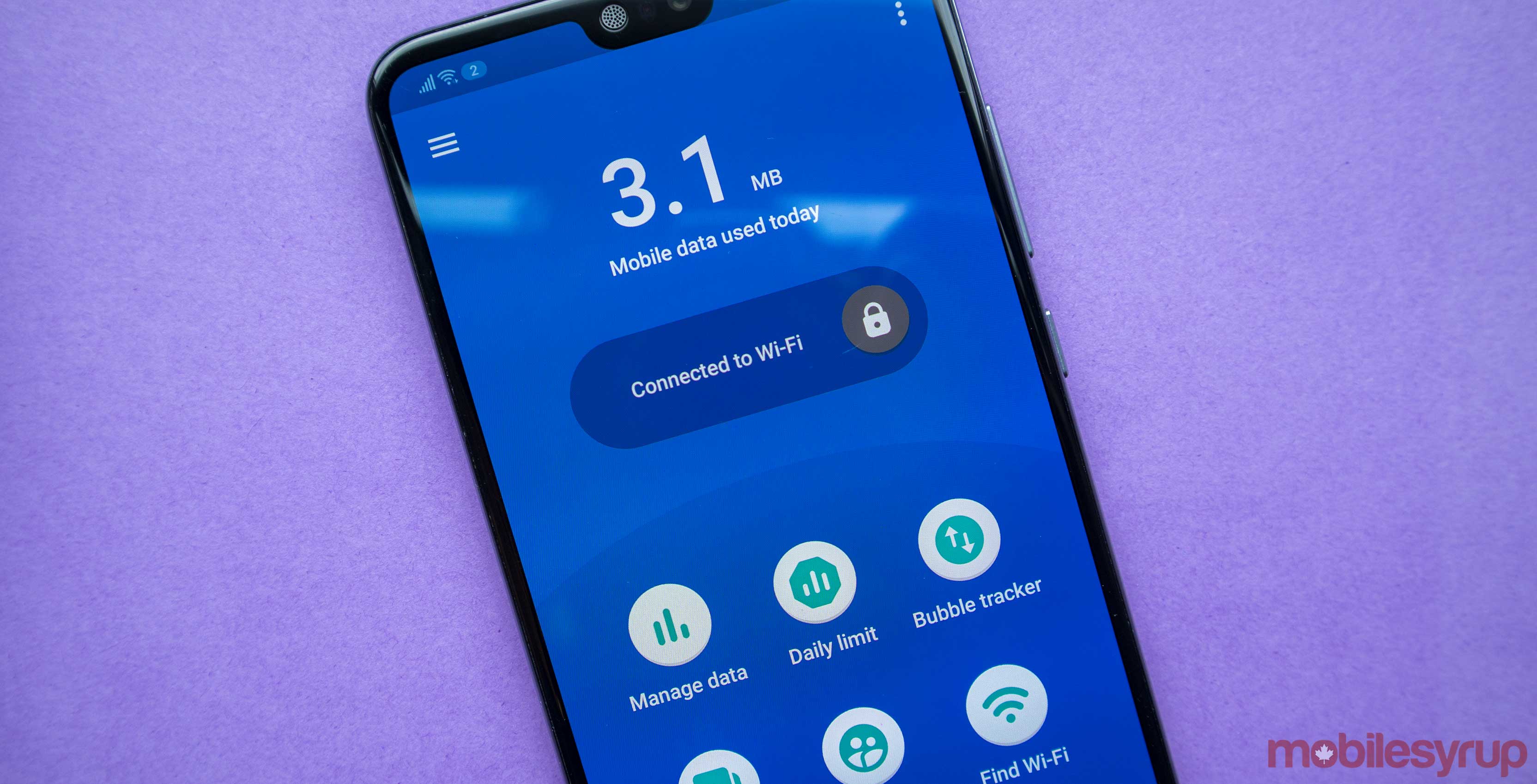 Canadians use 56 percent less mobile data per month than the average American, according to a study published by Victoria-based mobile data company Tutela.

The study collected data from over 48 million mobile data users across 10 countries during May 2018, including over 100,000 users in Canada.

Among 10 other countries, Tutela’s data shows that Canada is tied with Brazil in last place with respect to the average amount of monthly mobile data consumed per user at 2.7GB. Comparatively, the average mobile user in the U.S. uses 6.1GB of cellular data per month, and users in India topped the charts with a 6.8GB monthly average.

Notably, Canadians use a monthly average of 8.4GB of Wi-Fi on their mobile devices, roughly the same as Americans (8.3GB) — indicating high overall use of internet on mobile devices. 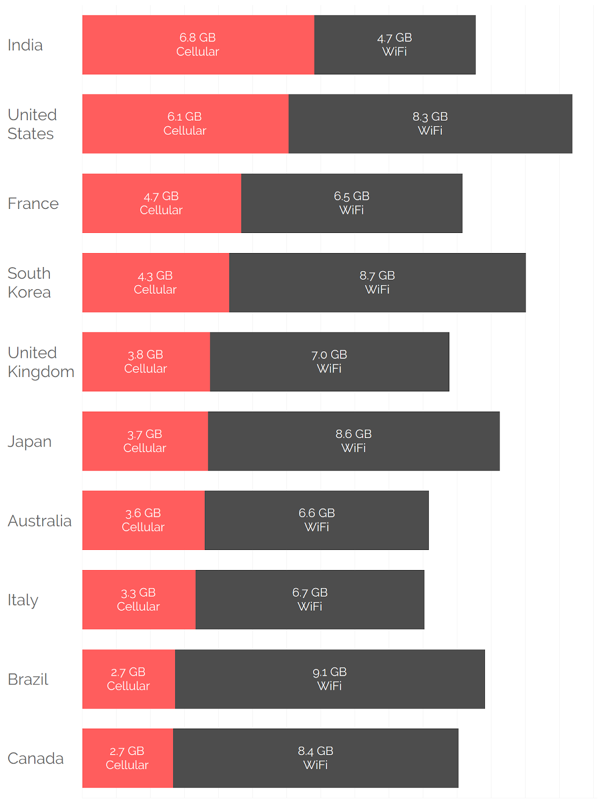 Tom Luke, vice president of sales and partnerships at Tutela, cited a report from mobile analytics firm Rewheel, which assessed how many LTE gigabytes could be purchased at different pricing levels in countries across the world. The report indicated that while €30 (roughly $50 CAD) purchases a monthly plan with approximately 100GB in the U.K. — or 10GB in the U.S. — it only provides Canadians with approximately 2GB.

A study on international wireless pricing released in December 2017 by Nordicity, and commissioned by Canada’s federal government, also confirmed high wireless prices for Canadians in comparison with global averages. The study revealed that Canadians pay some of the highest rates among a group of countries containing the U.S., Italy, Japan, Germany, U.K., France and Australia.

“It is possible that price could be a key factor in Canada’s low cellular data consumption, particularly when you consider that they use the same amount of data on Wi-Fi as their American counterparts,” said Luke in a press statement. 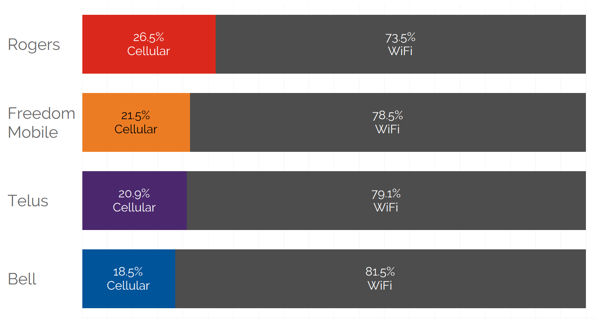 Between the Big Three and Freedom Mobile, Rogers customers consume the most data on average — 26.5 percent cellular (the rest, 73.5 percent, on Wi-Fi). Bell customers use the least, with 18.5 percent.

“In our recent report looking at Canadian mobile network quality, our results showed Bell achieving the fastest network speeds, with Rogers the slowest, which could suggest network congestion is impacting on Rogers network performance,” Luke suggested in the press statement.

A CWTA spokesperson said in an email to MobileSyrup that the study provides a “simplistic view of the methods by which people access content and the internet, and why.”

“As the release states, there can be many reasons for varying data consumption patterns from jurisdiction to jurisdiction, including penetration rates for different forms of connectivity and TV supply, regulatory environment, etc.” continued the spokesperson.

“Suggesting that the reason for higher data consumption in the U.S. is due primarily to differences in wireless pricing flies in the face of oft-cited reports (such as OECD and Nordicity), which rank Canadian wireless prices as comparable to and [in] some cases lower than those in the U.S.”

Tutela gathers its information from tests conducted in the background of over 3,000 popular Android and iOS apps and games, which it pays to host the software. Tutela told MobileSyrup that users of those apps get a pop-up asking if they want to allow the company access to perform tests.

Tutela then sells its data, in the form of reports and tools for improving network performance, to customers, a significant portion of which are wireless operators. The company confirmed that at least one Canadian operator is a customer.

Unlike other speed testing companies, Tutela stated that it downloads a smaller, generally 2MB, file to gather its data.

Luke told MobileSyrup that this file measure real-world usage better than speed apps like Speedtest by Ookla or OpenSignal, since it measures lots of small downloads, rather than doing one extended speed test of a much larger data packet, as is the case with the aforementioned platforms. This puts more emphasis on the quick acceleration required for short downloads than top download speeds (which can be ramped up to slowly).

He added that this is the reason the speeds from Tutela’s tests aren’t as impressive as those seen with the other major speed testing platforms.

In addition to this study on average cellular data amounts used per month, Tutela recently released a March 1st to May 31st Canadian speed test report and study on visitor versus resident data speeds in Canada.