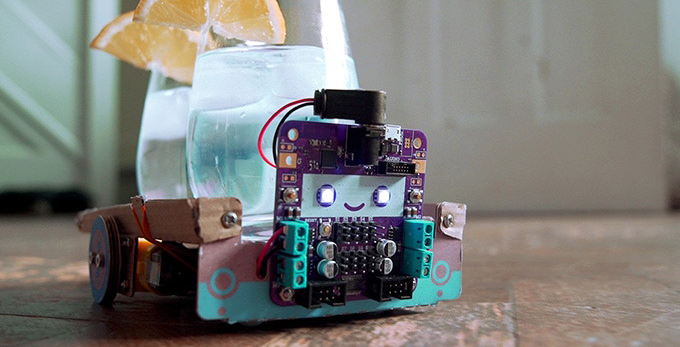 There are many DIY robot kits on the market, but few that are both inexpensive and make use of AI.

Smartibot, now available on Kickstarter, is one — and it doesn’t even require coding know-how.

The little cardboard bot works with the Smartibot smartphone app that either serves as a remote control or can be attached to the robot so it can control itself.

In this mode, the Smartibot app uses an AI called YOLO that recognizes objects including people, cars, dogs and bicycles, which allows for some interesting functions.

For one, you can request that the robot follow you around with tea, or you could tell it to follow your pet (as long as you’re ready for the subsequent attack).

When it comes to the remote control, you can customize the interface with a variety of drag-and-drop control elements — for instance, two sliders for left and right control, or a slider and a button for a water gun robot.

You can also customize what the robot is made out of, since the crucial elements are just the included electronics.

The basic Smartibot kit, which starts at $69 CAD, comes with one circuit board, two motos, one battery box and components and cardboard parts to make three types of robot — the basic AI robot, a ‘Teabot’ that has a flat top for carrying drinks, and a ‘Unicorn’ robot that essentially just looks like a unicorn.

If you’d like to delve into light programming, the team behind Smartibot is working to support Microsoft’s MakeCode platform, which is the type of block-based visual programming platform that looks a lot like Scratch.

If the Smartibot app lives up to its promises, this is a robot for all.

With only minor technical know-how, you can have the fun of assembling a robot and having it perform some complex and highly customizable tasks. If you want to get deeper into coding, that feature is on the way too.

And all for an extremely reasonable price.

This is the best value toy robot deal I’ve seen on Kickstarter (or anywhere, for that matter) for years.

Note: This post is part of an ongoing series titled Sticky or Not in which News and Telecom Editor Rose Behar analyzes new and often bizarre gadgets, rating them sticky (good) or not (bad).