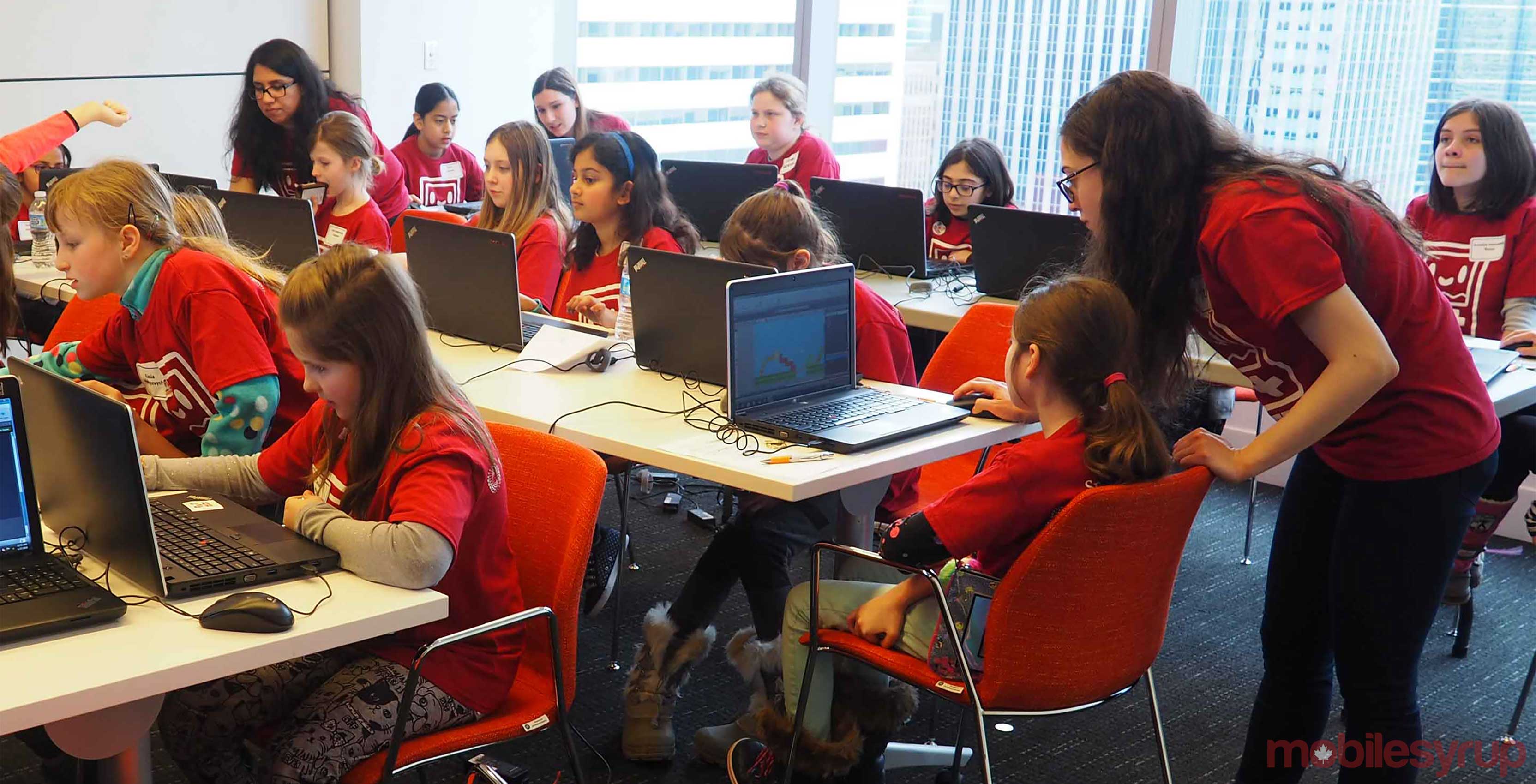 Video games benefit many things beyond entertainment, including innovation in other sectors and boosting a country’s economy. One area in which the gaming industry has traditionally faltered, though, is in its representation of women.

According to the Entertainment Software Association, only 12 percent of those working in the gaming industry are female, despite the fact that 49 percent of gamers are female. That’s to say nothing of the everyday treatment of those that are in the industry, perhaps best exemplified in cases like the 2014 GamerGate controversy, in which many women faced targeted harassment, including death threats.

While this might not be reassuring to young aspiring female developers, there are reasons to be optimistic, thanks to initiatives like Girls Make Games, an international program aimed at teaching and inspiring young girls interested in game design.

“There’s a huge stigma that’s one of the last remnants of how the industry has developed,” says Laila Shabir, founder of Girls Make Games.

“When it started out, it was gaming for everyone, but for some reason, as soon as FPSes [first-person shooters] started coming out, the culture changed around gaming. It started being very much targeted to boys, and when they entered the industry, they went and made more games that were interesting to boys, too. That’s a problem because when we talk about diversity in product, we need to talk about diversity in developers.” 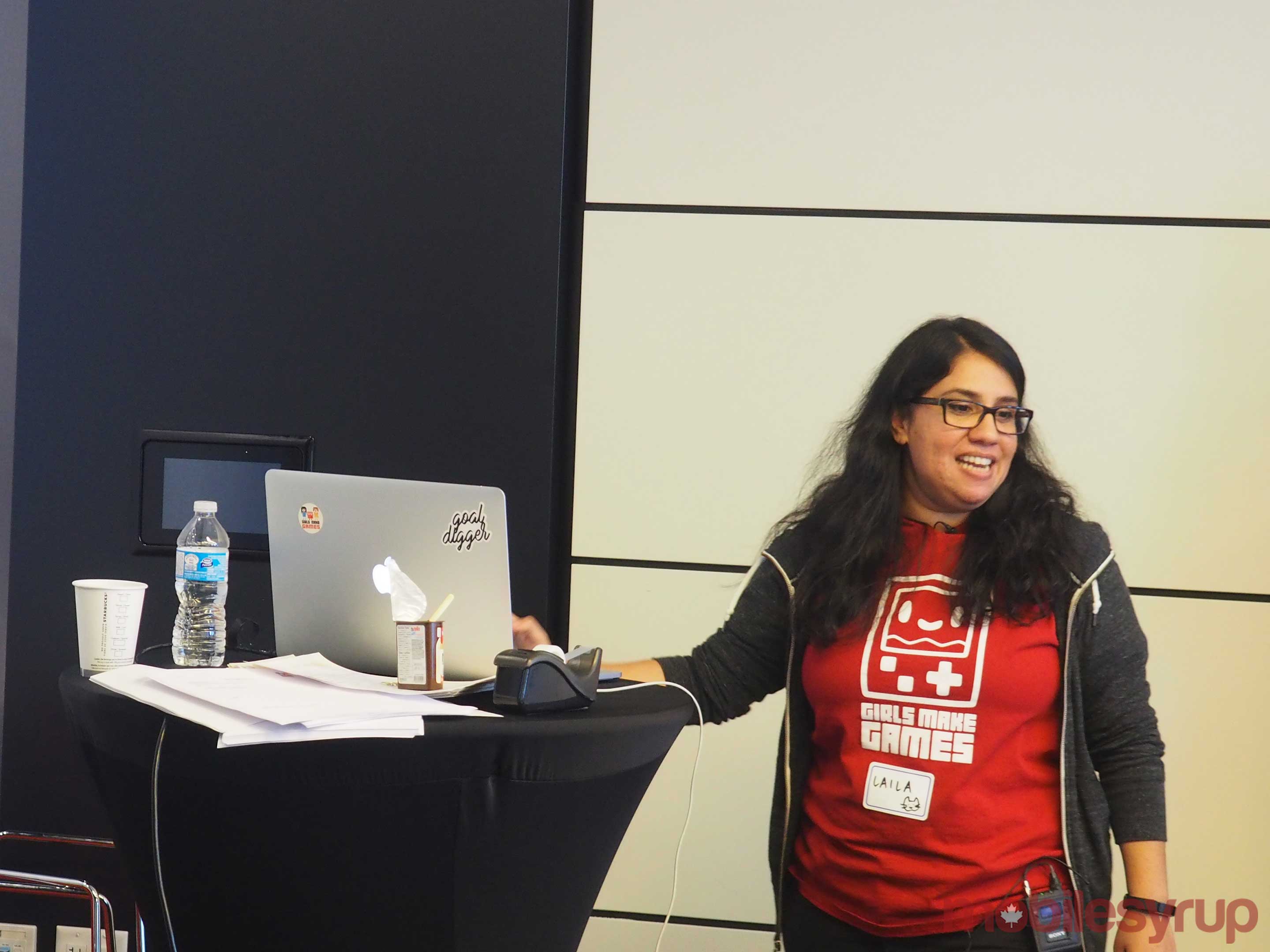 While Girls Make Games has travelled to dozens of cities around the world, including in the U.S., Asia and Australia, the program hasn’t ever come to Canada — until now. Between January 27th and 28th, girls aged 8 to 16 took part in a Girls Make Games workshop in Toronto sponsored and hosted by Thomson Reuters.

There, the girls were tasked with creating a Super Mario-esque 2D platformer using Stencyl, a video game development tool that allows users to create 2D video games for computers and mobile devices. While more advanced publishing tiers of Stencyl are available for purchase, the base platform is free to all users, making it easy for girls to play around with at home as well.

In the workshops, girls are taught basic coding skills, including how to create levels and environments. Leading them through this is Girls Make Games’ staff, a team made up of professional game developers, as well as students from top STEM universities like the Massachusetts Institute of Technology (MIT), Stanford University and Ontario’s own University of Waterloo.

While making their levels, girls are also challenged to come up with characters and stories, as well as add collectibles like coins or unicorns. 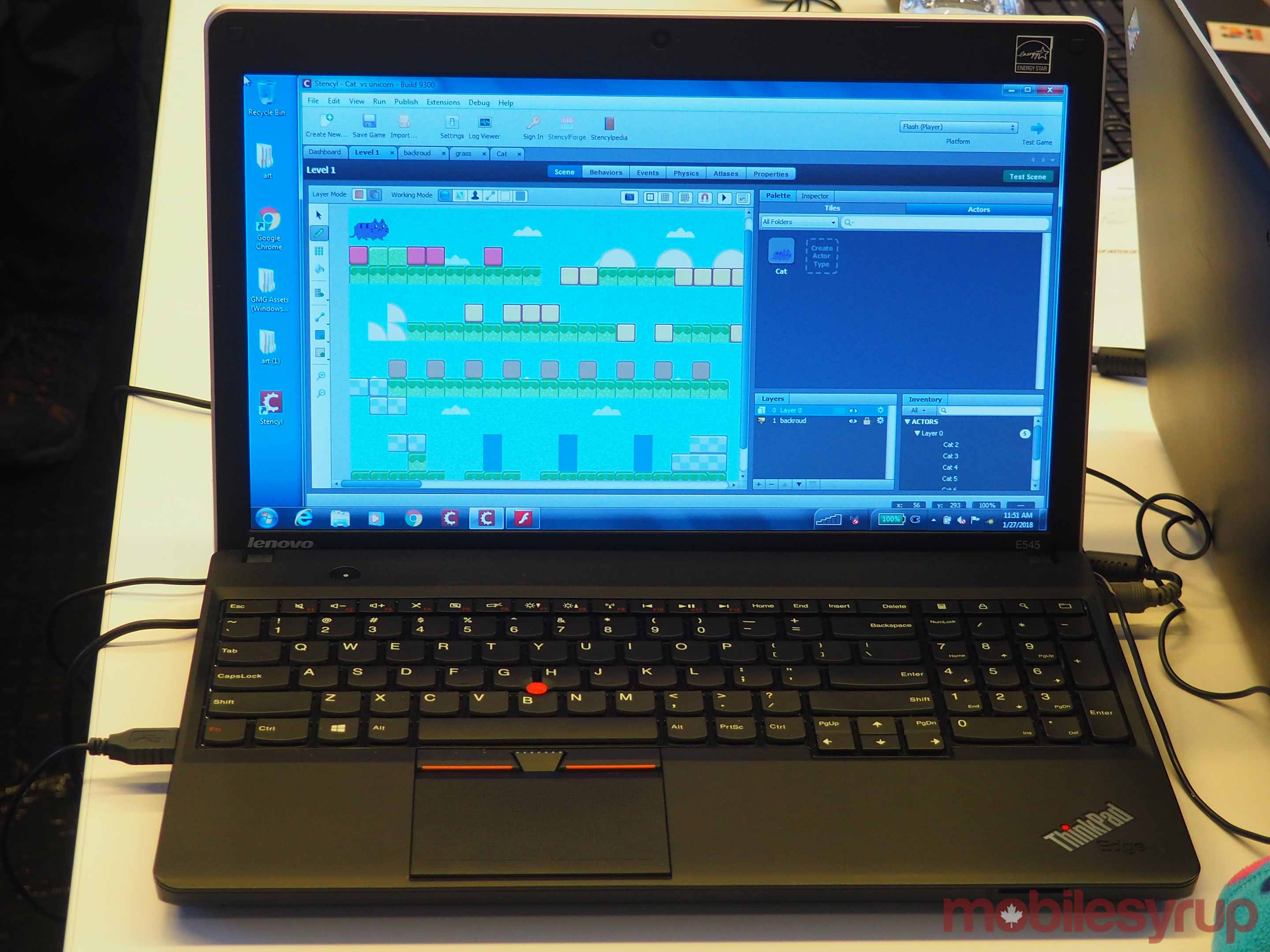 Above: An example of one of the girls’ games, built using the free Stencyl program

Afterwards, the girls are able to play through their finished games with instructors to get feedback and encouragement. They’ll even be able to download their creations through an app to play at home with their families on a phone or tablet, as well as use ‘gold’ awarded by the instructors to buy rewards like posters, pins and stickers on-site at the workshop.

For Shabir, the struggle to get into game making as a woman hits close to home.

In June 2013, Shabir and her husband co-founded the San Jose, California educational media company called Learn District, eager to share their passion for games with children. However, the pair quickly noticed that their applicants were almost exclusively male.

“When we were recruiting for our team, it ended up being really impossible to get women to apply — forget about even hiring,” Shabir says. “When I asked around, because I was new to the gaming industry, everyone told me ‘girls are not interested in this.’”

Being a gamer herself, Shabir wasn’t buying this, so in 2014, she kicked off the first-ever Girls Make Games summer camp. “I wanted to reach as many girls as possible and show them games and see what they think about games. As it turns out, they were already very game-savvy, playing on their phones and knowing about consoles and PC. It was nothing like what I was told.”

The problem, Shabir says, is that girls are often told that game development isn’t for them.

“That’s the sort of perception that a lot of girls have — that games are only for fun and this isn’t an industry that you can get into,” she says. “Introducing them to these concepts is really interesting because how can you think of a career if you don’t even know it exists?” 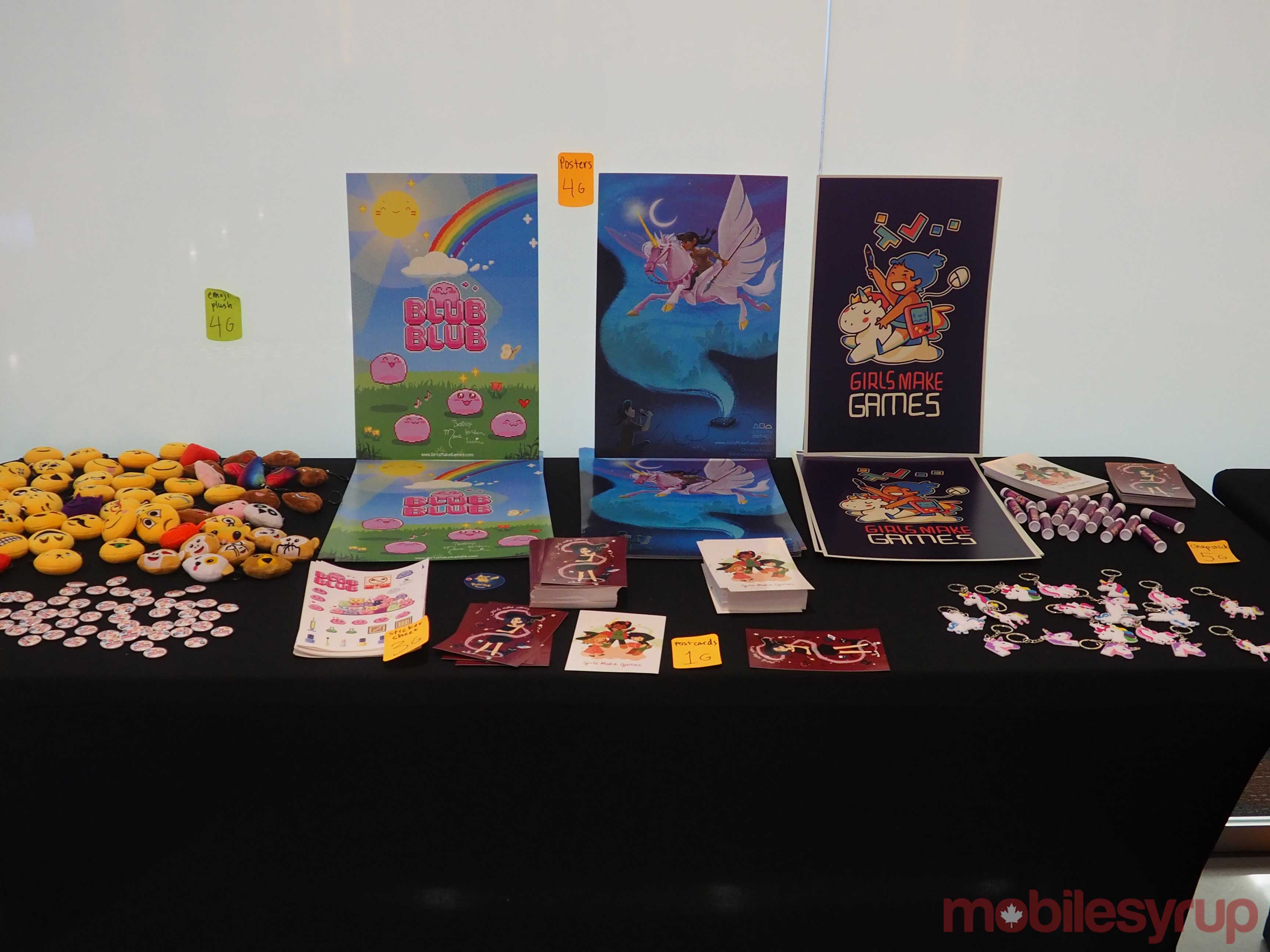 Above: Some of the goodies that girls can buy using ‘gold’ given during the workshop

But there’s more to the job than just knowing technical skills — Shabir points out that women often face sexism and other forms discrimination in the games industry.

“There are a lot of women who get into tech but the environment is too hostile so they leave,” she says. “We spend all this energy to get them ready to go there only to have them leave — we don’t want that.”

Girls Make Games is not only about addressing coding fundamentals, but the treatment of women in the workplace as well. She says there’s a pipeline that leads girls into STEM education (science, technology, engineering and math), beginning with building childhood confidence, exposing them to technology in their teenage years and culminating in mentorship and other support as adults.

Shabir hopes that bringing the girls into an empowering and inclusive environment will help them go into a traditionally made-dominated industry with more confidence and skill.

Most workshops, she says, have around 20 girls, with their largest holding around 40 — the Toronto workshop, by comparison, played host to 200 young ladies across the two-day period. 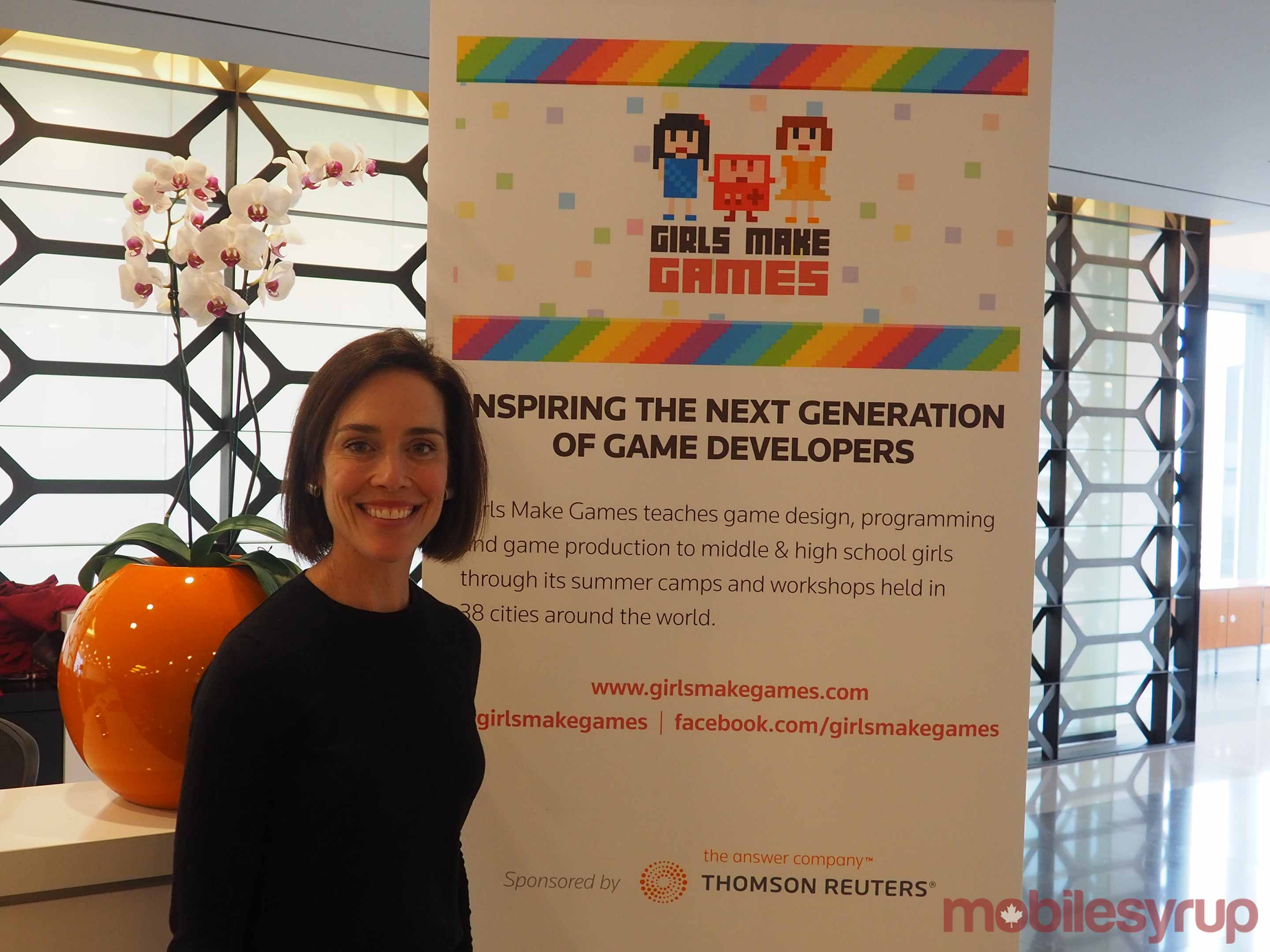 The Toronto event was made possible in no small part due to Katherine Manuel, senior vice president of innovation at Thomson Reuters, who originally discovered Girls Make Games on Kickstarter. After making a donation and reading more about them, she became fascinated with their work and reached out to get involved. Reuters had already collaborated with Girls Make Games three times before in the U.S. before the two women decided to bring an event to Canada.

For Manuel, Girls Make Games is a “real hook” to get girls into STEM education.

“We’ve reached them where their passion is, so if we can show them that it’s an entry point to understand the logic behind code and problem solving that code unlocks, they can take their creativity and imagination and make it come to life using technology,” Manuel says. “They’ll also feel like they’re part of a cohort of other young women that have a similar sense of what they want to do. I think keeping that team mentality really helps encourage them.”

And Shabir says it’s working, based on the response she’s gotten.

“There are so many women who write to us and say ‘I wish I knew about this!’ or ‘I wish this had existed when I was growing up, my life would be so different now!’” says Shabir. “Parents also call in to say their daughters told them ‘I found my people, I’ve never had these many girls [to game with].’ Because all of their friends are guys who play games together and go to coding camps together, and there will be this one ‘odd’ tomgirl. But then she comes to a camp like this and she meets 99 other girls and she’s just blown away because she didn’t think there were other girls like her.”

“When my aunt told me about [Girls Make Games], I wanted to know a little more about them,” says nine-year-old Lauren. “I love it because it gets girls interested in coding and making games.” She says getting to code on computers is also a fun change of pace from the iPad she usually uses for gaming. 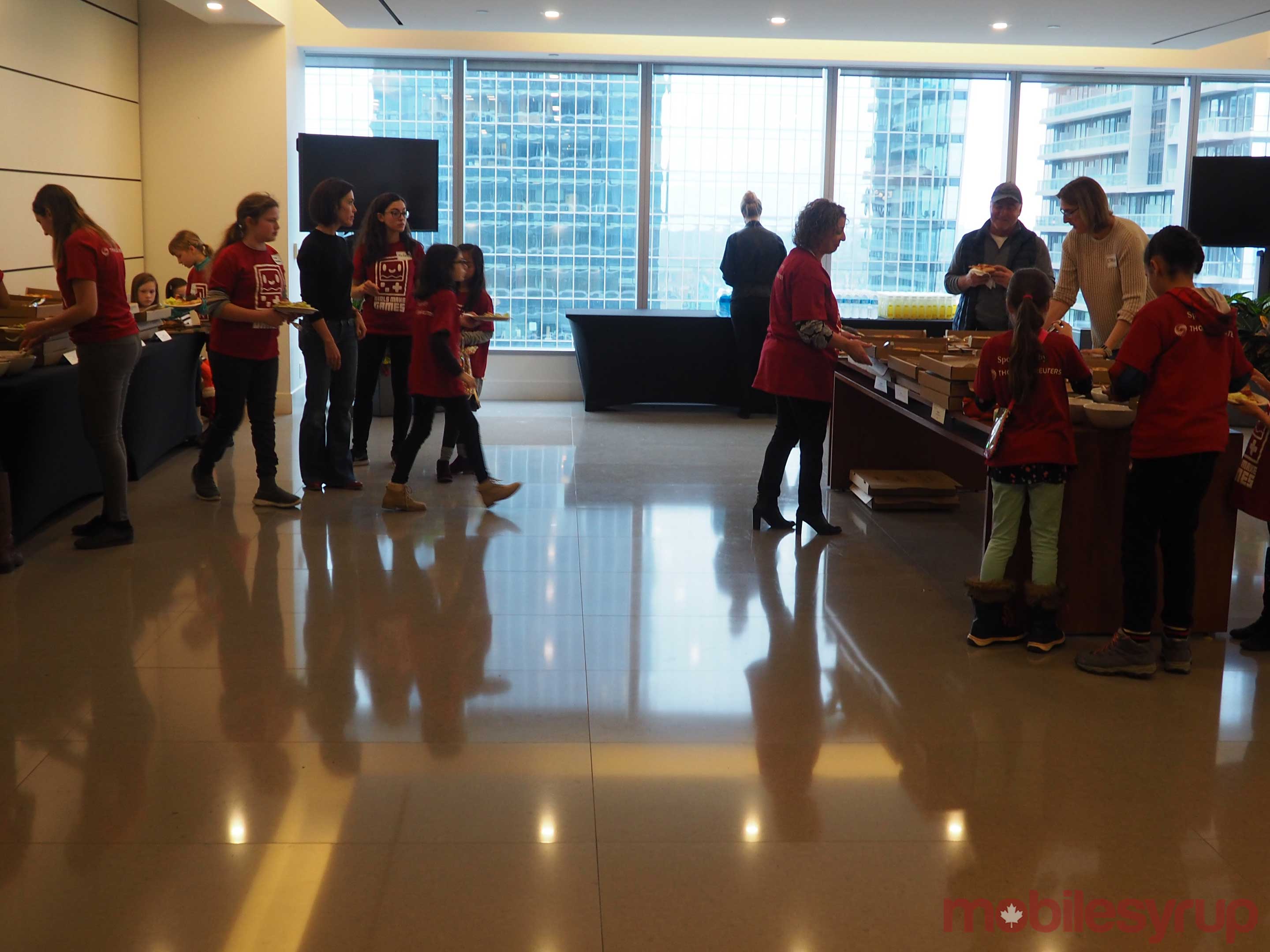 Above: The girls take a break to eat and socialize

Girls Make Games is also an opportunity for parents to get their kids involved in game making, especially when they don’t know much about the process themselves. “I think it’s important because as parents, my husband and I don’t know a lot about gaming,” says Jennifer Weinberger, whose daughter Ella took part in the Toronto workshop. “I thought it was a great opportunity to expose my daughter to a field that she otherwise may not have known too much about.”

Weinberger says she likes the workshops because they offer an educational setting that is both structured and engaging to girls like her daughter. “The whole [event] has been so well-organized — even from the start, all of the information was very clearly laid out, and when we got here, everyone was very warm and welcoming. There was a lot of energy and excitement in the room […] Kids were loving it.”

While there’s certainly a ways to go towards getting more women in the gaming workplace, Girls Make Games aims to continue to grow to help make that happen. For the first three months of 2018 alone, Girls Make Games has workshops planned in 100 cities around the world, ranging from countries such as the U.S., Australia, Afghanistan and the United Arab Emirates.

Annual summer camps, meanwhile, are set to take place throughout the U.S. and feature sponsorships by publishing giants like PlayStation, Xbox and Ubisoft. 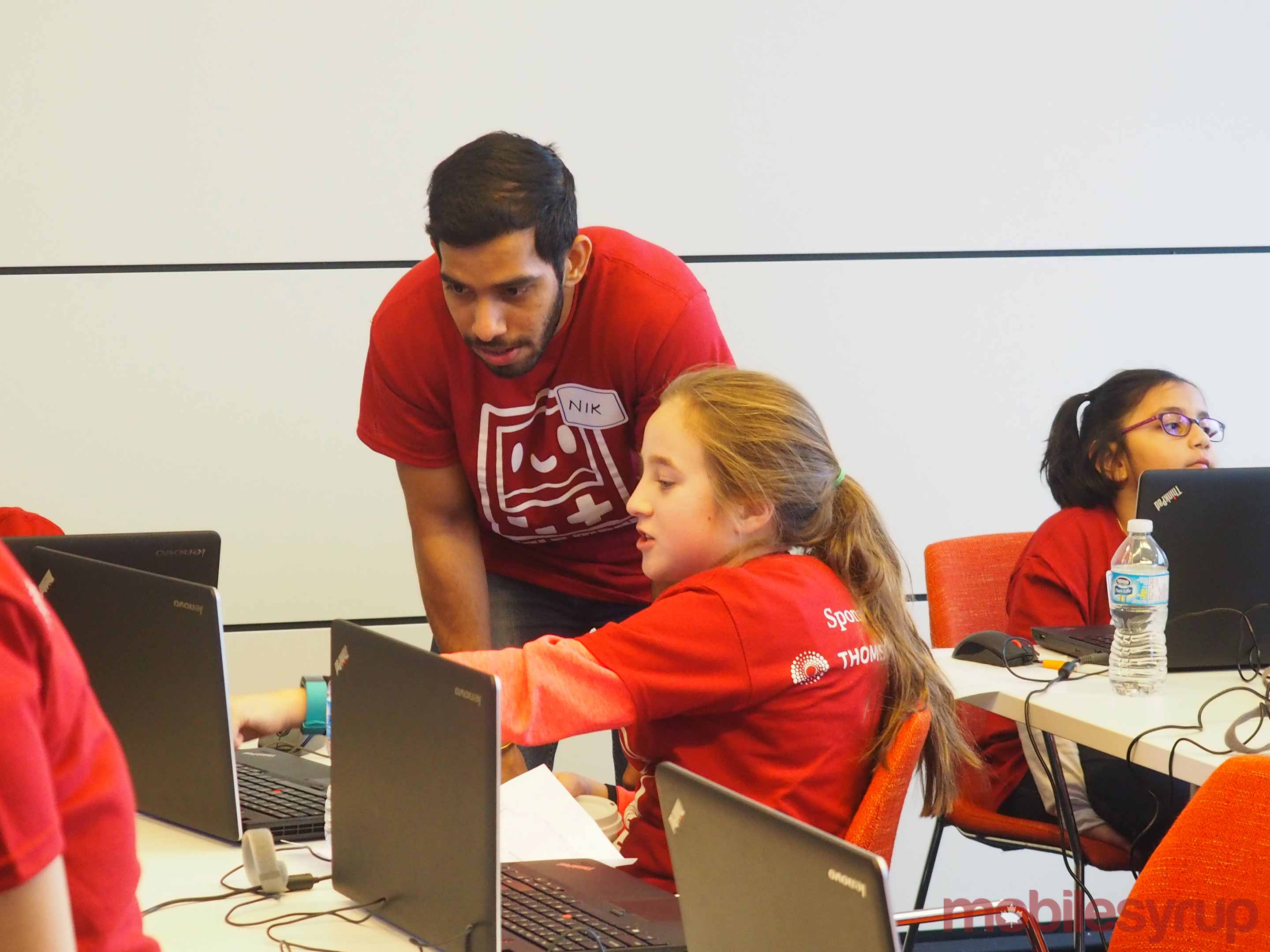 Above: Nine-year-old Lauren shows her game to an instructor

Girls Make Games doesn’t plan on leaving Canada out, either, especially given that it’s the third largest source of video game development in the world. Shabir says her team is already eyeing possible workshops and summer camps in Montreal and Vancouver, particularly due to Ubisoft’s significant presence in the former city. So far, Girls Make Games has already had a few companies reach out to express interest, and Shabir says she’s confident they’ll soon bring another event to Canada.

Because that’s what it’s all about, she says — bringing together like-minded people from as many different places as possible to help fight the stigma.

“There are people working everywhere, targeting girls in high schools and colleges, women in the workplace, and all the NGOs and organizations and companies that work with these different groups,” says Shabir. “But we need to do more. Everyone has to come together to be able to provide a holistic solution because the pipeline is leaking. It has to be a group effort.”