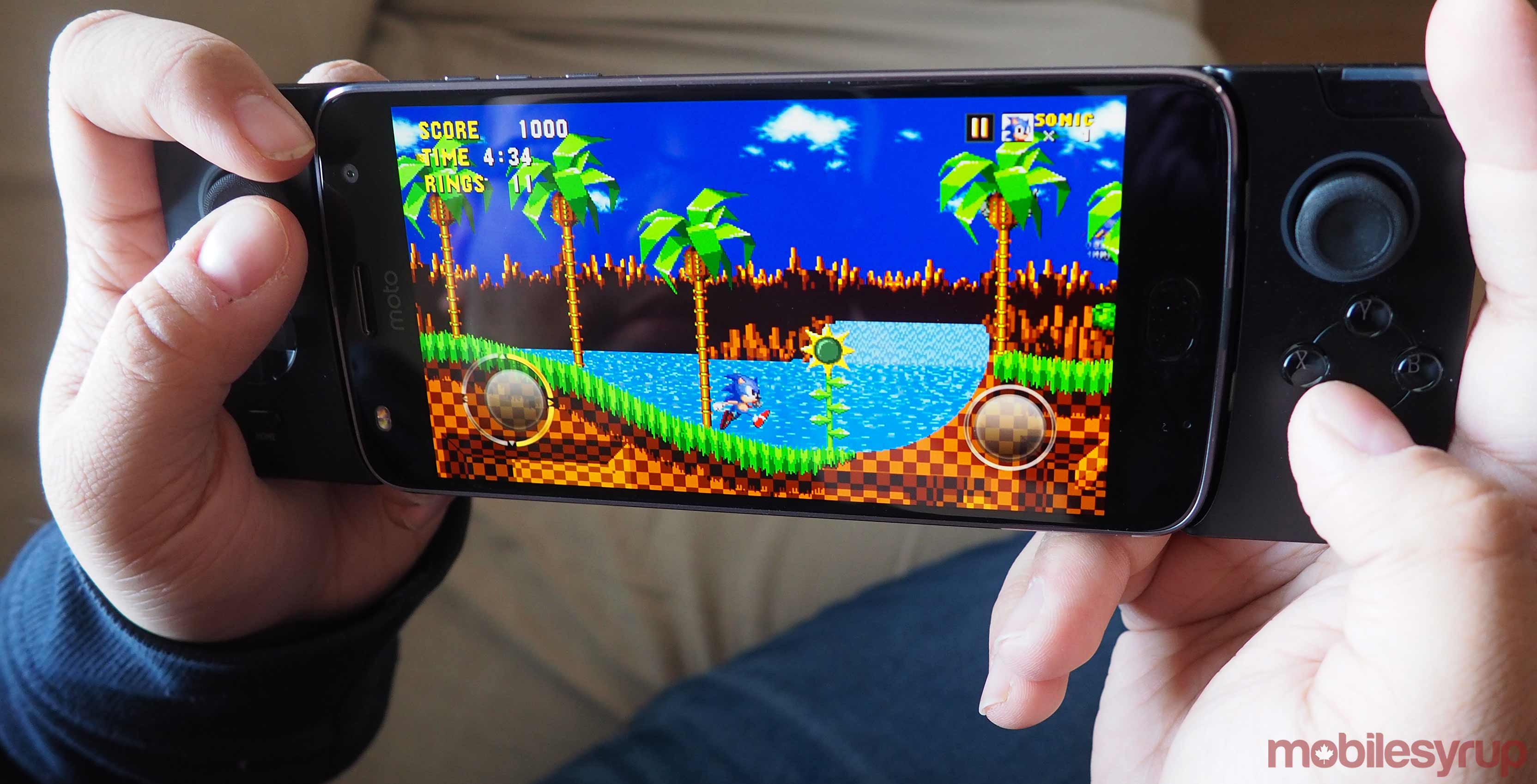 The appeal of smartphones as a way of playing games is that they offer an easy way to jump into all kinds of titles on the go.

With that in mind, Motorola aims to make things even simpler with the Moto Mod Gamepad, a Nintendo Switch-like accessory that turns your phone into a sort of full console-handheld hybrid. 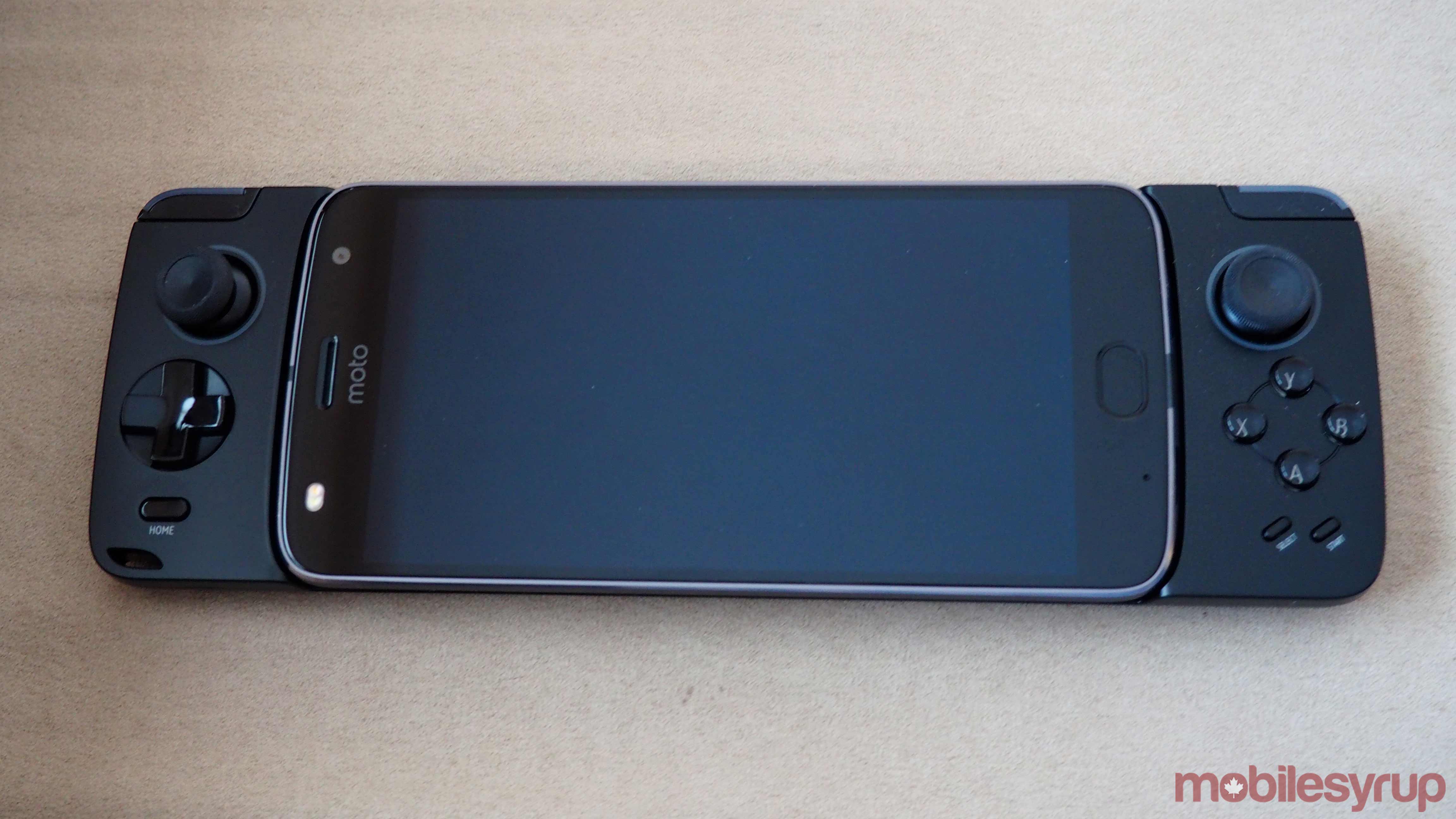 To start, the Gamepad is compatible with any phone from the Moto Z family, which unfortunately limits the potential audience for this device. That said, those who do have a Moto Z phone will find that there are a number of benefits to using the Gamepad.

For one, it’s incredibly easy to pick up and use. Simply attach the Gamepad’s magnets to the back of the phone and you’re good to go — no need to download any Play Store app. Moreover, because the Gamepad connects directly to the phone, Bluetooth pairing isn’t necessary, thus avoiding any potential input lag.

Specs-wise, the Gamepad features a 1035 mAh built-in battery that will last for up to eight hours on a single charge. At 140g, it’s also a light and well-built addition to your phone, feeling quite comfortable to use for any length of time. 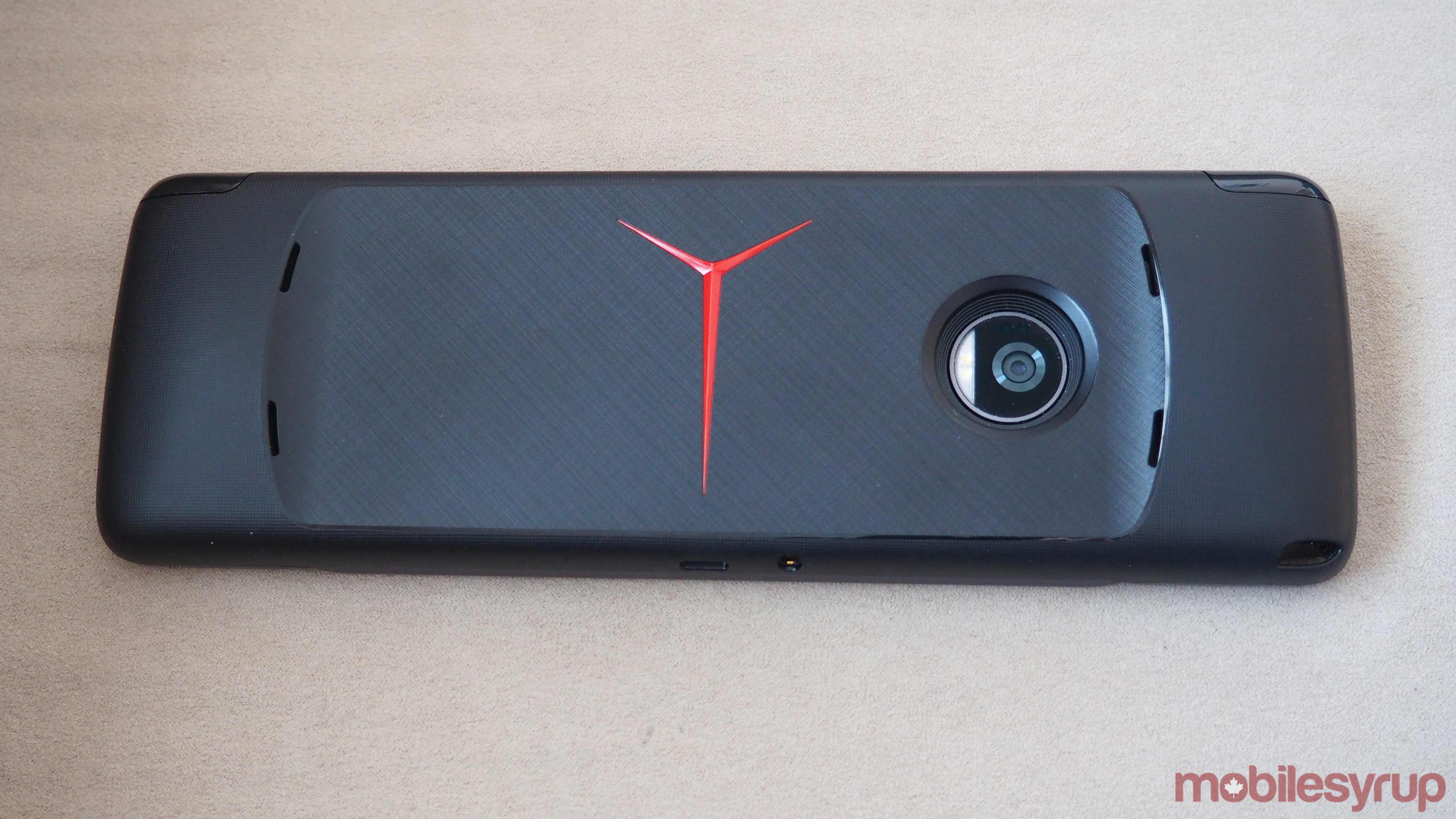 The Gamepad features all of the standard buttons you’d find on a game controller, from the analog sticks, four trigger buttons, four face buttons, a D-pad and start and select buttons. They feel surprisingly great, with the analog sticks being satisfyingly smooth and grooved like those found on an Xbox One controller.

As a nice touch, the logo on the back of the phone, as well as the edges of the trigger buttons, will also light up when in use. Finally, the Gamepad sports a large circular opening surrounding the camera, so you can always hop out of a game and take pictures as you would normally, if you so choose.

In terms of actually playing games, though, the Gamepad can be a bit of a mixed bag. 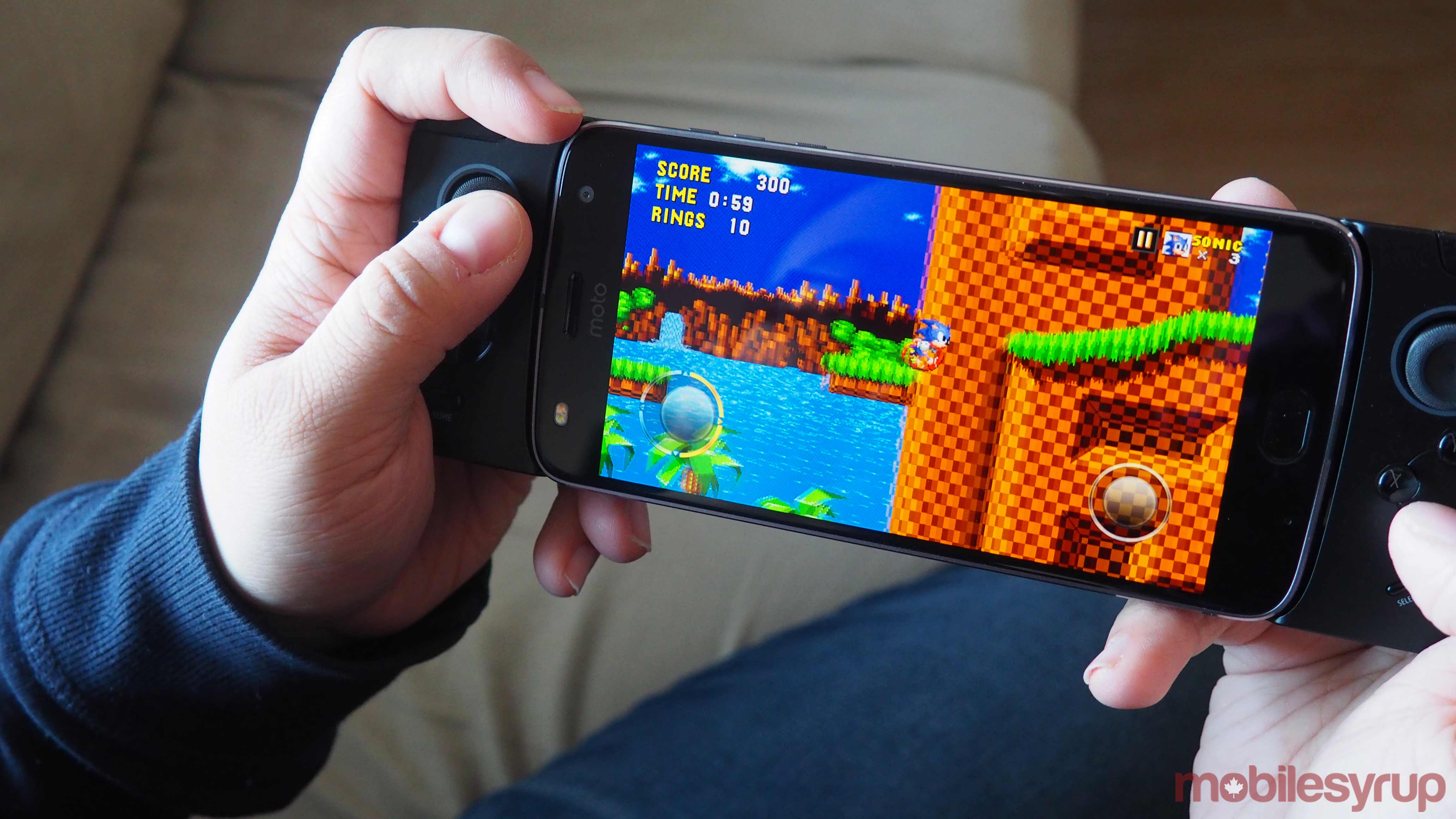 On the plus side, console titles that have been ported over to mobile work very well on the Gamepad. I played the first two original Sonic games and found that the Gamepad’s analog sticks and face buttons lent themselves far better to that ‘gotta go fast’ gameplay style than somewhat finicky touchscreen controls ever could.

Likewise, dual analog sticks and trigger buttons make playing first-person shooters like Modern Combat 5 feel much more intuitive. I was able to crouch, vault over cover, aim down the sights and throw grenades using a control scheme that would be right at home on consoles — an impressive feeling in a mobile game, to be sure. 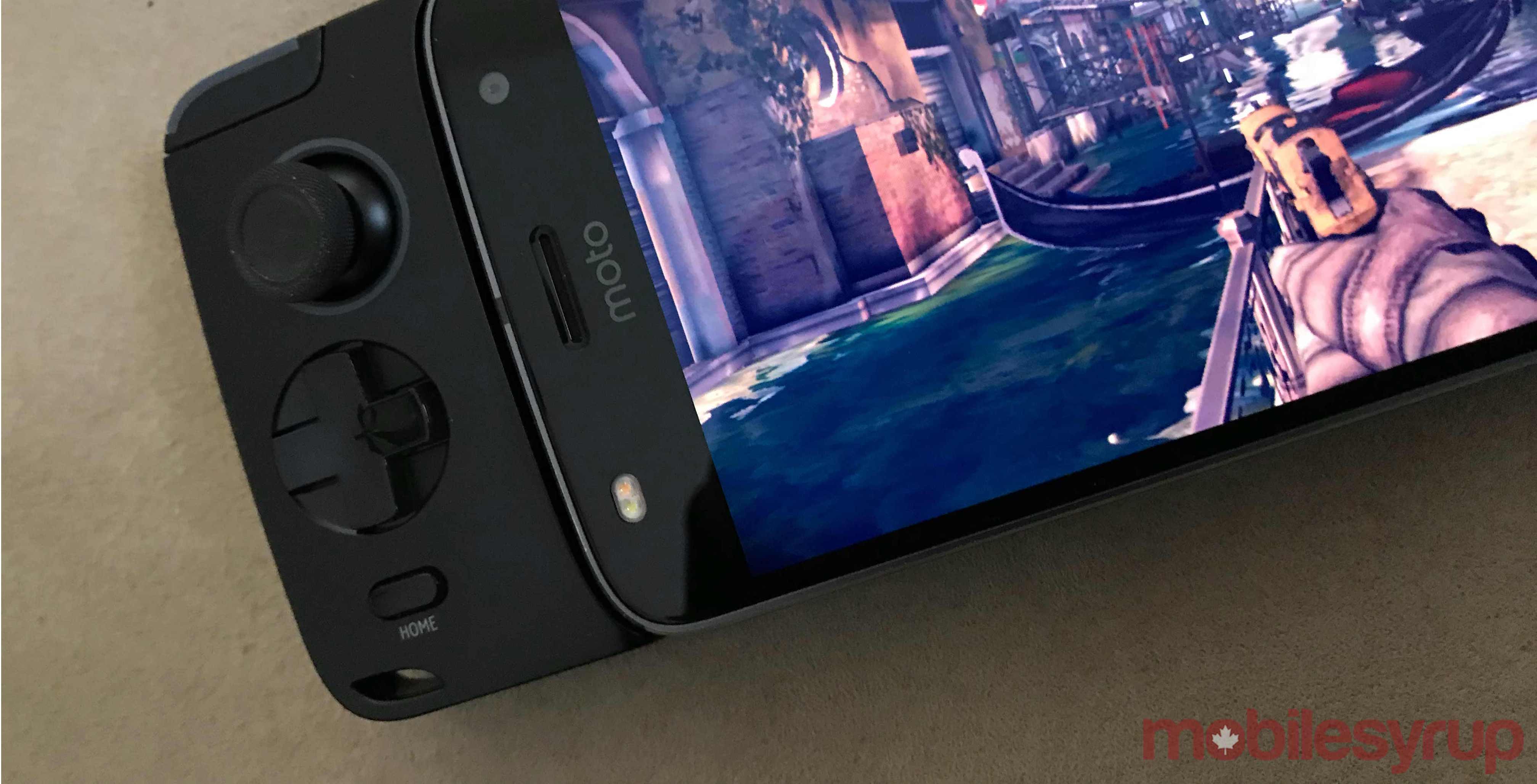 On the other hand, many smartphone games are already optimized for a mobile experience, offering simple touch tap-and-swipe controls accordingly. In those cases, using your phone on its own is likely to be a significantly more natural method of play.

Thankfully, to make it easier to find Gamepad-compatible games, Motorola is offering a free Moto Explorer app that shows all of the best titles for the Gamepad. Some prominent titles include Jetpack Joyride, Angry Birds Go!, Rayman Adventures, World of Tanks, Drag Racing, Telltale’s The Walking Dead and Batman series and several of the numbered Final Fantasy games.

Of course, the library increases if you use emulated games, though that may be a murky area for some (I haven’t dabbled in them).

Overall, Motorola’s Moto Mod Gamepad is a really solid accessory, but it most certainly isn’t for everyone. If you’re someone who heavily plays console-sized games on the go — be they from the Play Store or emulations — then the Gamepad would be ideal for you.

On the other hand, if you’re someone that dabbles in more casual mobile titles, then you’d likely be better off saving your money.

It’s worth noting that the GamePad Mod can’t be purchased directly from Motorola’s Canadian website. Instead, the site links to two sites — Amazon Canada, for $104.59 CAD through third-party seller biddeal, and Ingram, for $99.99.