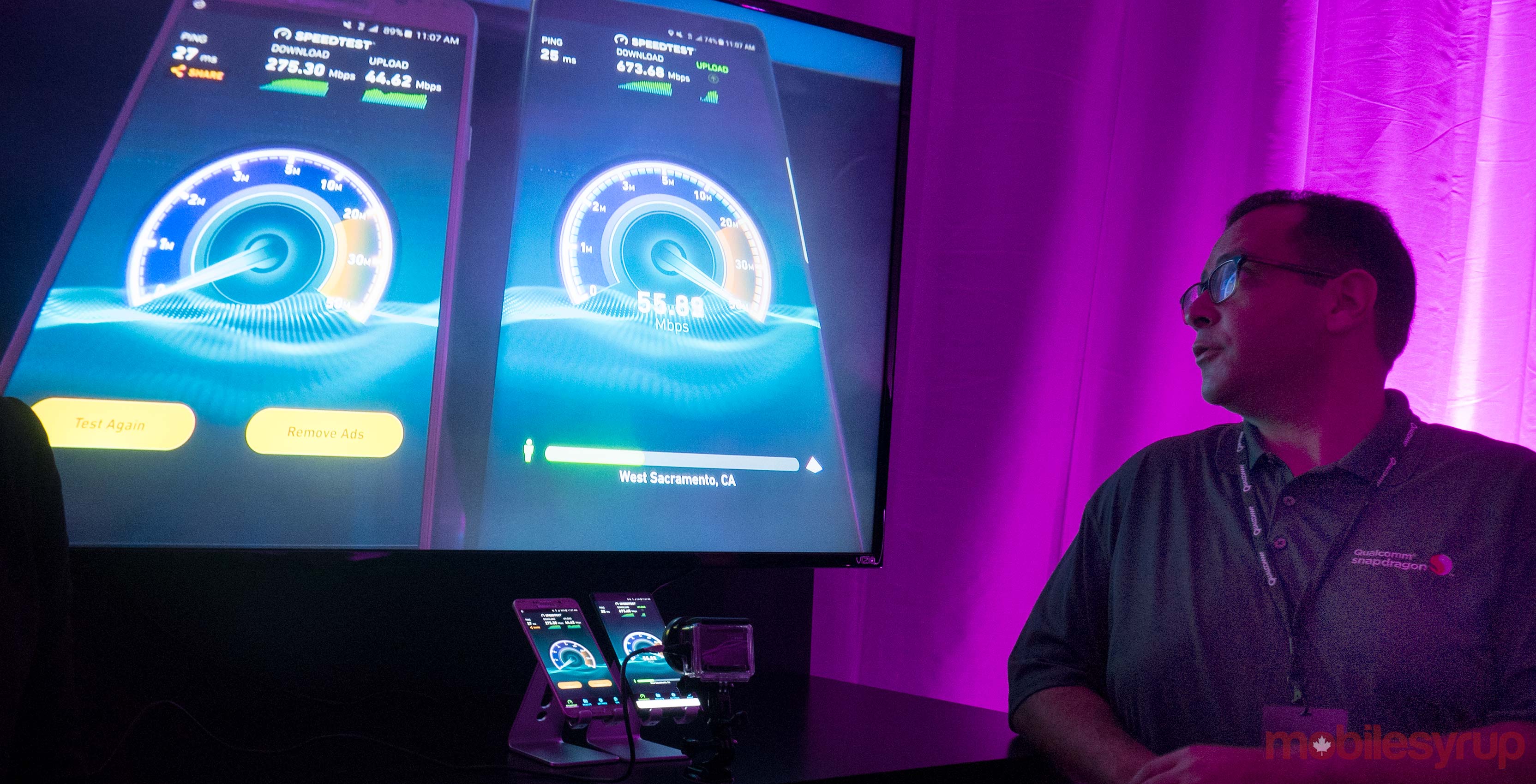 With so much focus on the 5G networks set to begin rolling out in 2019, it can be easy to overlook the developments still occurring in the 4G space — though not if Qualcomm has anything to say about it.

4G improvements, specifically gigabit class LTE, were the topic of discussion at the chipset and modem manufacturer’s joint November 9th event with T-Mobile. The two companies demonstrated wireless download speeds up to nearly 700Mbps through a variety of applications, including streaming VR video to multiple headsets simultaneously and showing how gigabit LTE devices can reduce network congestion for all users.

At the event, MobileSyrup got a chance to speak with Sherif Hanna, the principal manager of technical marketing for Qualcomm’s LTE and 5G cellular modems. We asked Hanna about the state of gigabit LTE — also known as LTE-Advanced — in Canada.

In response, he touched on Canadian innovation and covered topics ranging from helping carriers with less spectrum (think Freedom Mobile) through the use of License-Assisted Access (LAA) to how 4G and 5G will work more closely together than any past generation.

Read the full interview below.

Q: What is the state of gigabit LTE in Canada, and what partners are you working with?

Sherif Hanna: We work with all the carriers. We have relationships with all of them, we coordinate our chipset roadmap so that we can plan when the devices that have new features will come out. We also coordinate with the network equipment vendors who make the stuff that’s actually used by Telus and Bell and Rogers.

We have to coordinate with everybody, all at the same time, to make sure there is a match up between these technologies being deployed in the devices and in the network at the same time. 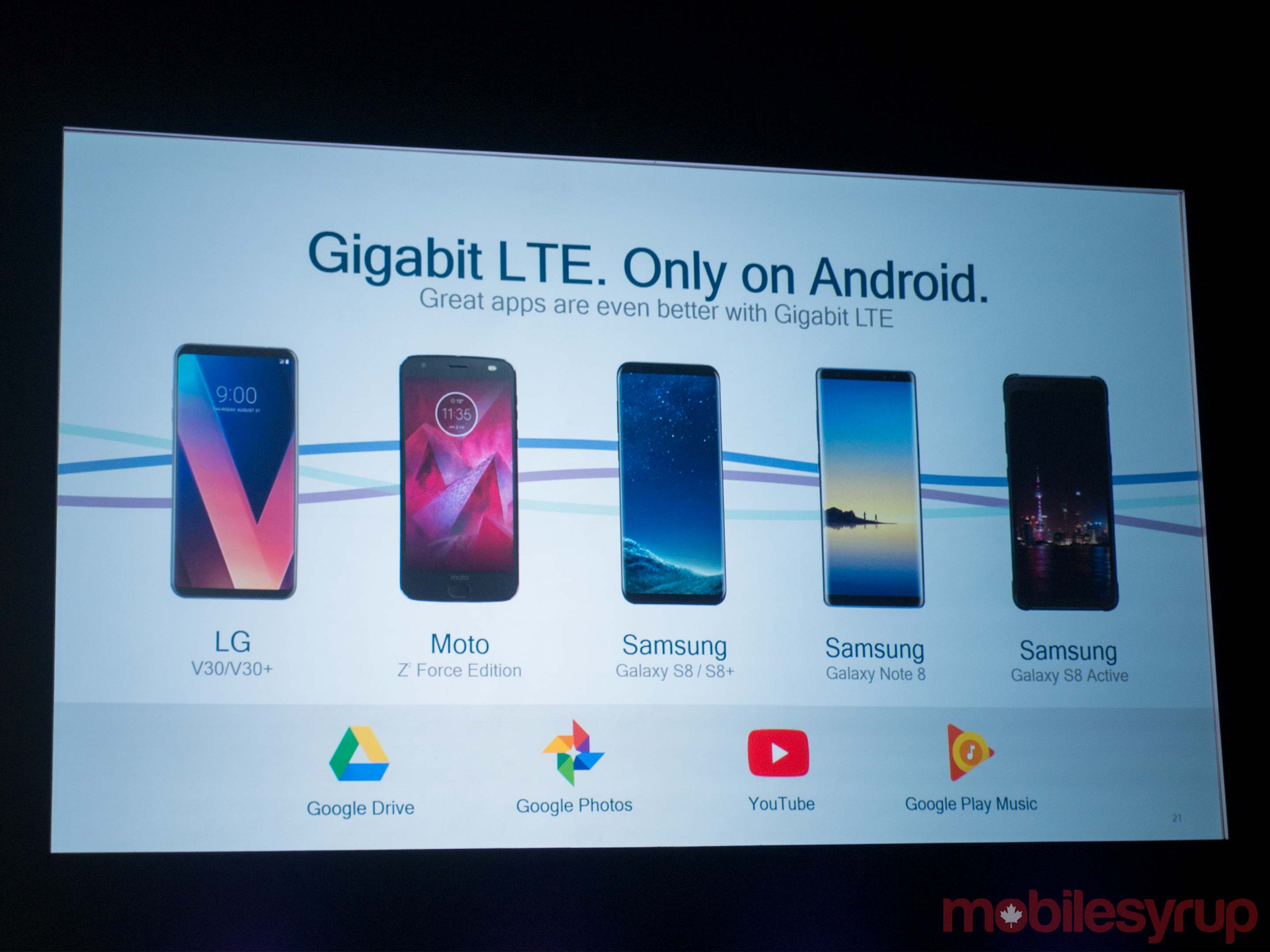 Above: A slide from Qualcomm’s presentation on gigabit LTE.

We’ve been working with all three major carriers in Canada on technologies like carrier aggregation, 4×4 MIMO, 256 QAM and actually, they’ve already deployed some of these features.

Canada has incredible speeds, I’m very jealous actually. In the urban areas, you get 270Mbps or 300-and-something from some of the testing I’ve seen.

Not every operator has the same spectrum position. Some of them have more spectrum, some of them have less spectrum. The reason we conceived of LAA was because we wondered: if you are an operator that, for whatever reason, you ended up with only a small allocation of spectrum, is there a way you can still increase the capacity in the network?

So, you will see operators with lower spectrum holdings actually resort to using LAA to increase the capacity of their networks.

Q: What do you think LAA could mean for Freedom Mobile, which recently spoke about its need for spectrum?

Hanna: I can’t speak to any specific plans for any operator, but I can say that we conceived of this technology specifically to help operators who are disadvantaged in terms of spectrum holdings. We turned a disadvantage into an advantage, in a way.

With LAA, you don’t have to pay a licensing fee because it’s unlicensed spectrum, anyone can use it as long as you abide by the regulations for that band.

It’s a small cell technology so you don’t deploy on the big towers, only small cells — which means you have very high density so actually you get really fantastically awesome speeds.

Q: Could you explain how the transition between LTE and 5G will work?

Hanna: What we’re doing in preparation for 5G is actually that we are continuing to improve our LTE roadmap to increase the speeds that are possible on the LTE network.

We started this year with 1Gbps, then next year it’s 1.2Gbps, but then we’re not going to stop there.

As 2019 rolls around and the first 5G networks come up, LTE will be even faster than what it is going to be in 2018 by a substantial amount actually, and the reason we’re doing this is to have a smooth transition.

The initial 5G networks will rely on the LTE networks to have the coverage. Imagine you’re a user with a 5G smartphone and you move outside of 5G coverage. If you go from 5Gbps a second to 50Mbps a second, that’s a huge drop in experience and it would be completely unacceptable… 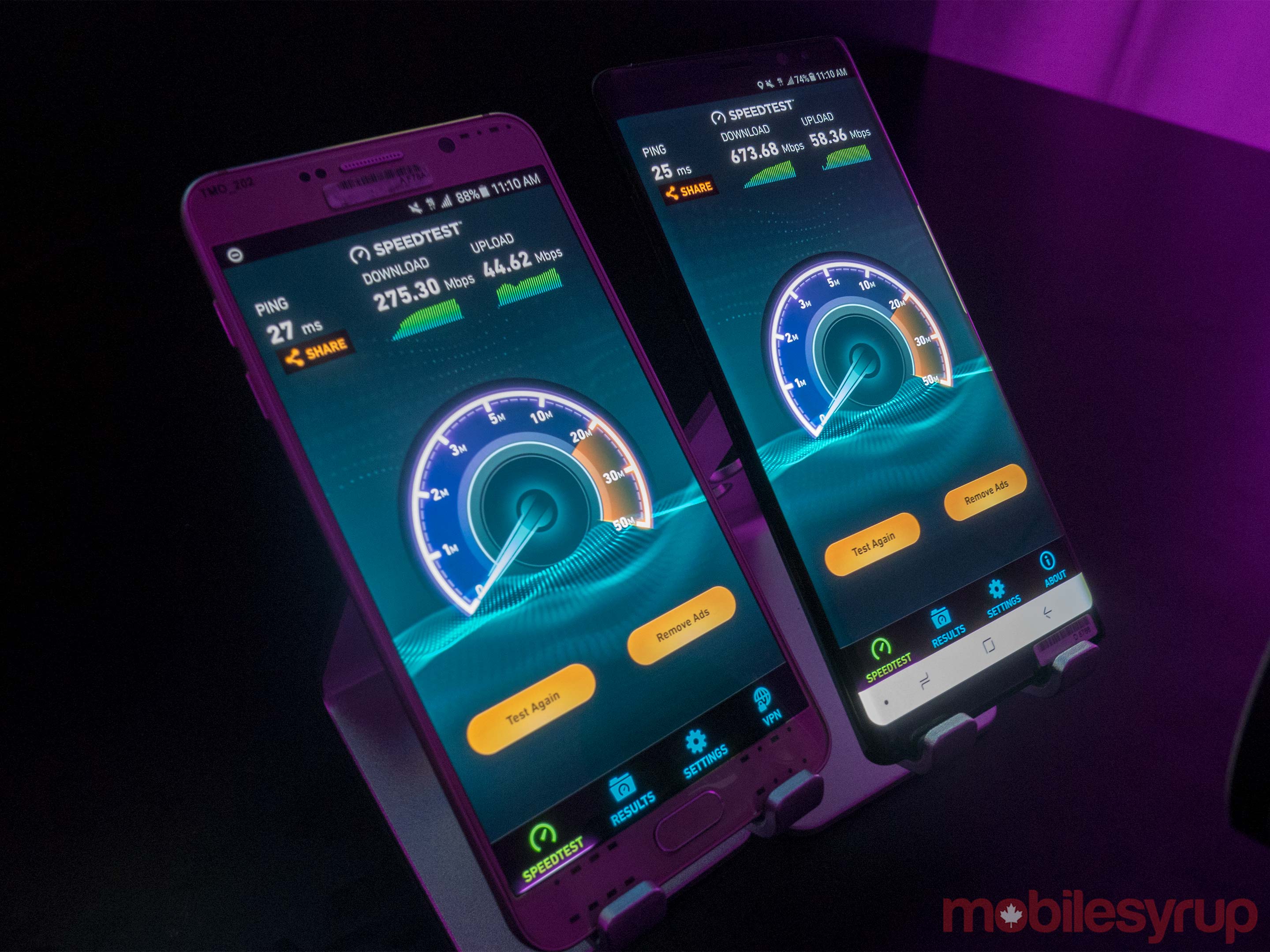 We’re continuing to upgrade the LTE network so that as the user moves off the emerging 5G coverage — because it’s not going to be available everywhere right away — that they transition seamlessly into 4G and they get an experience that’s comparable. Obviously, it’s not going to be exactly the same, it’s going to be a bit slower, but it’s not a complete cliff that they’re falling off in terms of user experience.

The other thing is, there’s even a tighter relationship between 5G and 4G than there was between 3G and 4G, in that transition. It used to be with 4G that if you are in 4G coverage, your phone was connected only to the 4G network and then it would connect to 3G-only if you moved outside of 4G coverage.

With 5G, what’s going to happen is that your phone is going to be connected simultaneously to both. It’s called dual connectivity. Especially with the first generation 5G networks, which will rely on the LTE network for some of the core work, the phone will be connected to both simultaneously.

You can actually even aggregate the speeds from both so you can get insane amounts of throughput, but, in the worst case scenario, even if the 5G signal is interrupted for whatever reason, the 4G signal is always there.

Q: When will the 3G network start getting decommissioned?

Q: How big are 5G phones going to be? Will they be much bigger than the ones we’re used to at first?

Hanna:: We already created a reference design, I held it in my hand, it was cool. It’s large, but it’s decent for the very first generation and that’s not a commercial product. Our smartphone reference designs are always a little bigger than what the commercial phones end up being, because you know, we don’t spend too much energy into minimizing the form factor since they’re just reference designs.

Hard to believe that I have the world's first 5G smartphone in my hand! ? pic.twitter.com/b180MawEyT

We’re going to try our damnedest to make sure the power consumption is good, that [the 5G tech] can fit in a typical-sized smartphone and there’s a lot of challenges before we can get there. Not just power consumption, but now we’re going to have add new sets of antennas for 5G that didn’t exist before… So there’s a lot of invention that’s going on right now with how to squeeze all that stuff into smartphones.

Over the next year, we’re going to start disclosing some of those new inventions that will make it possible… The first 5G smartphone should look not much different than some of the larger phones on the market now.

Q: Within an international context, where is Canada in terms of adopting gigabit LTE?

Hanna: I think Canada is doing great, I’m very proud actually — because I used to live in Canada. They’ve been on the leading edge of deploying some of these technologies, definitely for LTE-Advanced and when carrier aggregation was first rolled out, Canada was doing really well there and now with 4 x 4 MIMO and 256 QAM, also that’s going very well, which is reflected in the results from network testing that’s been going on. It’s good, and I hope they can keep the leadership to 5G as well.